My middle girl is an up and coming artist.  Truly.  She does some amazing drawings.  So for her birthday this year I decided to do an art themed party.  She wanted just a few friends to come over for dinner so it wasn’t anything fancy at all, but I did come up with an art themed craft for them to do, served the dessert on artist palettes and even created an art themed decor piece. 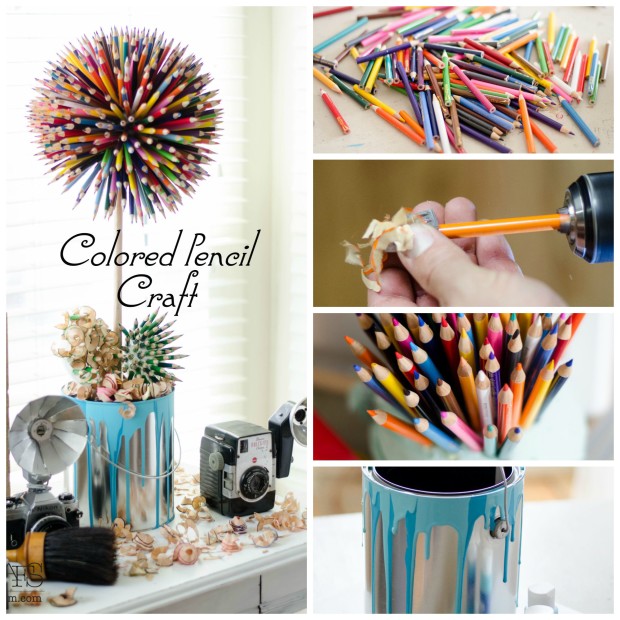 The idea for using colored pencils to make a round flower ball came to me because my daughters art medium is primarily colored pencils.  She uses the Prismacolor brand.  I bought her first box of Prismacolor when she was 5 or 6, after discovering she had some serious art talent.  I had a chat with an art tutor, and she told me the best thing at that age was to make sure she had plenty of options to work with and just let her go at it.  My sister had mentioned that Prismacolor pencils were really superior to other colored pencils, so we tried them, and we’ve never looked back.

I wanted to somehow put the emphasis on colored pencils.  I thought making a flower ball out of colored pencils might be fun, and surely it was doable.  I did take a stroll through pinterest to see if it had been done before – thought maybe someone had a tutorial or some tips but I didn’t find anything quite like this.

I did find my ideas for the artist palette dessert trays and the craft stuff from there though. 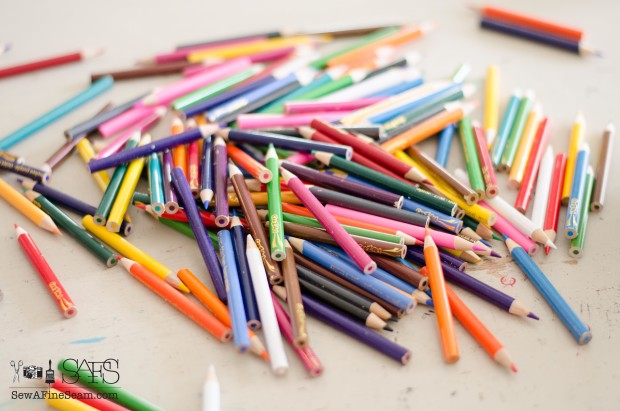 To make this Colored Pencil flower you will need:

A foam ball – I bought mine at Joann Fabrics

Colored Pencils – A LOT OF THEM!  the total amount will depend on the size foam ball you use 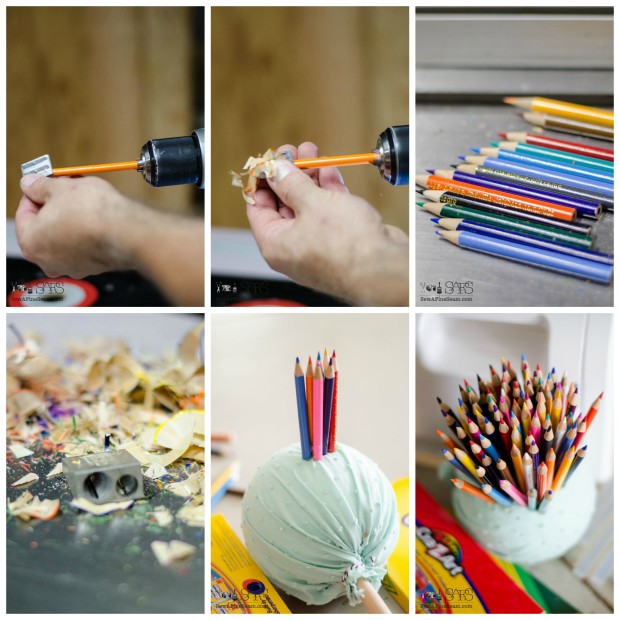 My Colored Pencil Flower ended up with at least 250 pencils.

I did NOT use prismacolor pencils 😀 I stocked up on the cheapest colored pencils Wal-mart carries during their back-to-school days.  We then cut all the pencils in half and sharpened the second pencil created by the cut.  While my hubby cut them on the table saw, I sharpened, using a power drill and a metal pencil sharpener.  Using the drill was so fast and it created really big, cool shavings.

I started by just sticking the pencils into the foam ball. And didn’t like the way it looked and the pencils didn’t want to stay in very well.  So I covered it with fabric and started hot glueing the pencils on. 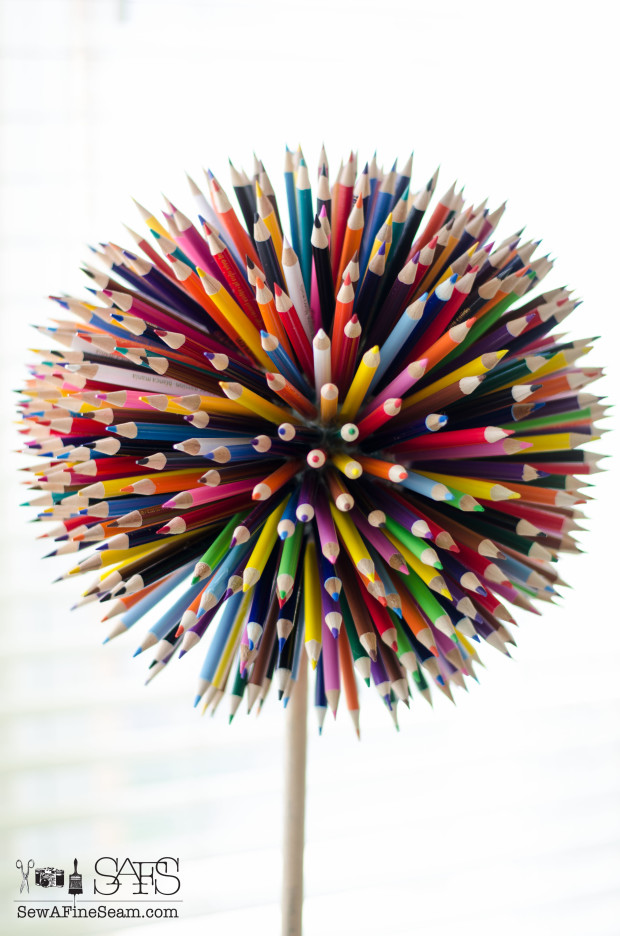 About halfway through, the pencils got heavy enough they were pulling the fabric some so I ended up cutting the fabric away and just hot glued to the foam ball.

I was afraid the hot glue would just melt the foam and make a mess but it actually worked really well.  I pushed the pencil with hot glue on the end, into the foam a bit, and the glue dried fast enough it worked.

Doing this over again I would:

Use a smaller foam ball.

Start out hot gluing right into the foam ball.

Not even bother with trying to create leaves for the flower. 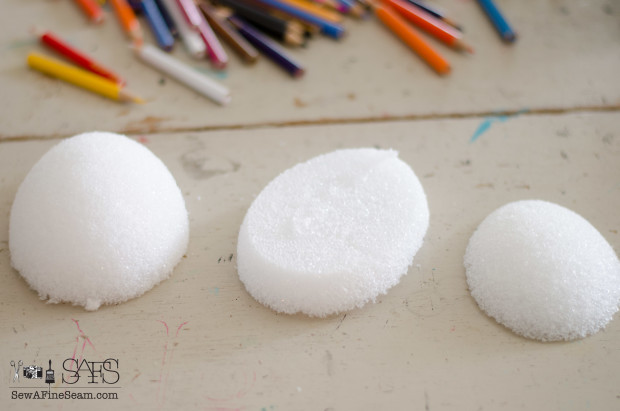 I had my hubby cut all the green colored pencils into 4 pieces, thinking it would be cool to use them to create a couple leaves for the flower.  I had an egg shaped foam piece in my stash from a few years ago when I bought it for another craft that I never got around to making.  So I pulled it out and cut it in 3 pieces lengthwise. 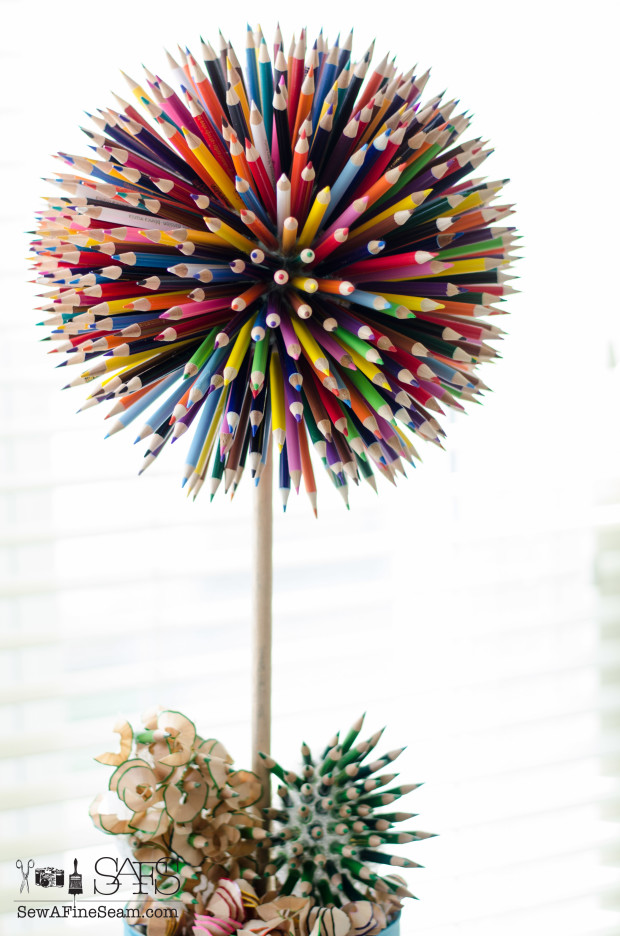 I glued the pencils to one foam piece and it took most of them for just one leaf.  For the second leaf I used the few remaining green pencils and filled in with green pencil shavings.  I’m not thrilled with the leaves but since I made them I added them to the ‘flower’.  I think the one that is all pencils looks more like a green porcupine 😀 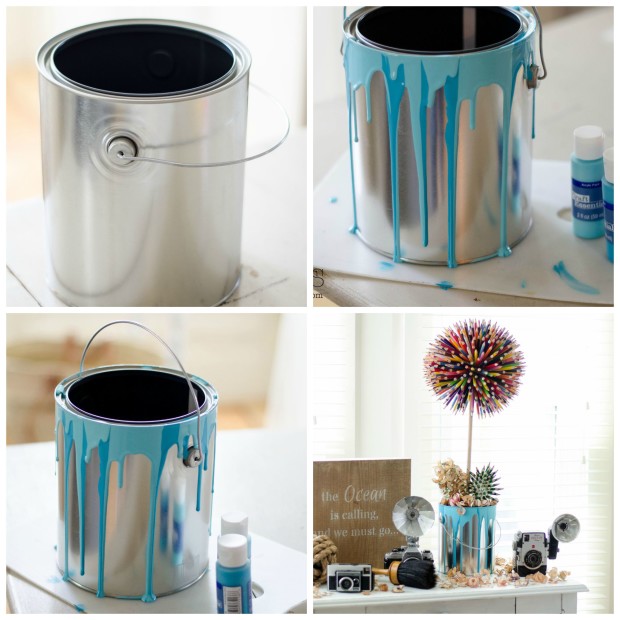 For the flower pot I bought a new, gallon paint bucket from Lowes.  I bought craft paint in a couple colors of blue.

With the bucket sitting on my paint palette, I poured paint around the rim of the bucket, making it thicker in some areas so it dripped down farther.  No science to this, just pour paint till you like the look.  Then let it set overnight, or until the paint is thoroughly dry. 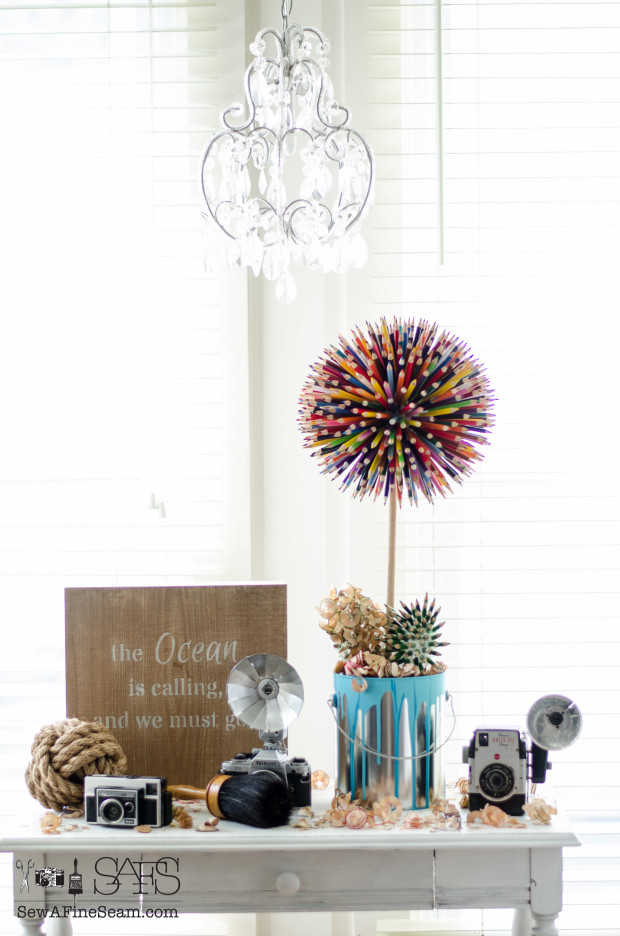 I hot glued the dowel rod to the bottom of the paint can and then stuffed crumpled, heavy brown paper all around it to keep it upright.  I’m sure there are other ways to attach and keep the dowel rod in your container but I had the paper on hand and it worked.  I then piled the curly pencil shavings on top of the paper to cover it up and create a cool, artsy look.

Now.  You wanna know a secret?

Of course you do – everyone likes secrets! (when you get to be in on it that is 😀 )

The pencil flower ball is not a complete pencil ball.  The back is empty. 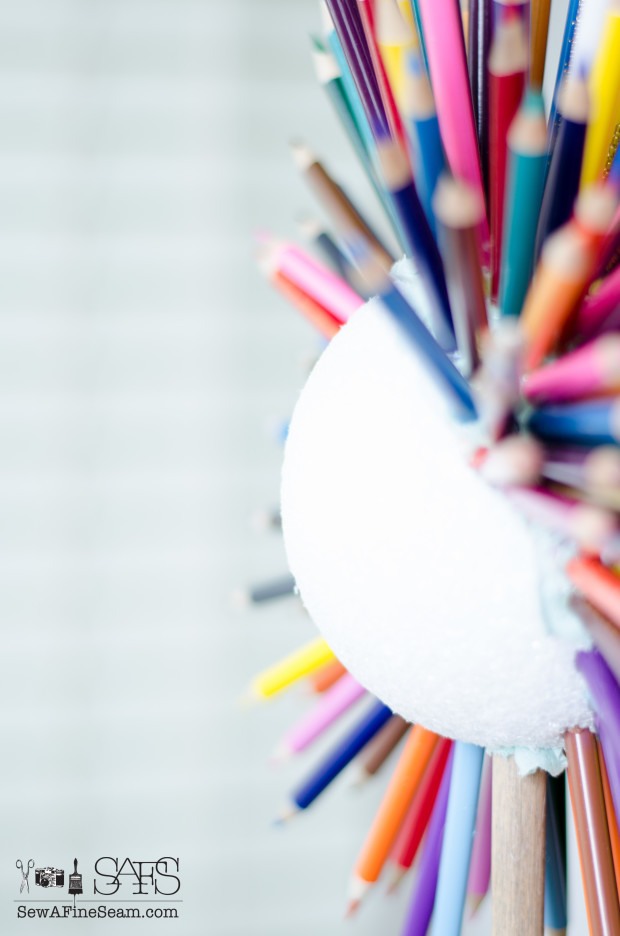 I didn’t set out to leave this unfinished.  I wanted the whole ball covered.  But 250 pencils in and I had to call it quits.  250 pencils means 500 – FIVE HUNDRED!!  😯  that I glued on.  My hubby thought I had spent enough money on colored pencils that were just going to get glued to a foam ball.  And he was tired of cutting them in half for me.  And I was too lazy to hand cut them all myself.  And I still have to learn to use the table saw.  Although even if I did use the table saw myself I’m not sure I’m brave enough to cut colored pencils in half.  You see, I’m rather prone to cutting myself with a knife.  A table saw?  I’d probably lose and arm and a leg somehow – eeek. 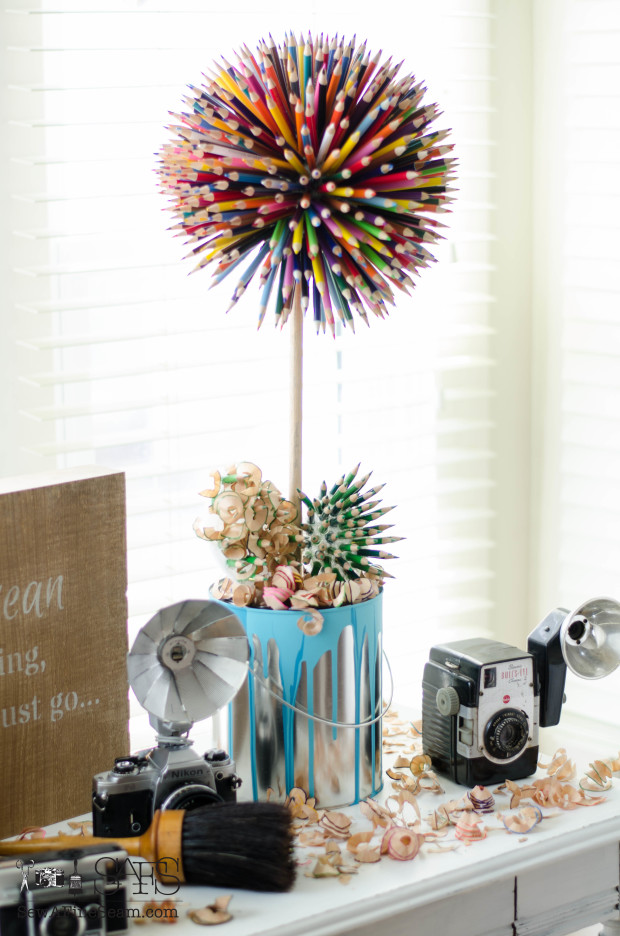 Anyway.  The foam ball is not completely covered, which meant I couldn’t use it as a centerpiece on the table as I’d planned.

Time for plan B.

Since it looks like a complete ball from the front and even pretty far around the sides, I created an art-themed vignette in the nook off the dining room.  Some vintage cameras seemed artsy, and the brush, though not really an artist brush, looked cool too.  ‘The Ocean is calling’ sign I made myself so it’s sort of art/craft too right?  I liked it, my daughter liked it, so it’s all good. 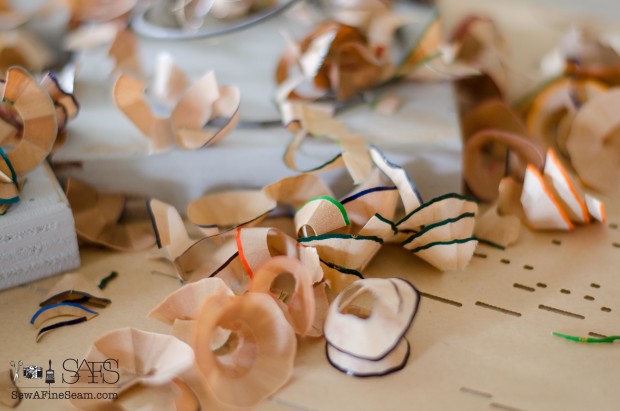 The pencil shavings were so cool I couldn’t throw them away.  I ended up adding them to the vignette and down the center of the table as ‘confetti’. 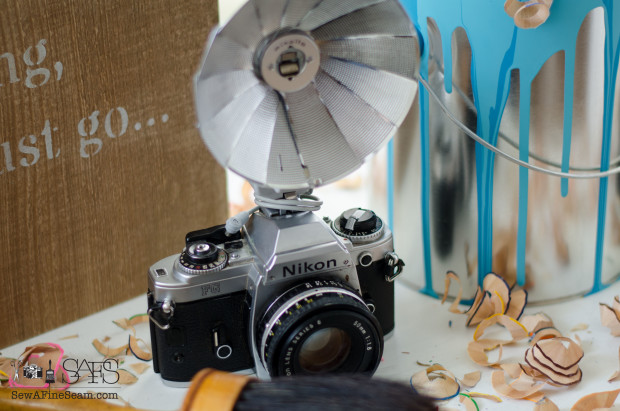 So what do you think?  Would you consider making a Colored Pencil Flower Craft like this?

Sign up for all the Strawberries and Cream from Sew a Fine Seam! (discounts, news, product launches, info and more!)
« Rusty Hairpin Legs Saved from the Landfill
Fall Home Tour 2015 »