Maybe it won’t seem exactly flower shaped but I couldn’t think what other shape to call it – it certainly isn’t square or round or rectangle 😀  So a flower shaped ottoman it is – and I made not one, but 2 slipcovers for it. 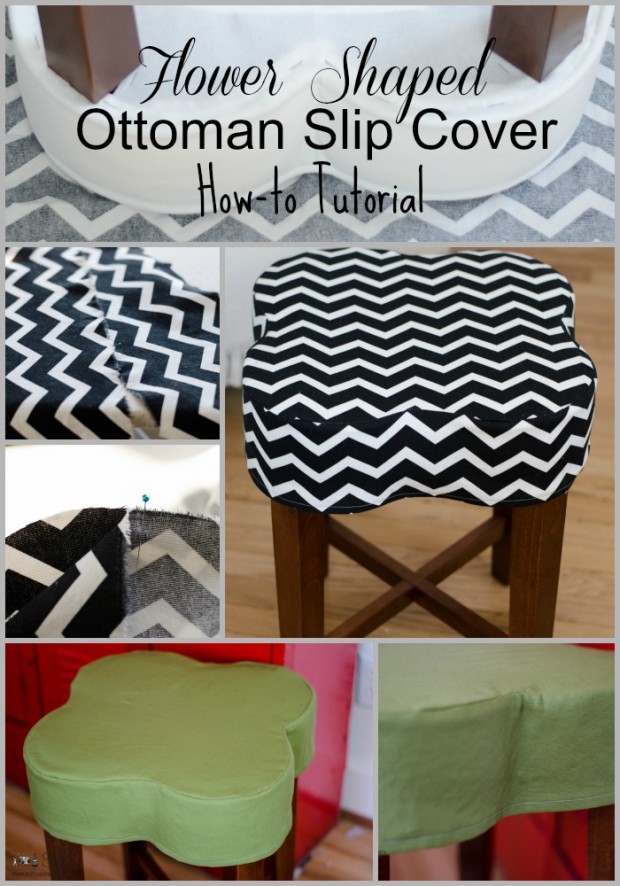 Technically it isn’t even an ottoman, but that fact didn’t really make it’s way to my brain until the photos were all named and the collage created and the text added and the post was already well under way.

So even though it’s really a small stool for a bedroom vanity, I’m calling it an ottoman in this post. 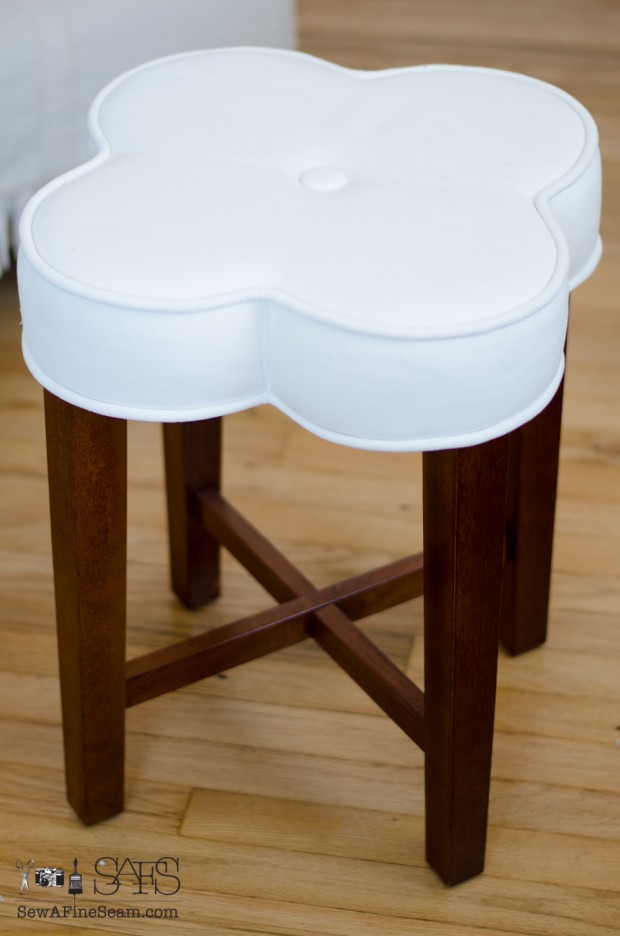 My friend and neighbor bought this to go with her teenage daughter’s vanity.  It’s a new little stool/ottman and there’s nothing wrong with the cover – it’s quite pretty but not overly practical for use at a young teen’s vanity.  So my friend and her daughter picked out some fabric and brought it all to me to give it some covers to help keep it clean.

And a cover can always be tossed in the washing machine and washed all clean! 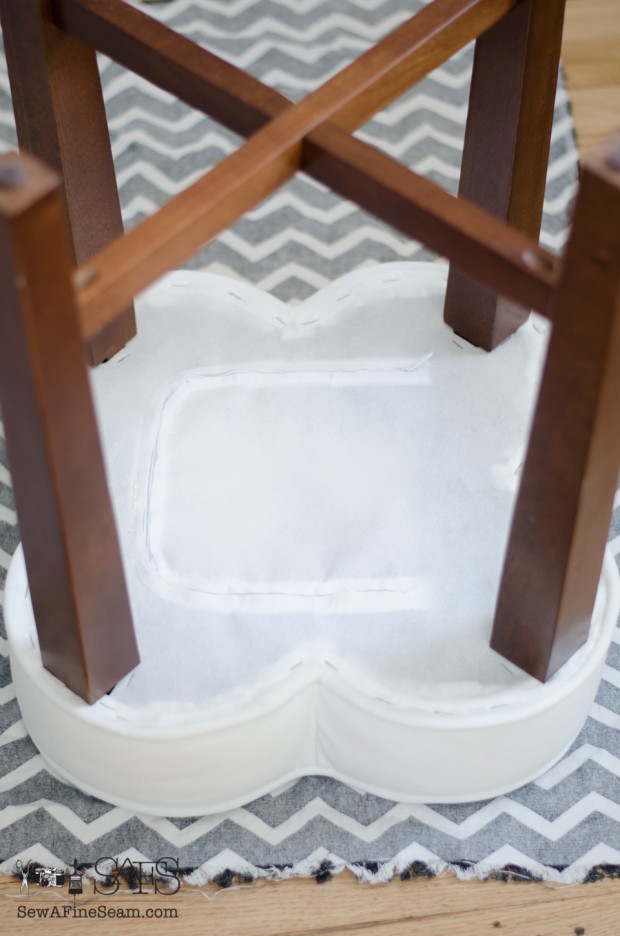 I shrunk both pieces of fabric – you simply wash and dry fabric in the washer and dryer to shrink it.

To begin I placed the ottoman upside down on the fabric and traced around it.  I cut out what I had traced, adding about 1/4 and inch for seam allowance.  I don’t add a lot for seam allowance as I like my slipcovers to fit snugly. 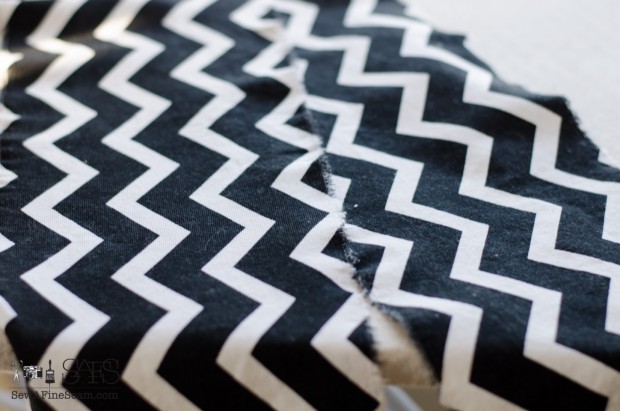 To create the side piece of the slipcover I first tore the fabric across the long edge to get a nice straight line.  Then I measured the width of the piece to match the width of the seat side I needed to cover, and added 1.5 inches for a hem allowance and for a bit of overhang. 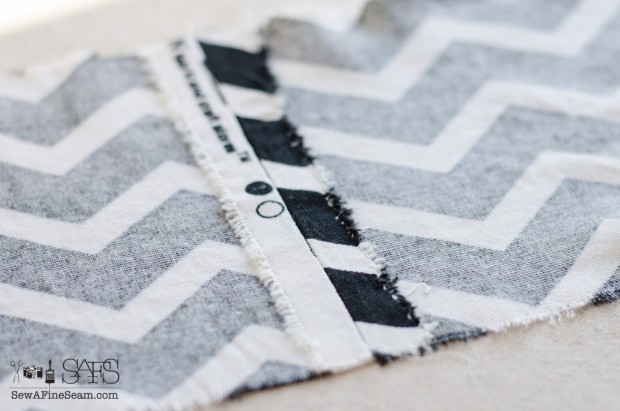 I needed more than one strip so I tore two strips and sewed them together to create one long piece.

Since the edges I sewed together were selvages I didn’t need to finish them – I simply pressed them open.

Had those edges not been selvages I would have serged them to finish those edges. 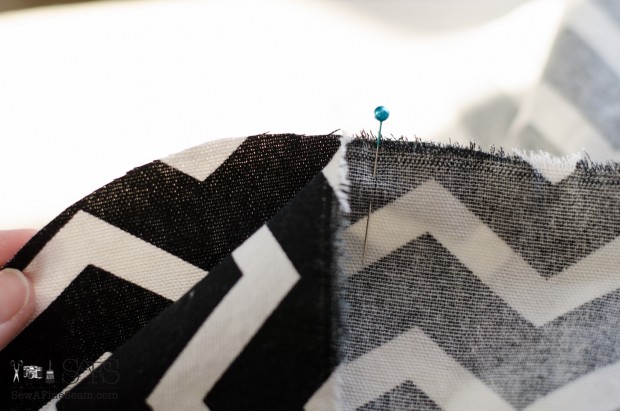 Next I pinned the straight side piece to the flower shaped top piece.  The curves of this piece were large and gradual, and the fabric wasn’t too heavy or stiff, so I was able to just ease the straight piece to the curved piece without having to make clips in the fabric or causing it to pucker. 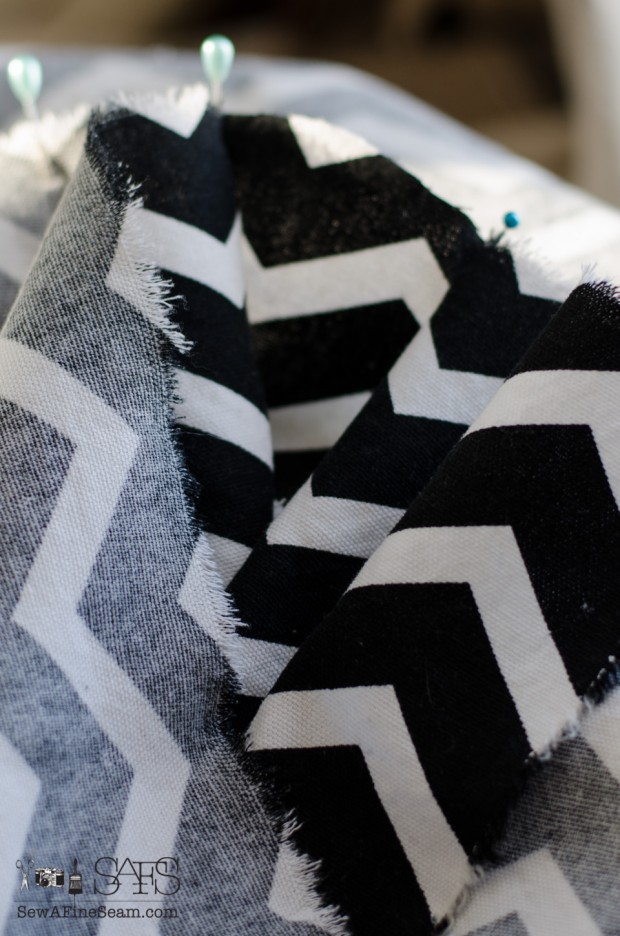 Now I’m not big on doing a bunch of figuring that might include a math problem or worse – involve some sort of algebraic equation.

I passed Algebra and Geometry and I don’t really want to relive either one.

So instead of doing any measuring or figuring on how long the side piece needed to be I pinned it on all the way around and then left an opening of about 4 inches.

I sewed everywhere I had pinned. 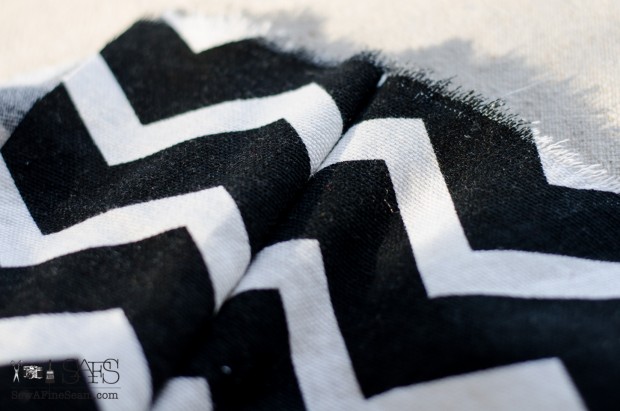 After sewing I folded the two long pieces till they came together like they should if there were a seam sewn. 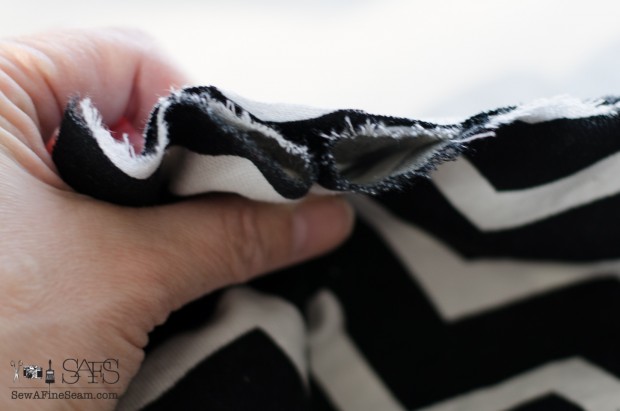 This is how it needed to look when finished. 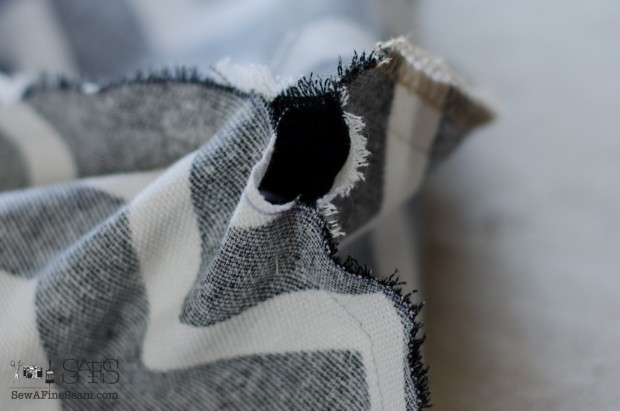 I then sewed a seam joining those two long pieces right where I had them meeting up. 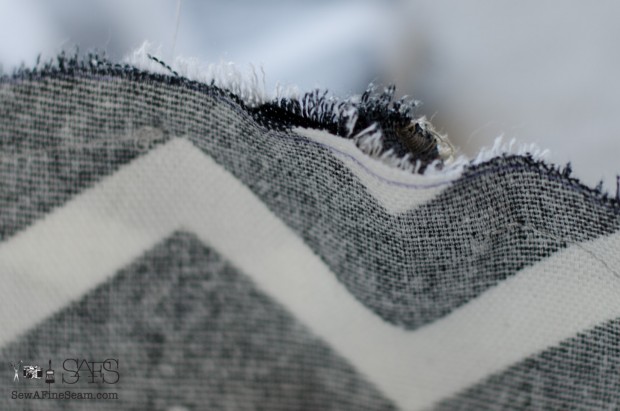 After sewing and finishing off that seam, the remaining edge of the top piece fit perfectly with the now neatly seamed side piece.

I hope that made some sense.  It’s so super easy and if I had to figure it out using some lofty equation instead of my simple hack I’d still not have this project finished 😀 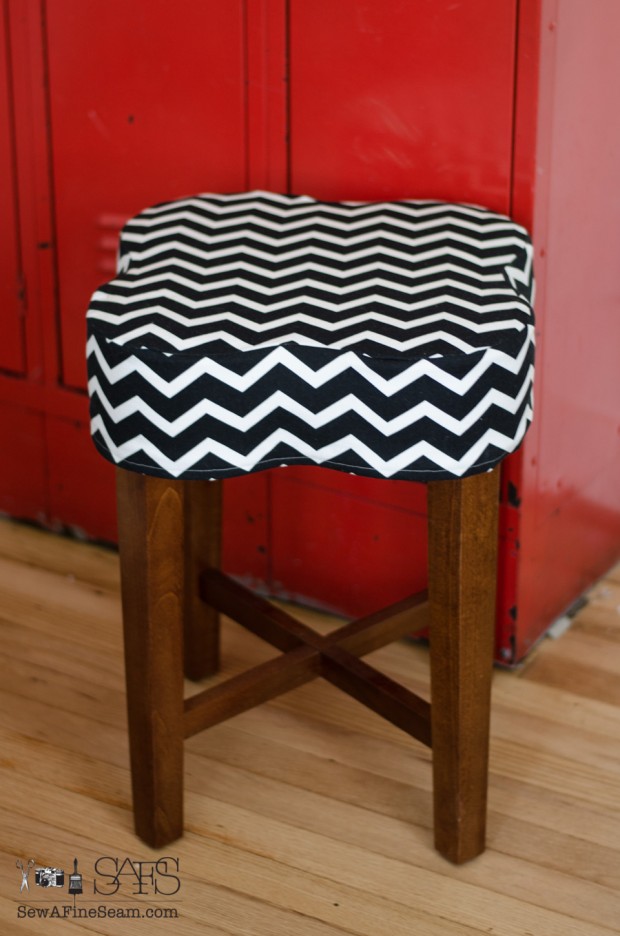 The edges were finished with a simple shirt tail hem. 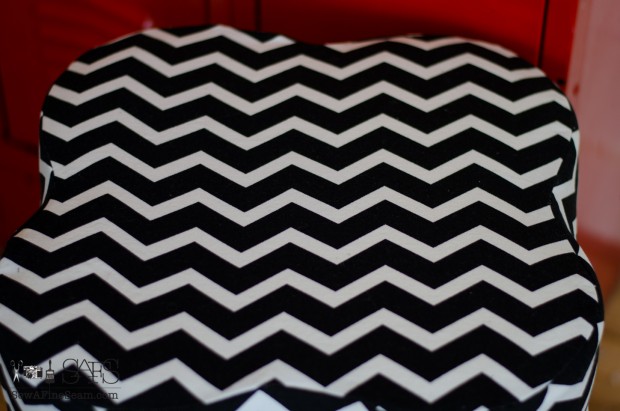 I had planned to use some pins to hold the cover to the underside of the ottoman at the inner curves, but the covers fit snugly and held nicely without doing that.  The original fabric is a velvety velour so that helps the new covers cling to it I think. 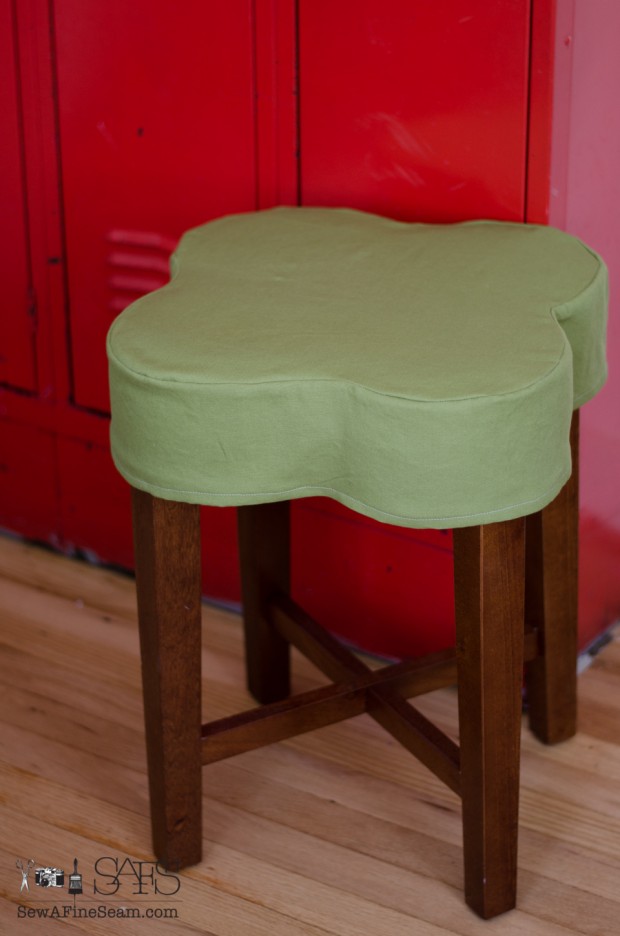 And the green.  Both covers look great for a teenagers room 🙂 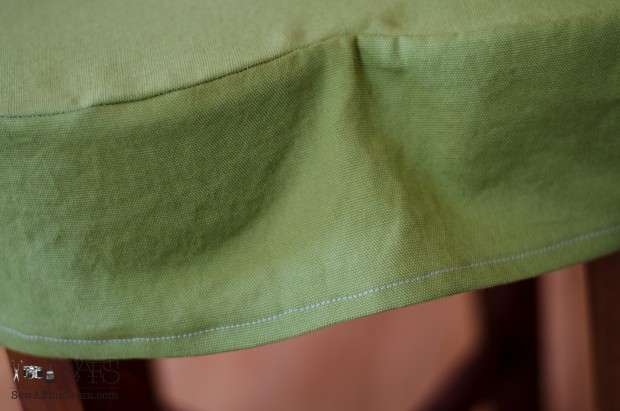 Here I pulled the cover out from the inner curve. 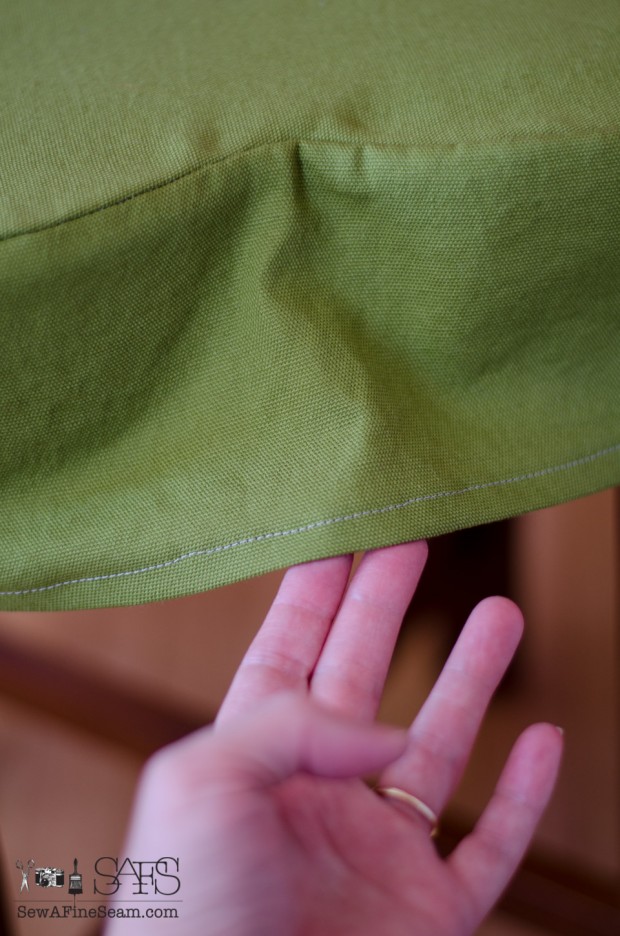 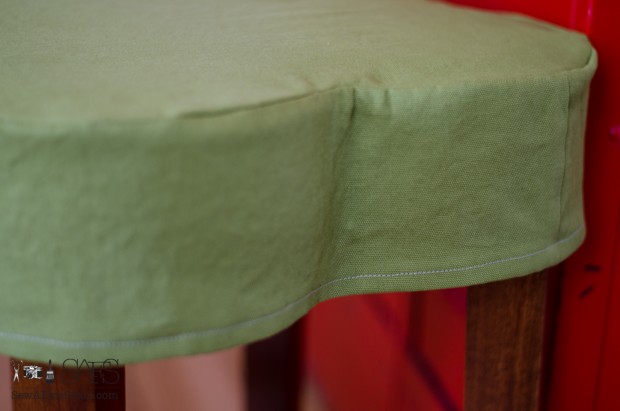 And all you have to do is tuck it back into the curve and it stays.  Pretty cool when a project turns out this good on the first try! 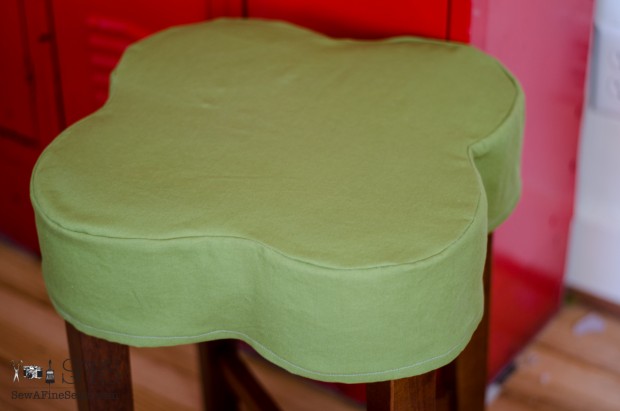 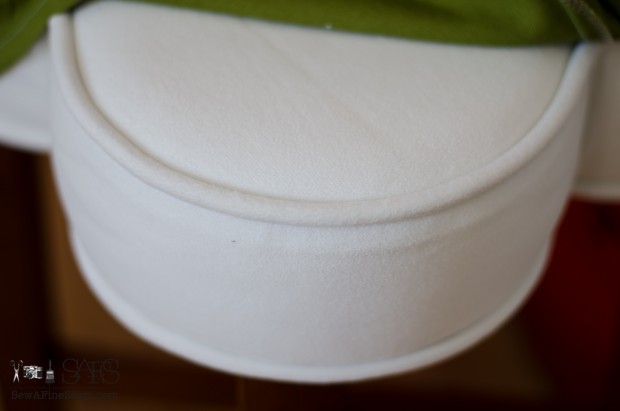 I took this pic to show you how the original ottoman has piping. And how the new covers do not but they cover over it nicely without looking funny – just in case you ever wondered if you could cover something that had piping to start with but not add the piping to the new cover.

It works just fine and dandy 😀 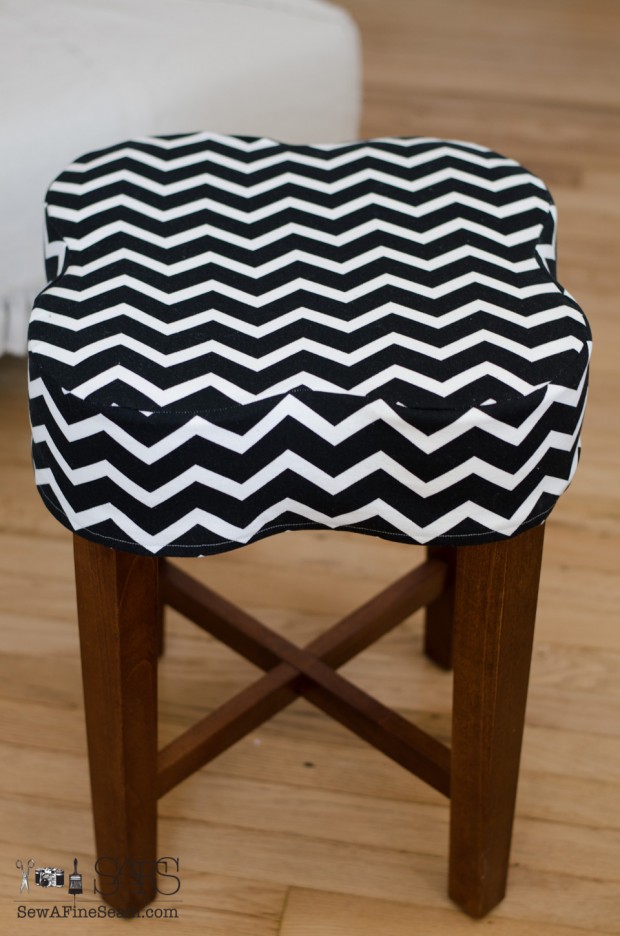 Now if you want a flower shaped ottoman but want it slip covered you can do it yourself!

linking up – The Essence of Home

Sign up for all the Strawberries and Cream from Sew a Fine Seam! (discounts, news, product launches, info and more!)
« Rewiring a Vintage Lamp
TINbox™ »