Today I’m bringing you a really fun project that I’ve been really excited about and could hardly wait to share with you.  I’m teaming up with 5 other bloggers for a monthly project challenge – which means I have a deadline and the project must get done.  This months challenge was to use paint and/or stain in some way.

So here’s my Project Challenge #1 – Paint and Stencils

Paint?  Why yes, please!  I love to play with paint!  And I do a lot with stencils lately too so lets use some of those too. 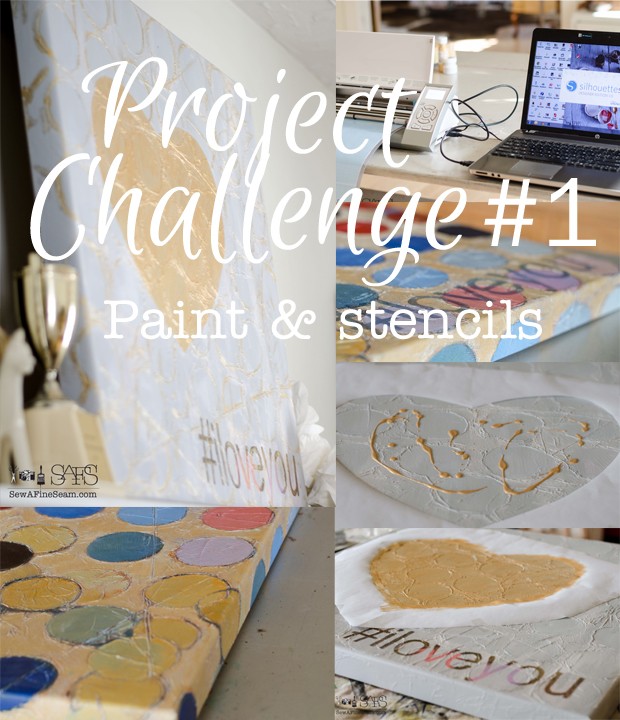 I’ve had a canvas around for months now that I wanted to use for a project.  This was just the one.  I’m thrilled to finally have done something with it – and just in time for some Valentine’s Day Decor. 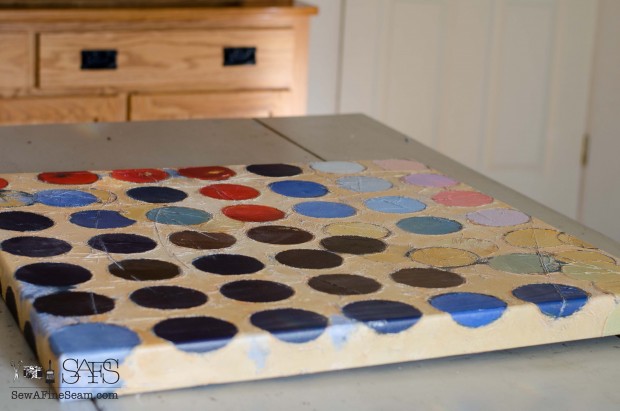 I found this canvas at a local thrift store for $5.  I bought it for a project I was going to do with some friends but ended up not doing it.  So it sat in my pile just waiting to be used for something.  I honestly think it’s kind of cool in its original state but it didn’t go with my decor and I really wanted to use it for a project. 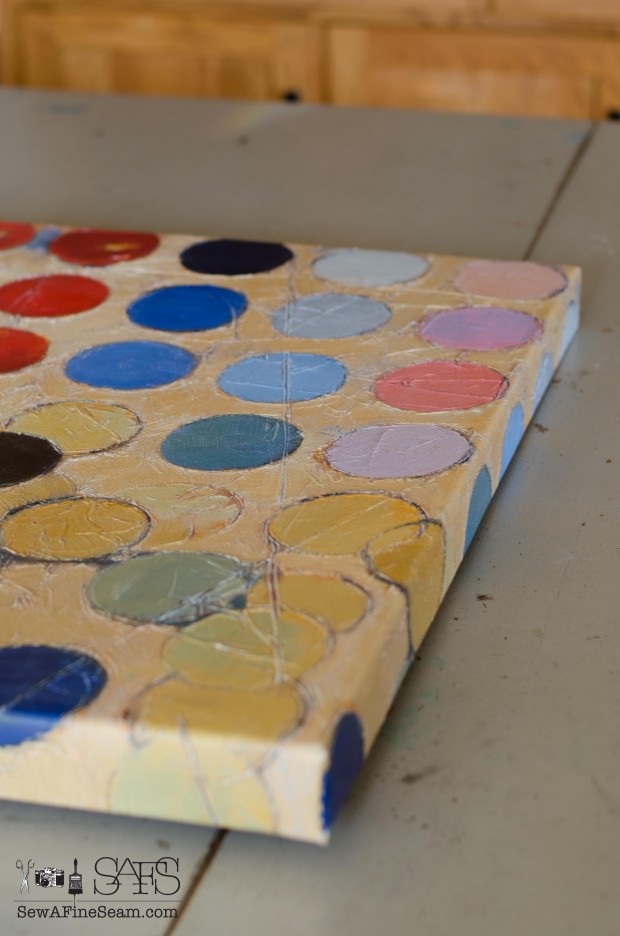 My favorite colors in it were the ones shown here so I used that edge to start the project.

I used white paint and a gold metallic paint for the details. 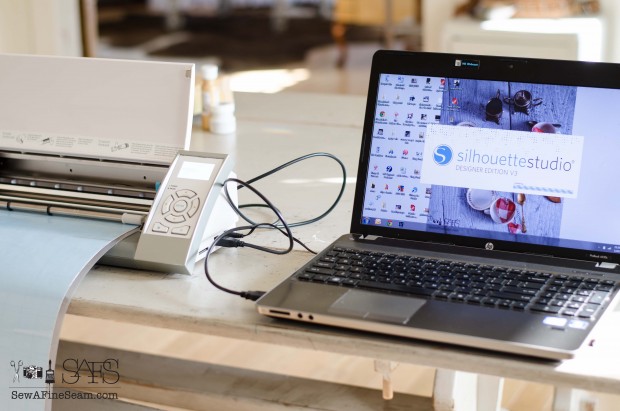 And I used my silhouette to cut a stencil. 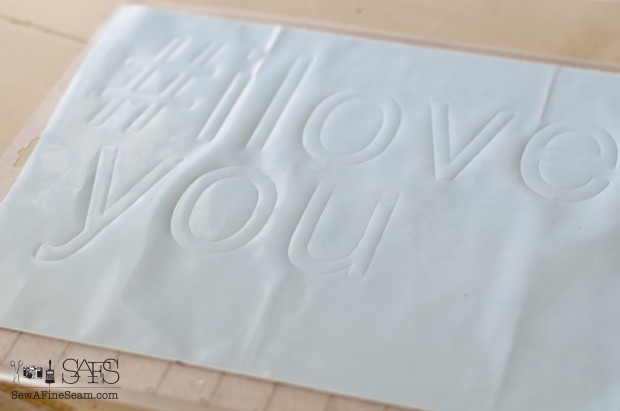 Since this project was going to be in time for Valentine’s Day and I’m a bit obsessed with using hashtags right now I chose #iloveyou for this project. 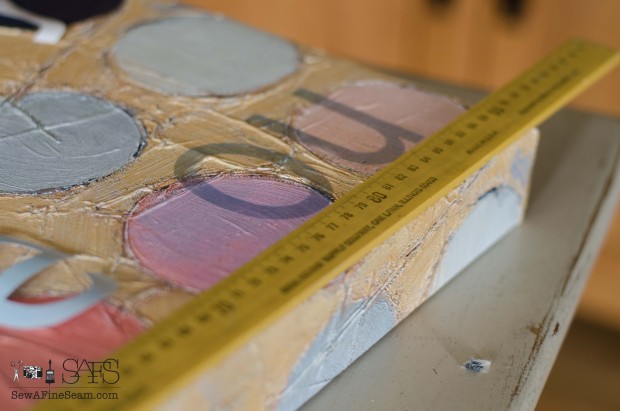 Instead of using it as a stencil like you normally use a stencil, I pulled the sticky part of the letters off, and placed them along the lower edge of my canvas.  I used a yard stick to keep the letters straight and just eyeballed the distance between the letters. 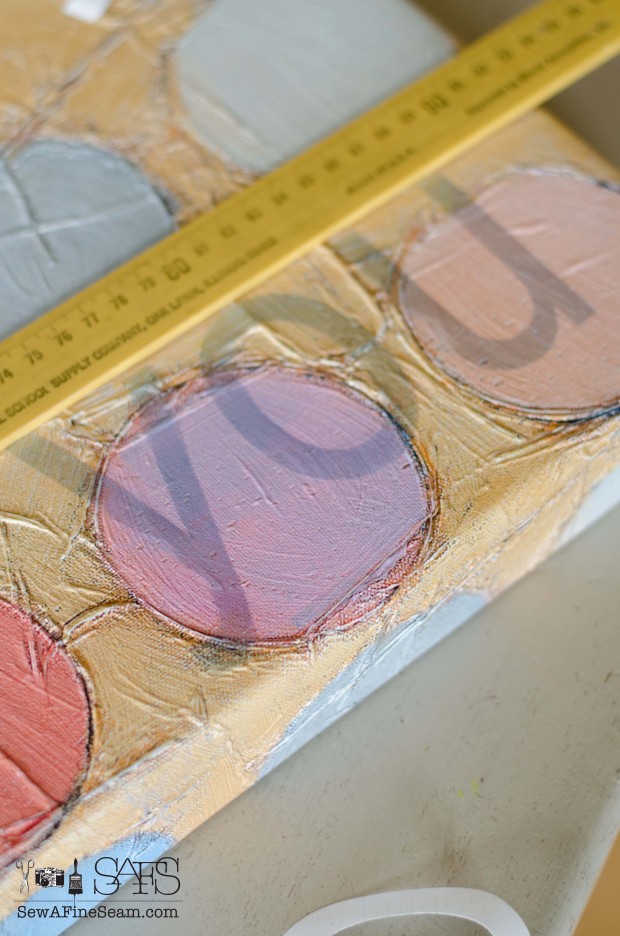 Since the ‘y’ goes below the line I switched the yard stick above the letters to keep the ‘y’ straight in line with the others. 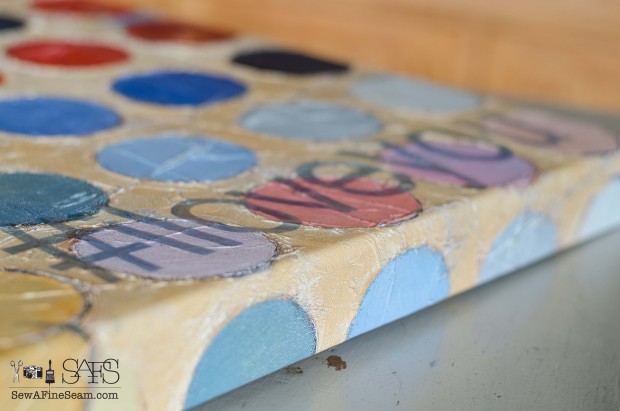 Once all the letters were positioned I pressed them down as firmly as I could.  This canvas had a lot of texture going on so the letters didn’t stick very tight. 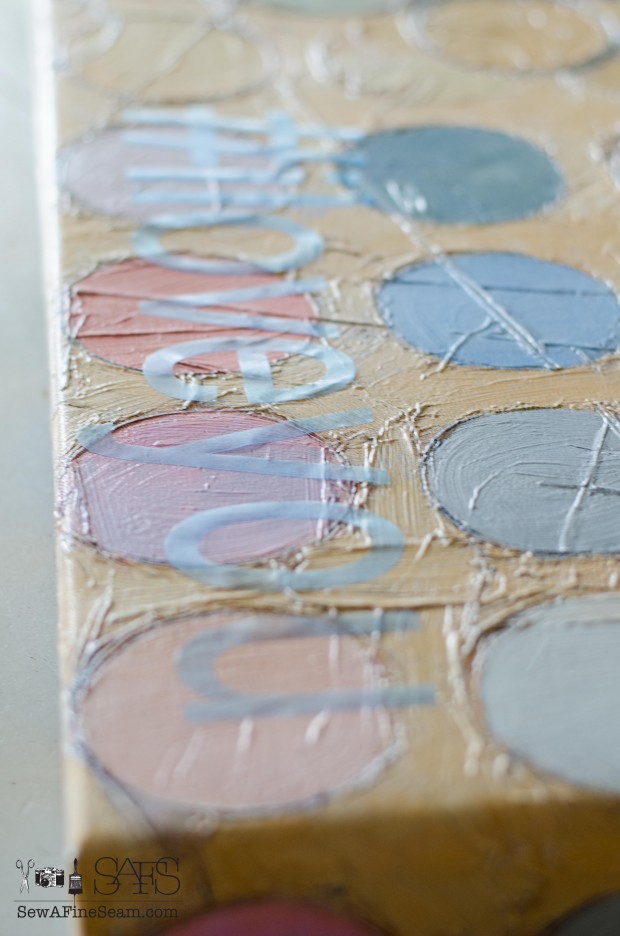 You can see in this photo how the letters don’t adhere very tightly to the canvas.  Since I wasn’t going for absolute perfection on this I didn’t worry about it at all. 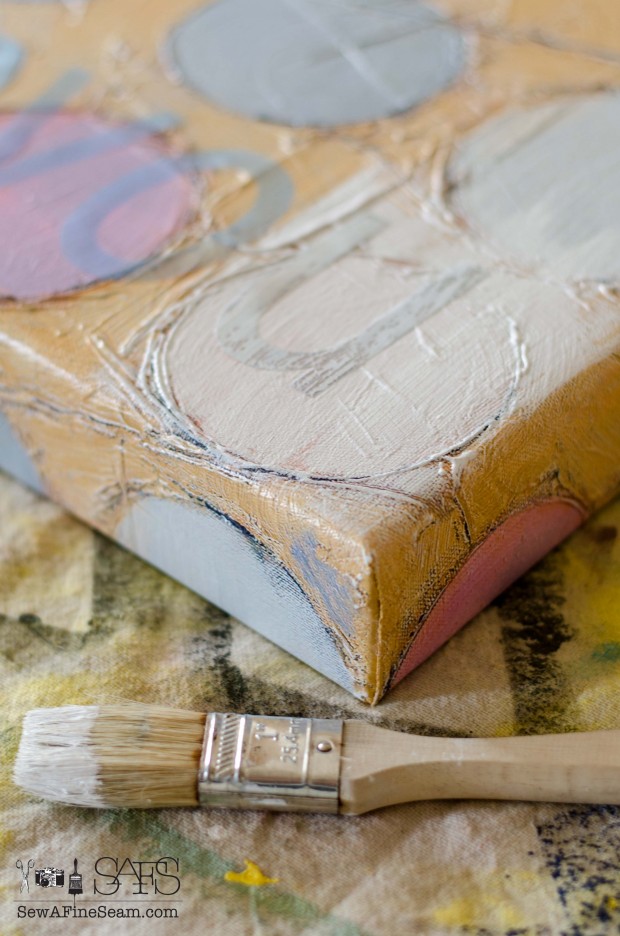 Next I painted the white paint over the letters.  I painted carefully so I wouldn’t pull the letters off – it wasn’t difficult at all. 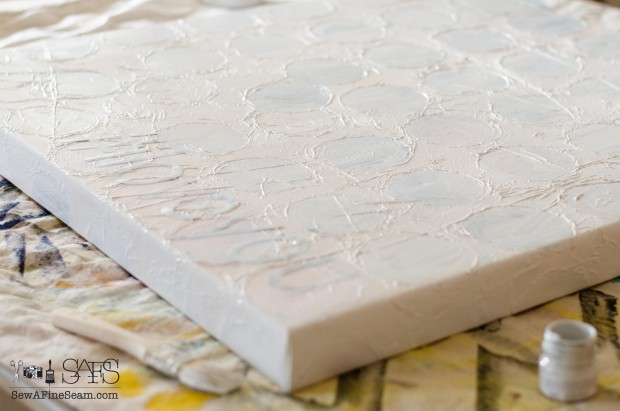 I coated the whole canvas with paint, including the edges.  I let the first coat dry and painted a second coat.  After that was dry I used grey and dry brushed over some areas to give it some depth and a bit more texture. 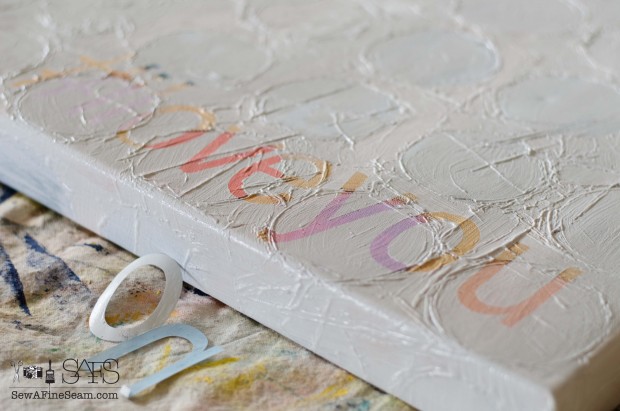 Then I removed the letters.  And the lovely colors of the original came through. 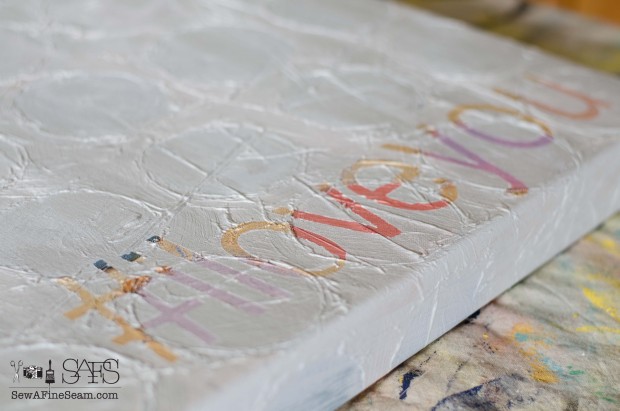 As you can see some of the colors were pretty light and didn’t show up as well as I had thought they might.  This is when you start thinking maybe your project was a fail.  But then you decide you don’t want to think of a new project and you really want to make this work.

So I added some bronze metallic paint. 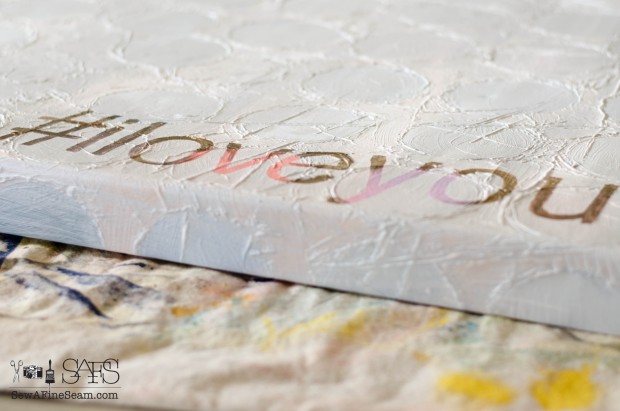 And I added some to the #iloveyou in the lighter places.  Ahhhh, now that’s getting better.

As soon as I started painting the canvas white (I picked white because I love white and just can’t seem to get away from doing most projects white) I knew it was going to be too plain.  That was one reason I added the grey paint.  But it was still a bit too plain.  Too much empty space. 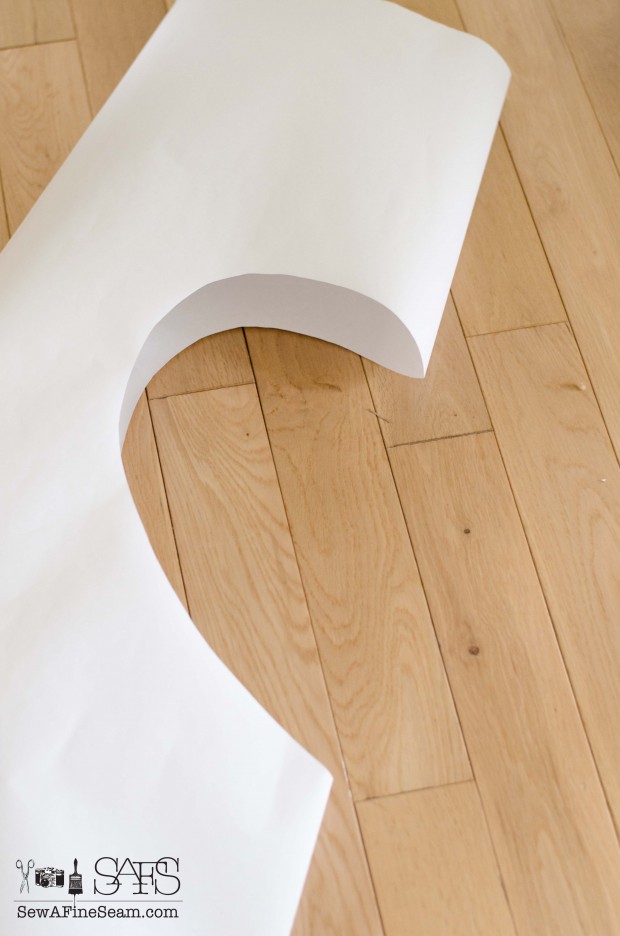 What would go better with #iloveyou than a heart?  So I pulled out a large roll of white paper I’ve had around forever and made a heart stencil. 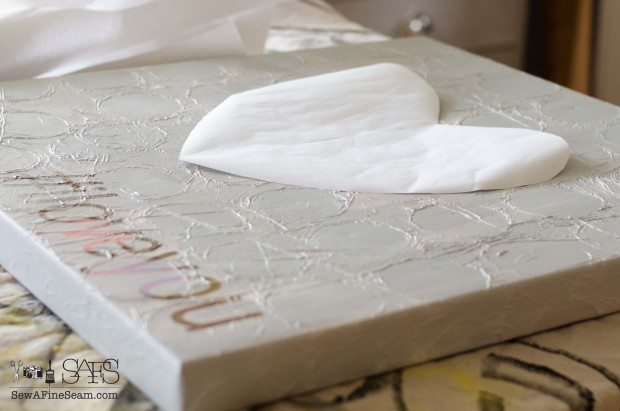 I tried the heart on the canvas to make sure it was the right side and tweaked the cut-out a bit to use as my stencil. 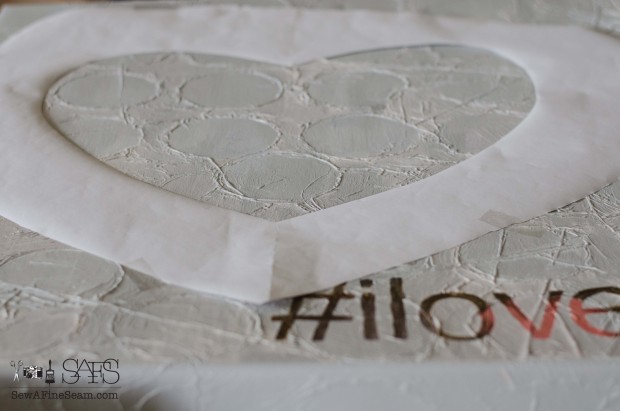 And then used regular old scotch tape to attach the stencil to the canvas. 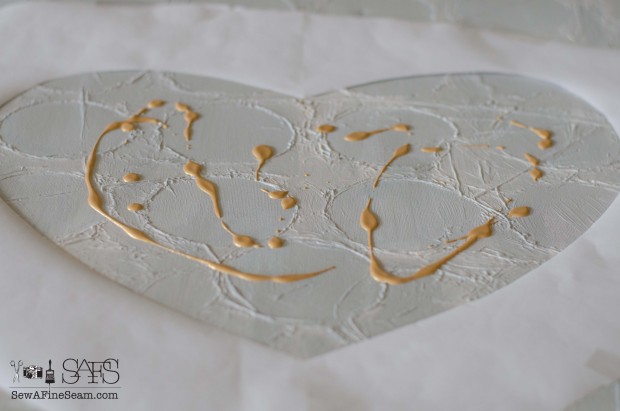 The heart is gold metallic paint.  I simply drizzled some onto the heart shape … 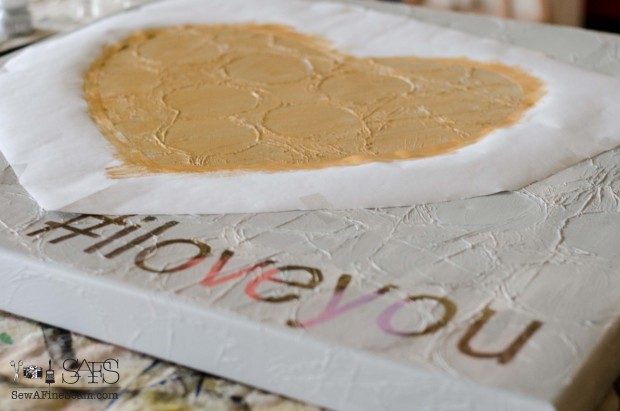 …and spread it around with a brush. 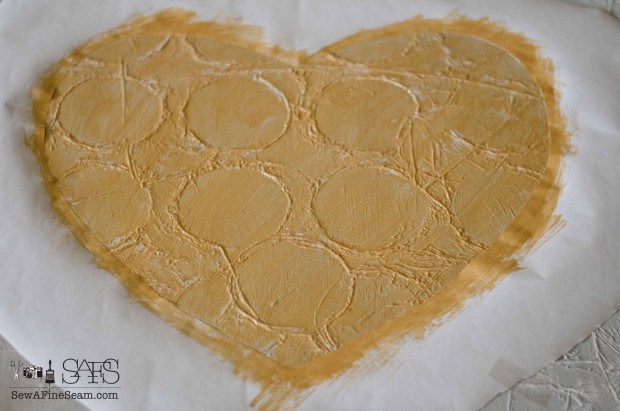 I didn’t cover it super heavy as I wanted it to have a bit of an imperfect look to go with the texture of the original canvas. 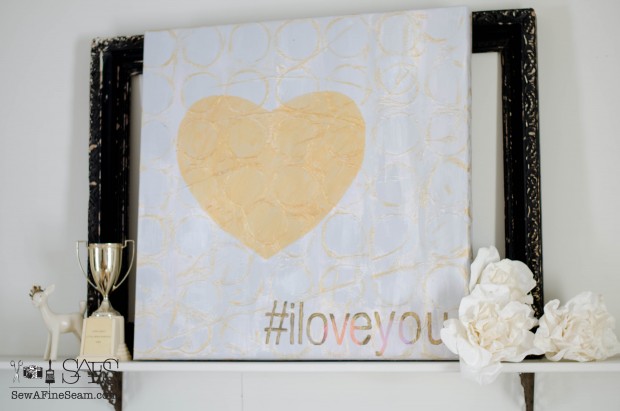 After painting the heart I decided it still needed a bit more so I used an artist brush and more gold tint and hit the texture of the circles and lines of the original canvas.  I also added some gold to the #iloveyou too.  And I fell in love with it!  I had planned to take it to the shop and put it up as a display for Valentine’s Day.  And put a price tag on it.  Maybe I still will.  But after styling this for the beauty shots I left it. 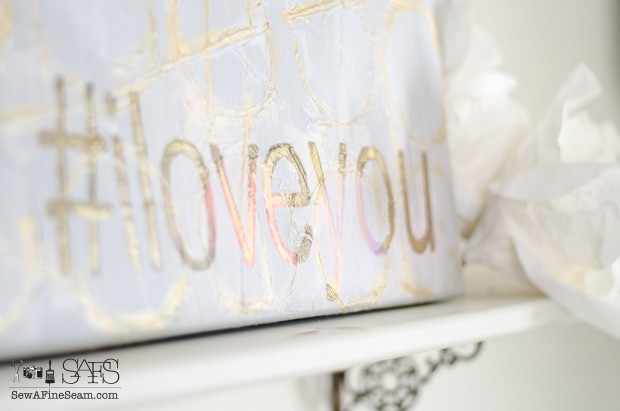 And I fell in love with it!  I had planned to take it to the shop and put it up as a display for Valentine’s Day.  And put a price tag on it.  Maybe I still will.  But after styling this for the beauty shots I left it. 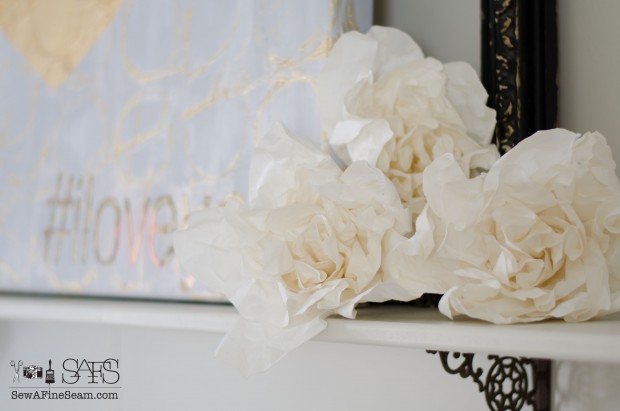 It’s not my typical decor – maybe that’s one reason I like it so much.  Also I know it won’t stay long because I’m like that – I’m always changing my decor around!  But I ended up styling the whole shelf and I love it.  I’ll share the whole shelf with you in another post about Valentines Day decor.  Cause this post is about my project 🙂 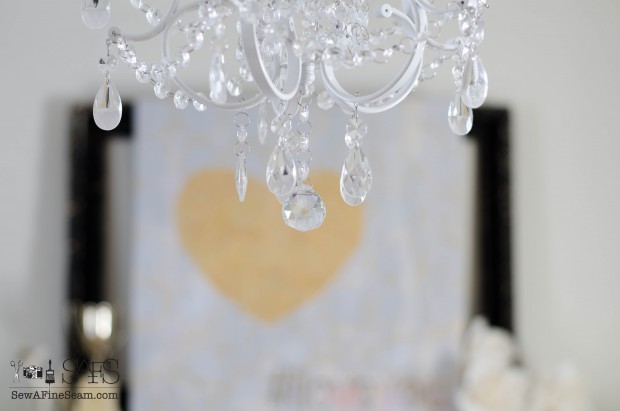 I also love the fact that now I have a cool light that I love and want in my photos of my living room. 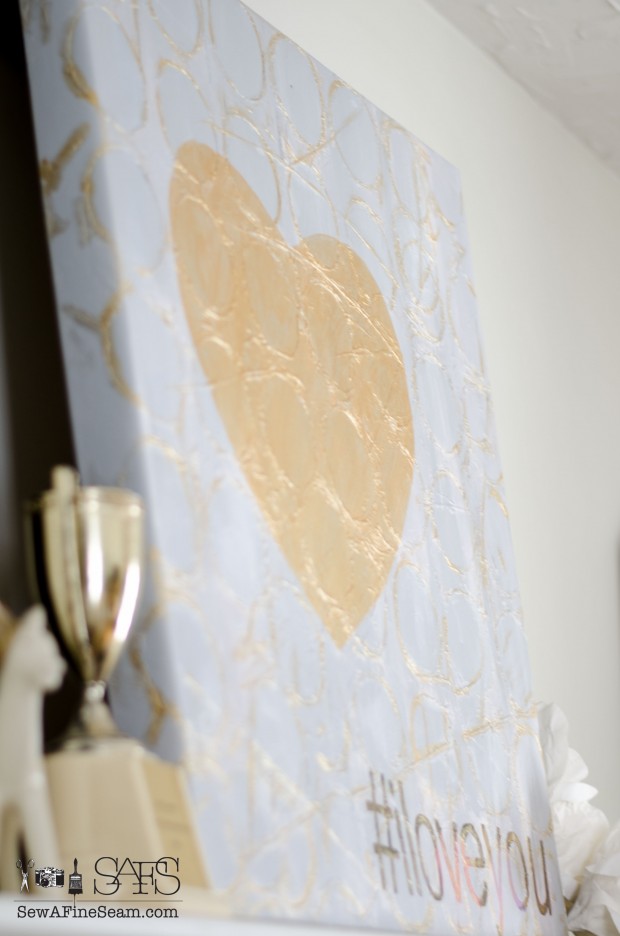 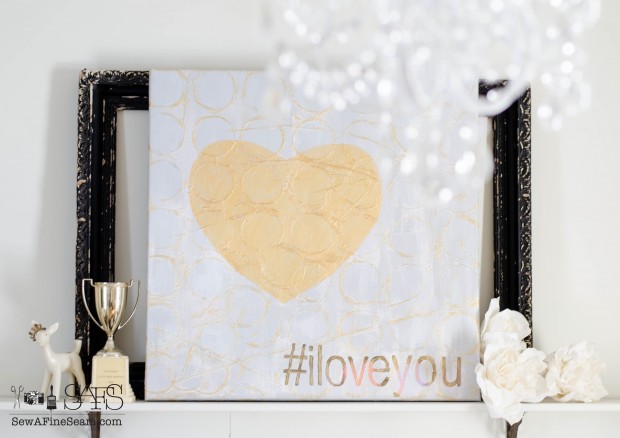 As I mentioned, this is a monthly project challenge!  I’m so excited to be teaming up with other bloggers, each doing the challenge with the same item(s) each month.  It’s so fun to see how the creativity and individuality of each person comes through in projects like this!  And being part of this means I have to do the projects – I can’t just think of cool, fun things to do and share on my blog and then get lazy and not get them done.  win-win 😀

Make sure you go check out all the other projects too. The links below will take you straight to the other awesome projects.

And next month we are going to offer a link party to go along with our project reveals!  That way all of you can join us and link up your project too!  February’s category is a $5 or less thrifted item 🙂 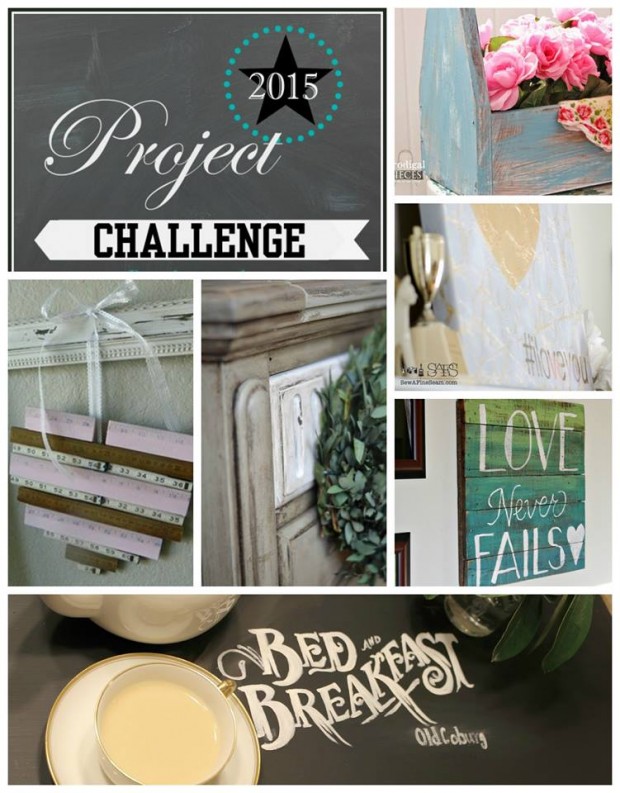 Sign up for all the Strawberries and Cream from Sew a Fine Seam! (discounts, news, shop openings, info and more!)
« NCR – An Old Relic of a Machine
Son of the Blessing »