I recently had the privilege of making some burlap curtains for a friend. Allisa from Thobe Rentals asked me to make her some window treatments – 2 of the places a couple simple, hemmed panels would suffice. But for the door we decided something a bit more sophisticated was called for.  I suggested a Burlap Roman Shade.  After discussing it and checking with her husband about his opinion of making a Roman shade work there we decided to go for it. 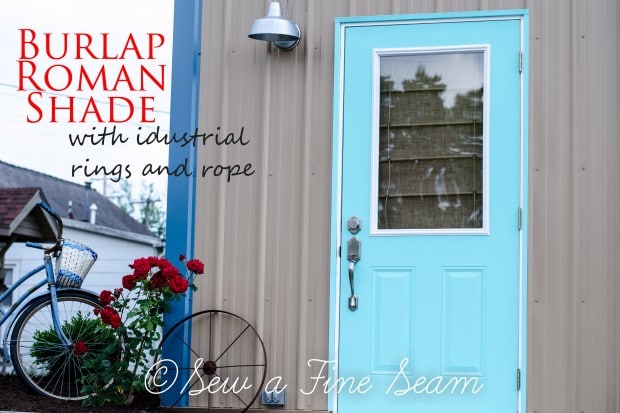 Making the Burlap Roman shade was easy enough.  I just used my own Roman Shade Tutorial.  I’m happy to say that I still make Roman Shades the same – I think that means my tutorial was a good one 😀

1. The roping wouldn’t run through the burlap as easily as cotton fabric.

2. I didn’t like the idea of white polyester roping because this Roman Shade was going to be on the door everyone enters to Allisa’s rental business.  I wanted it to look good from the backside too.

3. Using the hemp rope I was planning to use made it impossible to run the roping through the fabric like I had on other Roman Shades. 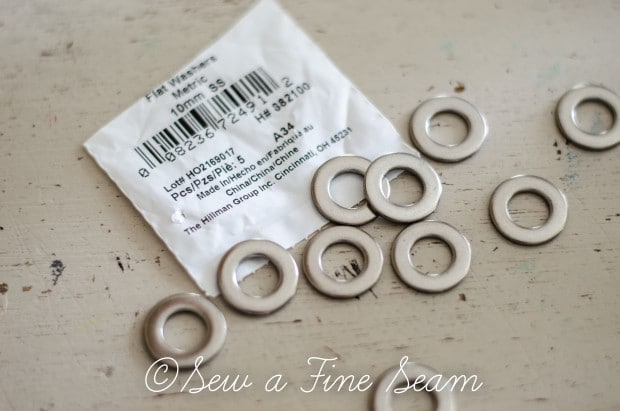 Using the white plastic rings sold at the fabric store specifically for Roman Shades wasn’t really the look I was going for either.  So I headed to my local Home Improvement store.  Heading into the hardware section a couple guys who worked there asked me if I needed help.  I told them sort of what I was looking for – they really didn’t get it at all!  I just know they love to see a woman walk in who is trying to create something industrial and ‘cute’ but really isn’t quite sure what to call what she needs to accomplish here goal. 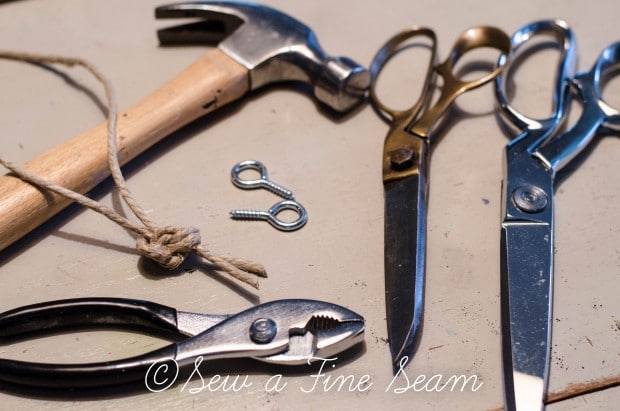 Some of my tools.  The eye screws are for the roping to run through on the piece of wood at the top.  The hemp rope is what I used for the Roman Shade’s pull ropes.  You can see all the how-to and step-by-step instructions in my Roman Shade Tutorial post. 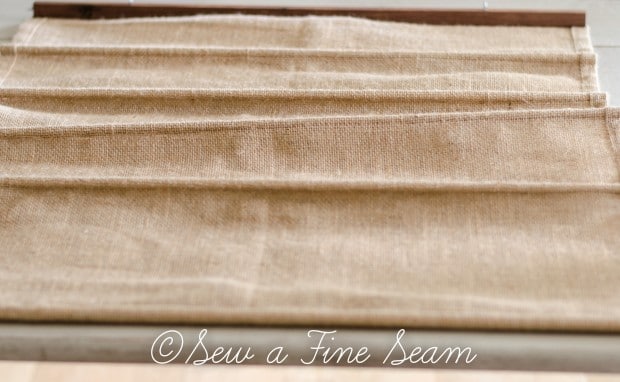 I quite like the look of burlap made into a Roman shade.

I don’t love working with burlap so I won’t be doing many of these but once they are finished they sure are cute!  Burlap causes a bit of an allergic reaction in my skin and irritates my lungs.  I’ll leave working with it to others most of the time! 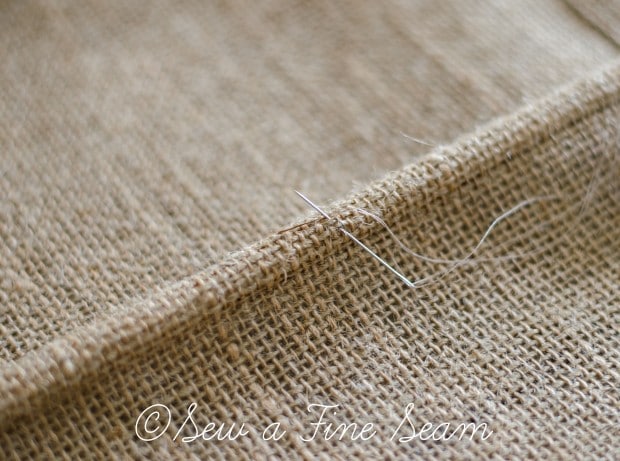 I figured how far in from the edge I wanted the roping to run and stitched a washer to each dowel pocket.  The dowel rods were already in place. 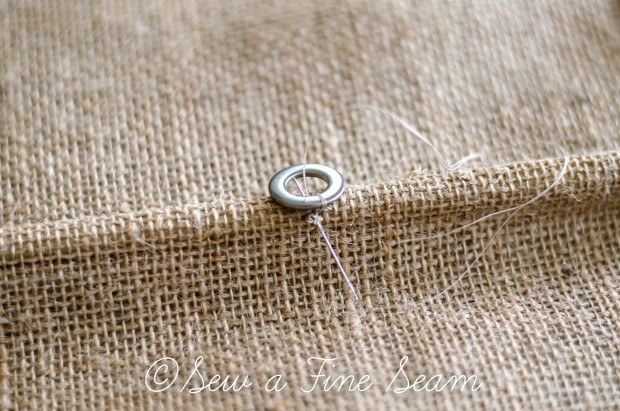 I only stitched one side of he washer on.  The washer needs to be able to move freely in the stitching. 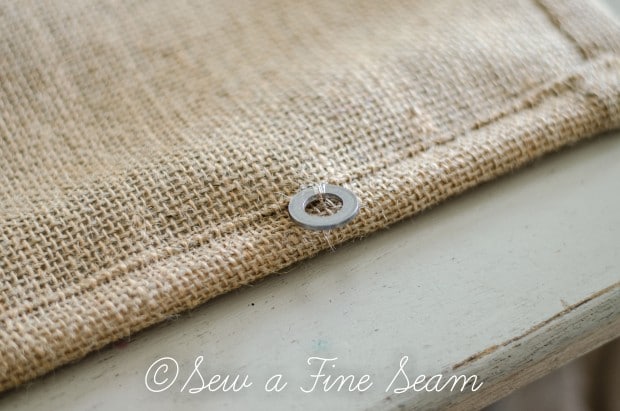 Here you can see this washer is turned over – it swings back the other way too – I did not make the stitching super tight it wouldn’t break as the washer moved around. 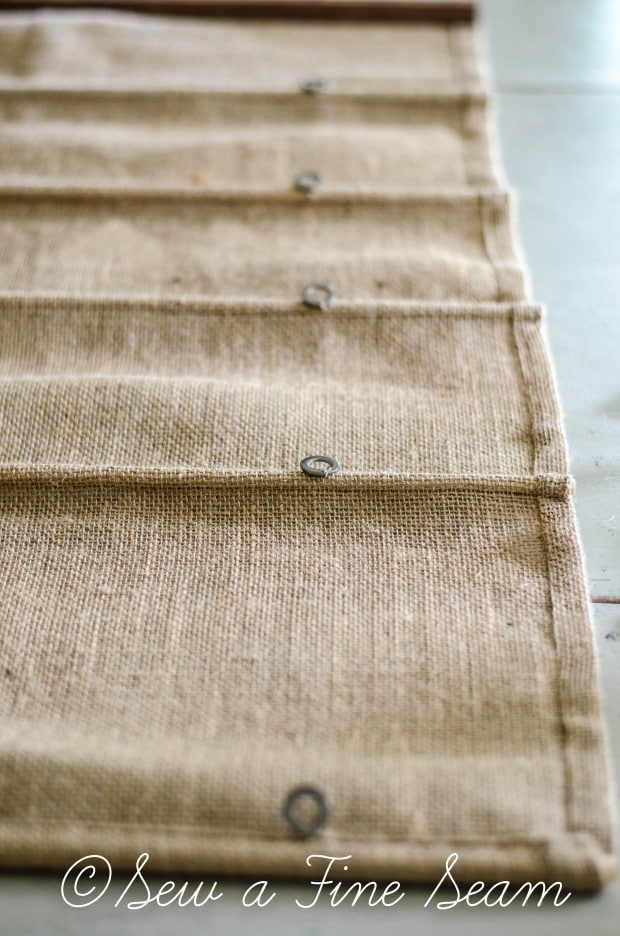 Washers all in a row.  There is another row identical to this one on the other side. 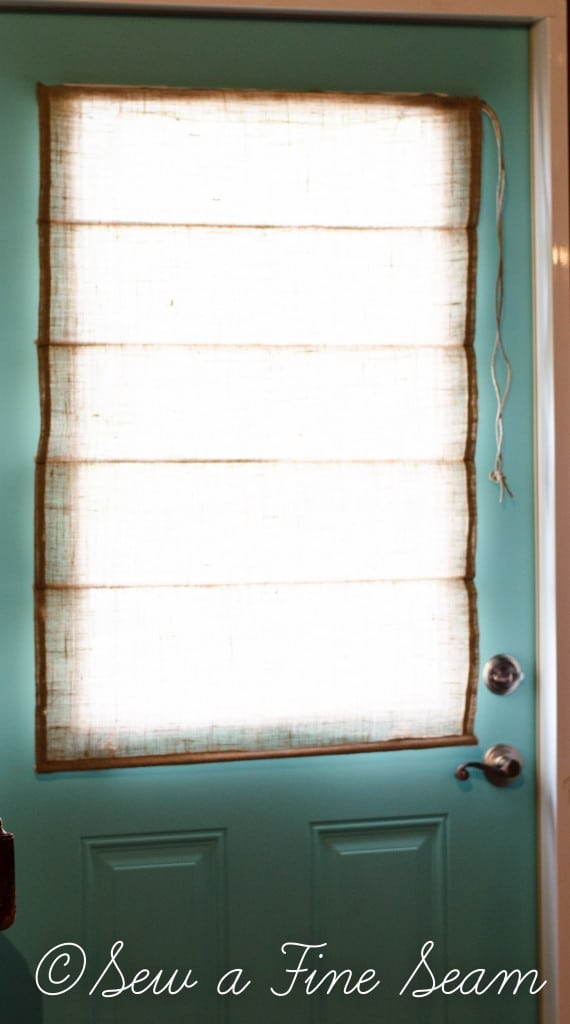 And here it is installed on the door it was made for! 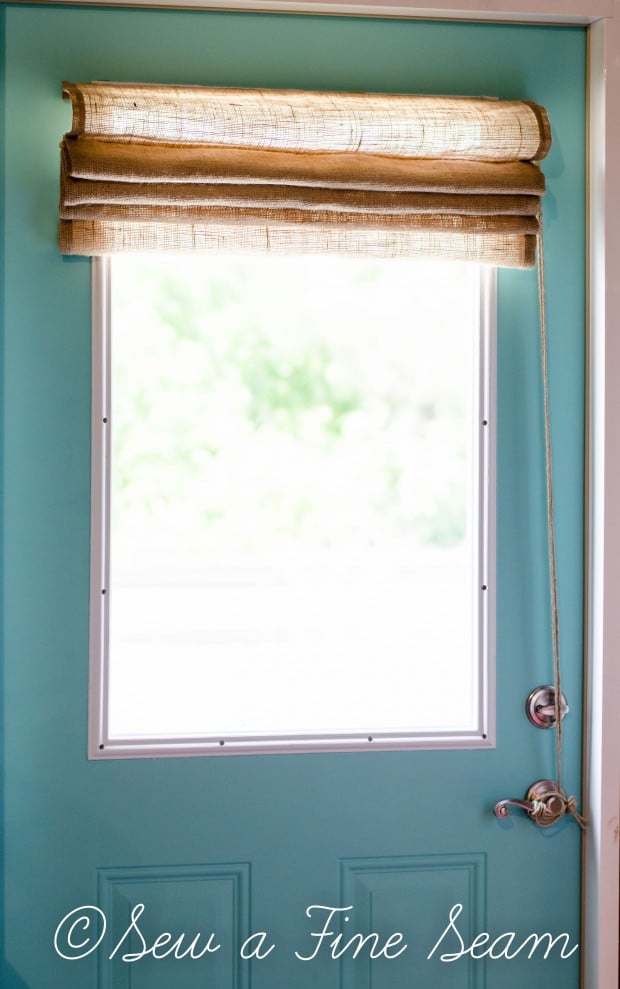 Doesn’t that roping look cool with the burlap?? 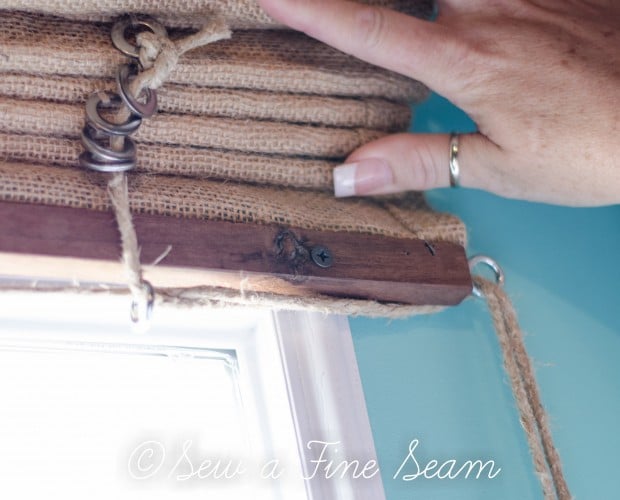 And the most impressive part – Allisa’s husband, Rob, installed the shade by using the screws that held the molding on around the door of the window.  I think it’s so cool that we could add a Roman Shade to a steel door without adding screws or making new holes in the door. 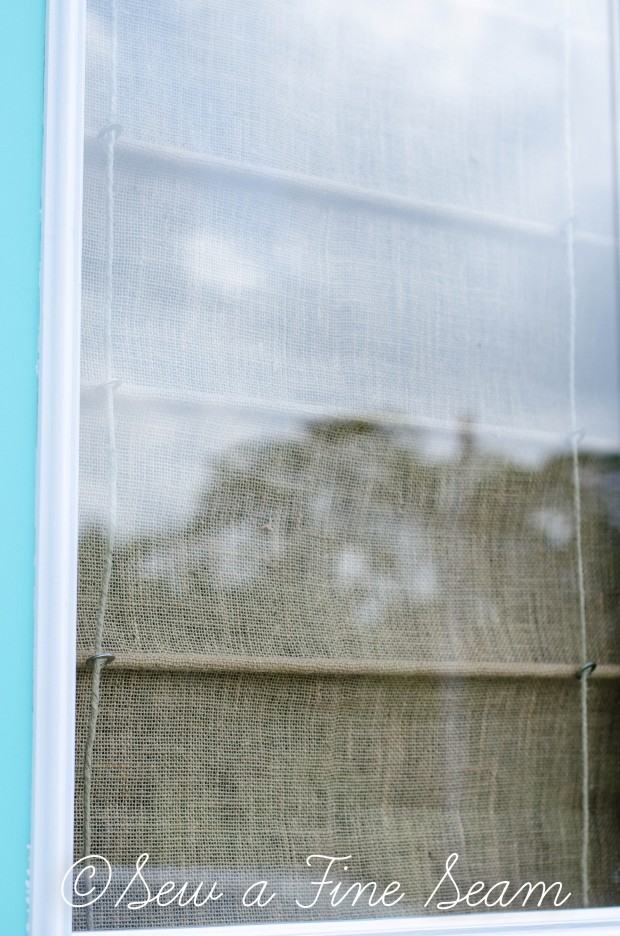 And from the outside.  Doesn’t that look amazing?!  If I do say so myself.  I love the washers and the hemp rope with the burlap.  So much better than white plastic rings and white polyester rope. 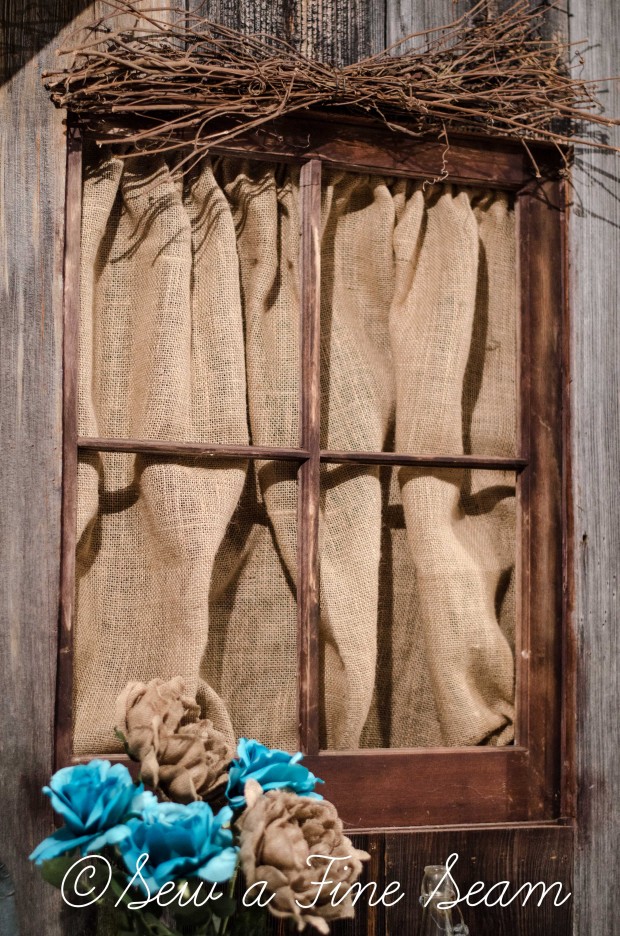 One of the curtain panels I made went on a tension rod behind this old window inside the shop. 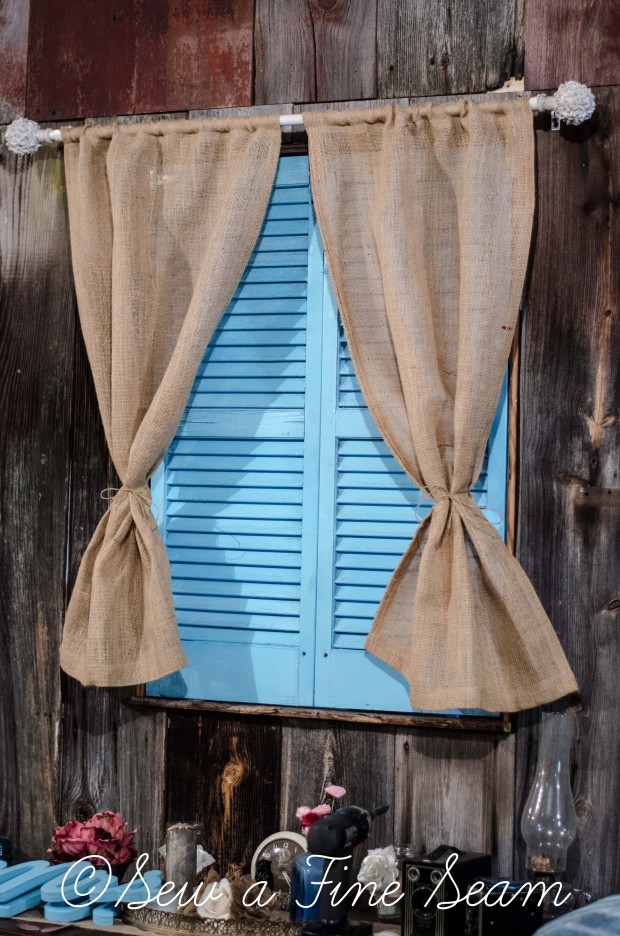 These panels were added for some texture and fun with the shutters. 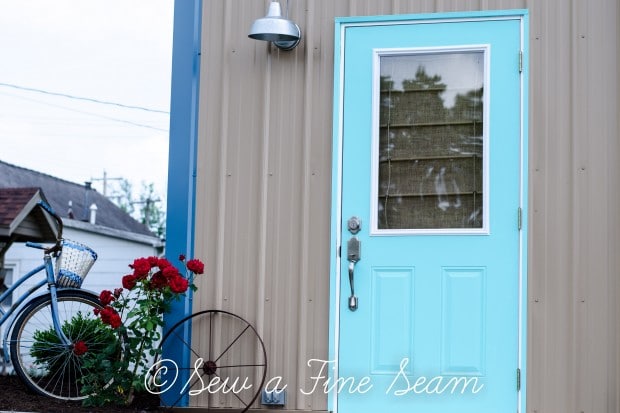 The curtains were easy and made a great impact in the shop.  The Burlap Roman Shade was easy too, and such fun to create something a bit unique and something so perfect for this space.

If you are in my area and need a rental for weddings, events, photo shoots, or whatever – Check out Thobe Rentals – she has some great stuff!

Sign up for all the Strawberries and Cream from Sew a Fine Seam! (discounts, news, product launches, info and more!)
Be the first to know about new tapestry wall hangings, boho throw pillows, seasonal home decor and more.
« Slipcovered Wingbacks
Kansas on My Mind »