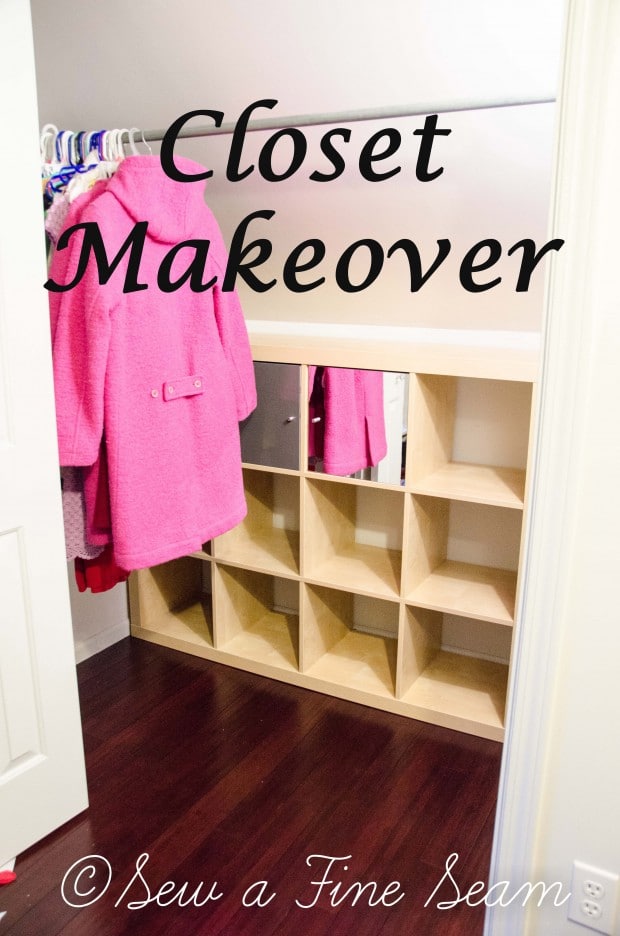 My girls have long been in need of a major closet makeover.  Whenever they ‘cleaned’ their room most of their stuff could be found by opening the closet doors.  Everything that wasn’t stuffed under the bed that is.

I had an idea what I wanted.  Shelves of some sort along the back wall and a closet rod running along the short end instead of along the front like a normal closet. 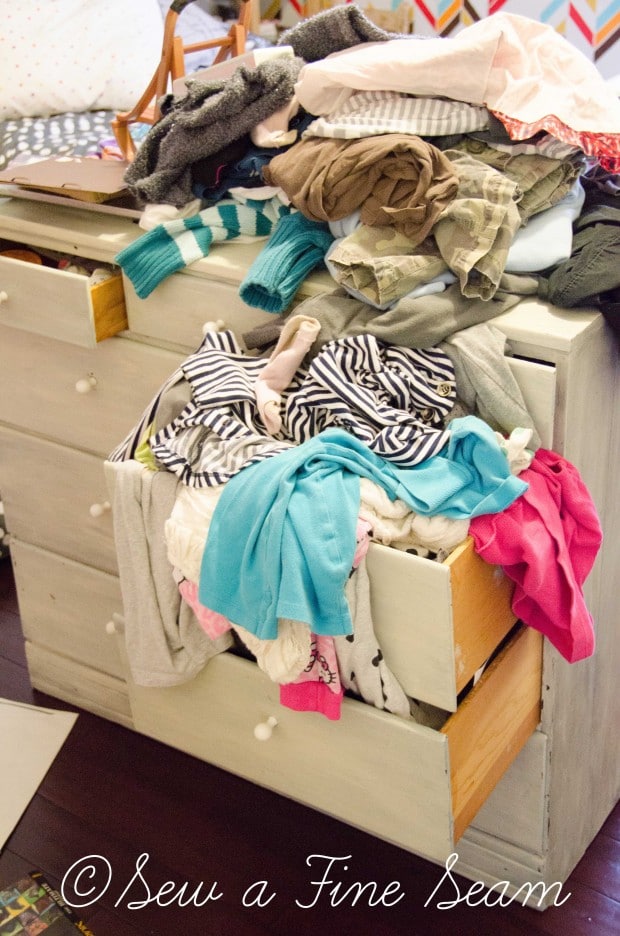 I was tired of their dresser (which was in the back of the closet) looking like this.  It was way too small for 2 girls, especially when you have winter and summer things in the same space. 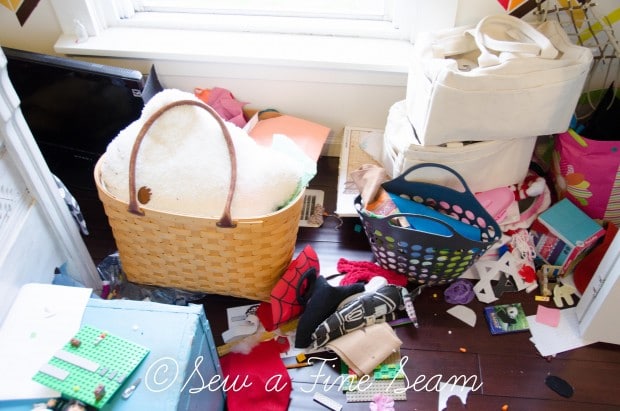 And the rest of the room and closet looking like this. 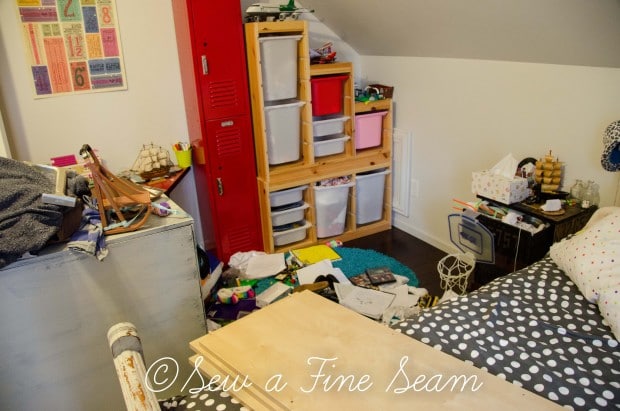 I knew it would never be perfect but when there isn’t room to store all the clothes two girls possess something must be done. (This photo is during the makeover process so everything from the closet is out in the room and some of the shelving can be seen on the bed) 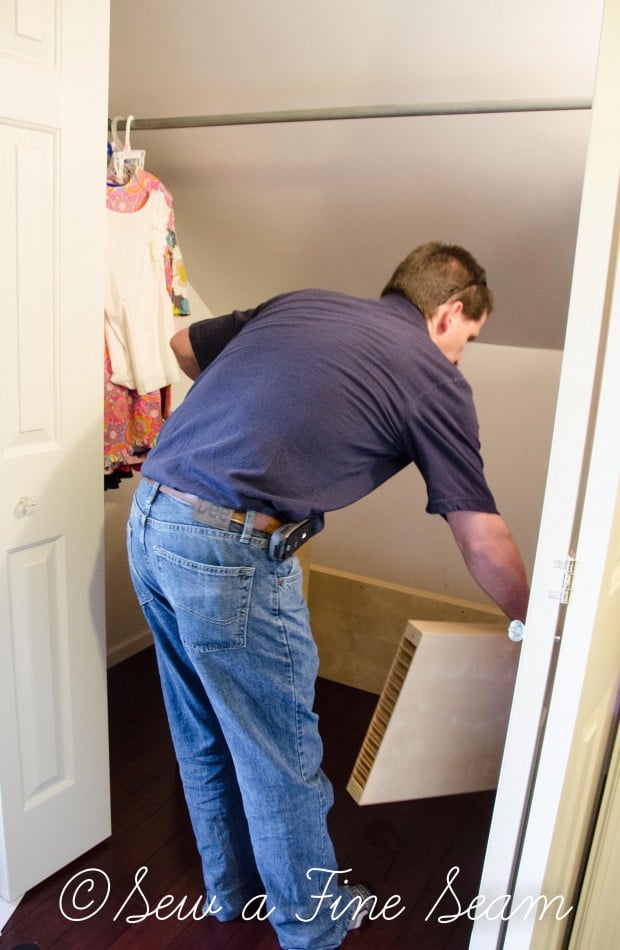 You can see the bottom of the side piece in this photo – because the ends of the pieces were thick wood Travis was able to just cut the side pieces down one shelf to create a unit that would fit with our short wall space in our upstairs.

Travis was going to build shelves.  You know, in his spare time.  But I always come up with other projects and odd jobs to fill his spare time if he ever has any.  So I was considering just buying some sort of shelving at a home improvement store. 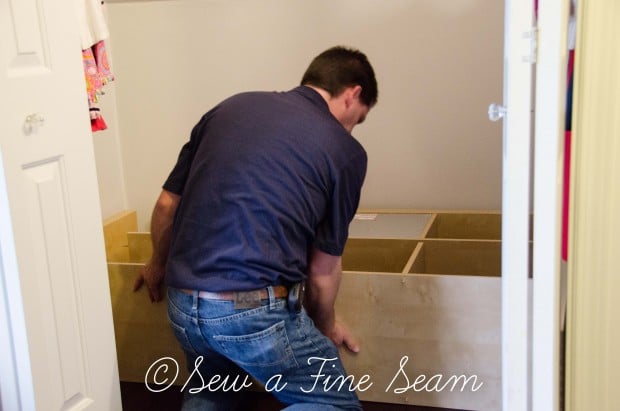 But then Travis and I went to Cincinnati for a weekend to attend the Homeschool Convention.  Because, you know, I do try to homeschool my kids in my spare time 😉 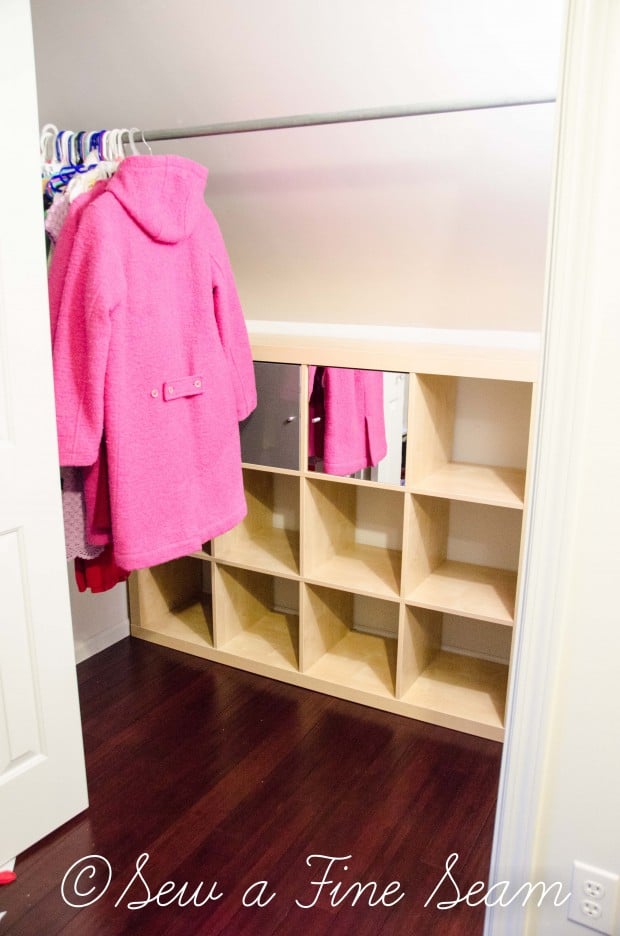 On the way home we stopped at IKEA.  The route to Cincinnati takes us right by IKEA.  NOT stopping is just not an option.  My hubby loves IKEA about as much as I do so it’s really not even discussed – it’s just a fact that we WILL stop at IKEA. 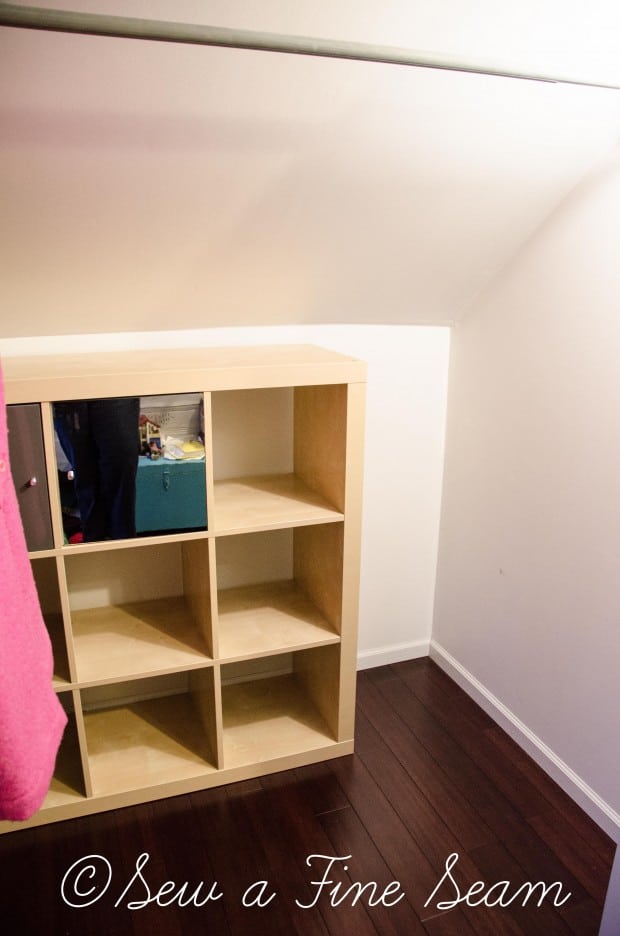 In the AS-IS section, where everything is marked way down, there were several sets of wood wall cubbies.  There was an all-white set that was only $105.  I really wanted it and thought it would be cool in the girls closet.  It would need to be shortened a bit to fit but all it needed was cut down, put together and shoved in the closet.  No cutting, building, figuring, measuring, re-measuring, sanding, painting, and whatever else goes into building your own set.  Travis thought it a good idea too but by this point he was done.  I was buying the place out of their pillow forms and had added a few other things to the carts (yes, we had to have 2 carts to hold all my pillow forms and they were piled high)  All he could see at this point was dollar signs – and a car full of feathers 😀 And he wasn’t in the mood to figure out if we could get it all in the car.

Now I must insert here that I knew we could get that set of shelf cubbies in the car.  All of IKEAs stuff is built to be compact to haul.  They just needed taken apart and they would go in first and then all the other stuff we had could go on top.  It was very do-able.  I’ve packed that car full so many times I DO know what I’m doing.  But I held my tongue – well I DID tell him that stuff in the AS-IS section moves quickly – but I could tell it wasn’t worth pushing it so we, and our mountain of pillows, checked out and headed home. 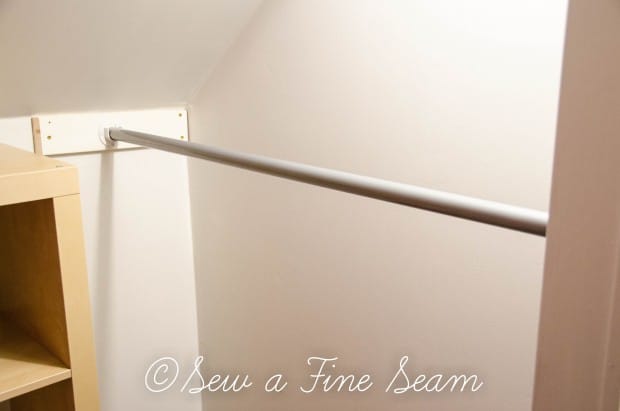 Next Morning:  First words out of Travis’ mouth were something about those shelf cubbies.  He couldn’t get it out of his head how much time and money that would have saved him to just buy them.  And after a good nights sleep he was more in the mood to think about it too.  In the end he headed back to IKEA to get them.

He called when he got there.  Want to know what he said?!  ‘You weren’t kidding when you said this stuff moved fast’!!!  Snicker snicker.  Don’t you love it when they admit you were right?!  So the white one was gone but there was a natural wood and a black one.  I told him to get the natural one and to get it on a cart fast! 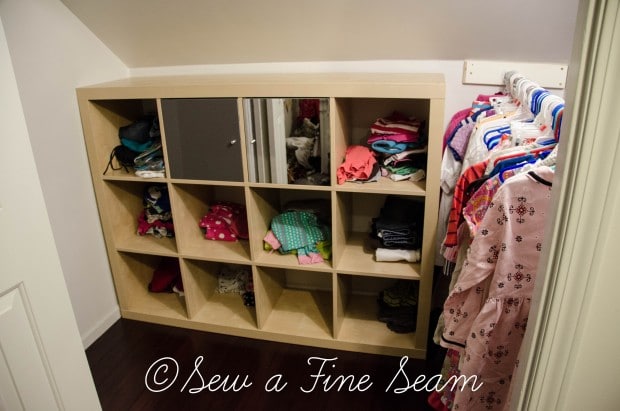 He got it, brought it home, hauled it in, cut it down, put it together and had it all installed that night.  He hung the new closet rod and viola!  Closet makeover complete.  And it has helped a lot.  We went through all their clothes and made some discard piles.  One to put in the garage sale this fall, one for goodwill, and a few things to give to our friends down the street. 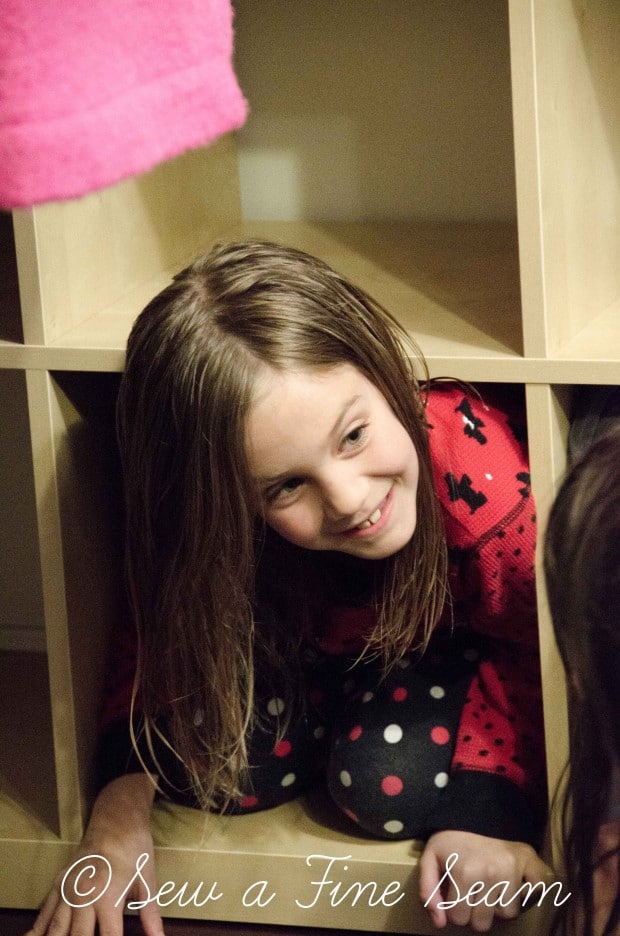 The girls are thrilled with it and they love the doors on this one.  The white one didn’t have the doors.  This one cost a bit more – around $130 I think, but totally worth it.  And it only took one day to get it all in place.  Win-win!  Now if I can just get their fabric-covered bulletin board hung and a piece of artwork made we will have all the projects we planned for this room complete!

Sign up for all the Strawberries and Cream from Sew a Fine Seam! (discounts, news, product launches, info and more!)
« My Garage Sale Finds
Milk Painted Table – Shutter Grey »