I showed you my girl’s room last week, today it’s about keeping it real and some close up details about that stenciled Roman shade. 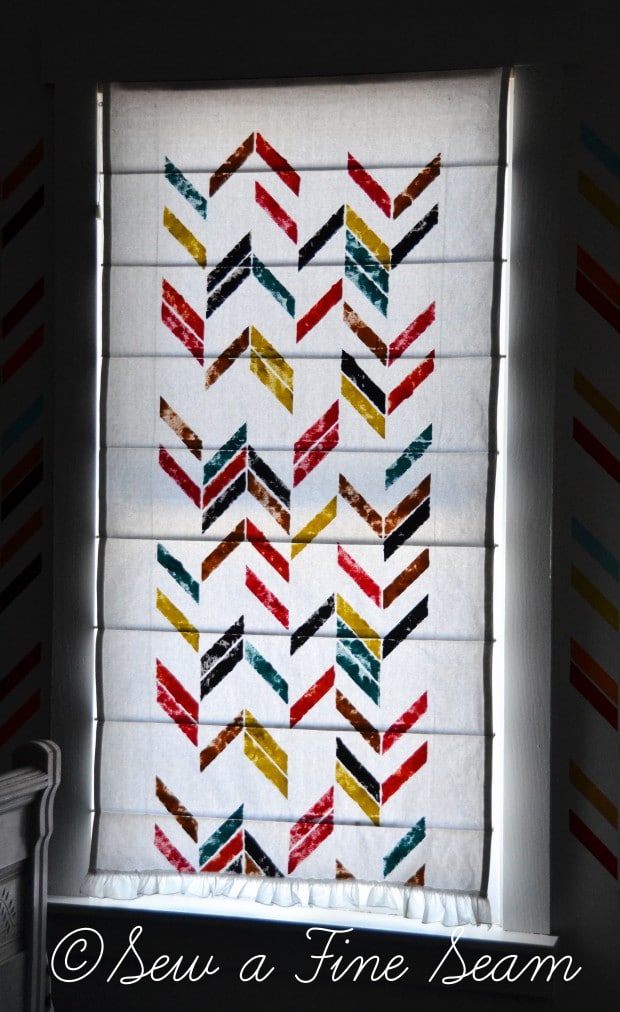 Here is the shade hanging at the window.  Now let’s look at some close-up shots of how it went together, how I painted it and some of the less-than-perfect areas. 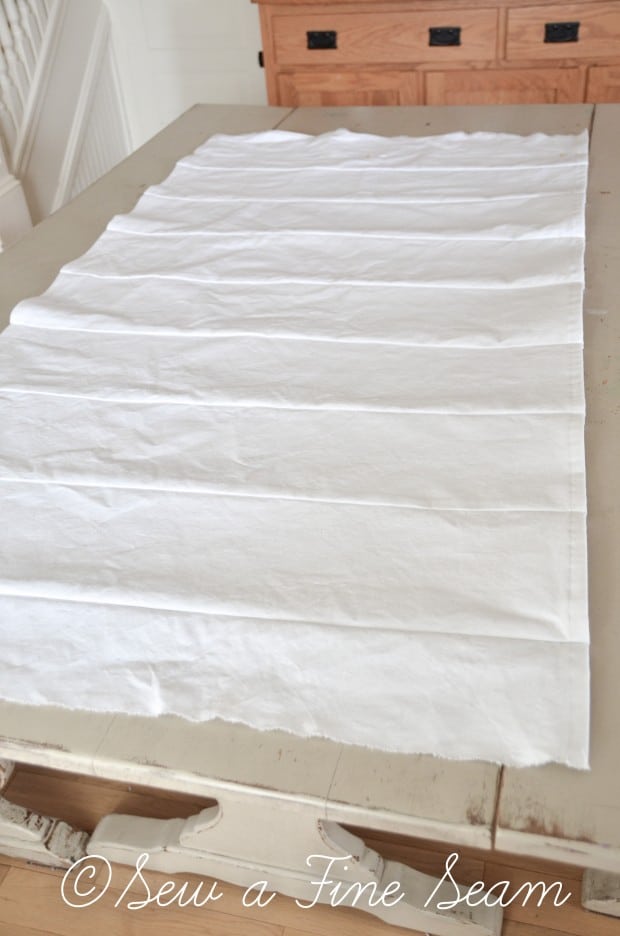 I stitched the Roman Shade the same way I did the first one I put in their room.  And yes, I did go back and use my own tutorial 😀

A couple things I might add about making this Roman Shade.  The fabric I used for this one is Duck Cloth and is significantly heavier weight fabric than the cotton fabric I used for the first one.  I would recommend giving yourself more length allowance for heavier fabric.  Also a bit extra on the width.  Not much but a half to one inch.  I cut the length and width the same and used the same seam and hem allowances but it ended up a bit shorter and just a little narrower.  Nothing I couldn’t live with and I added a ruffle to the bottom for extra length which I love so much I’m happy it turned out I needed to think of a way to add a bit of length. 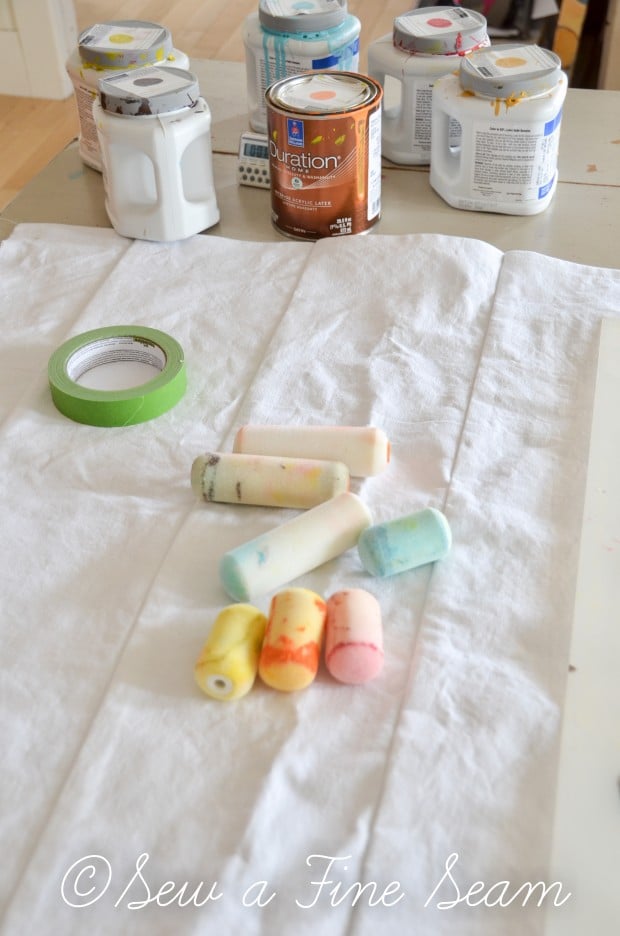 I used the same foam rollers I used on the wall.  Glad to finally have this project done so I could throw the rollers away instead of having them laying around IN the way! 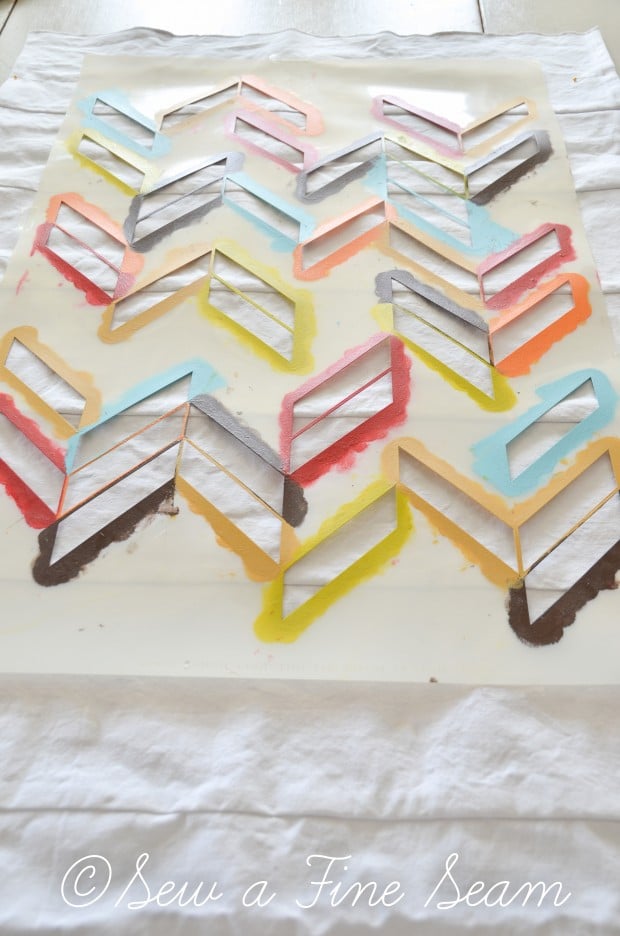 I positioned the stencil by holding the shade up to the window and just eyeballing it.  It isn’t a perfect match up to the wall but it was good enough for me 🙂 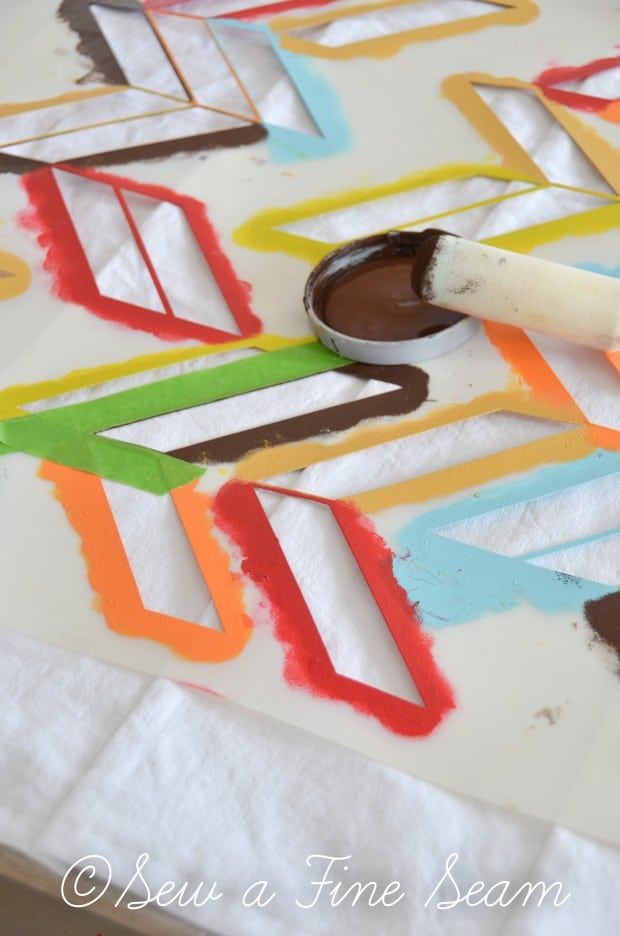 Just like on the wall I used Frog Tape  to tape off the spaces right next to the space I was painting.  If you’ve never used Frog Tape you really should.  I’ll never go back to any of the regular painter’s tape now! 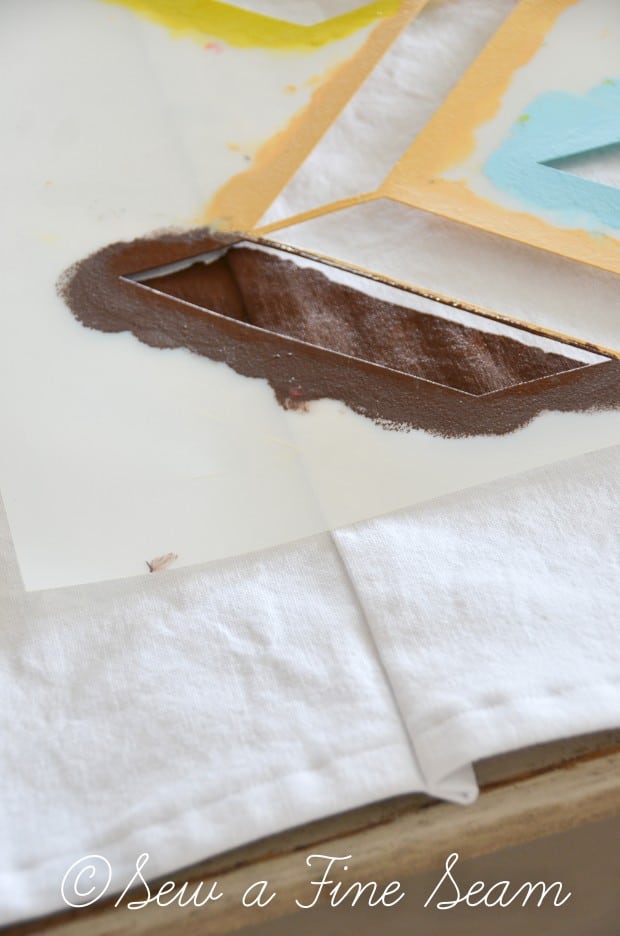 I painted across the seams I’d made when sewing the spaces for the dowel rods that are part of the Roman Shade construction. 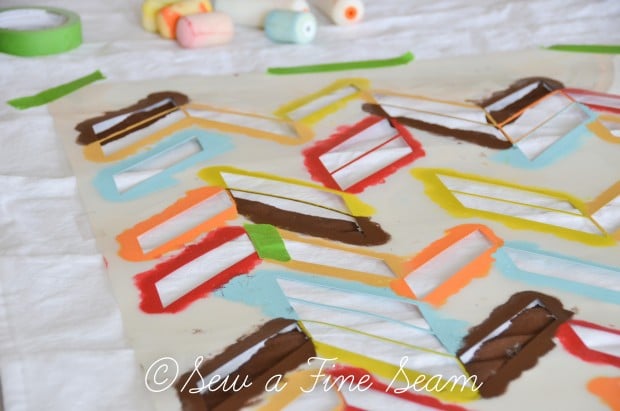 I painted of one color before moving on to another. 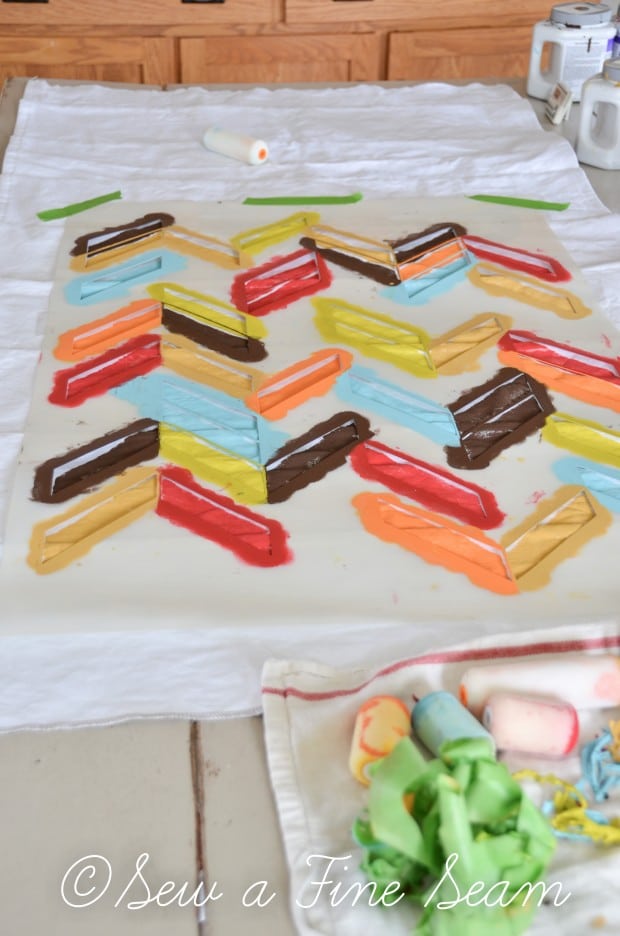 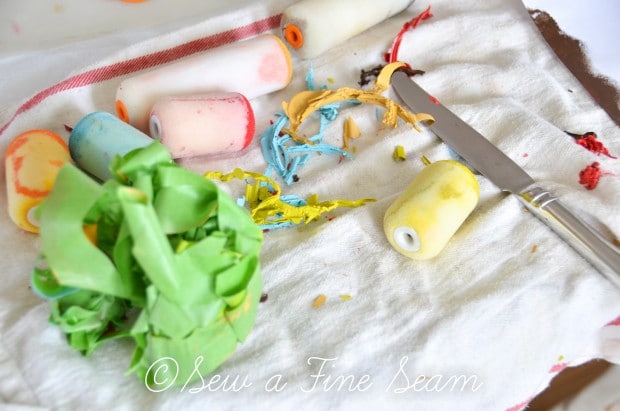 Lots of Frog Tape and lots of dried paint that needed scraped off the screw-on lids of the sample quarts of paint I used for the wall stencil project. 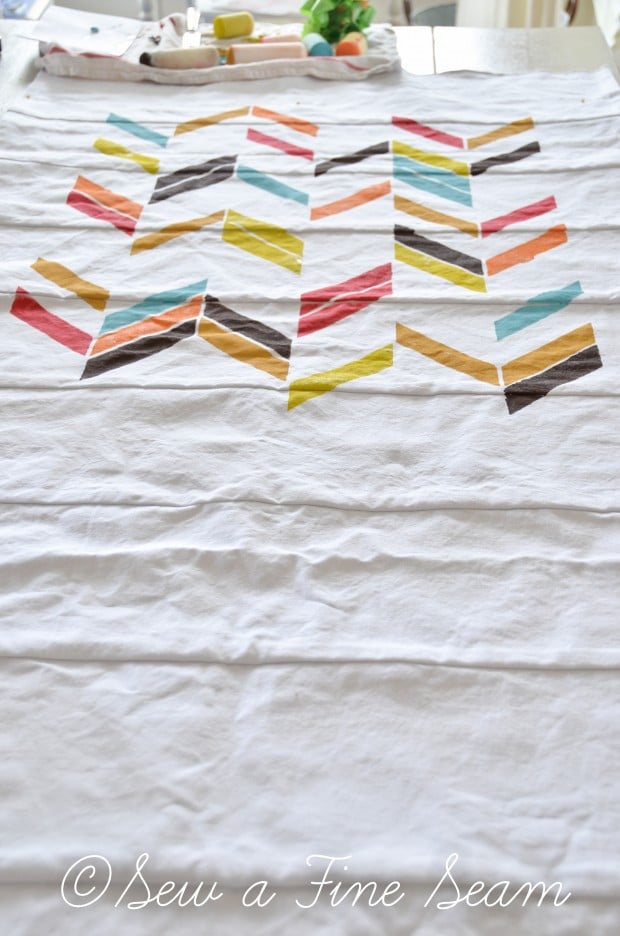 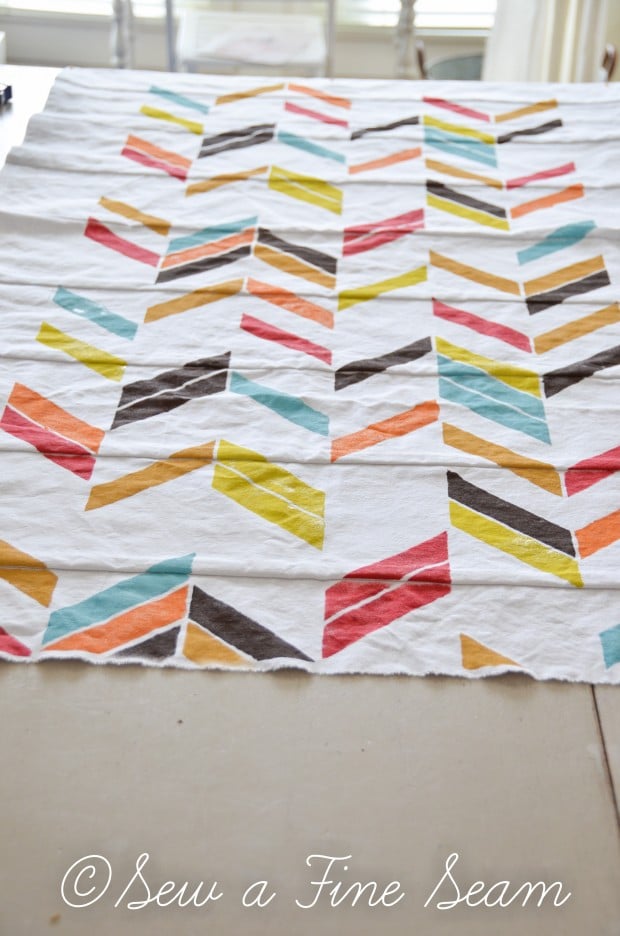 This stencil is very easy to line up when making the lower part of a long length.  I love Royal Design Studio Stencils! 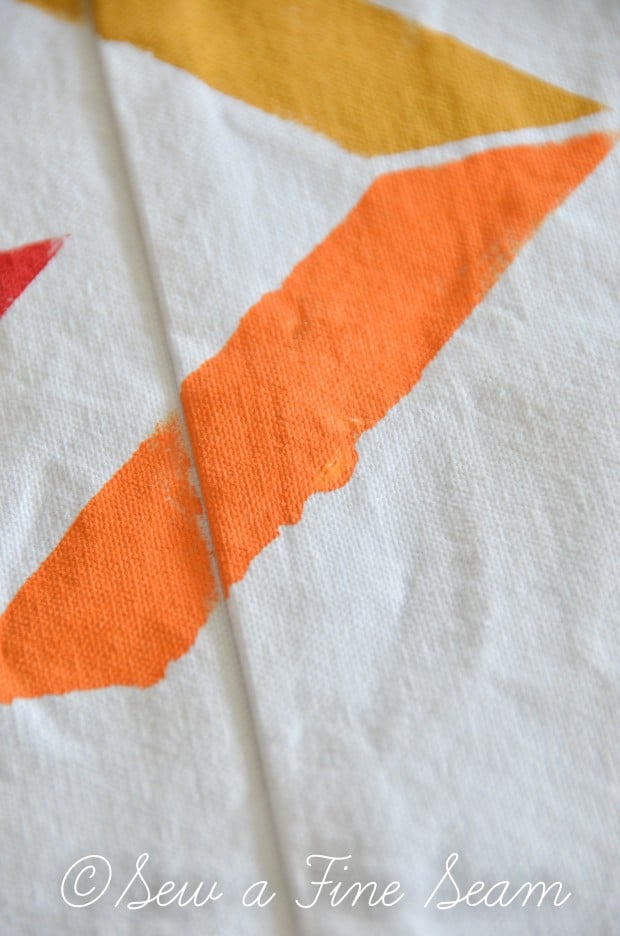 Now let’s take a close-up look at some of the not-so-perfect areas.  Nothing I can’t live with and they honestly don’t stand out now that the shade is hung.  But you can see how I got some paint bleeding under the stencil. 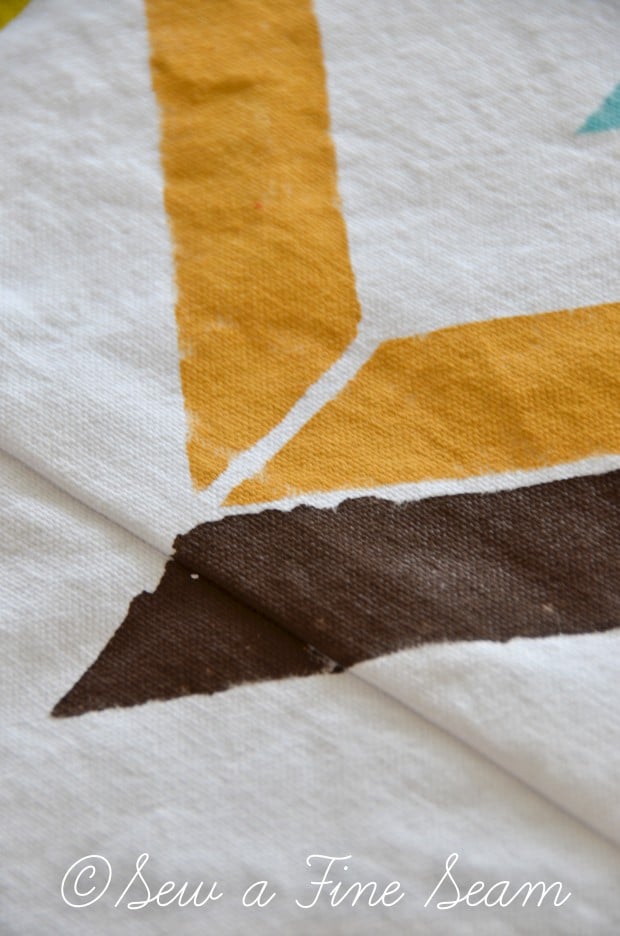 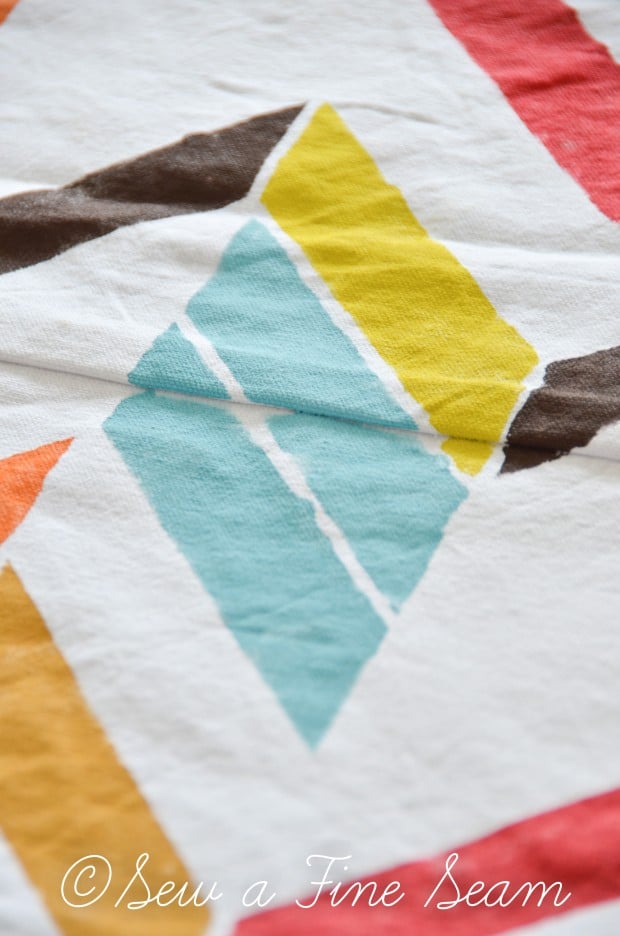 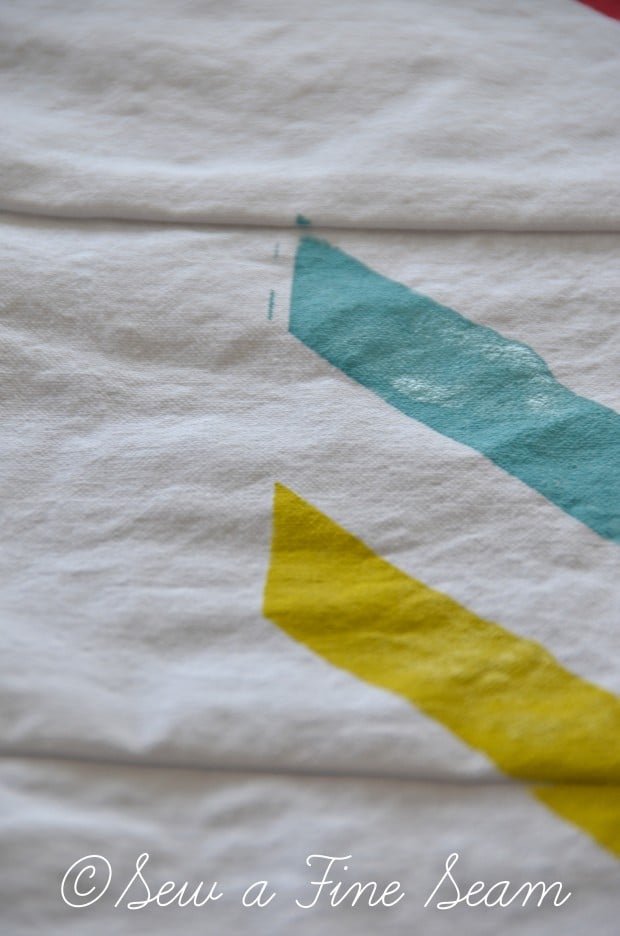 On this one I forgot to tape over the small lines cut in the stencil that are part of the way you line up for the next section of stencil.  Again, I can live with it, but someone who is a bit more picky might want to make sure all those are taped over before painting.  I forgot a couple times on the wall too but on the wall I just painted white back over those spots.  Painting on fabric you are pretty much stuck with what you end up with 😀 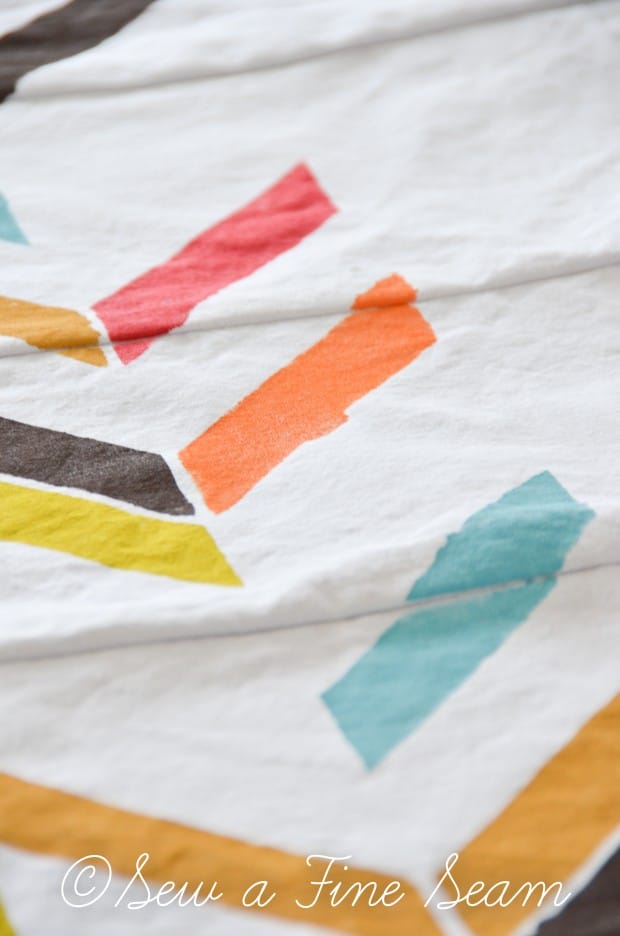 Honestly the bleeding under the stencil edges has NOTHING to do with the stencil performance and EVERYTHING to do with me and my impatience to get the job done!  To get a clean lined stencil you need to use small amounts of paint and take your time!  I have a real struggle taking my time with things – I want to get in there and just get it done!  This project was extremely that way as I’d put it off to the very last minute and needed to get it done so I could get it on the blog.  I think perhaps I need someone to want to feature my kitchen so I get a deadline for getting my cupboards painted! 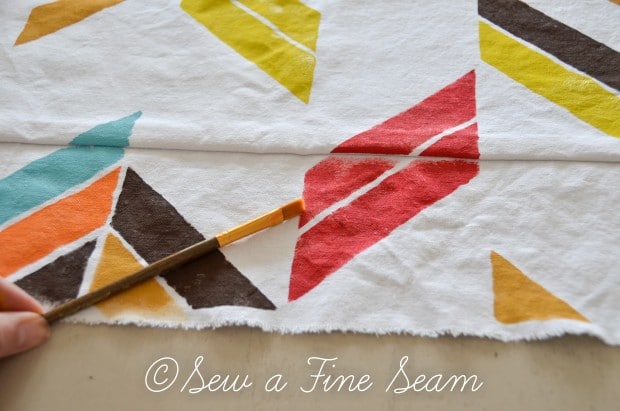 In the places where the stencil overlapped the seams it was almost impossible to get the paint into the crease of the seam.  I soon quit trying and just let it go and then went back and filled it in using my artist brush. 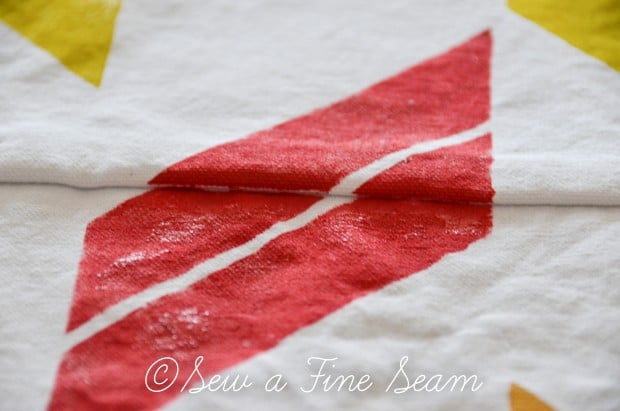 Here’s a look at this stencil block after I used the artist brush – you can compare to the pic above to see the difference. 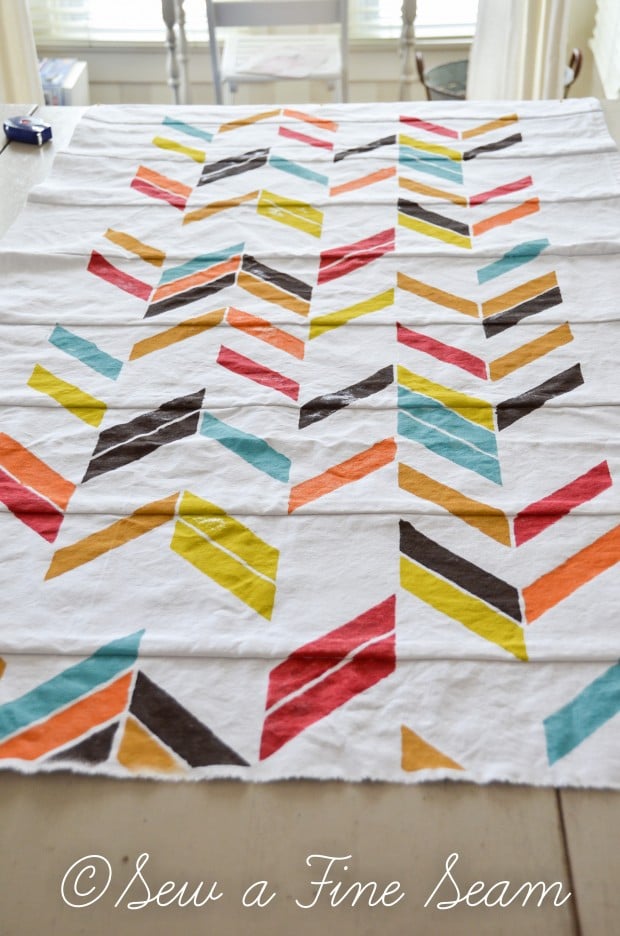 Painting finished!  I did make myself go do something else and let it get good and dry instead of trying to finish it up before the paint was dry. 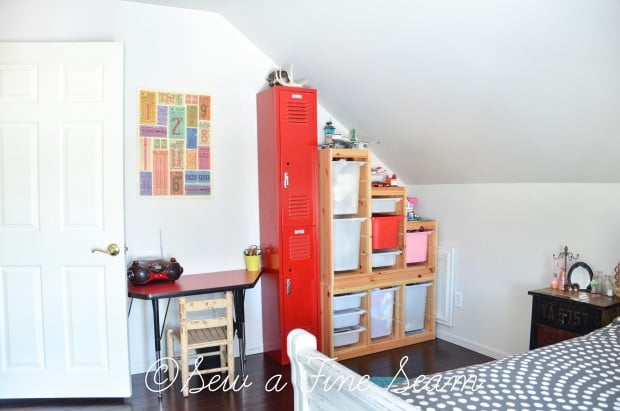 Several people mentioned how clean my girl’s room looked.  I laughed every single time!  Looks are SO deceiving sometimes 😀  I should have taken pics of this room the night before I wanted to do this photo shoot.  The floor was covered – and I mean completely covered – with legos and laundry and stuffed animals and books and… I’m sure if you have kids in your life you can imagine.  Let’s take a closer look at some areas of this room – and I’m gonna open those closet doors – just keeping it real folks! 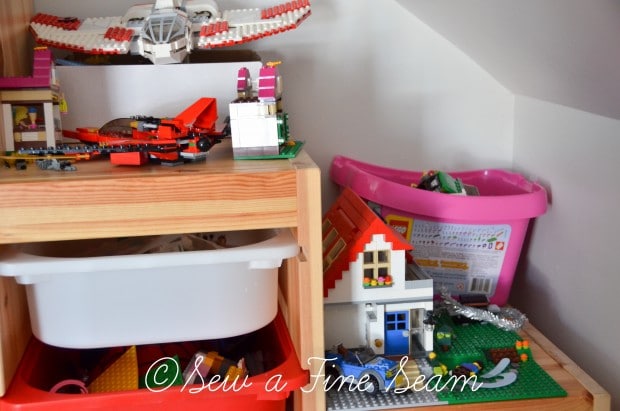 If you get close-up to this IKEA storage unit you will see the boxes tucked back behind the Lego creations.  And the overstuffed bins. 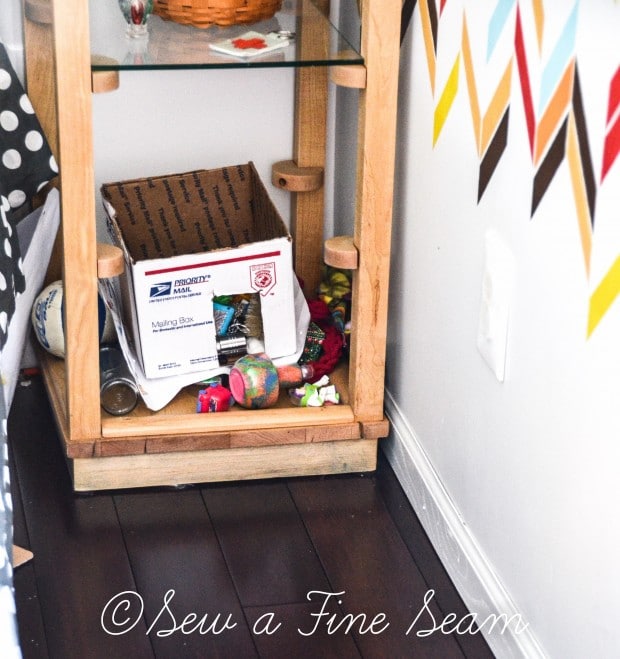 Becca’s side of the bed – the lower part of her nightstand.  I styled the top two shelves that would show in my pics but left the bottom and even added to the mess by piling stuff from the top shelves down there.  And see that bit peeking out from under the bed?  I didn’t take pics of under the bed because lighting just wasn’t good enough but take my word for it – there is a LOT of stuff under there that isn’t supposed to be.  When I was doing the shoot and something under the bed was in the shot and I asked Larke to take care of it she shoved it farther under so it didn’t show.  Sigh.  I’d have done the same so i just shook my head and kept shooting photos. 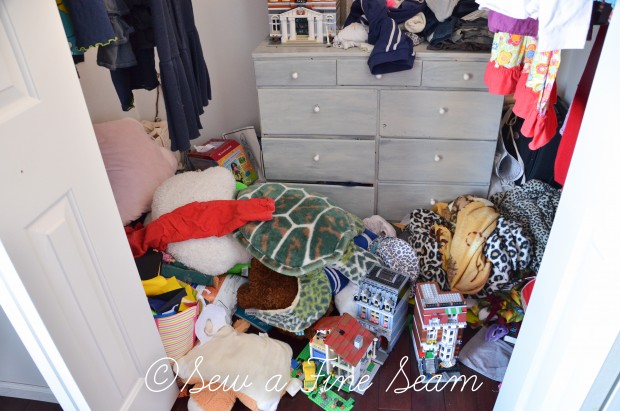 And the closet.  Those Lego creations usually sit on the chest at the foot of the bed.  I managed to find room to shove them in the closet with all the stuff my girls had already stashed there.  So there you have it.  Keeping it real.  A bit of the behind-the-scenes of a cleaned-up-room-reveal 🙂 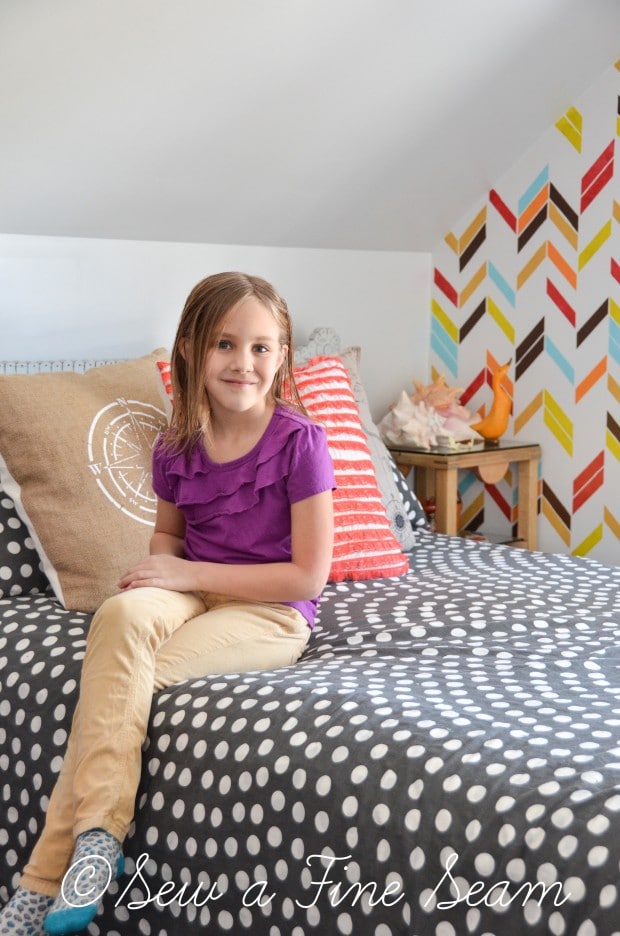 My girl’s begged for some shots with them included so I obliged once I had all the shots I wanted of the room. 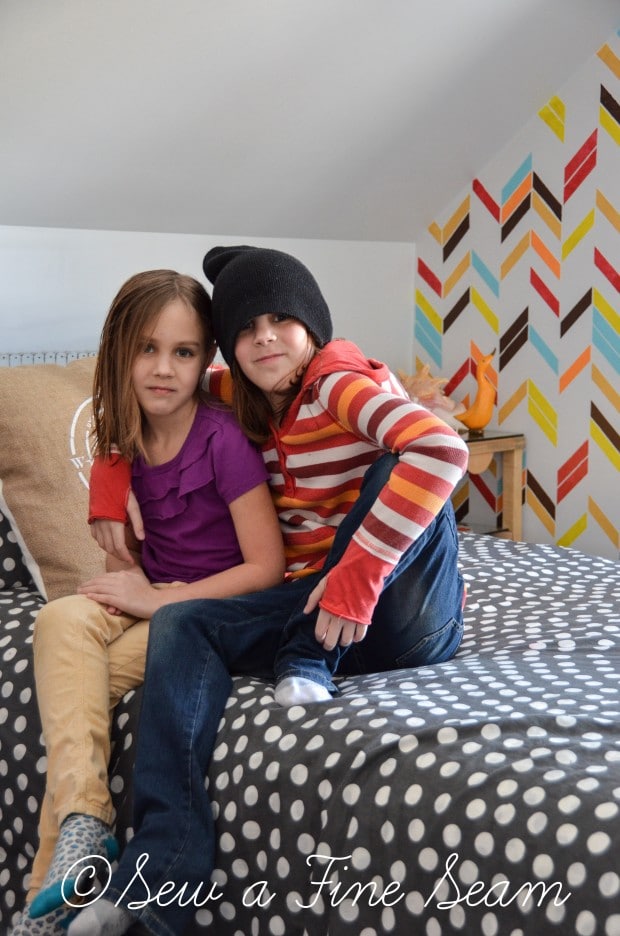 Miss Larke loves to wear that sock hat – cracks me up!  She’s such a tomboy-trying-to-grow-up-into-a-lady lately. 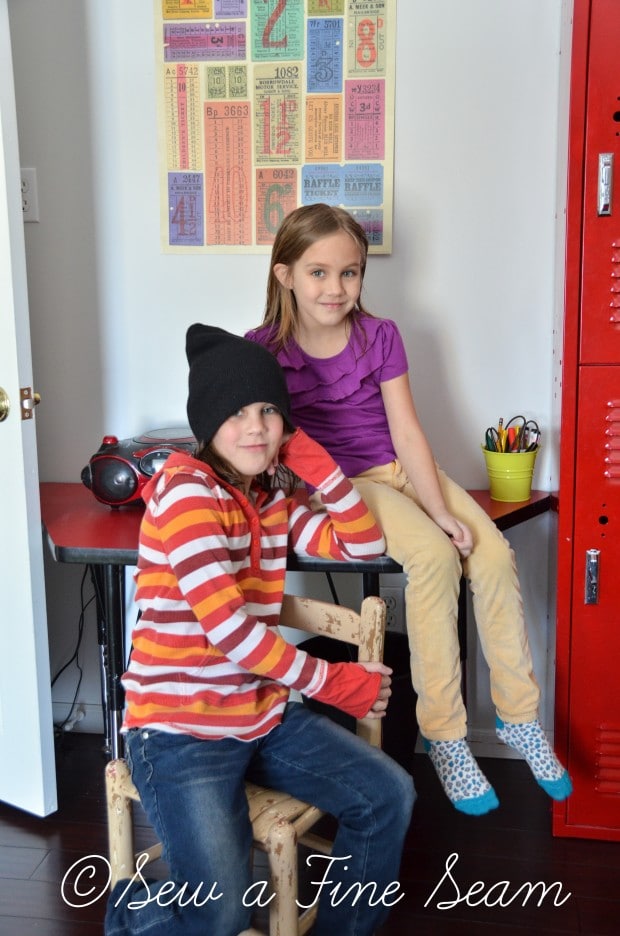 And even though their room isn’t always neat and tidy, I’m getting more and more ok with it.  We live here.  It’s their space.  They have fun in it.  As long as they clean up enough to get the floor swept now and then I’m good.  I do like to see it cleaned up and organized every so often because they play better when it’s not such a huge mess. 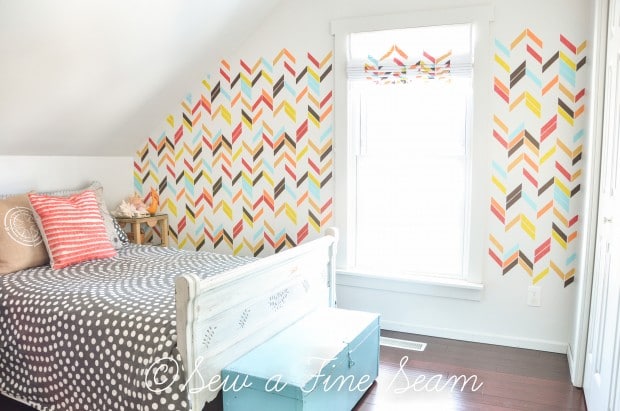 Have a wonderful week and remember that we all ‘live real lives’ not just the perfectly styled and organized ones we show in most of our pics!

Sign up for all the Strawberries and Cream from Sew a Fine Seam! (discounts, news, shop openings, info and more!)
« Union Jack Pouffe
Homemade Laundry Soap »