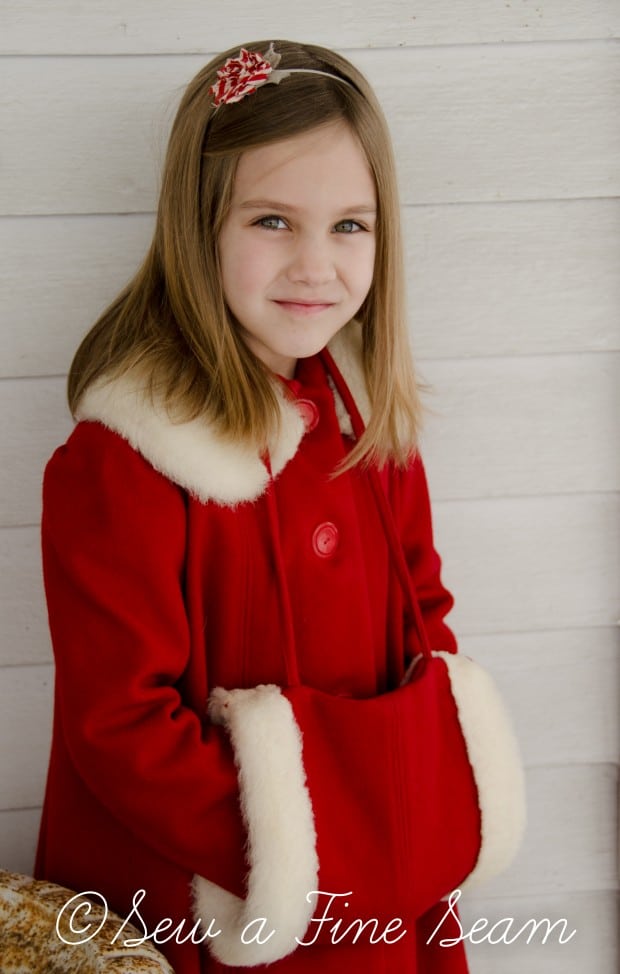 Once there was a little girl who had a red wool coat and muff.  She wore it till she outgrew it, and then it was handed down to some of her cousins. 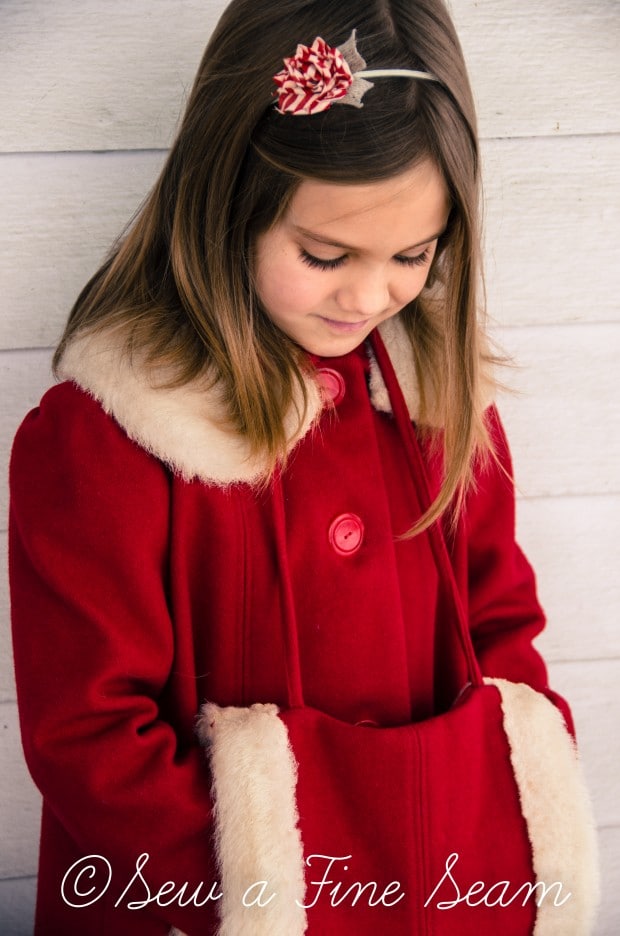 When it had been worn by everyone who needed a red wool coat and muff, it was put into storage in a closet at Grandma’s house. 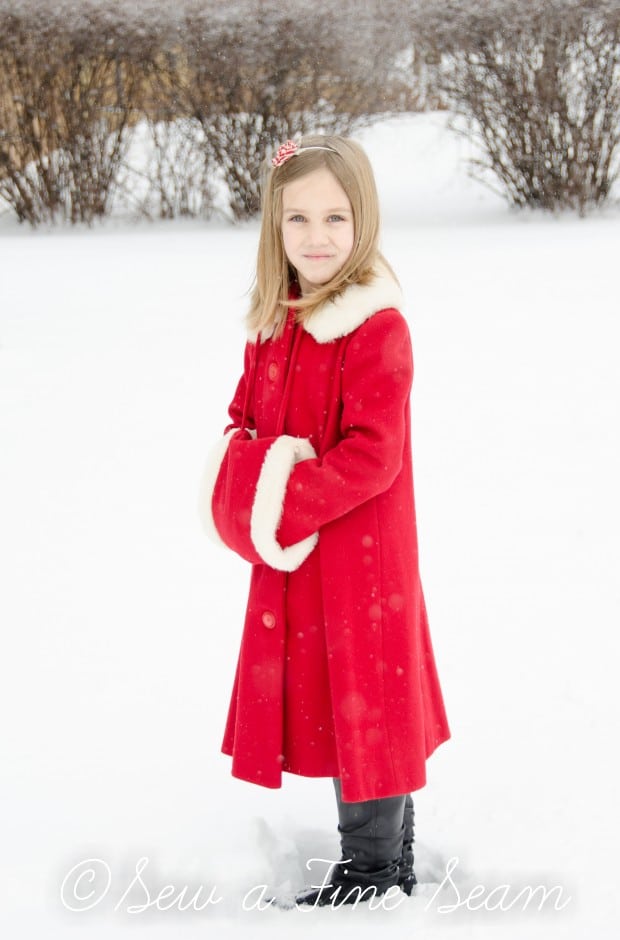 Years later, when the girl’s Mom and aunts were going through things at Grandma’s the red wool coat and muff were discovered in the back of the closet. 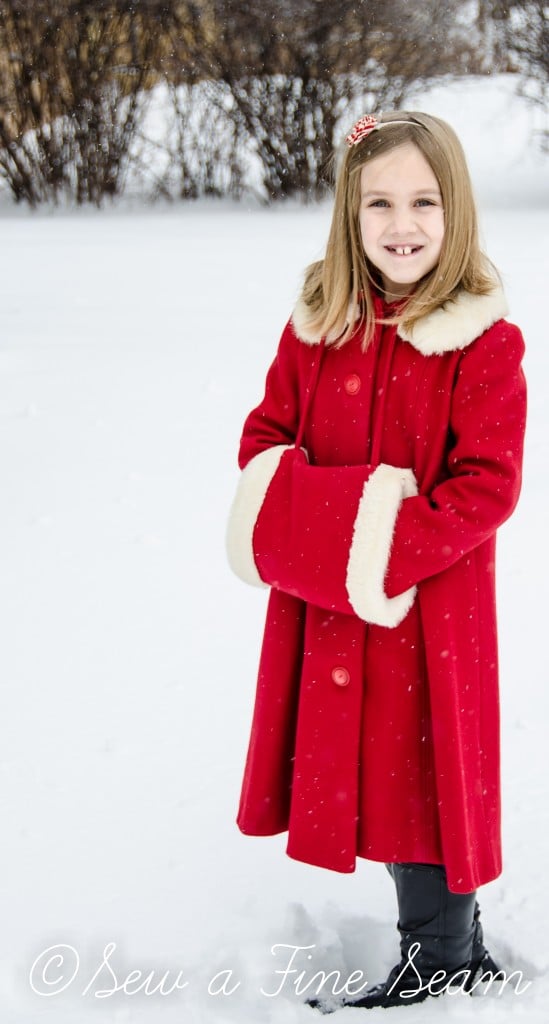 And that’s when MY Mom told me about the red wool coat and muff. 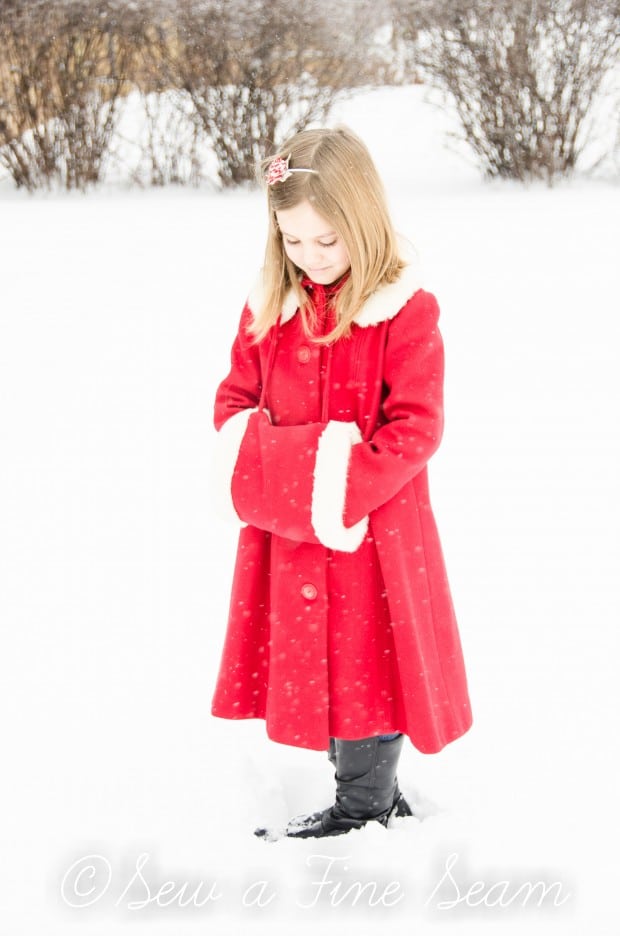 You see the girl the coat belonged to is my cousin.  And the Grandma who ended up with this darling set was my Grandma too. 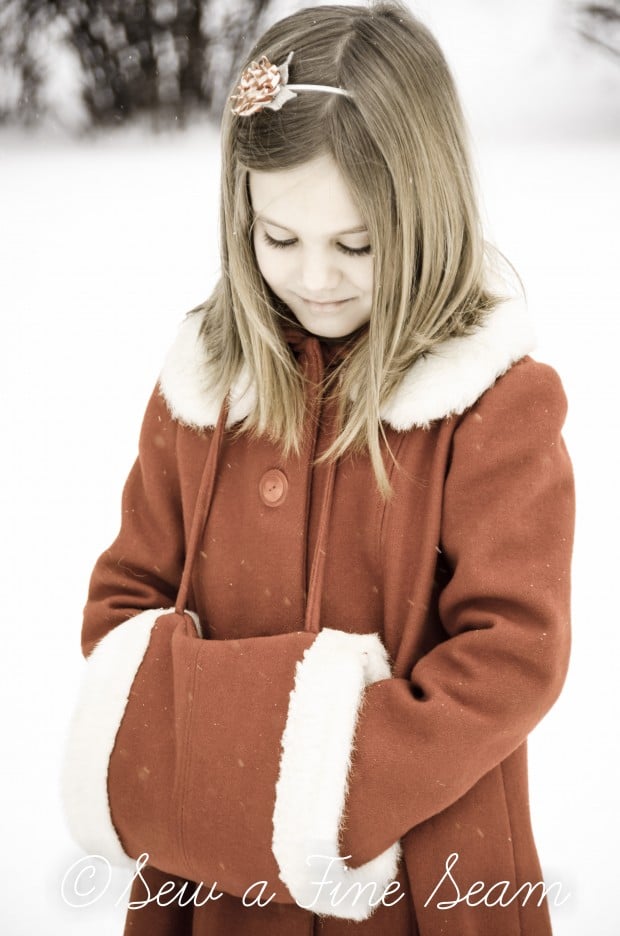 Sight unseen, I declared that if my cousin didn’t want the coat and muff I did. 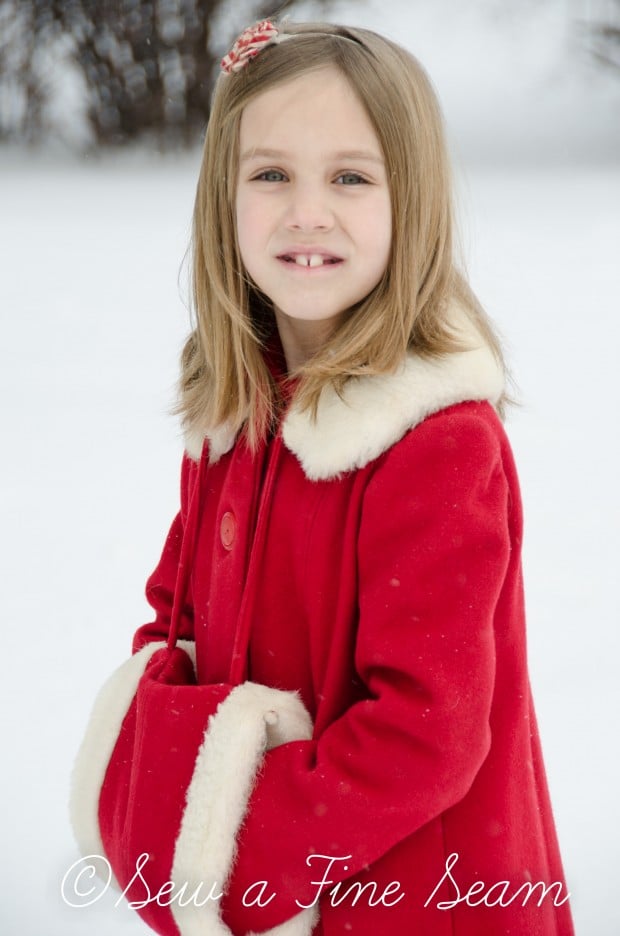 And the next time my Mom came over she brought the red wool coat and muff with her. 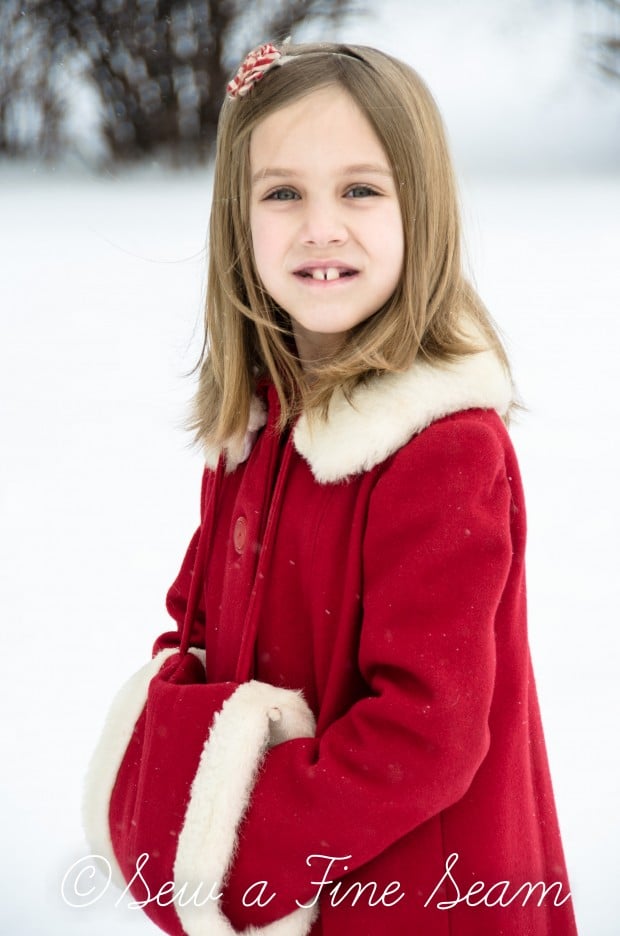 My girls were not impressed with the absolute adorableness of the set, nor did they appreciate the fact that they are vintage. 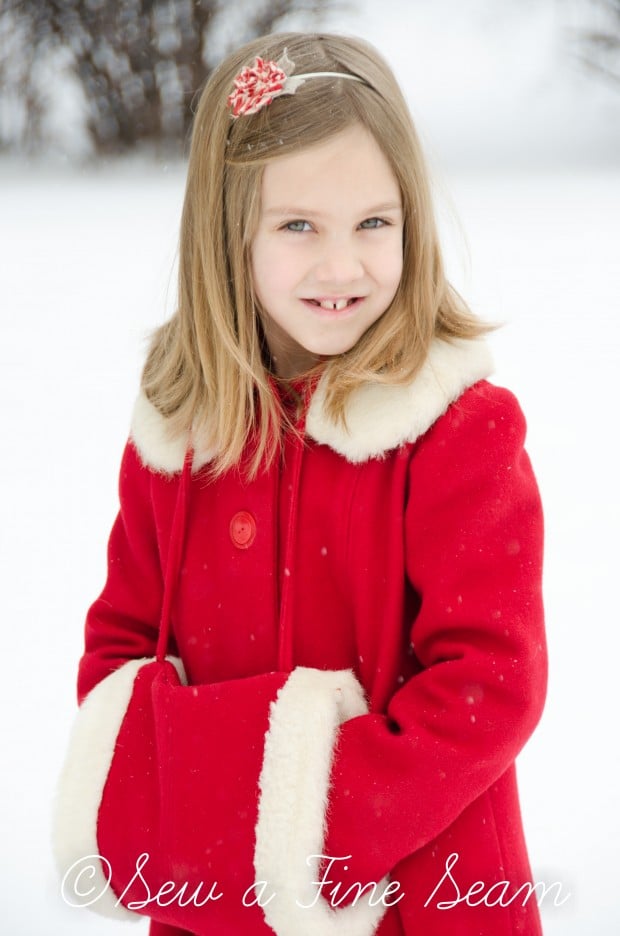 The red wool coat and muff hung in the back of my girls closet this year, sadly neglected, as my girls prefered their down coats from Land’s End.  (can’t say I really blame them – wool is itchy) 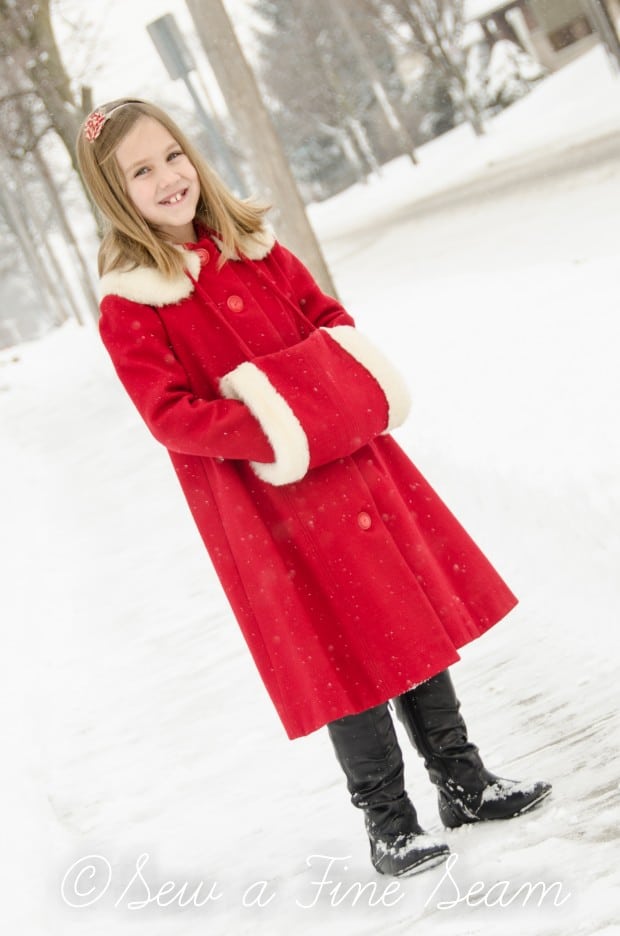 With all the snow we’ve had this winter I kept thinking I really should do a photo shoot with my 8-year-old wearing the red wool coat and muff. 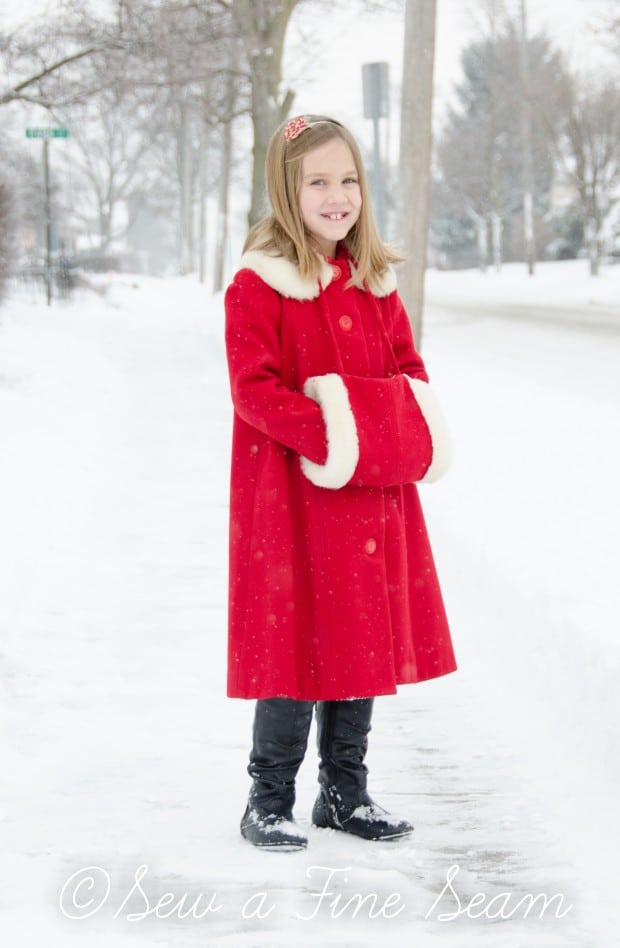 Finally one day I suggested it, and after some persuasive talking, we bundled up and headed out into the cold and snow. 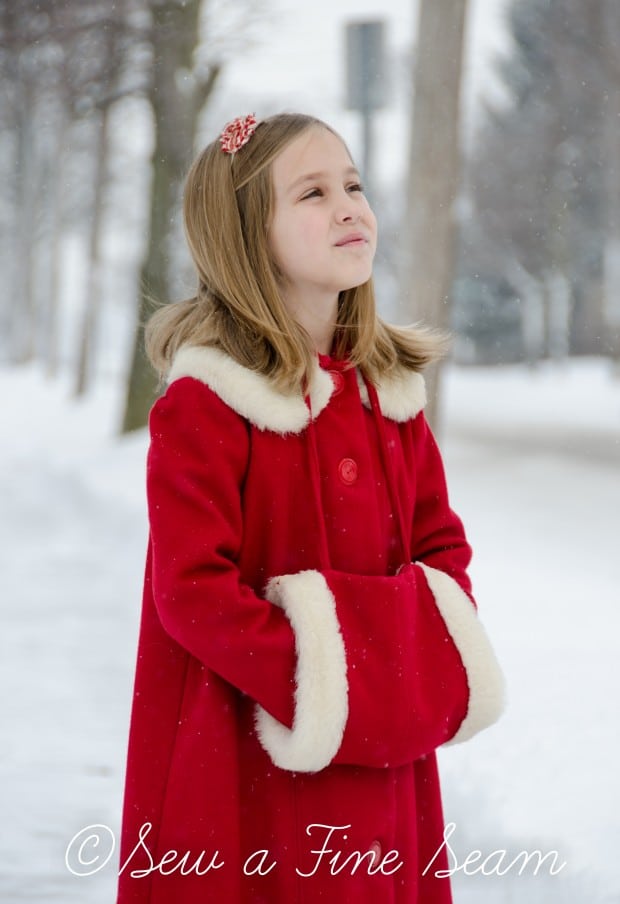 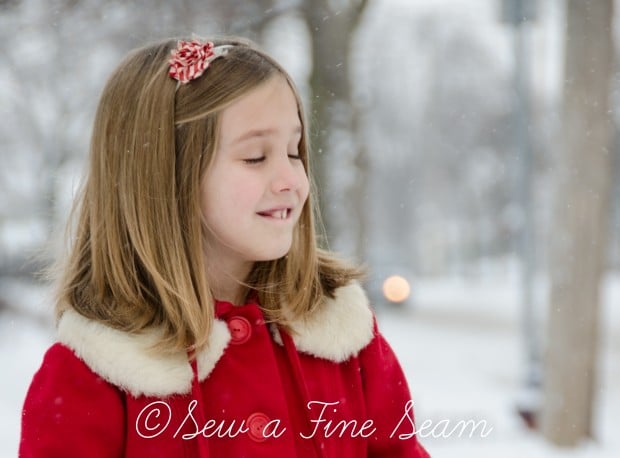 ‘Mom it’s too bright to keep looking up!  And the snow is getting in my eyes!’ 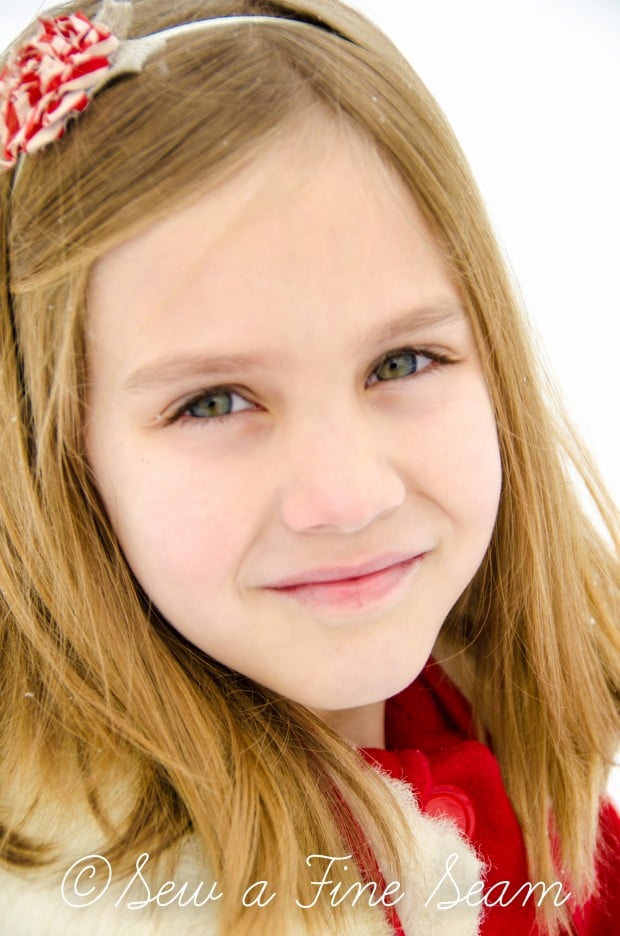 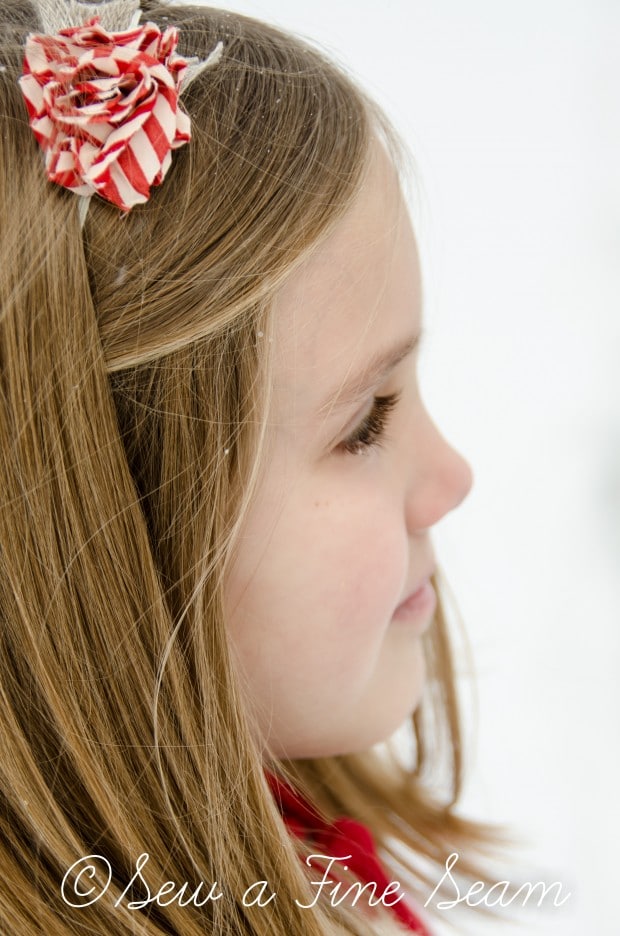 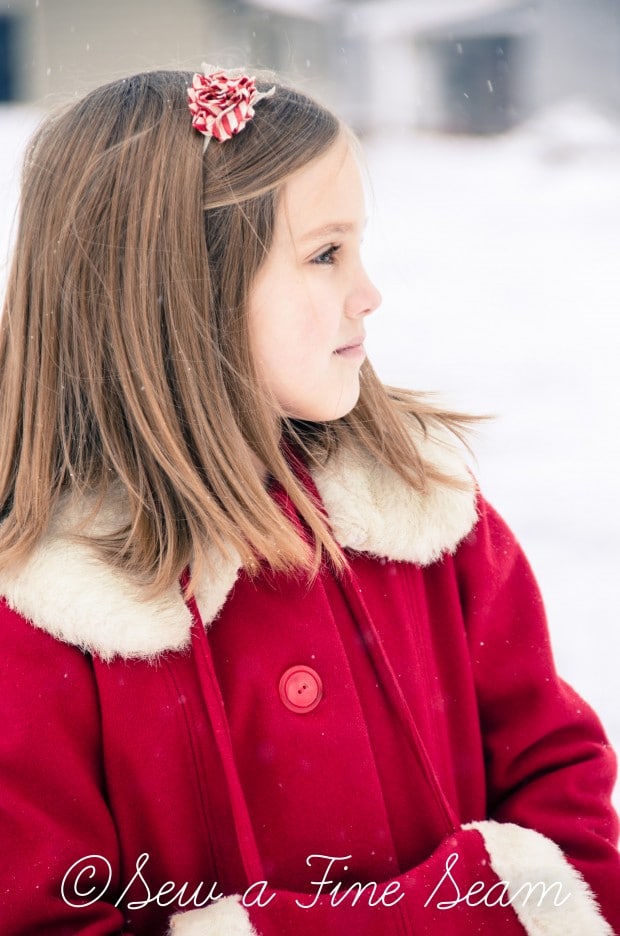 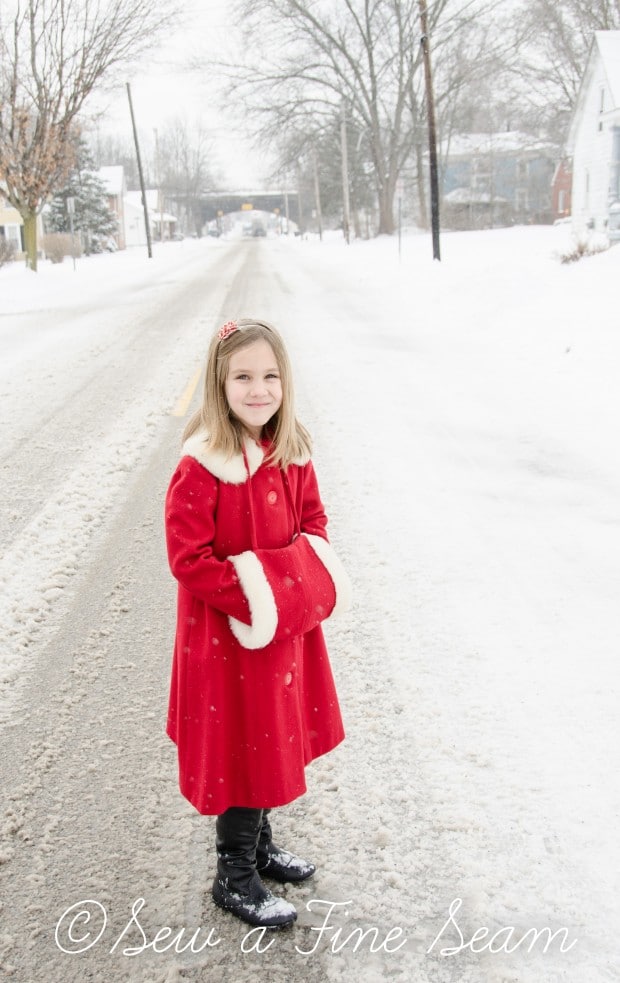 She got a little nervous when I told her we were going to go out in the road.  I assured her that I would be out there with her, there wasn’t much traffic, and the traffic that was out was moving slowly and I would keep an eye on it! 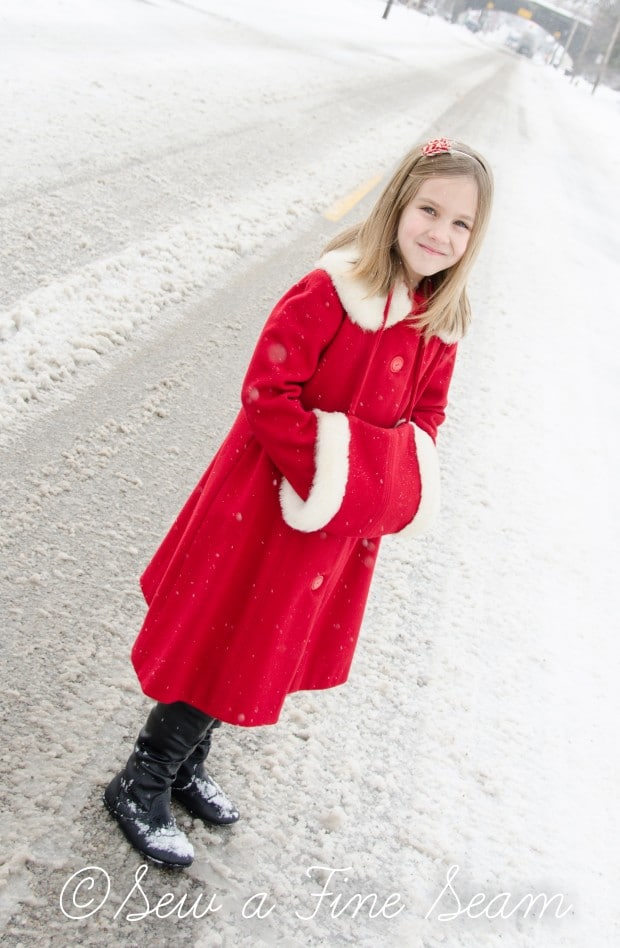 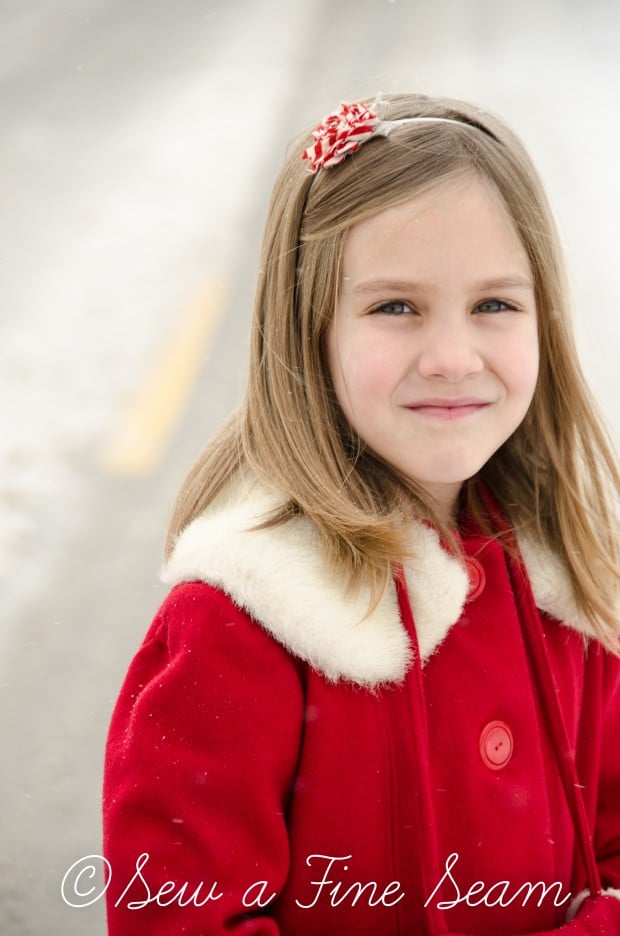 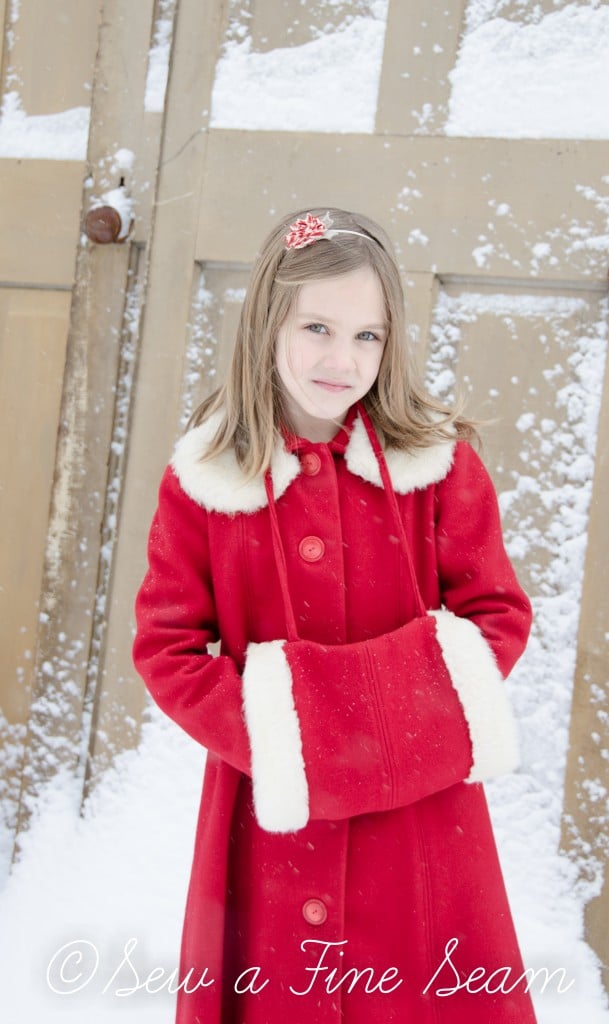 After we finished the ‘road’ pics we took a few behind the garage where I have some doors that I got right before it snowed.  They are old interior doors and really should be inside somewhere instead of outside in the weather.  But there they sit and they made a rather nice backdrop. 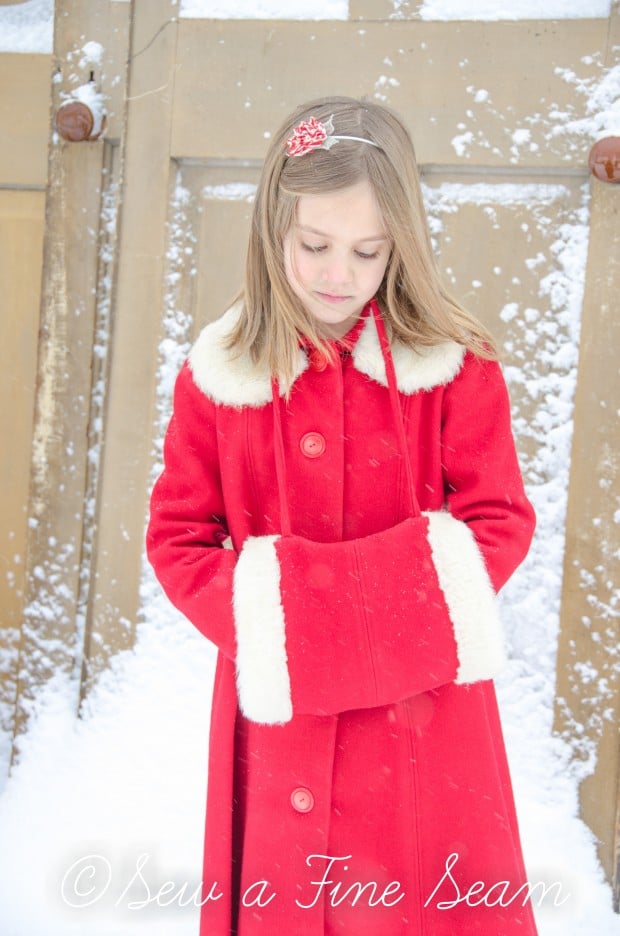 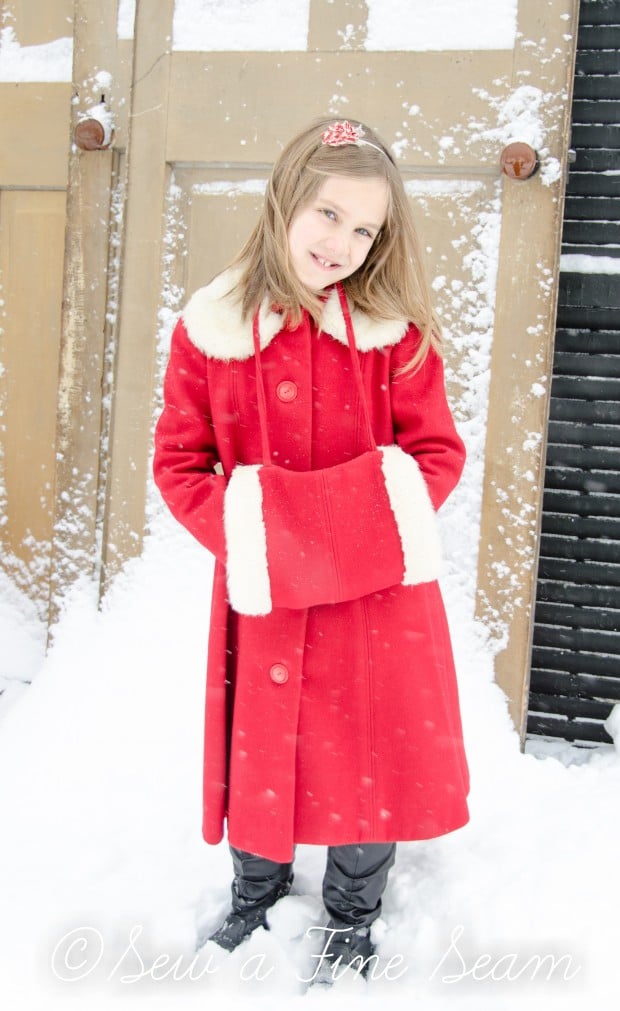 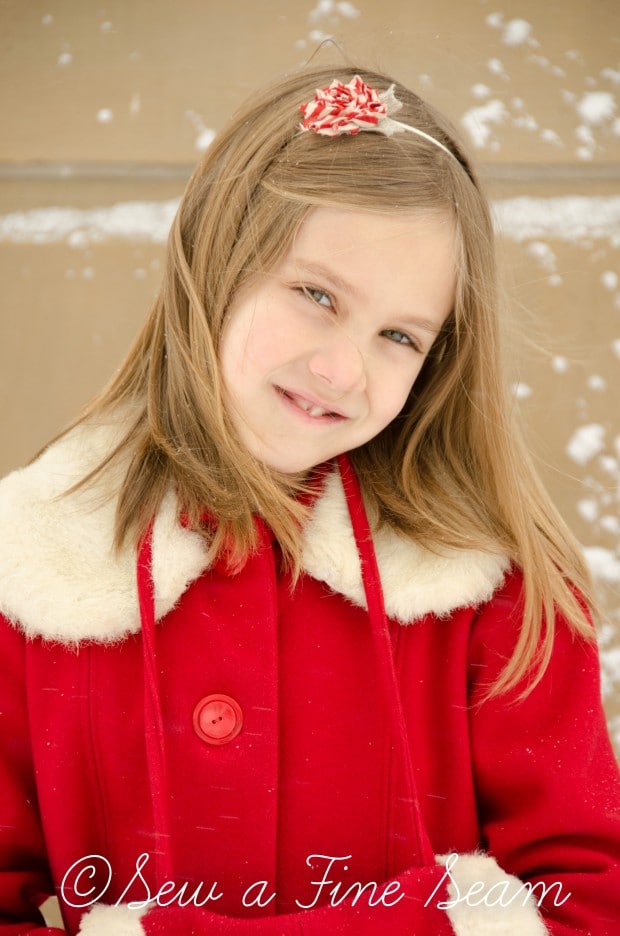 We weren’t out long, it was cold and the wind was blowing.  And Becca kept saying the coat was itchy.  But the red wool coat and muff got a moment to shine again and I got to practice a bit of photography and take some fun snow shots of my ‘baby’.

There is another wool coat that came along with this red one.  It is a pretty, vintage plaid.  It is a bit larger and would fit my Middle Girl.  So far I have not convinced her to wear it and let me photograph her in the snow.

Do you like vintage clothes and using them for photographs?

Sign up for all the Strawberries and Cream from Sew a Fine Seam! (discounts, news, product launches, info and more!)
Be the first to know about new tapestry wall hangings, boho throw pillows, seasonal home decor and more.
« Ruffled Ottoman
Girl’s Room Reveal »