Last year my family went West for Christmas and spent a week and a half at my Sister’s house.  We did some after-Christmas shopping and I found some large Nutcrackers 75% off.  I bought four of them and paid less than one of them cost regular price.  They made the trek back home to Ohio and spent the Spring, Summer, and Autumn tucked under a table in my bedroom.  I dug them out as I was feverishly getting Christmas stuff ready to be delivered to the shops I was putting my handmade items.  I had grand plans for them.  I really did.  But as happens so often I tried to do more than was humanly possible for me to do.  I did detail one and took it to one of the shops, another is displayed in my home, yet another is painted white but still needs one more coat of paint, and the 4th is still languishing in his box.  Maybe next year… 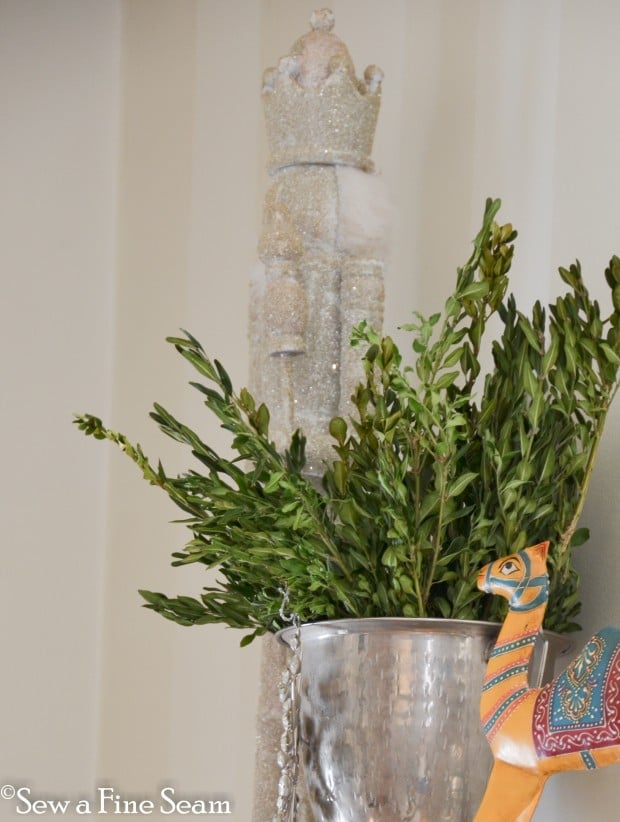 I did want to give you a quick tutorial on how I glittered the Nutcracker I have in my entryway.  I was going to take pics and show you each step in a pictorial tutorial but I just haven’t had the time.  So I’m going to show you the before pics and the after pics and tell you how to do it – it’s really very simple. 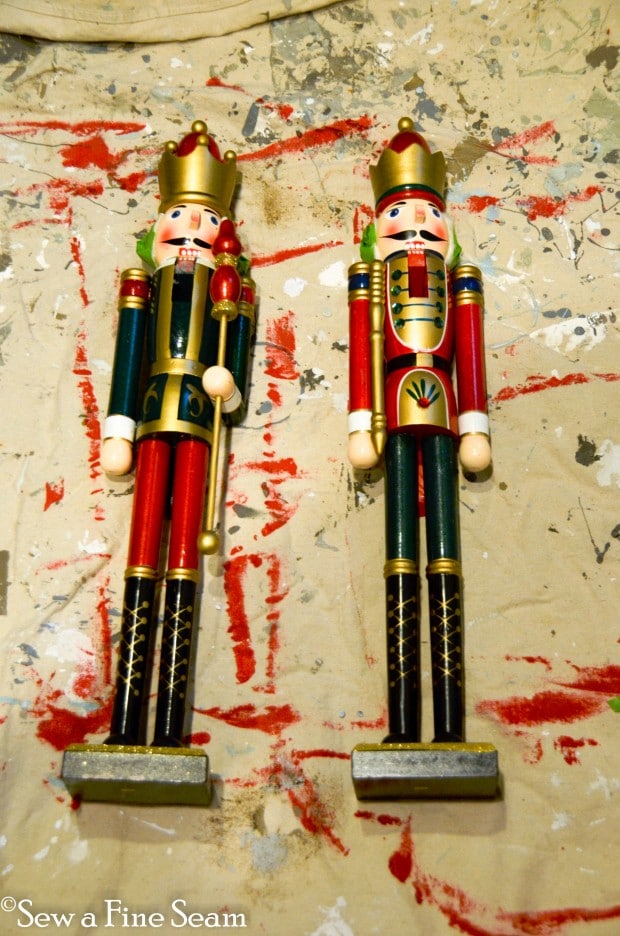 This is how they began their life.  Brightly painted in primary colors – traditional Nutcrackers.  Don’t they look so cute against my well-used drop cloth?  I spray painted these 2 white.  I was not impressed with the spray paint.  It was supposed to be some new stuff that worked as a primer and paint all in one.  Not so much in my opinion.  It took way too many coats to get them covered and honestly they weren’t completely covered at that.  The first one I did before these 2 I used Annie Sloan Chalk Paint.  That worked wonderful but took a long time to brush on.  If you want to spray paint some of these for yourself use Rustoleum spray paint – I will never deviate again – just pay the extra price for the good stuff. 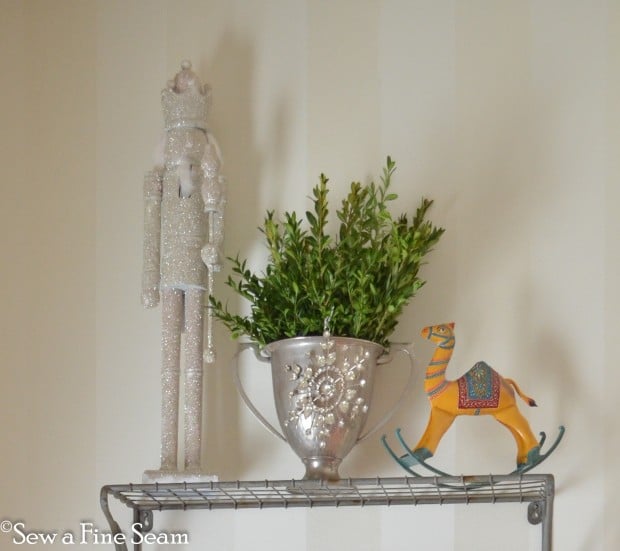 After the white paint is dry it’s time to cover him with glitter.  I used German Glass Glitter because it’s my favorite and I love how it ages to a dark antique look.  You can buy German Glass Glitter on Etsy.  I used E6000 glue – you can buy it Jo-Ann Fabrics or any craft store.  I used an artist’s brush to put the glue on – just painted on an area of glue and then shook glitter over it.  I used a piece of paper under where I was working so I could easily dump the extra glitter back in the bag to be used again.

You could use Elmer’s school glue for this project – Elmer’s would be easier to spread with a paint brush!  If you use the E6000 plan to throw your brush away when you are finished – it will be ruined.  You will not be able to wash out the glue that is in the brush and it will harden completely stiff. 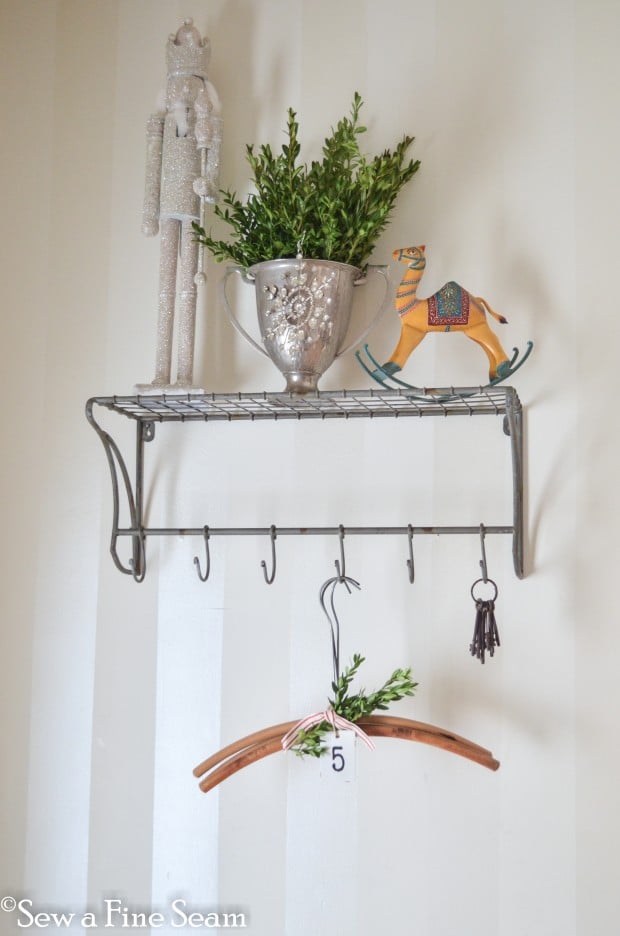 I love how tall and thin these Nutcrackers are and the glitter just makes them a bit different from all the others out there. 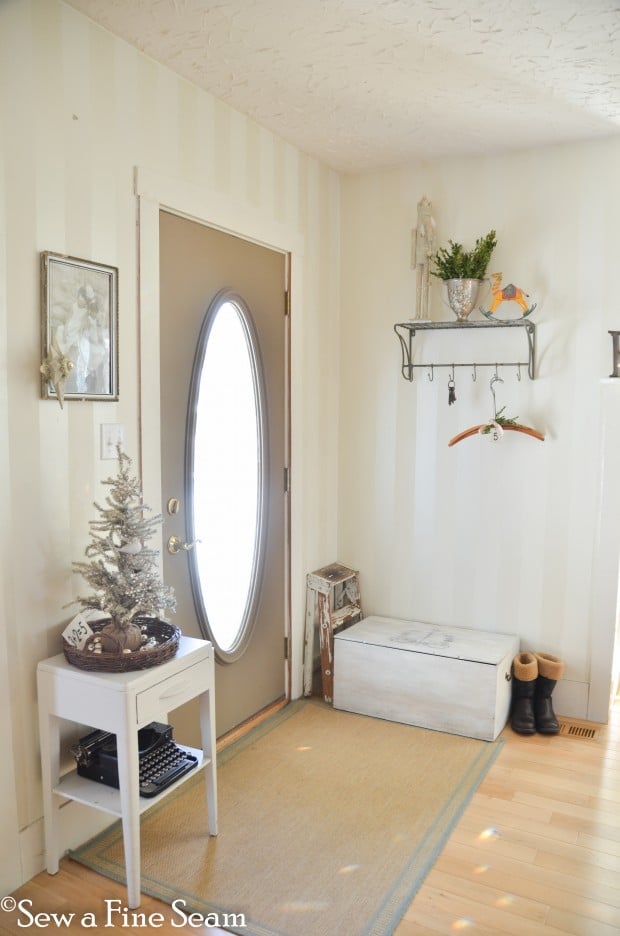 So there you have it – a written report of how I covered my Nutcracker with white paint and German Glass Glitter!  If you have any questions please ask – so sorry I didn’t get it pictorially documented like I planned – somehow there just are not enough hours in the day and there is only one of me 😀

Sign up for all the Strawberries and Cream from Sew a Fine Seam! (discounts, news, product launches, info and more!)
Be the first to know about new tapestry wall hangings, boho throw pillows, seasonal home decor and more.
« Holiday Home Tour
Tips on Christmas Decorating »