Before I share my Antique Grain sacks and other Vintage Finds I have to admit that I crashed this weekend.  As you know, just over a week ago was The Vintage Marketplace at the Springfield Flea.  After a totally overworked 3 weeks of prep, painting, sewing, and planning on top of school, laundry, and all the other normal everyday things that make up the life we live, we loaded up and hauled it all to the flea, set up, and spent 3 days there selling all the fun things we’d amassed.  Then we loaded up the bits an pieces that didn’t sell, hauled them home, put them away and headed straight into the next thing – the yearly, fall children’s clothing sale I help host with a friend.  I went through my kid’s clothes, prices stuff, hauled the best vintage stuff to a store here in town to put it up for sale and added a few leftovers to my garage sale pile.  And spent Thursday and Friday at the sale running it with my friend.  It was a busy, profitable sale.  I spent several hours on Saturday running to the bank to cash checks and then doing all the book work involved with a garage sale that involves over 50 sellers.  By the time I was finished I was done.  As in hit-the-wall, can’t-go-anymore, don’t-even-LOOK-at-me done.  I tried to nap but the other inhabitants of this house wouldn’t let me.  They wanted some supper fixed – of all things.  So I fixed supper and began to snip and snap at everyone.  I had crashed.  And it was time to sequester myself away where I could do no damage!  So I did.  I slept as good as I could and buried my head under the covers while my husband and teenager headed off to church on Sunday morning.  I was in no mood to put on a good face and act like I was just fine.  I think I would have failed anyway and probably would have been grumpy or in tears. 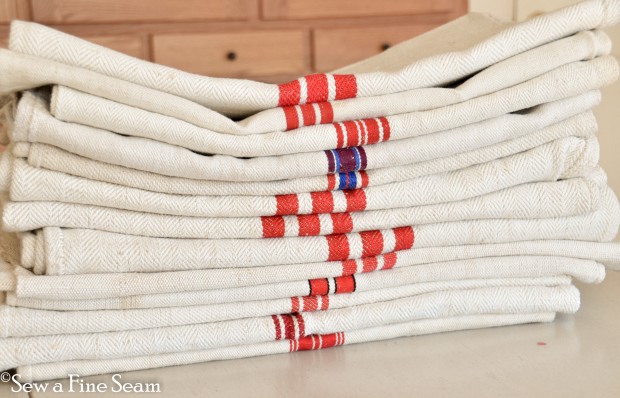 But let’s talk about these delicious Antique Grain Sacks now shall we?  I showed you a peek at them in my photos of our booth after the sale.  Would you like to hear the story of how I found them?  It’s a kind of fun one 😀 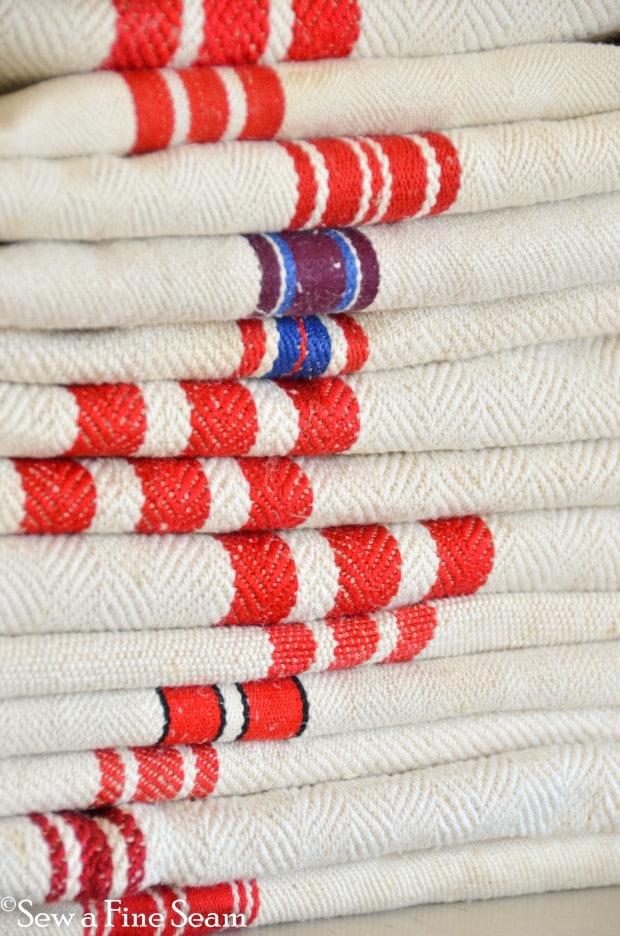 I was minding my booth on Sunday, making deals, selling stuff and hoping the big stuff would sell.  My Teenager and Middle Girl were with me and they were bugging me for some Fries and Fried Mushrooms.  So I got them some.  Middle Sister (Larke) really wanted the ‘shrooms.  But she decided she didn’t like them so I ended up with the whole order to eat myself.  As I was waiting on them to cool enough to eat them a lady parked her shopping cart outside our booth and came in to shop.  I said ‘hello’ and my eyes strayed to her cart sitting just outside. 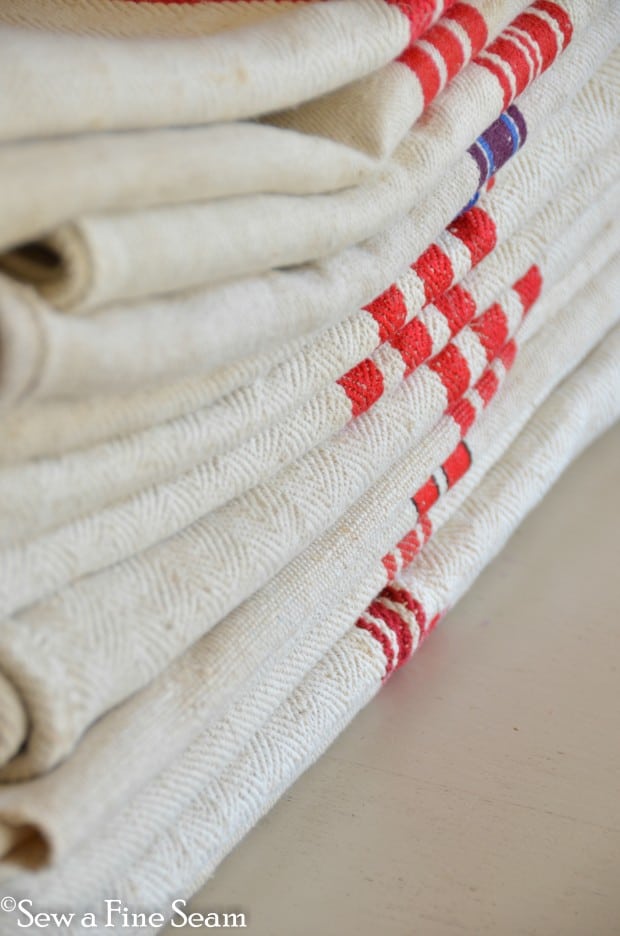 And my eyes about popped out of my head.  In her basket was a stack of Antique Grain Sacks.  I was beside them in a heartbeat, feeling them to see if they really were what I thought they were.  The poor lady probably thinks I am a lunatic – I practically shouted at her as I asked ‘WHERE DID YOU GET THESE AND ARE THERE ANY MORE?!!!!!!!!!!!! 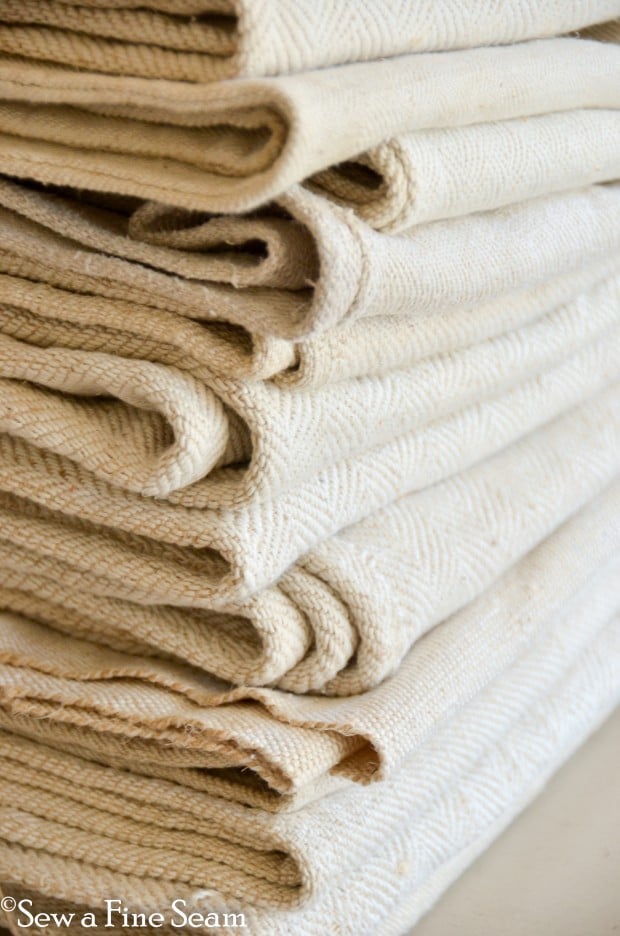 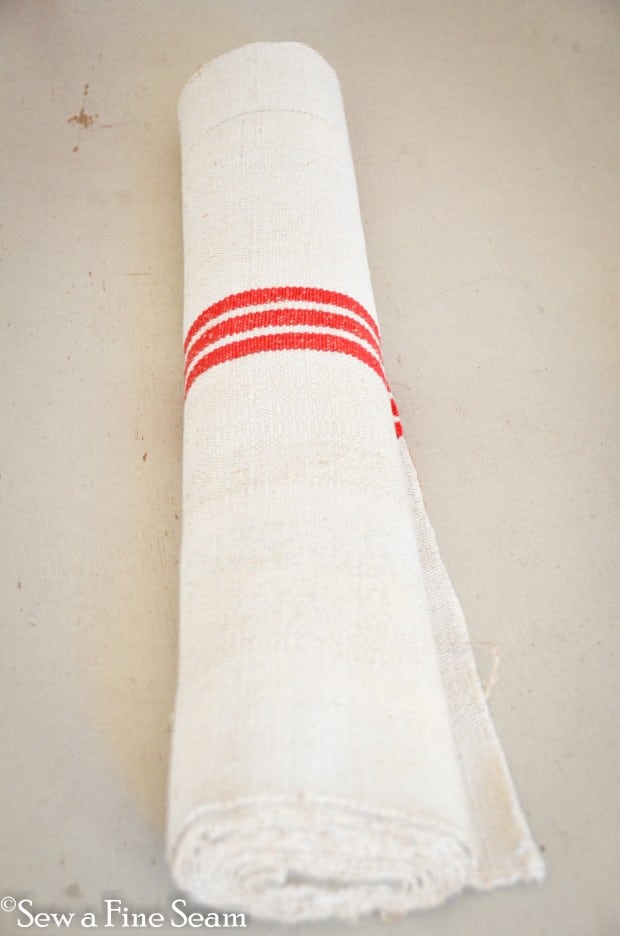 That sweet angel of a lady pointed us around a corner to the correct tent and then returned to her own shopping.  Emma and I made a beeline to the grain sacks.  I had grabbed the mushrooms as I left on our race to the goods (what possessed me to take them along I’m not sure – I wasn’t thinking straight.)  I shoved them into Emma’s hands and started digging through the grain sacks, mentally figuring how many I could buy with the cash I’d hurriedly stuffed in my pocket on my way out. 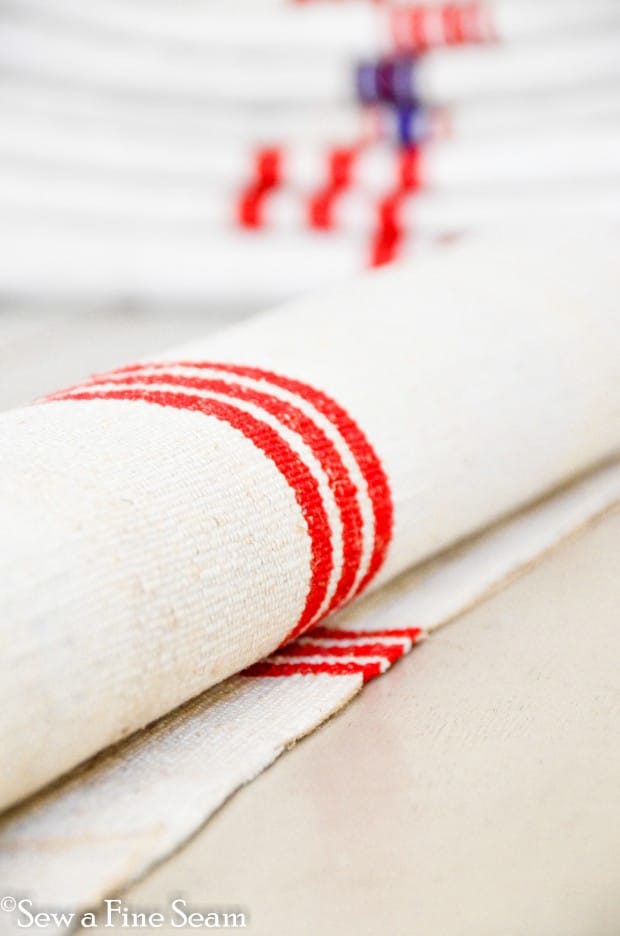 The booth was run by a couple older gentlemen who were in the process of packing up for the weekend.  I’m so glad I got to them before the grain sacks were put away.  I think they were rather happy to sell me my stack of 12 grain sacks too.  My total came to $4 less than an even number so when I handed the guy the cash I told him to keep the extra $4.  He’d given me a good deal anyway. 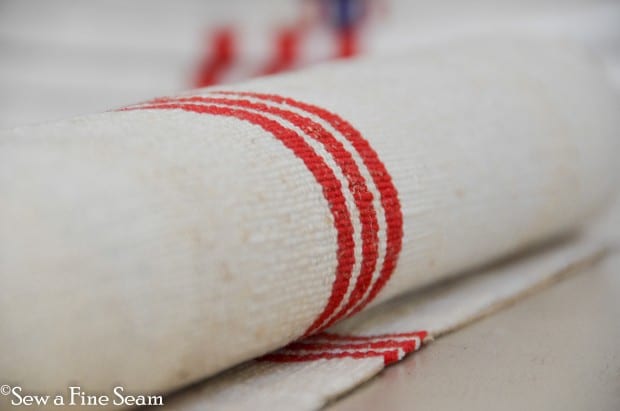 He didn’t want to take the extra but I insisted.  So he proceeded to give Emma 4 of the sweet little Christmas ornaments she had been admiring.  And then.  Then he told me to wait just a minute and said something about a grain sack runner and what they had done with them.  I thought he was going to pull out a piece of furniture they had used some grain sacking on to give it a makeover. 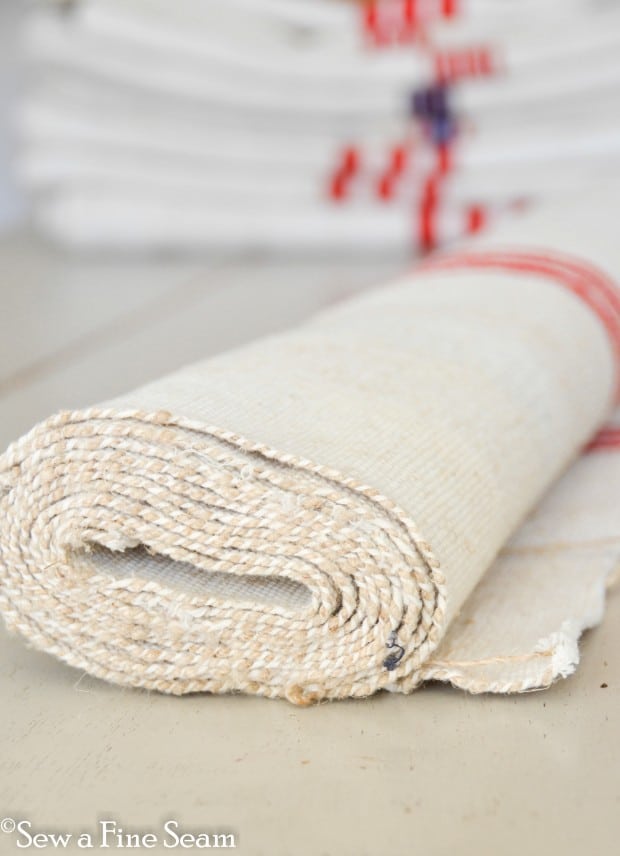 But no.  He pulled out a grain sack runner.  Finished on both sides but not made into a bag.  Better than grain sacks – almost!  And HE GAVE IT TO ME!  He’d also written down his contact info – I think he sensed he had a live one on his hands!  And you can bet I’m going to be calling this guy and just maybe I will be making a trip to his shop.  It’s not THAT far from me – his state borders mine! 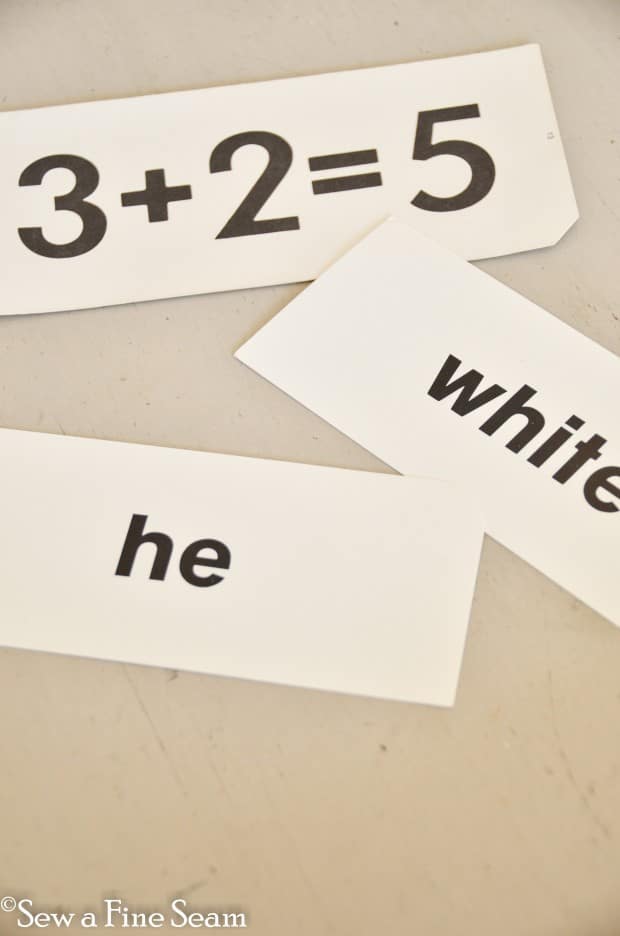 Whew.  Makes me tired all over again writing all that!  Emma held the mushrooms and I hurriedly ate them on our way back to our booth – me with my stack of grain sacks.  Halfway back I had to have Emma help me – grain sacks get heavy!  I think my friends who were in my booth when I got back thought I was nuts.  They just don’t quite ‘get’ my passion for grain sacks I guess 😀 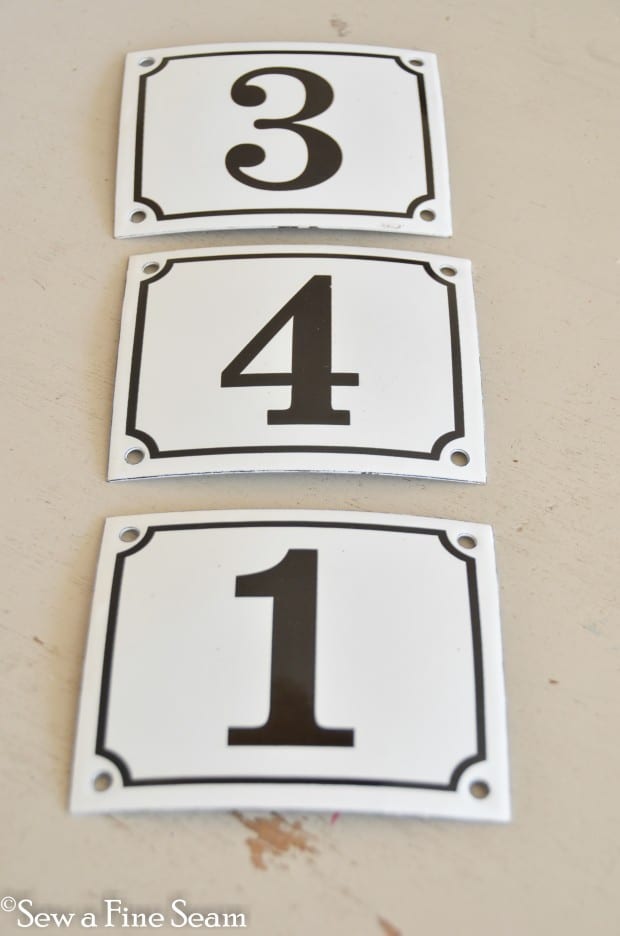 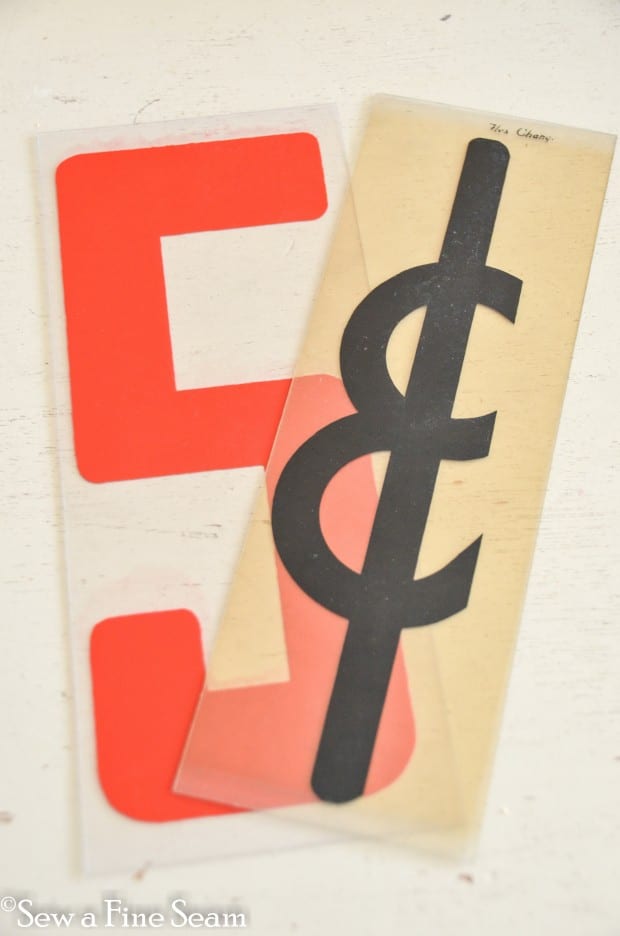 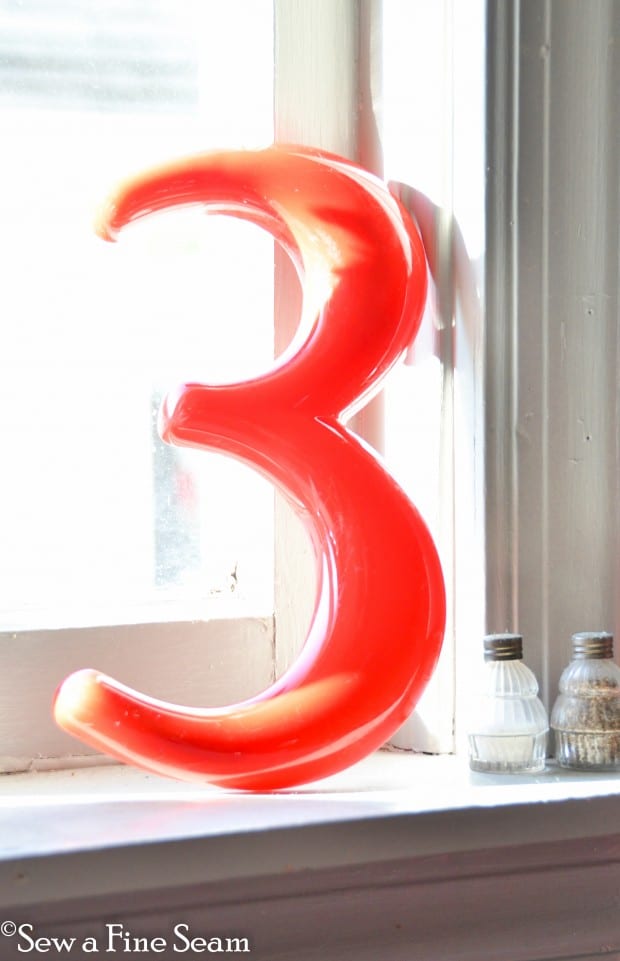 And a plastic number 3.  I love typography almost as much as grain sacks, though I won’t beg anyone to show me where they found their letters and numbers like I will with grain sacks!  The sweet lady shopped my booth later and bought my deconstructed chair (which my teenager insisted on calling DEstructed and my hubby laughed and agreed) and a couple of shutters.  You better believe I gave her a GREAT deal!  And she wrote me a check so I have her name and phone number.  I plan to call her and if she does re-upholstery for other people she’s getting some business from me!

Ok, that’s it for now.  I know the blog went silent for a while last week.  I’ll do my best to get back into my regular posting routine now!  Have a great week!

Sign up for all the Strawberries and Cream from Sew a Fine Seam! (discounts, news, product launches, info and more!)
« Before and After
A Bit of Autumn Decor »