*this is a sponsored post about Royal Design Studio stencils.  All opinions and thoughts are my own. 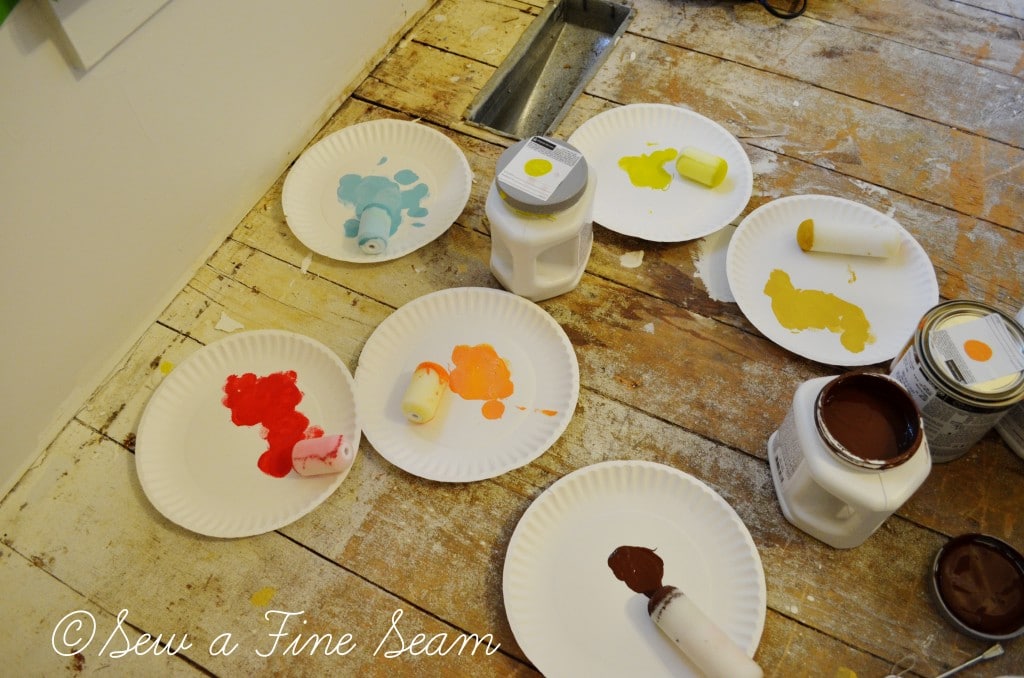 I mentioned awhile ago that I would be doing some Stenciled Wall Art.  And I showed you this photo as a sneak peek of the colors of paint, all poured out on paper plates with sponge rollers in the paint, obviously in the midst of the project.  Today I’m going to finally show you the finished walls.  The floor is still a work in progress so a full room reveal with be coming at a later date.  My stencil was chosen from Royal Design Studio after they offered to send me a free stencil to do a project with.  I picked 2 stencils and told them I would take either one – they sent me both!  Gotta love generosity like that!  You can see the stencil project I did with the other stencil here. 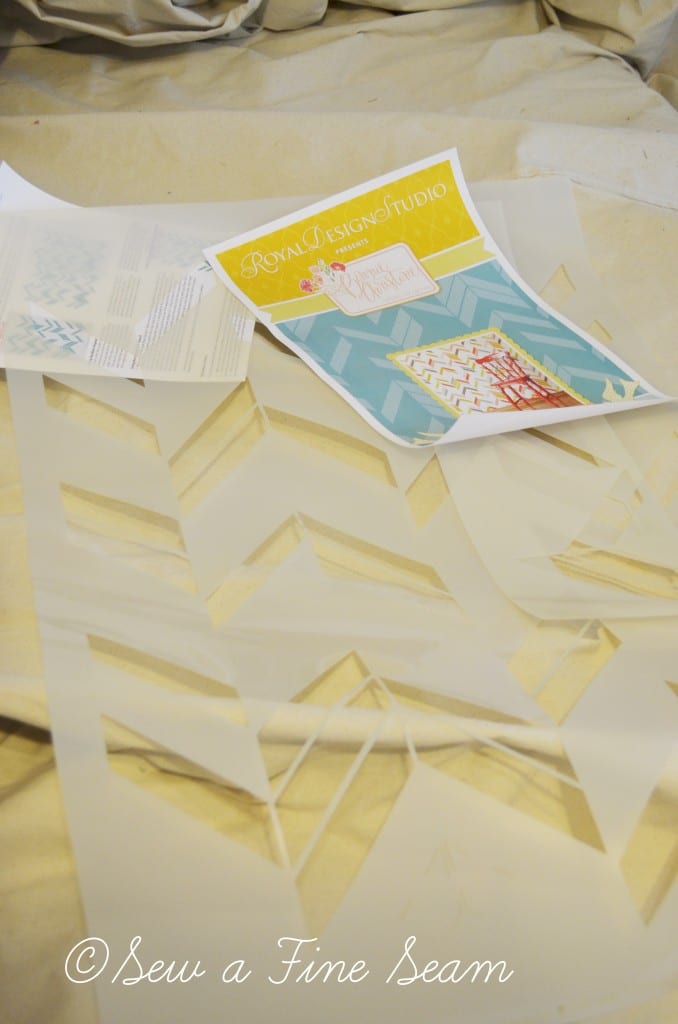 This stencil is called Herringbone Shuffle.  And I must insert here that I love the quality of Royal Design Studio’s stencils.  They are thick enough to be durable and not break easily where there are tiny pieces between designs, but lightweight enough to be flexible when working at room corners. 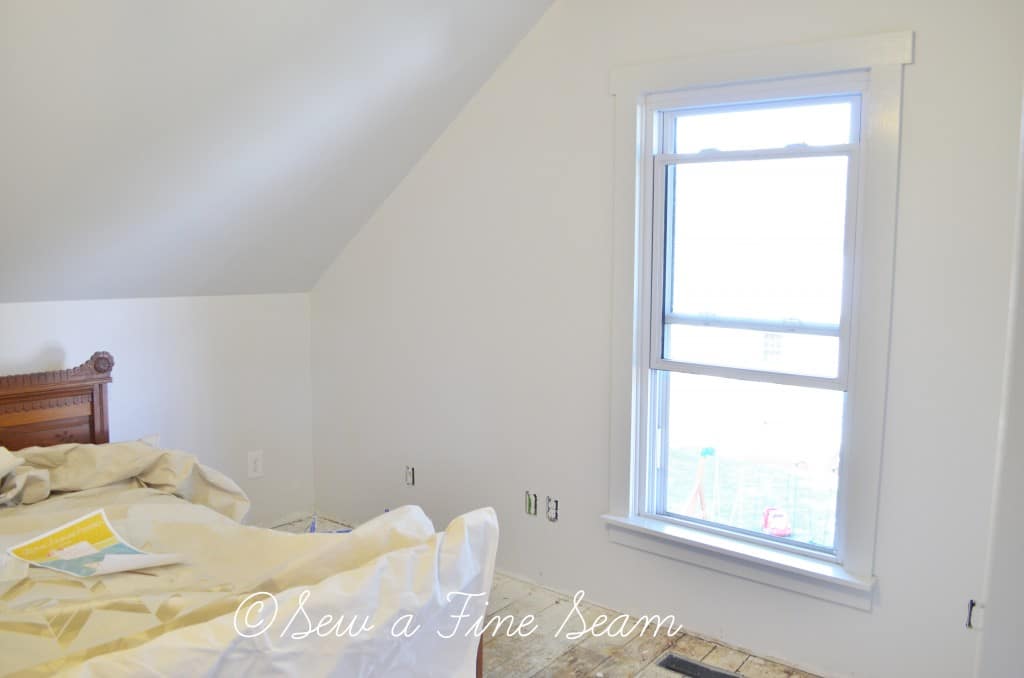 This is the wall I was working with – the one with the window.  The original plan was to cover that whole wall with the stencil pattern. 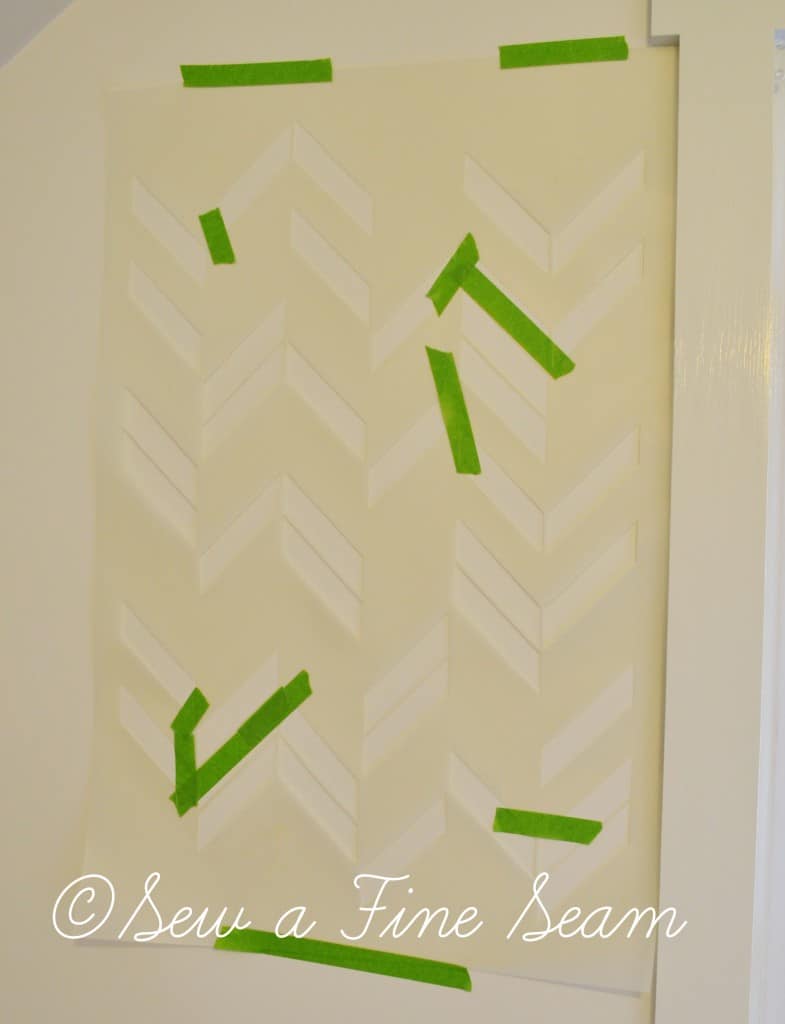 Since the wall I was working on made it impossible to start at the ceiling, I started my first stencil against the window trim and kept the top of the stencil even with the bottom of the top trim piece.  It’s just where I decided to start.  No rhyme or reason to it other than that it seemed the easiest way to start straight.  I hung the stencil on the wall with Frog Tape and used some frog tape to create a barrier on the skinny parts of the stencil where it would be easier to get paint across into another space that was supposed to be a different color. 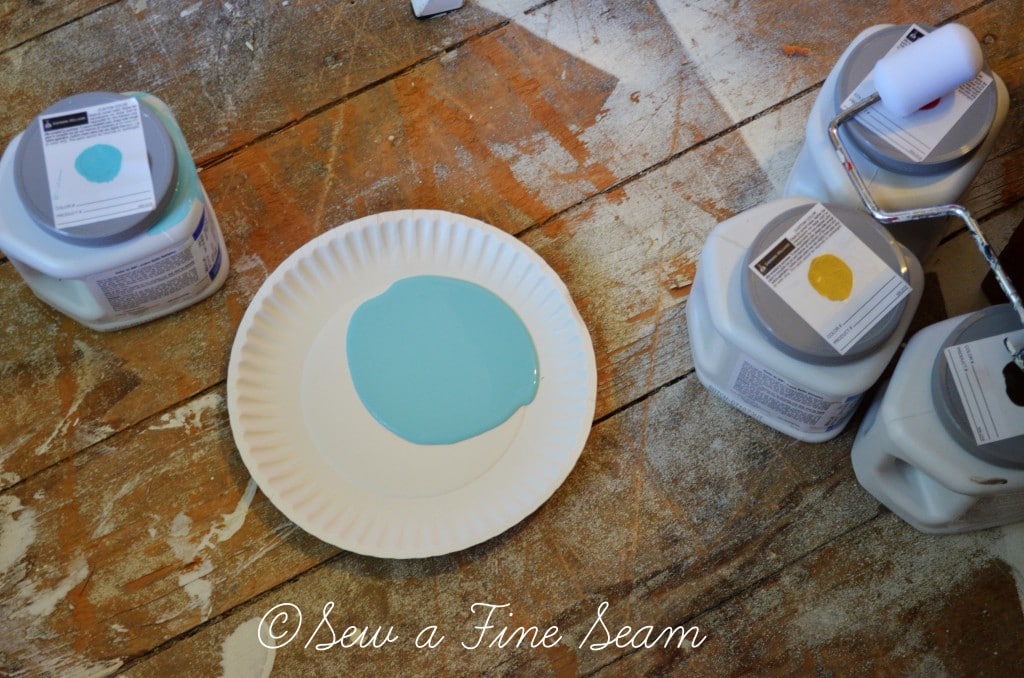 I used paper plates for my paint, and to start with I thought I would roll the paint onto each space.  I soon realized that wasn’t going to work so well for me.  So I ditched the roller tool and just used the foam rollers as my ‘pouncer’ to get the paint where I wanted it.  Worked like a charm 😀 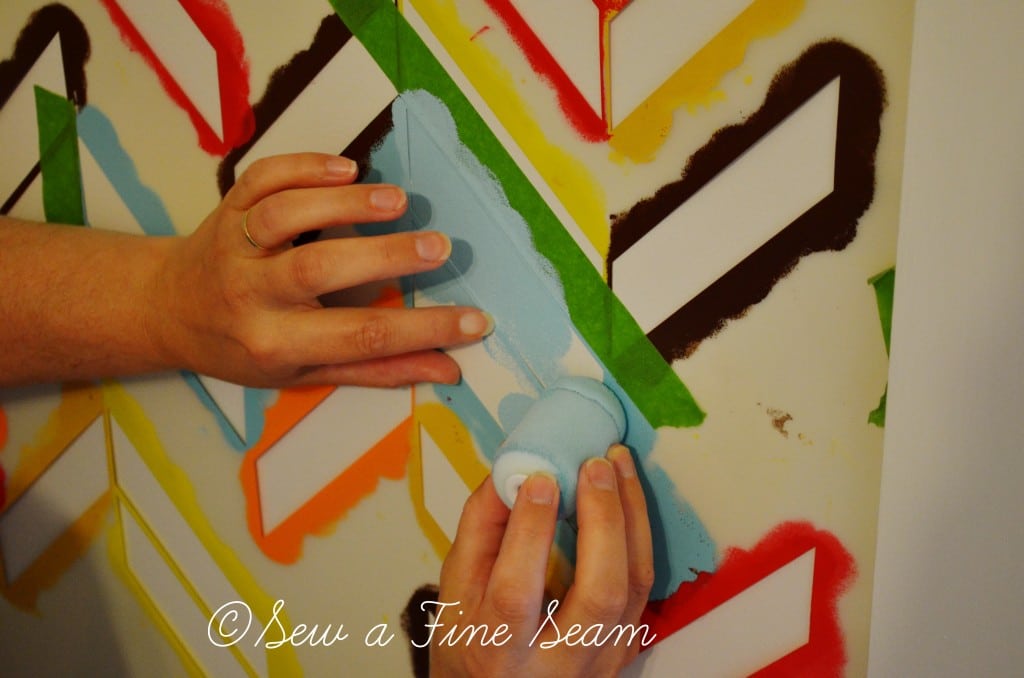 Here I am painting 2 spaces side by side blue.  You can see how I have the frog tape above the top blue space because there was just a tiny strip of stencil between the blue and yellow.  I didn’t use tape below because there was a larger space of stencil. 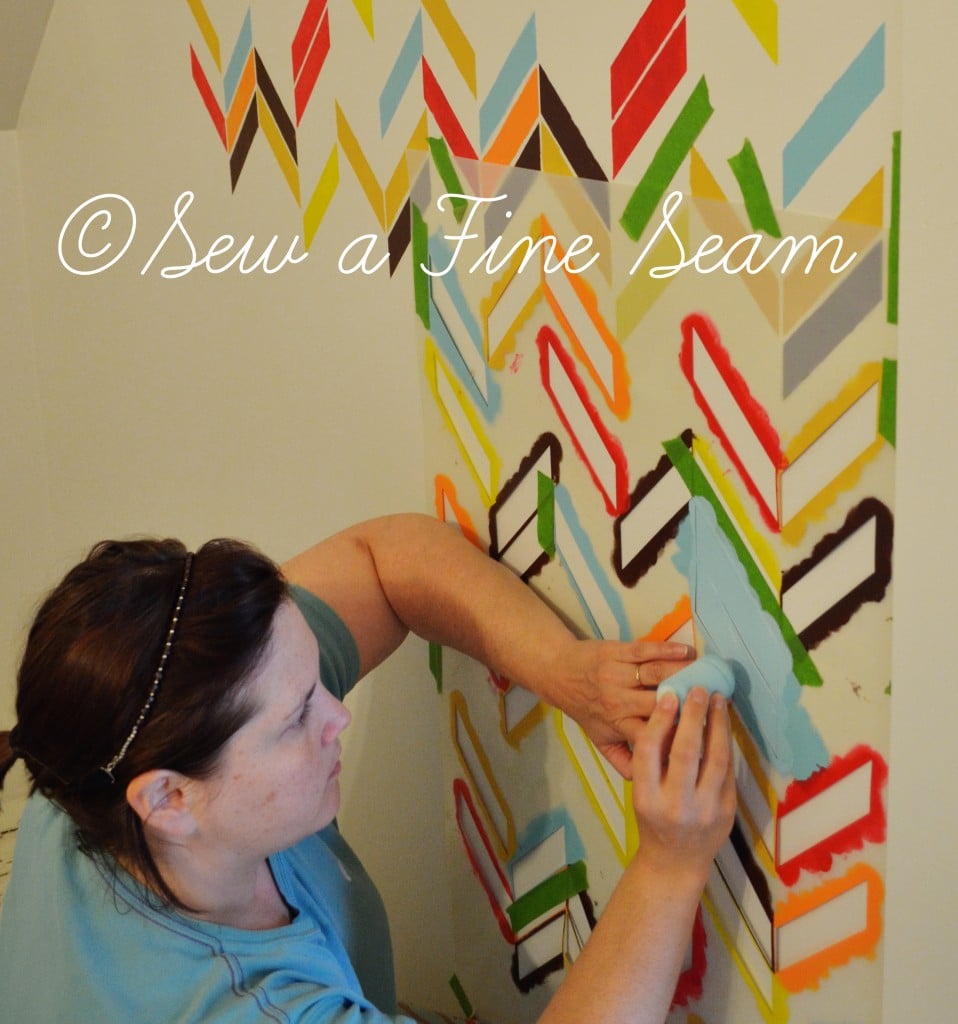 And since my daughter took some pics of me doing the painting I guess I’ll share one.  😀 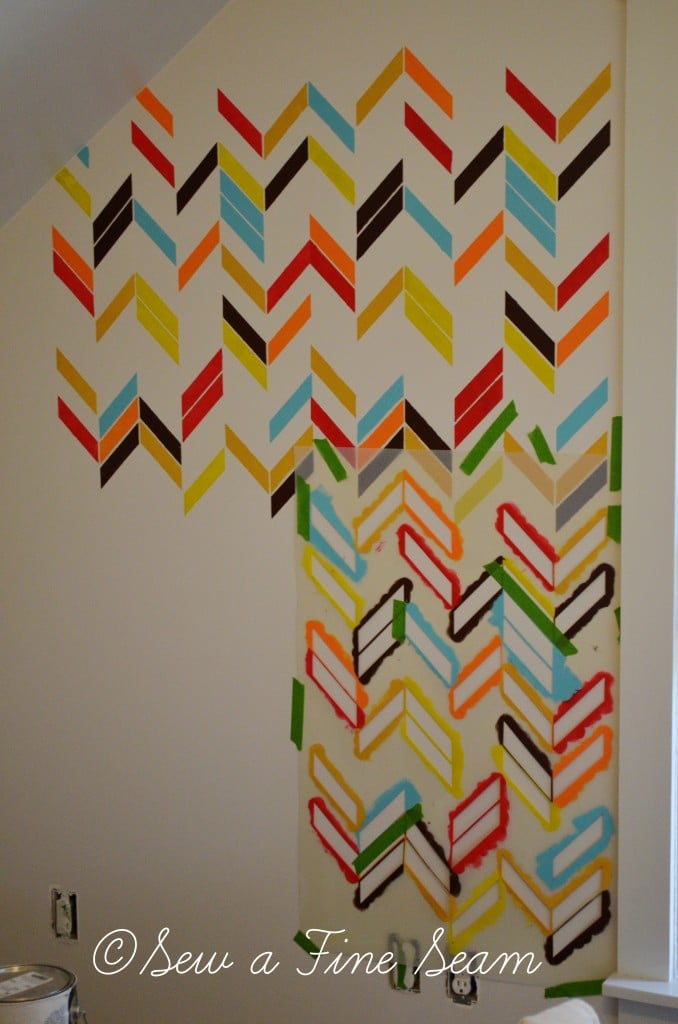 There are small dashes cut through the stencil in a ‘v’ shape that you line up with what you have already painted to get your next set lined up properly.  It’s designed very well and is easy to use.  Somehow in spite of the ease of use I managed to get my second one, to the left of the first, a bit off – see the 2 red herringbone shapes that come together in the middle?  I fixed it later by free-handing a strip of white down the center.  If you look closely at the wall, and know it is there you can see it but from across the room you would never pick it out.  See later photos for proof! 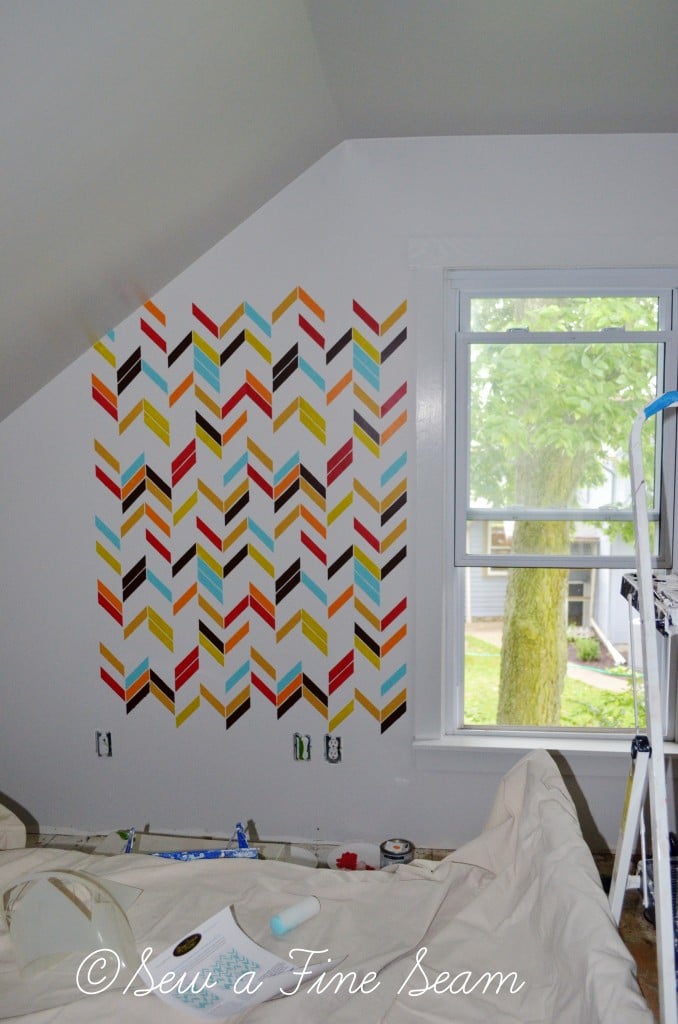 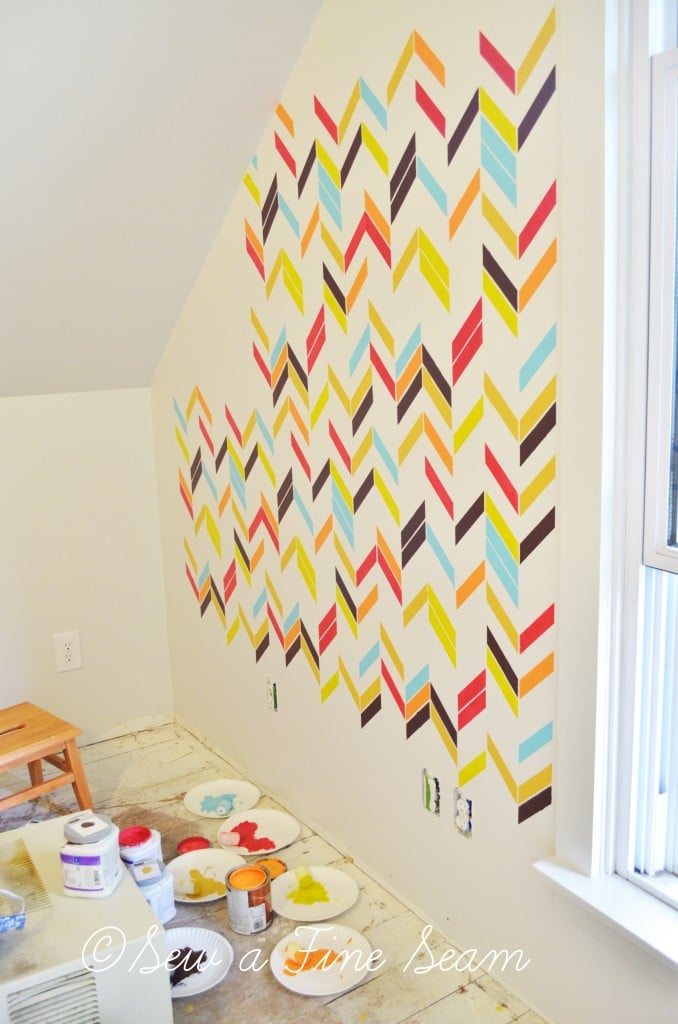 Now the easy part is done and the hard part starts. 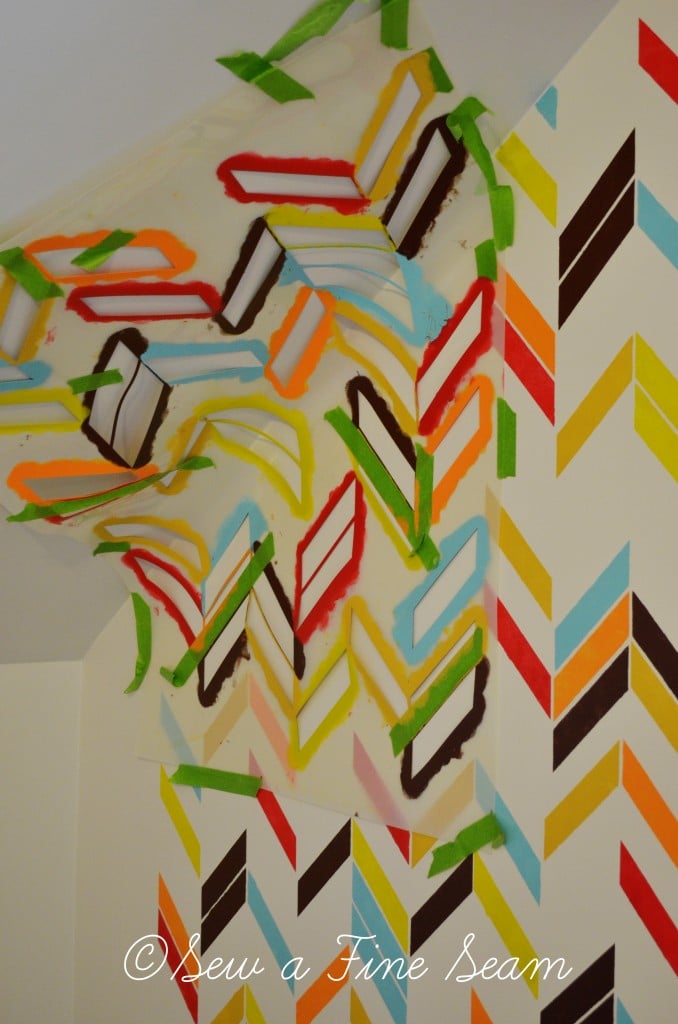 I mentioned that the stencil is flexible so the lower part of this section wasn’t too difficult.  The most challenging was where the slant wall of the ceiling met the wall I was painting.  (I would pick the wall that doesn’t have straight, square sides!) 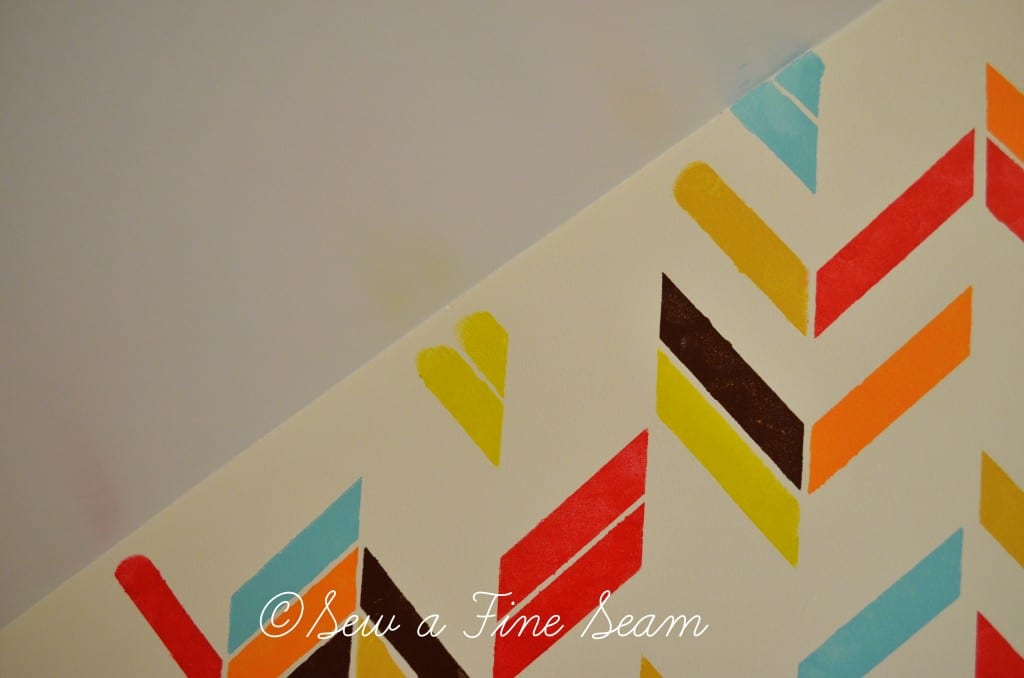 I did as much of those spaces as I could with the stencil on the wall and then I finished them with an artist brush and just free-handed it in. 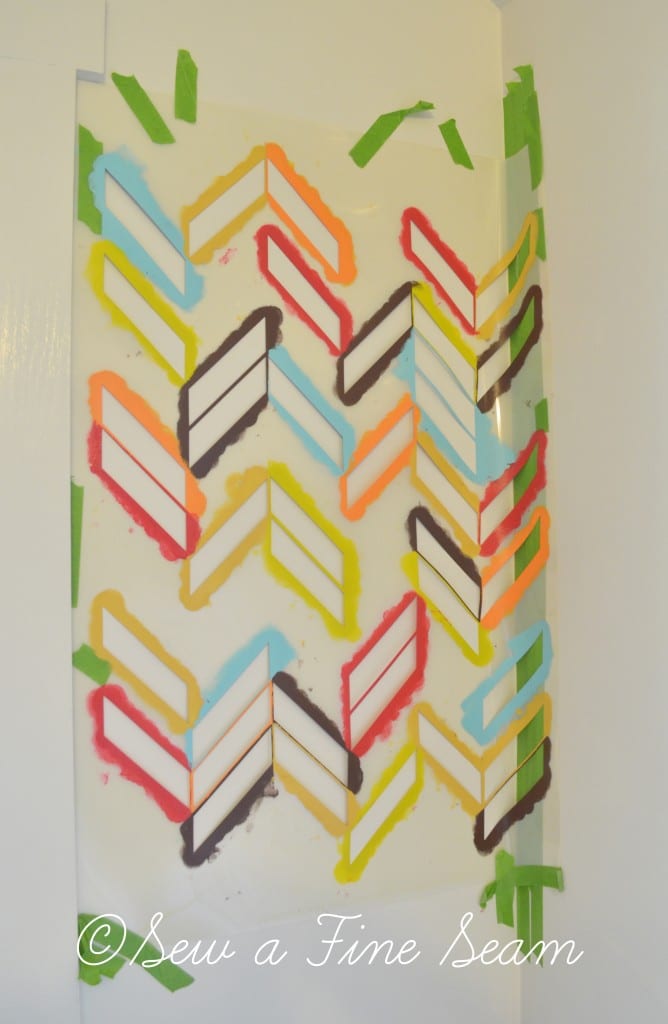 The space on the other side of the window wouldn’t hold a complete stencil width so I used the same technique to finish the spaces along the corner.  I also frog taped the adjacent wall to keep the paint from getting on that wall as I tried to get as much paint on the wall with the stencil as I could. 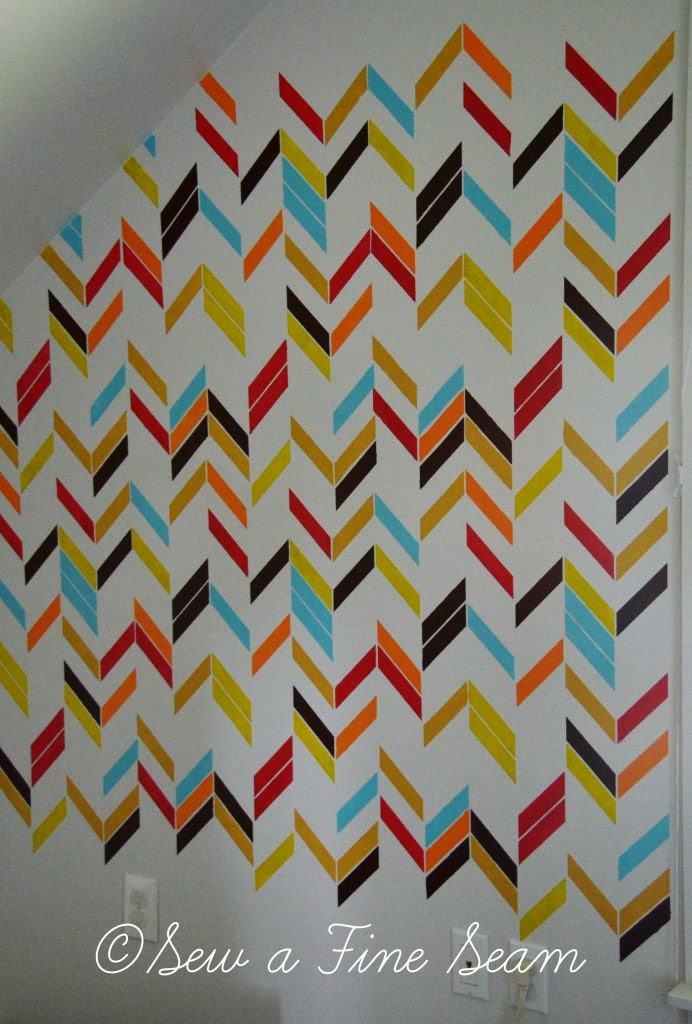 Once I got to this point I decided it looked just fine, if not better, as just a wide stripe across the wall instead of going all the way to the ceiling and floor.  Travis suggested it first, and getting that stencil jockeyed into position around that window was going to be a real challenge.  I decided it wasn’t worth the time and effort so stopped here. 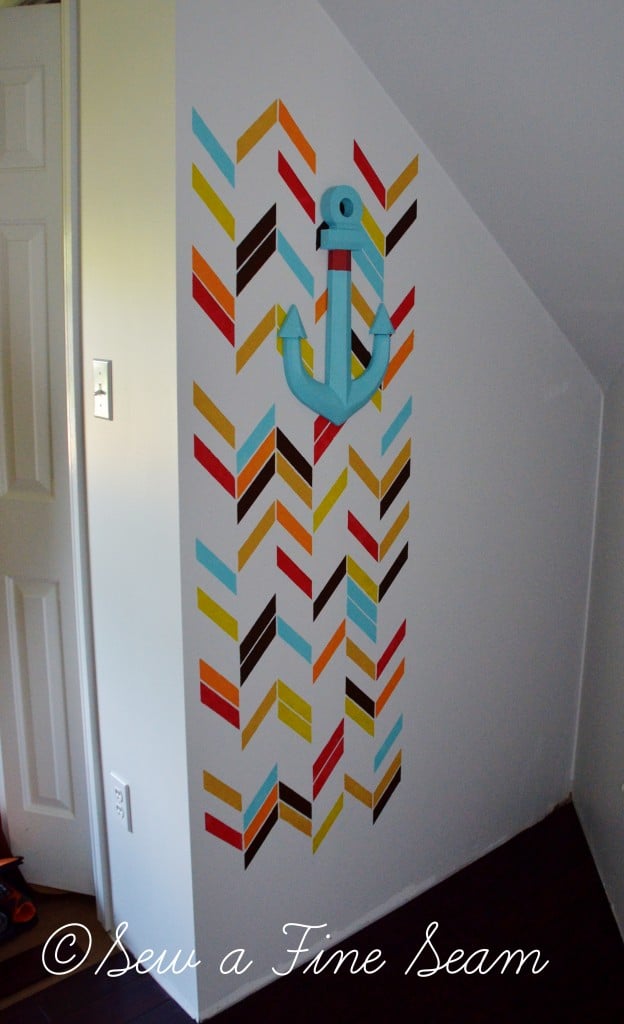 I also had planned to do this little wall that makes the closet in their room.  Once I had 2 stencil lengths painted I thought it looked just fine as it was – once again getting that stencil back in that skinny corner was going to be challenging.  Had I thought it would look way better to go with my original plan, and worth the effort I would have found a way to do it.  But honestly, I like it better this way.  The anchor got a paint job with leftover paint from the walls, and it’s hung already because there was already a screw in the wall and there was a wall hanger on the anchor.  Had nothing to do with the fact that I just might be itching to get to the decorating part of this room makeover! 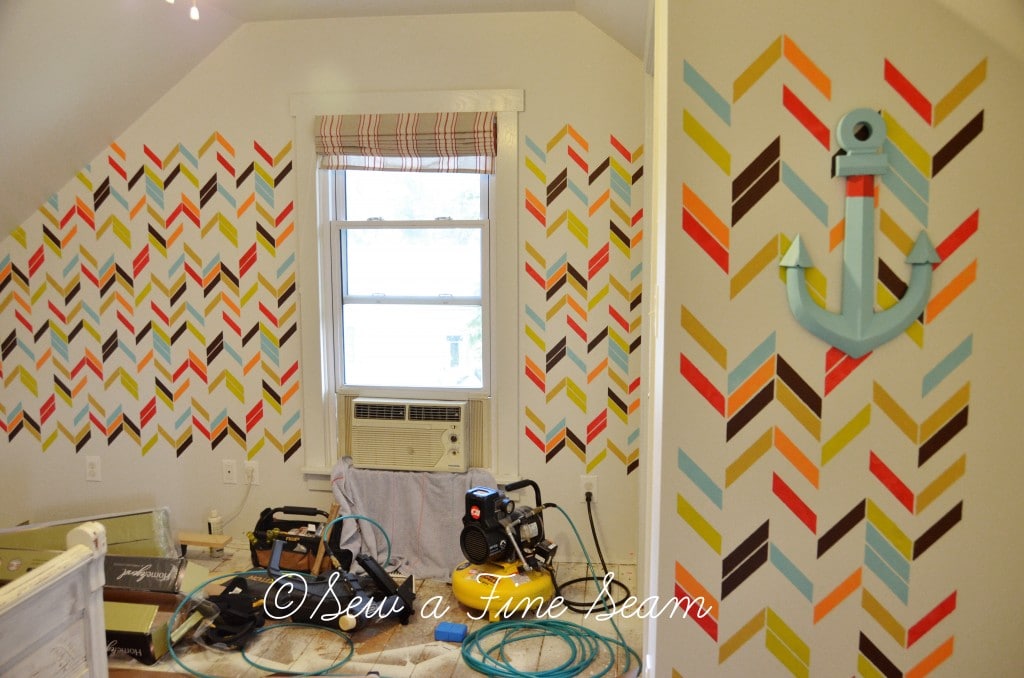 And here is the whole stencil shot.  This is what the room currently looks like – I shot that photo yesterday morning before church.  Hardwood is about half installed.  Just not enough hours in the day to get everything done.  Before winter sets in hopefully 😀

Thanks for putting up with the wait to see the stenciled walls.  I’m so thankful that part of this project is finished!  It took me quite a few hours to do this – at least 8.  It wasn’t as easy as I thought it would be – or I should say, I never really thought about how hard it might be.  But would I do another wall stencil?  In a heartbeat!  If it were one I loved – it’s just a really cool wall treatment.  Travis likes it much better than wallpaper because it’s part of the actual wall.  It’s art.  The girls love it because they picked the colors and it’s just what they wanted.  I love it because it’s another project successfully accomplished.  It wasn’t perfect, I touched up a lot of spots with white paint after the colors dried.  But I’m very happy with the finished project.  I’d recommend wall stenciling to anyone who likes painting and wants a fun, personalized detail.  And I’d point them to Royal Design Studios for a place to purchase their stencils.  They also carry stencil brushes and creams and rollers that I have not tried.  I’m thinking when my next project that involves stencils comes along I might have to give some of those a try.

What do you think?  Would you attempt a wall stencil?

*I was given the stencil in exchange for blogging about it.  All opinions and thoughts are 100% mine.

Sign up for all the Strawberries and Cream from Sew a Fine Seam! (discounts, news, product launches, info and more!)
Be the first to know about new tapestry wall hangings, boho throw pillows, seasonal home decor and more.
« Bloom Where You Are Planted
Birthday Party Planning »