In my post last week about redecorating my 12 foot shelf I mentioned that I had some more decor to share with you – involving old springs and light bulbs. 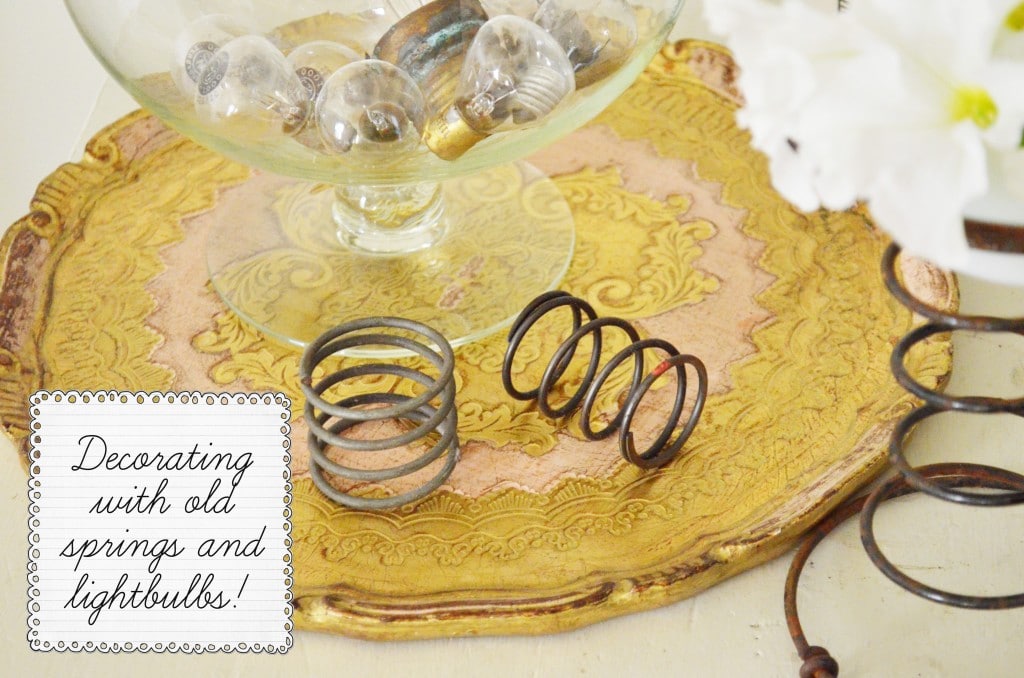 Do you like to use unusual objects in your decor? I think it’s fun, especially when those objects are on the industrial side. I’m really drawn to the look Restoration Hardware has going. I can’t afford RH but I’ve been tossing around some ideas to create knock-offs. So far I haven’t worked much industrial into my home. Somehow anything I’ve tried ends up looking too rustic/country, which is fine if that is the look you are going for. Since I’m not going for rustic/country, I don’t keep the stuff around. I think I might be using the wrong stuff – I’ll keep at it till I like it 🙂 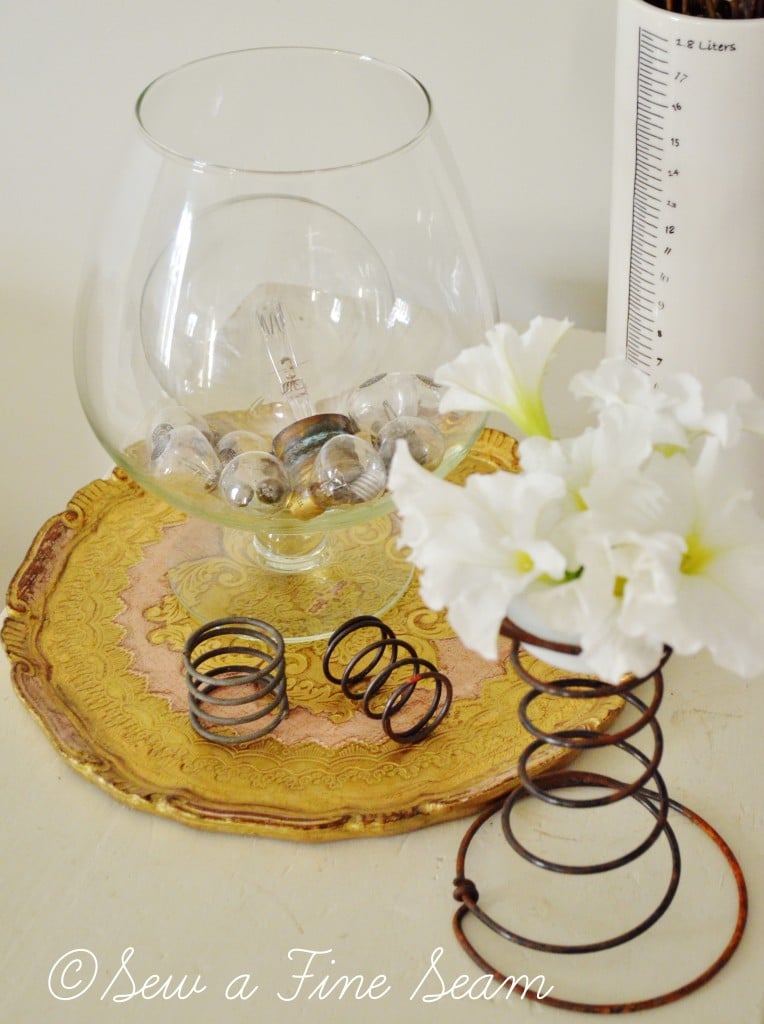 I used to have a huge light bulb that I bought at a cute little shop. It was a real light bulb but it was being sold as a decor object. For some reason it struck me and I bought it. You can see it in my Christmas dining table decor from a few years ago here. 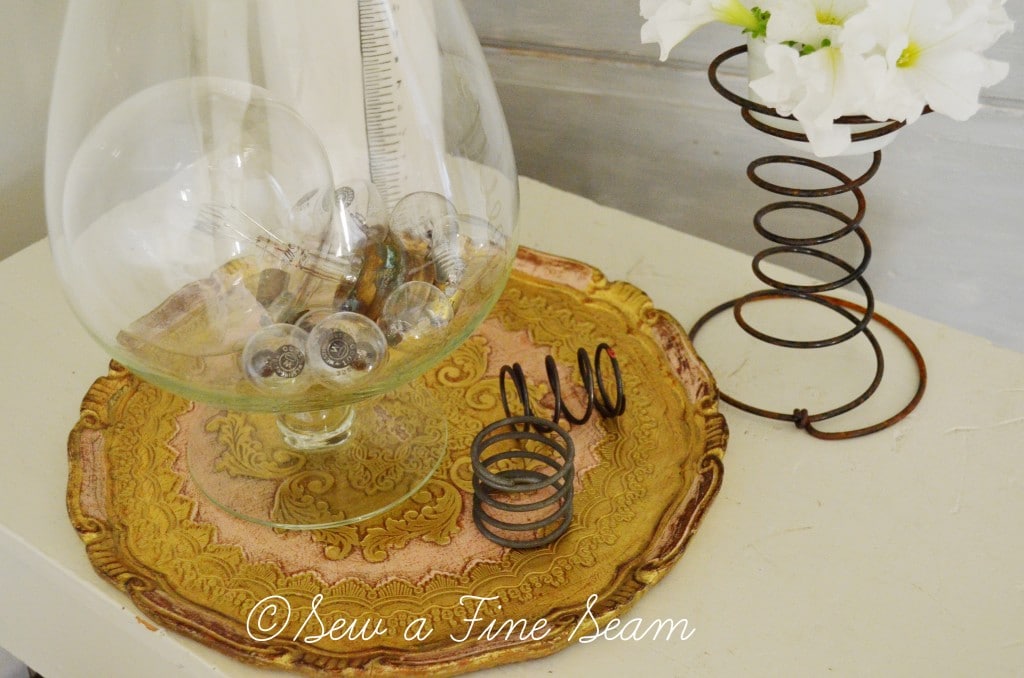 That light bulb got broke a few months ago. I don’t remember for sure what they said happened, but somehow the compote it was placed in got knocked off the shelf it was sitting on, and they both broke to smithereens. I wasn’t home at the time and my girls were a bit fearful of my reaction because they knew I really liked my light bulb. I was just glad no one had been hurt by raining glass. Light bulbs can be replaced. Eyes, and fingers can’t. 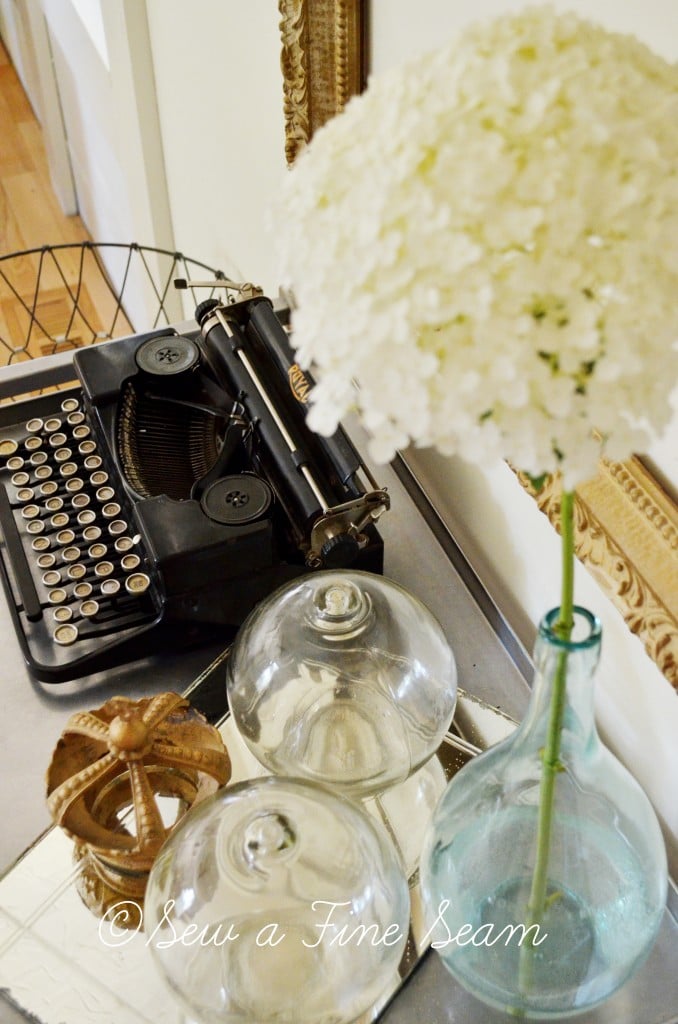 At the family auction when my Mom and her siblings sold my Grandma’s things we also went through my Grandpa’s shop. Grandpa died about 10 years before Grandma and his shop was still sitting full of old, cool industrial stuff. I was the only female in there ‘shopping’ and excited about stuff. Everyone else thought I was bonkers. But I know some of you will ‘get’ it! 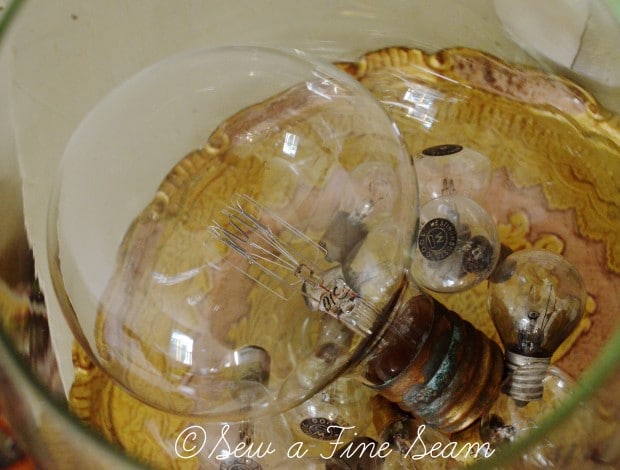 I found a light bulb sitting on a shelf – I think it was a replacement for one that was on some machine Grandpa had. I paid 25 cents for it. Great replacement for the one I lost. And quite a bit cheaper too – I think the original one I had cost me $10. Then I found some cute little light bulbs and snapped them up too. 25 cents for the lot of them 🙂 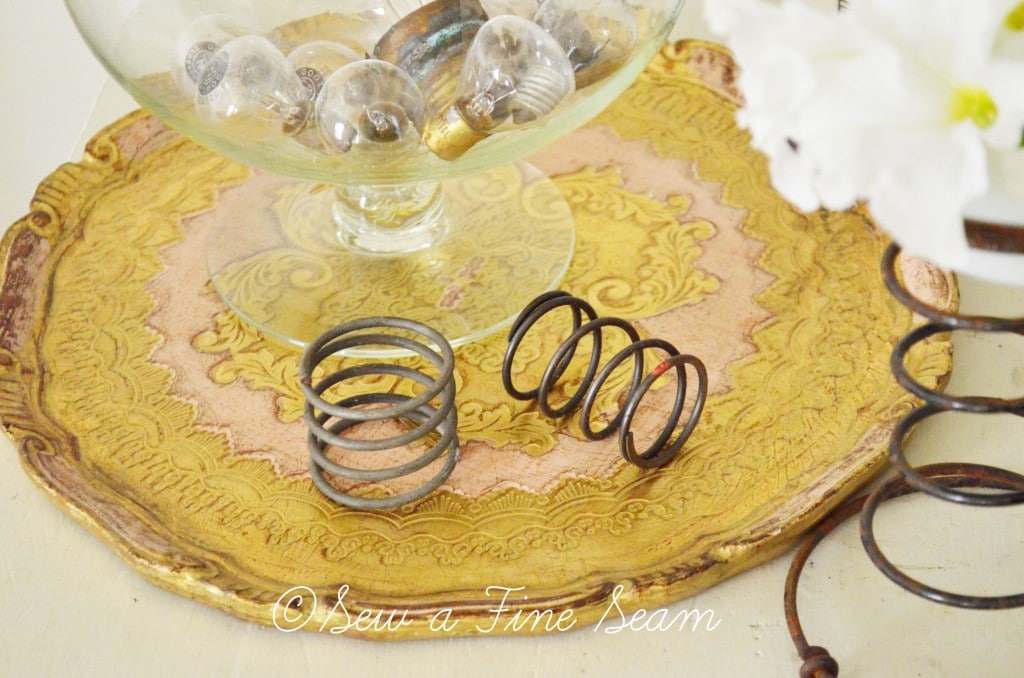 And the springs. Have you seen the cool things people are doing with old springs? Type springs into the search on Pinterest and see what you find! They are metal, round, springy, and just cool 😀 Outside the back of Grandpa’s shop was a pile of junk. Just a mess of old junky stuff. But in that pile was a ton of old bed springs. I had found gold! My cousin, who was being our auctioneer, told us if there was anything we wanted to pull it out and he would sell it. I immediately said I wanted the springs. He said, “I’ve got 25 cents on the springs, does anyone else want them?” He waited about half a beat and said, “Sold.” My grin about split my face. 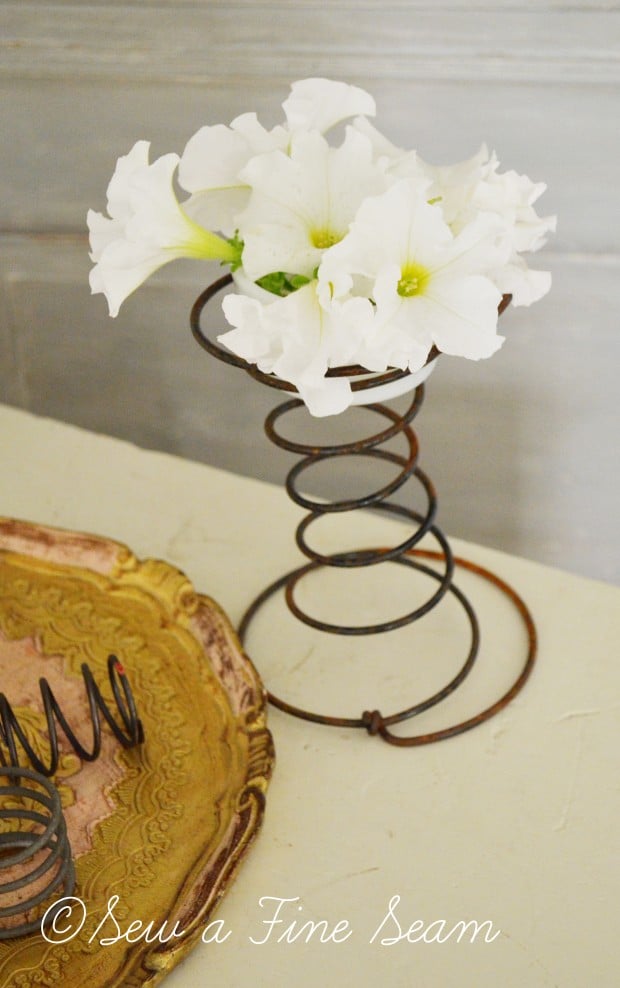 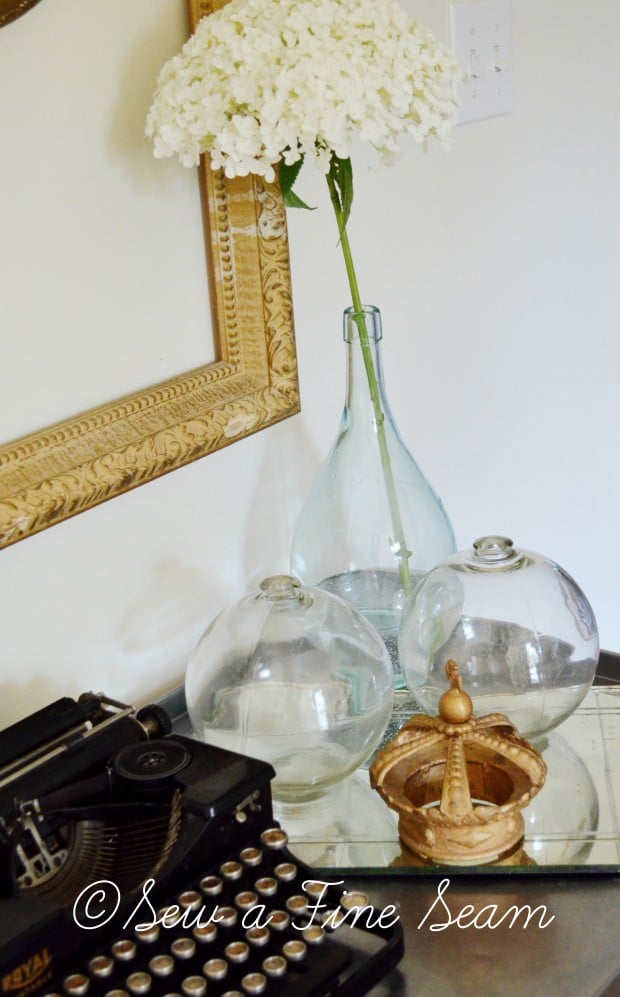 And would you like to know something else? Springs are rather a hot item – just as I suspected. I took a basket full of them to the Springfield Flea with me in May. I sold them for $3 each and sold every single one I took. And had people coming back to ask if I had more. 🙂 I think my Grandpa would be quite pleased that I wanted his old ‘junk’. I can just hear him laughing if I told him about people buying the old springs. I would love to know why he had them – did he have a project in mind for them? Or did they just end up there in a pile of other stuff he got? He was always tinkering with something, making something, and he loved antiques and cool old ‘junk’. I think he would ‘get it’.! 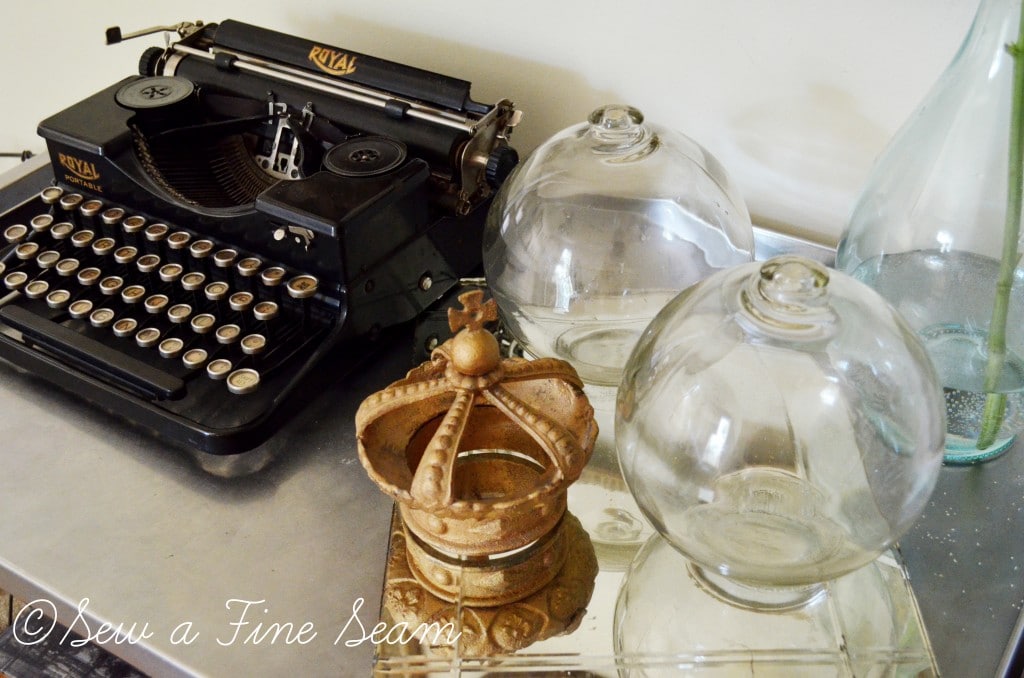 Have a great week!

Get my posts in your inbox – sign up here!

Sign up for all the Strawberries and Cream from Sew a Fine Seam! (discounts, news, product launches, info and more!)
« Inspiration Gallery Features
Hometalk – Stylish Slipcovers »