My husband and I have a problem.  He would say I cause it.  I say he does 😀  You see, we never seem to manage to finish one project before moving on to the next.  Always a new project in the wings. 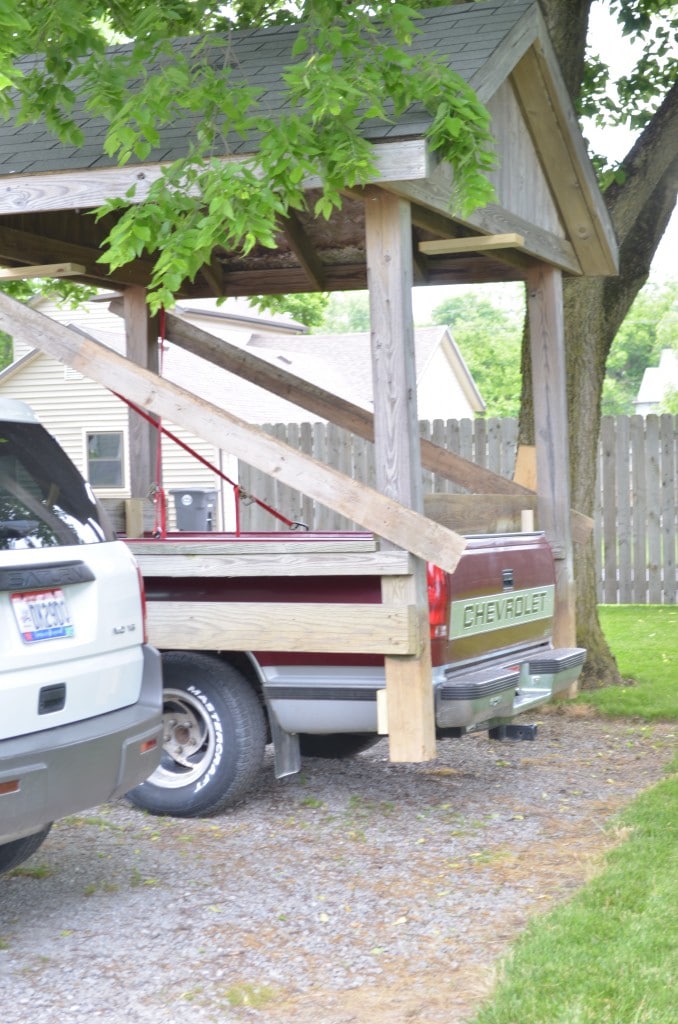 My husband says it’s my fault because I always start a new project or want him to work on something different.  I say it’s HIS fault cause he doesn’t just get at it already and get done with the project at hand! 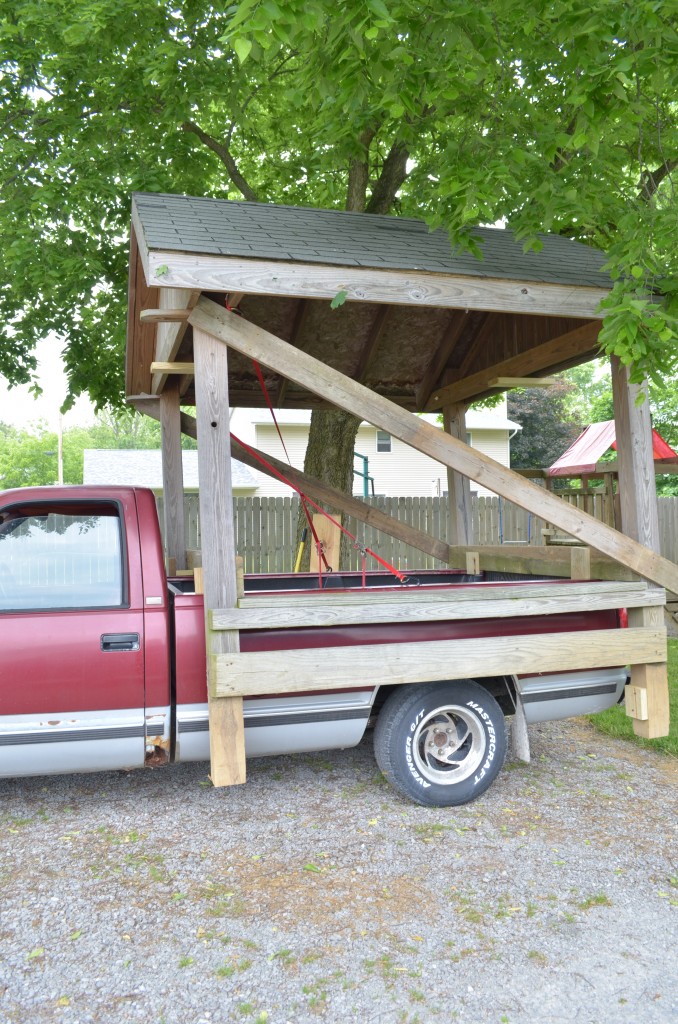 I would venture to say that we both contribute to the problem.  And I’ve wished time and time again that I could just do it all myself.  But I’m a wimp and can’t handle big tools (mainly because hubby won’t let me try) and I can’t move and lift like I did 15 years ago (I can blame that on him too – he won’t let me do the hard work – I’ve got a lot to complain about huh??!!  Love that man – he spoils me!) 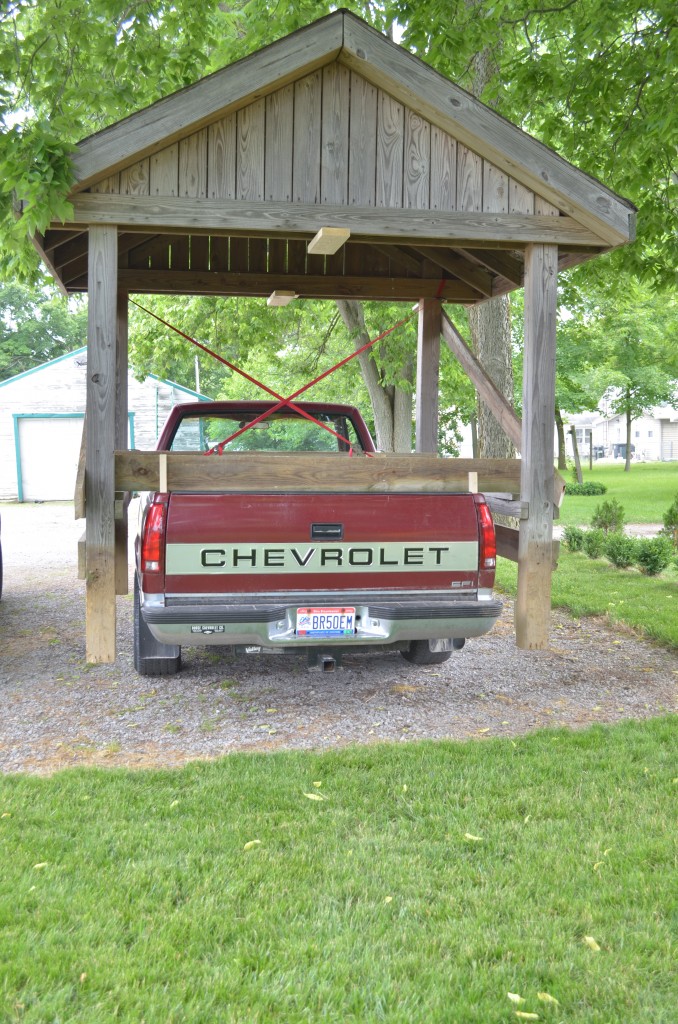 This summer is no different – we have started another new project before we finish the numerous projects that are already started.  Travis says we will tackle the rest of this one next summer.  Anyone want to put any bets on how long this roof and four posts stands her before it actually becomes a garden shed? 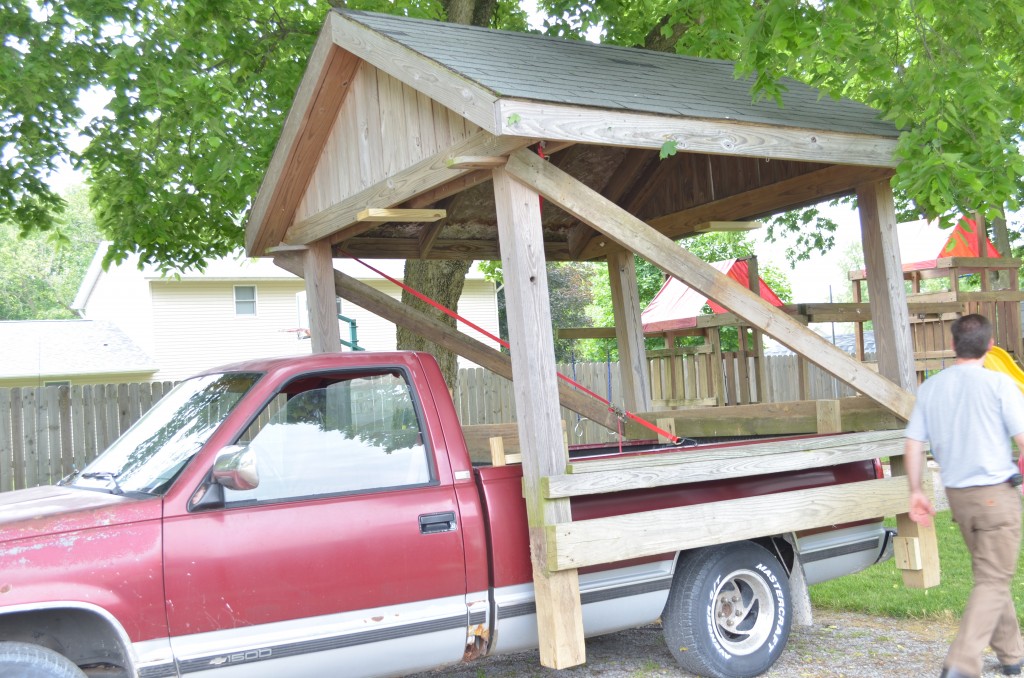 But dream with me a bit.  Squint and cock your head just so.  Can you see it?  Metal siding.  Cute old double doors hung on a barn rail so the will slide open.  Perhaps a cool old metal sign attached to the gable.  Boxwoods, hydrangeas, peonies, the concrete flamingos, lavender, a brick approach, an awning lean-to on one side…  It has the potential to be just adorable.  If we can finish it before we start on something else, like siding for the house or some other such necessary thing. 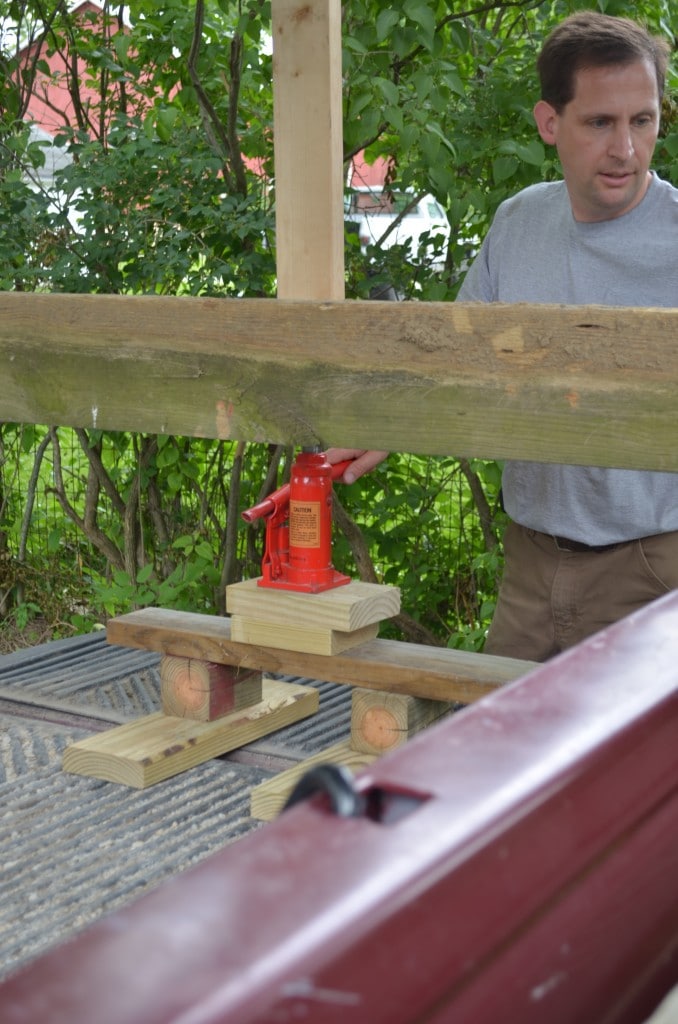 This roof and four posts began its life as a protective cover for my Dad’s large fire pit for grilling.  Dad then moved it out into the yard and put a sandbox under it.  Now that the grandkids are pretty much past the sandbox stage Dad decided it was time for the roof and four posts to go. 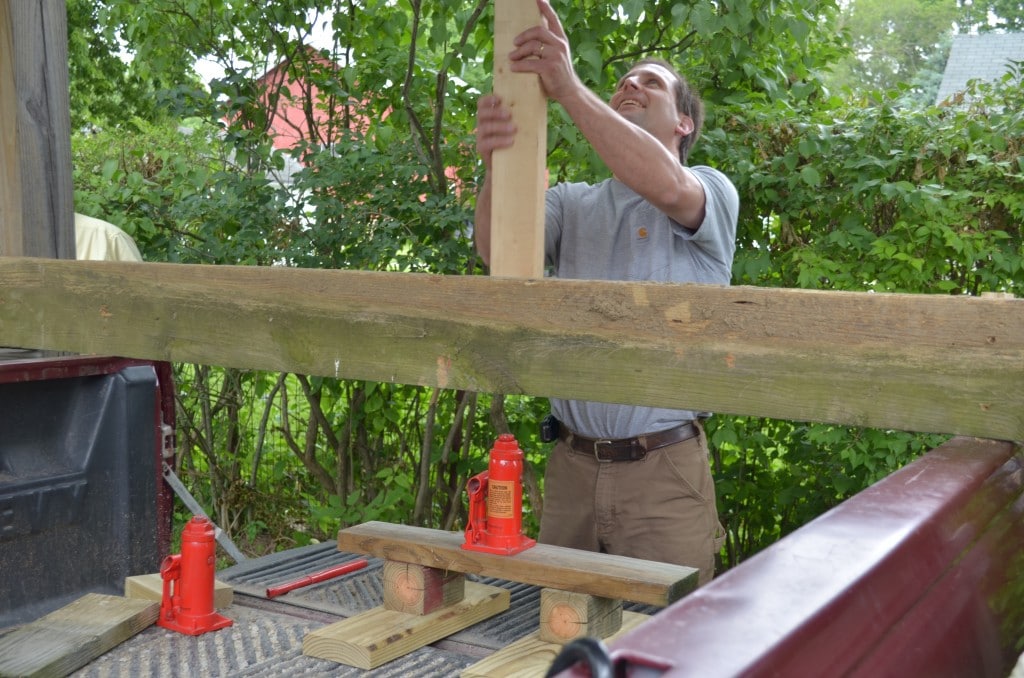 He mentioned it to Travis and somehow between the two of them they decided that it would make a good garden shed if it could be moved to our house.  The whole thing is made of treated wood so why take it apart and just burn it up? 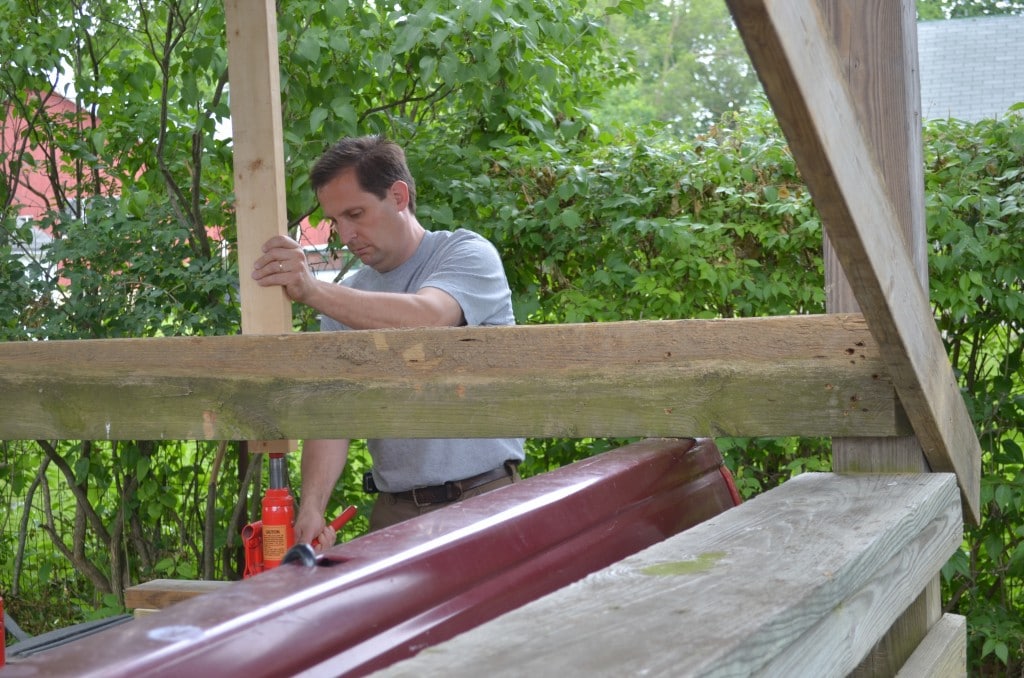 Sounded good to me!  I can use all the storage space I can get!  I think Travis was a bit afraid I wasn’t going to go for it by the look on his face when he told me about the idea.  But hey, I’m getting good at squinting and seeing the potential of cuteness and usability of stuff.  I was all over this one in a heartbeat! 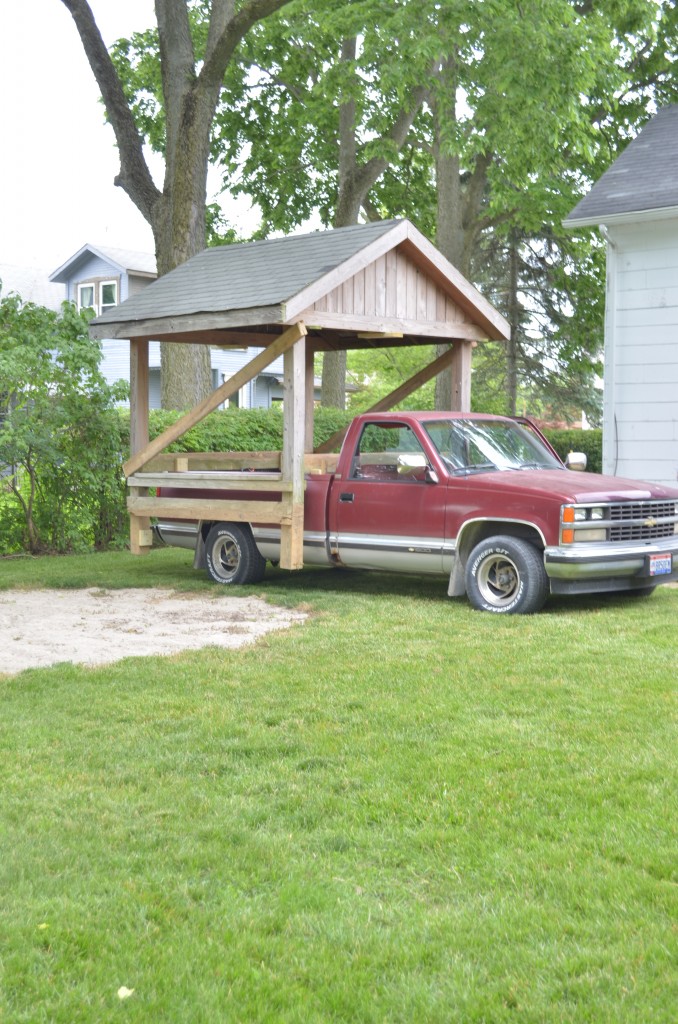 Together my Dad and my Husband figured out a way to get the roof and four posts from my Dad and Mom’s house to our house on the back of Travis’ pick-up.  I stayed home.  I am just a bit uptight when it comes to hauling stuff in the back of the pick-up.  After watching from the cab as my husband hustled to pick up his lost load from the middle of a busy highway, and seeing a rocking chair of mine go sailing through the air after being assured it wasn’t going anywhere, I feel quite justified in my nervouseness about hauling stuff in the back of a pick-up.  So I stayed home and prayed it would get here safely.  It took them several hours to get this thing secured but they did it.  And arrived without mishap.  They took the back way home, through the country instead of the way we normally go.  I think Travis was quite relieved to get home. 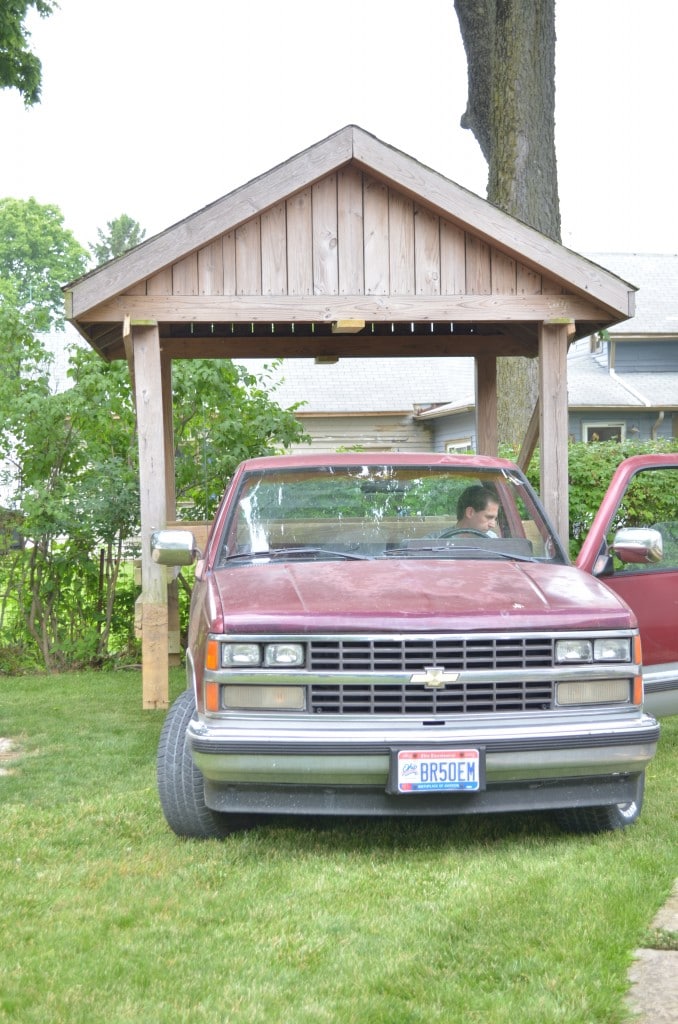 They spent a bit of time getting the thing lowered, but once it was on the ground the truck drove right out.  And there it sits just waiting  its turn in the line-up of projects around here.  It falls in somewhere after finishing the stairway, finishing the laundry room, finishing the bathroom cabinets, finishing the living room woodwork, new windows in the kitchen… 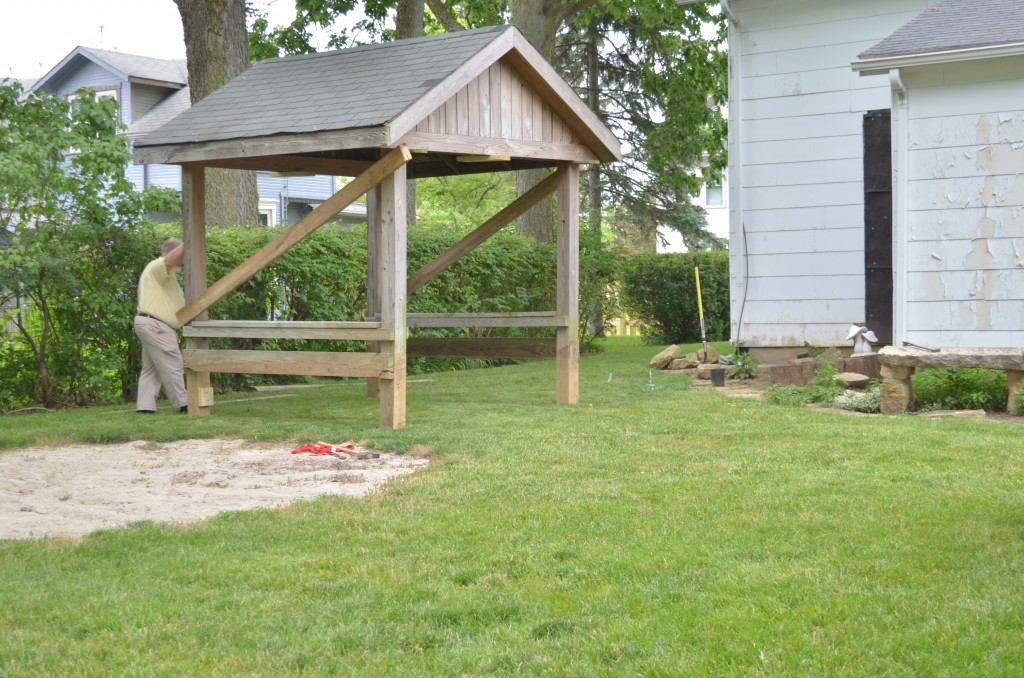 It will happen when the mood strikes, money is available, and when I figure out how to make it HIS idea to get going on it 😀

Now if we could just get our a/c unit installed we could move on to that list of projects and perhaps mark something off it!  Because you know we will be adding some new project by next year!

Sign up for all the Strawberries and Cream from Sew a Fine Seam! (discounts, news, product launches, info and more!)
« Monday Morning
Rusty Fence update and some bits and pieces of randomness »