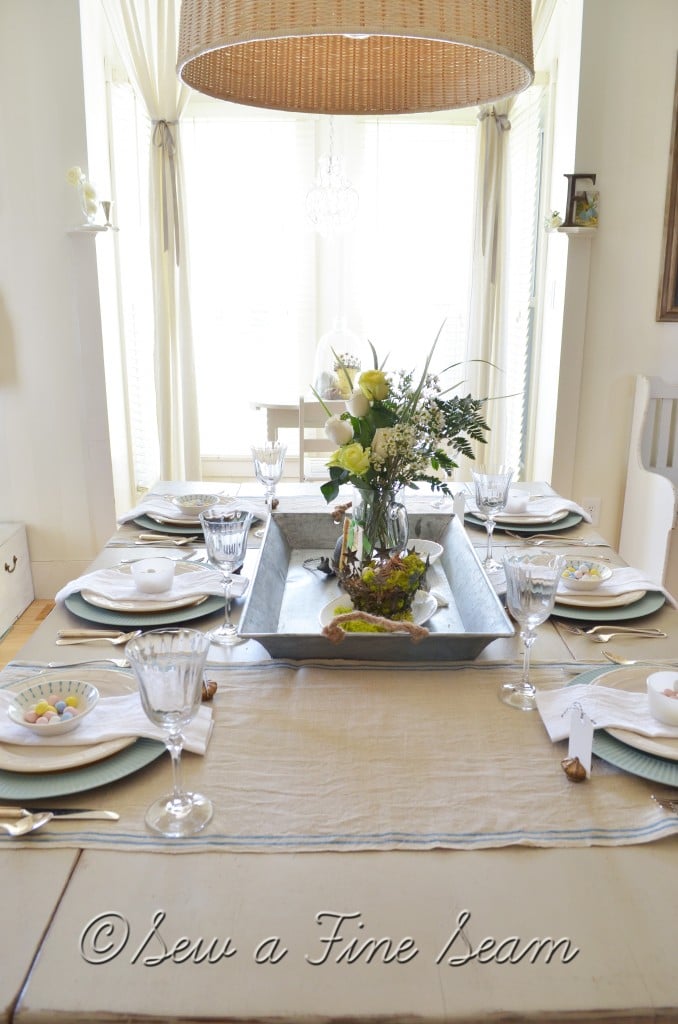 Setting a table just for a photo shoot?  Am I crazy?  No, I’m a blogger. 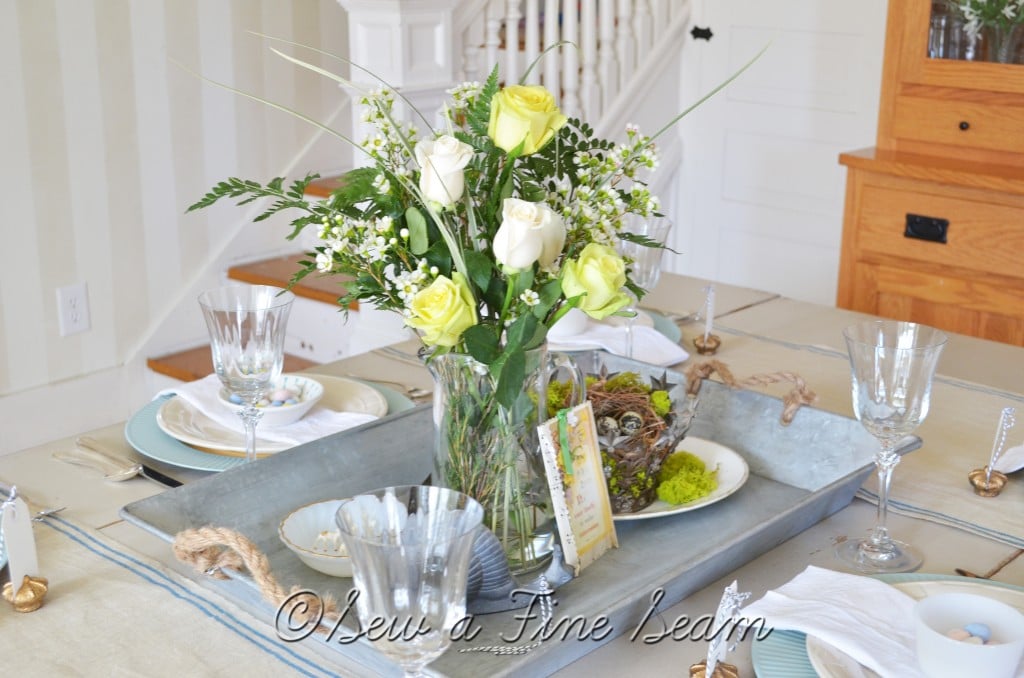 What’s a blog?  That’s what the girl at the flower shop said when I told her why I was buying flowers.  And when I said I was setting an Easter table 3 weeks before Easter because I had sunshine that day she looked at me like I had grown another head.  Cause why in the world would you set a table all fancy shmancy so early simply because it happens to be sunny?  Sigh.  Yeah, that would be because I’m trying to be a good photographer too, and a good photographer uses natural light.  At least the good photographers I know 😀 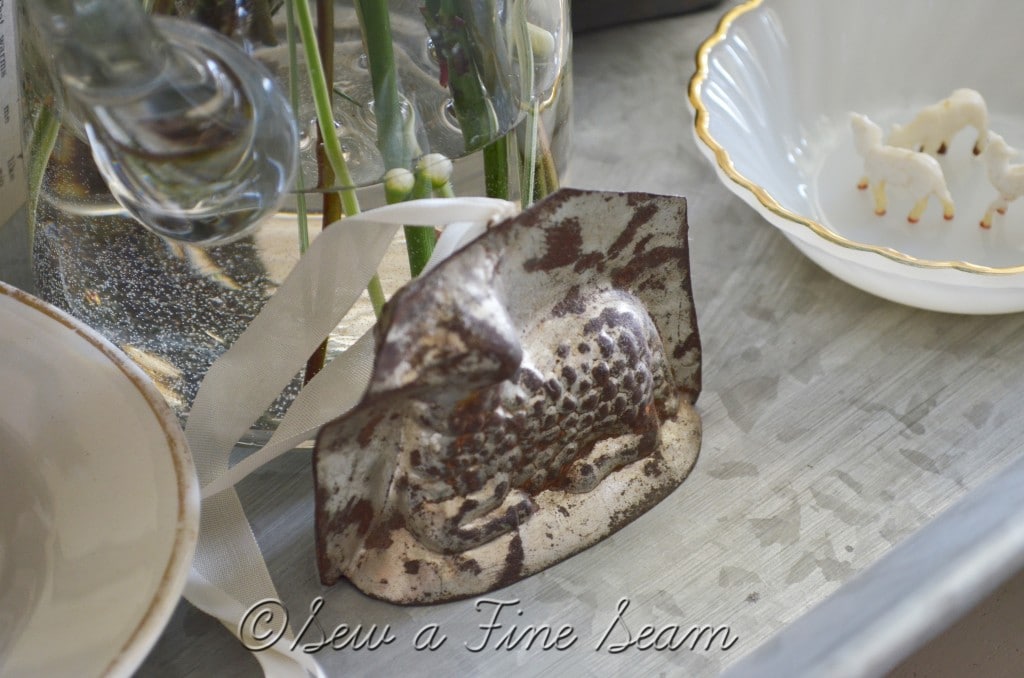 Flowers bought, I headed home to prep and fluff and decorate to my heart’s content.  While I had sunshine. 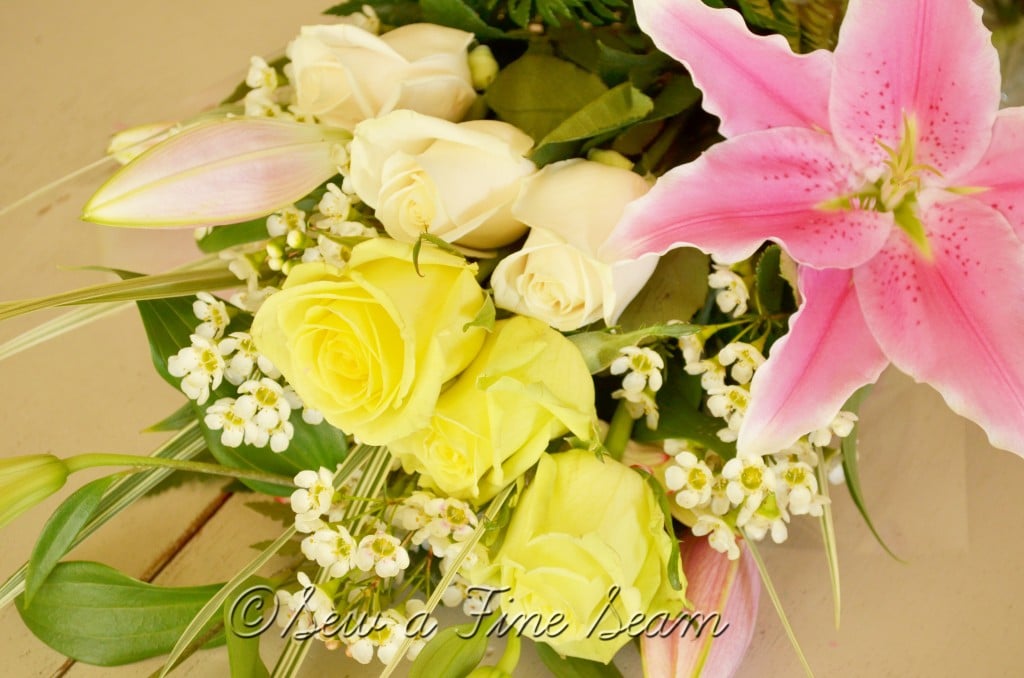 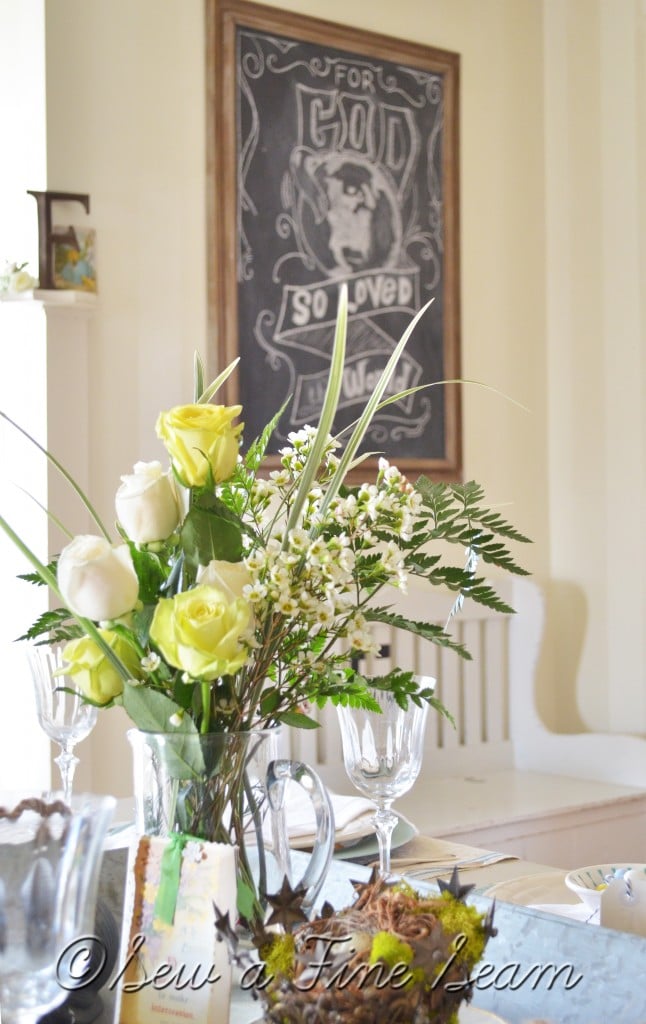 My girls thought I was a little nuts too.  Cause I kept saying ‘No, we are not eating in here.’ 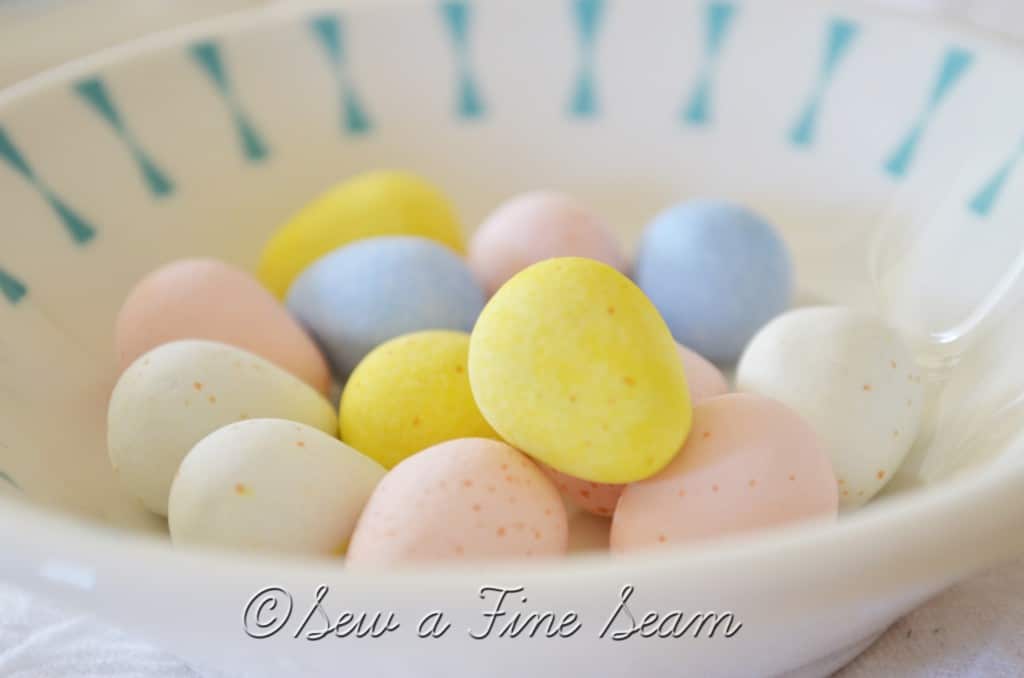 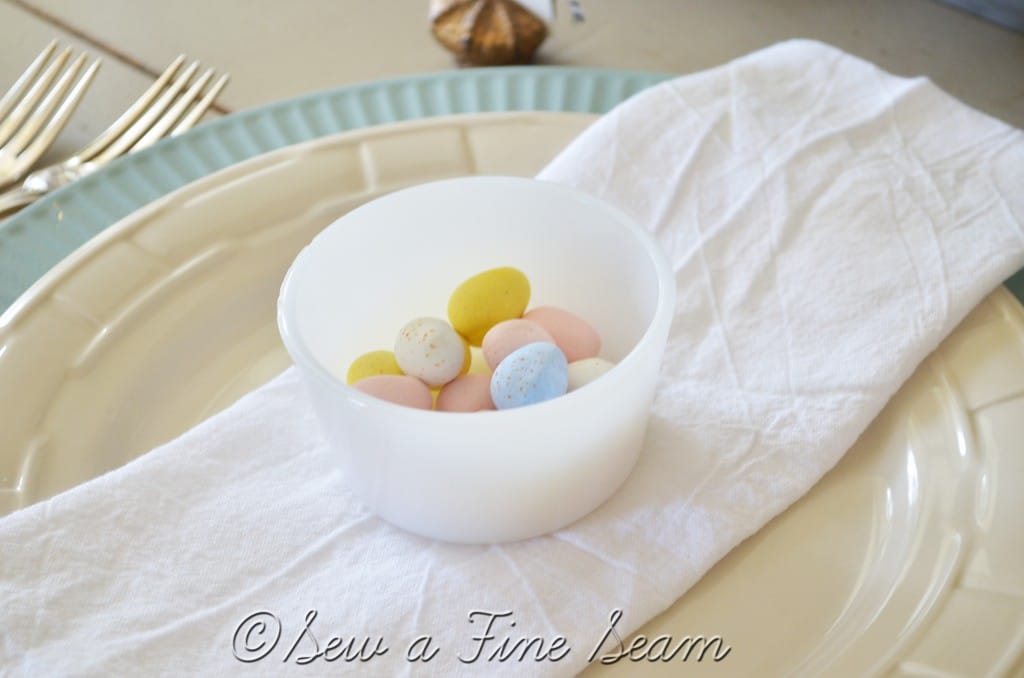 Everyone gets the AS chalk paint out to paint their chargers when setting a nice tablescape don’t they? 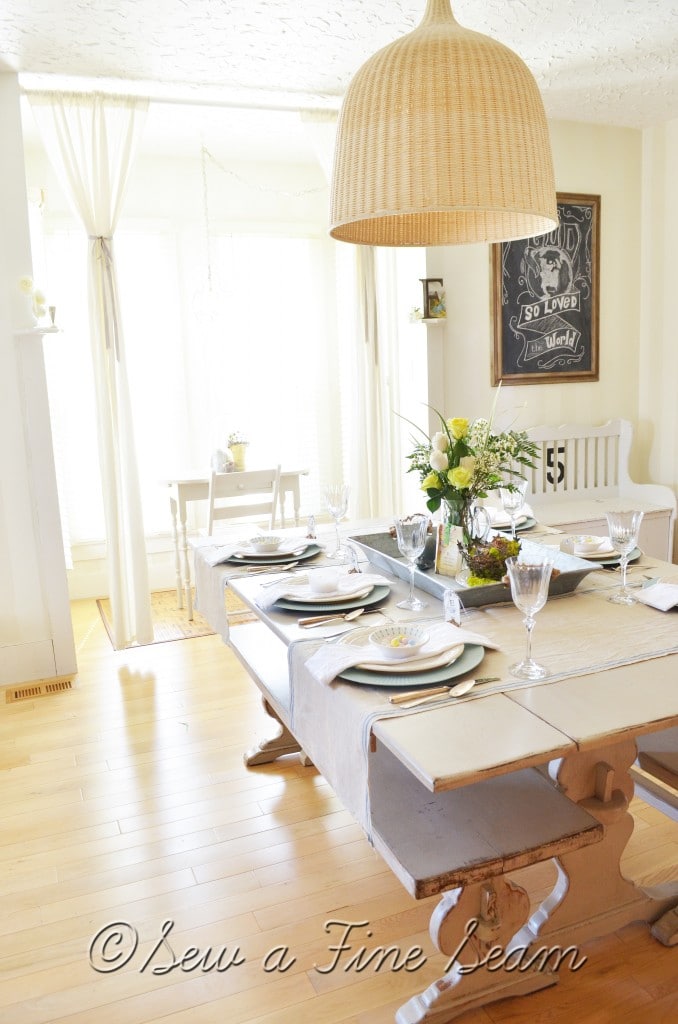 My stack of gold chargers from Dollar General’s after Christmas clearance were getting annoyed that they were still stuffed on a shelf and ignored.  Seriously.  They were purchased for a little bit of nothing so they really expected to be put on display much sooner. 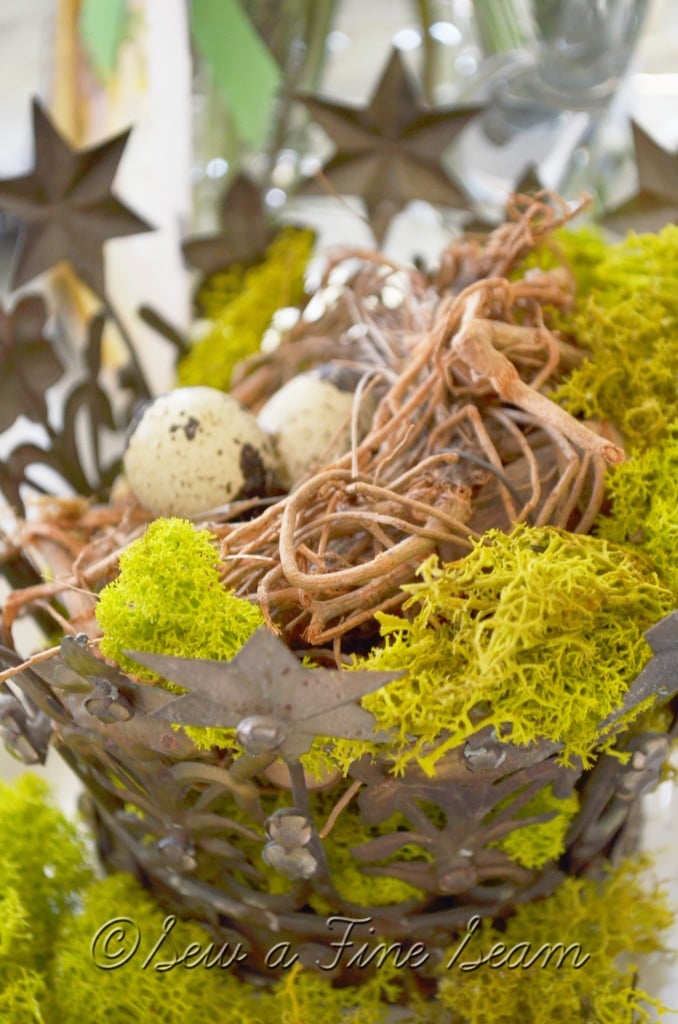 The gold had to go though, it just wasn’t the look I was after.  So out came the paint and in less than 10 minutes I turned six of those chargers Duck Egg Blue.  And I think the chargers are happier in a lovely blue anyway.  The paint dries so fast I was setting the table as soon as I had the linens ironed. 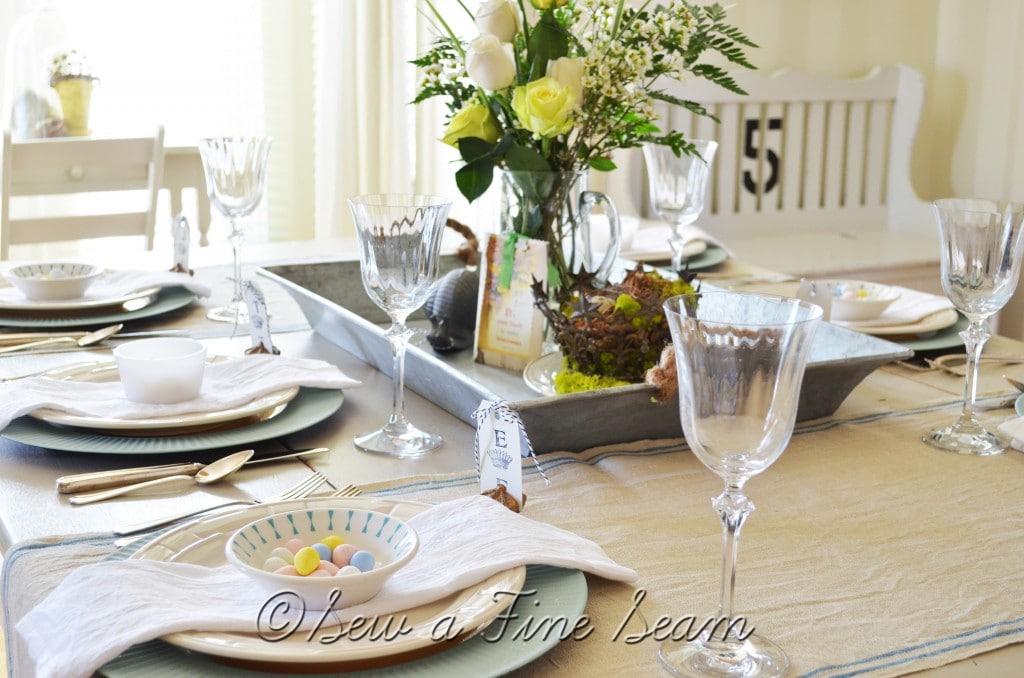 When you don’t have cloth napkins the color you want, improvise.  I had some white flour sack tea towels.  I tore them in 4ths, folded them the size I wanted, tucked the raw edge in and pressed them good.  This was just a tablescape photo shoot after all.  If I were serving a meal I would have taken the time to sew some simple hems and then folded and pressed. 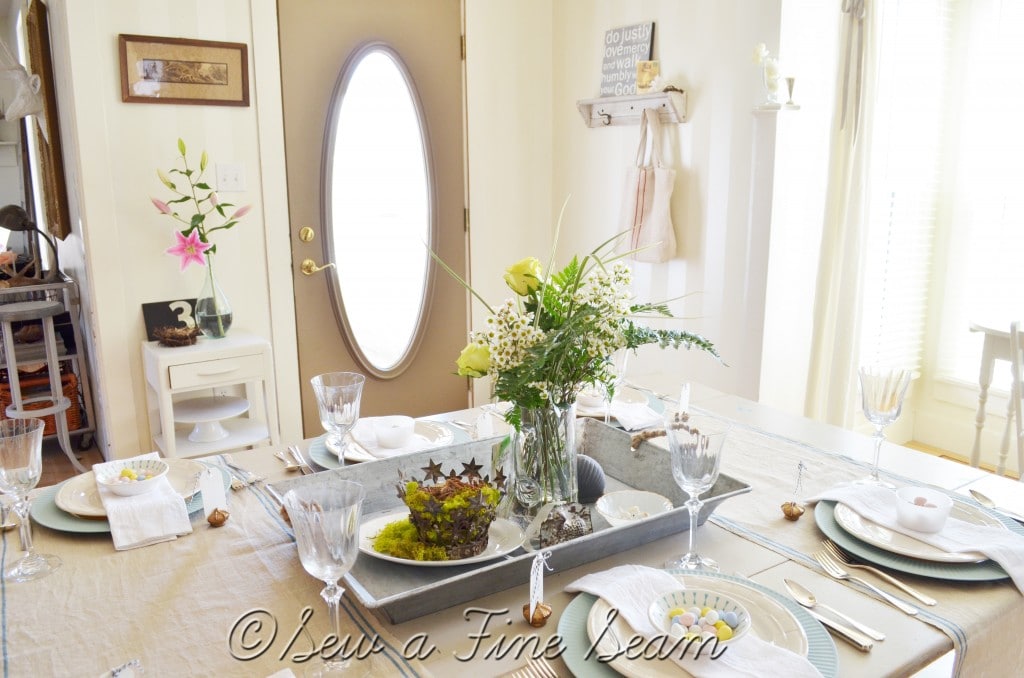 Flower arranging is fun.  I recommend buying flowers that you like and creating your own centerpiece.  There is a ton of inspiration out there for creating unique centerpieces. 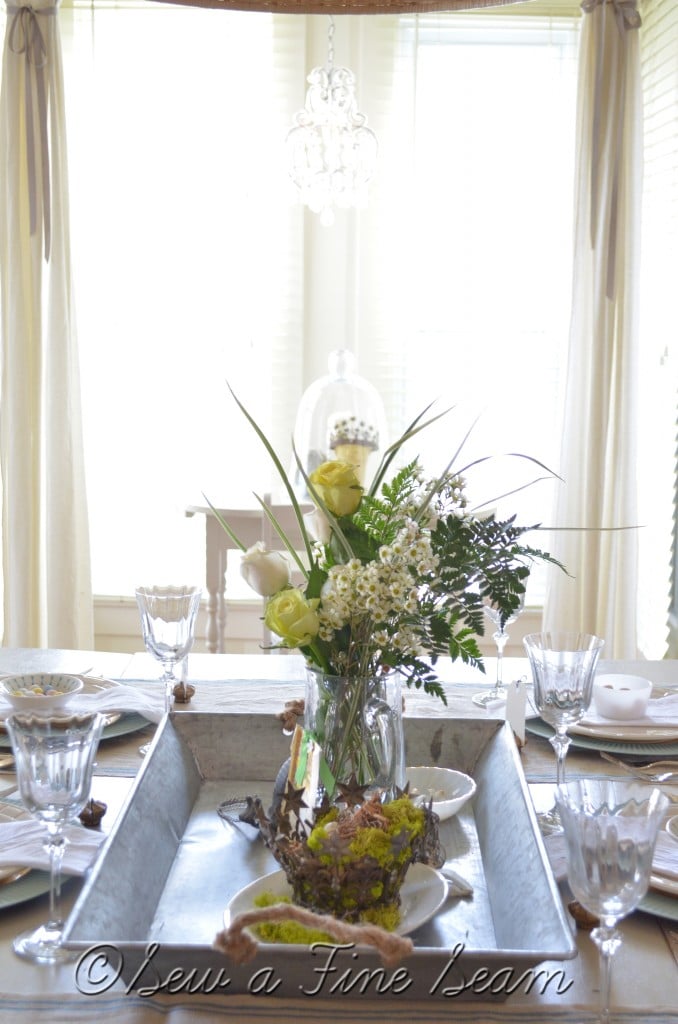 If you have never set a table just for a photo shoot and you are contemplating it let me assure you it is so much fun!  It takes a LOT of time but it’s so worth it!  It’s fun to work with it till you really like what you have done.  Since you don’t also have to fix food and clean the house like you would if you were actually having someone over for dinner you can relax and just have fun with it.  (you toss all the excess stuff in the dining room into another room where it won’t show in the photos, dust mop your floor, and call it good 😀 ) 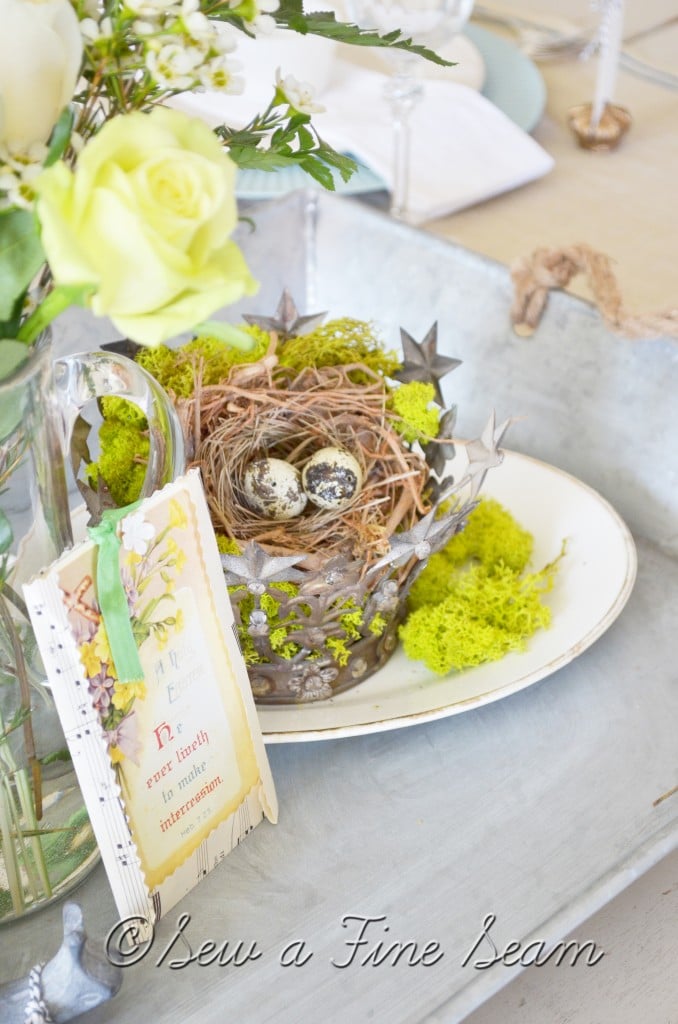 Making some fun food the next day to photograph on the nicely set table would be fun too.  Didn’t happen this time though.  I did have good intentions of trying to do that but it didn’t happen.  The sunshine didn’t last either so it was ok. 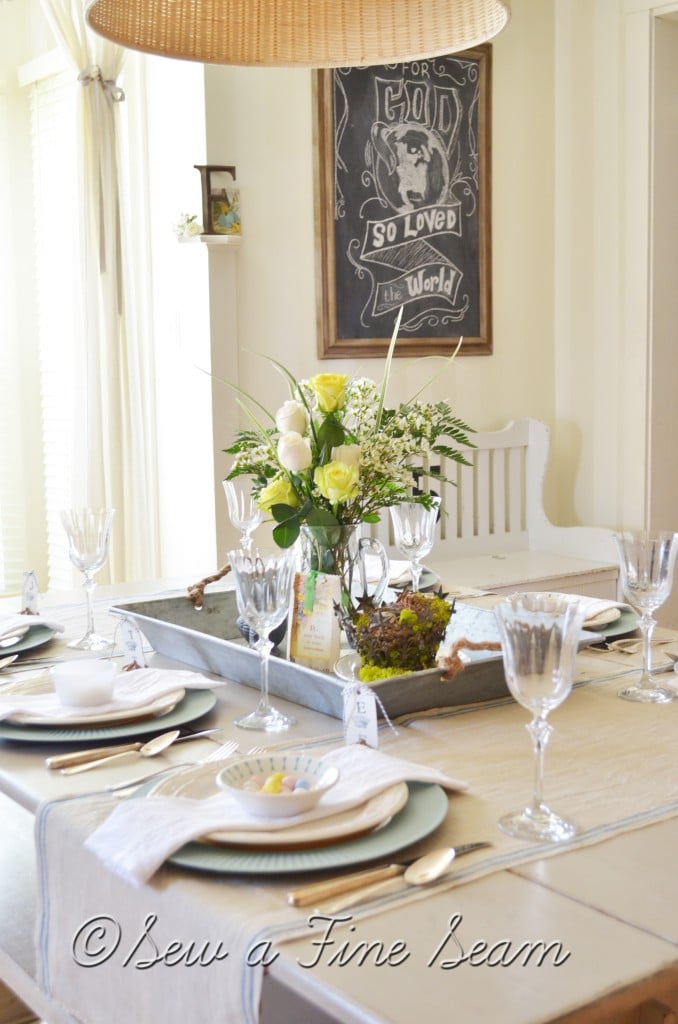 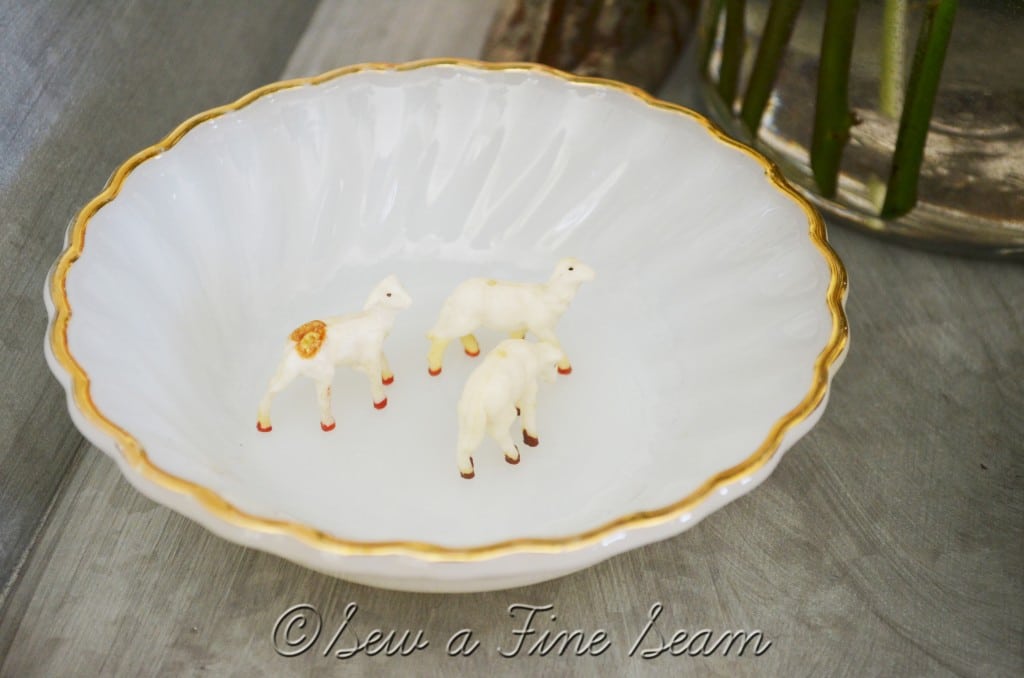 I really must reset the table and make a really yummy meal for Easter.  I think after looking at my table for the 4 days it sat there, my girls probably deserve to eat at a fancy shmancy table don’t you? 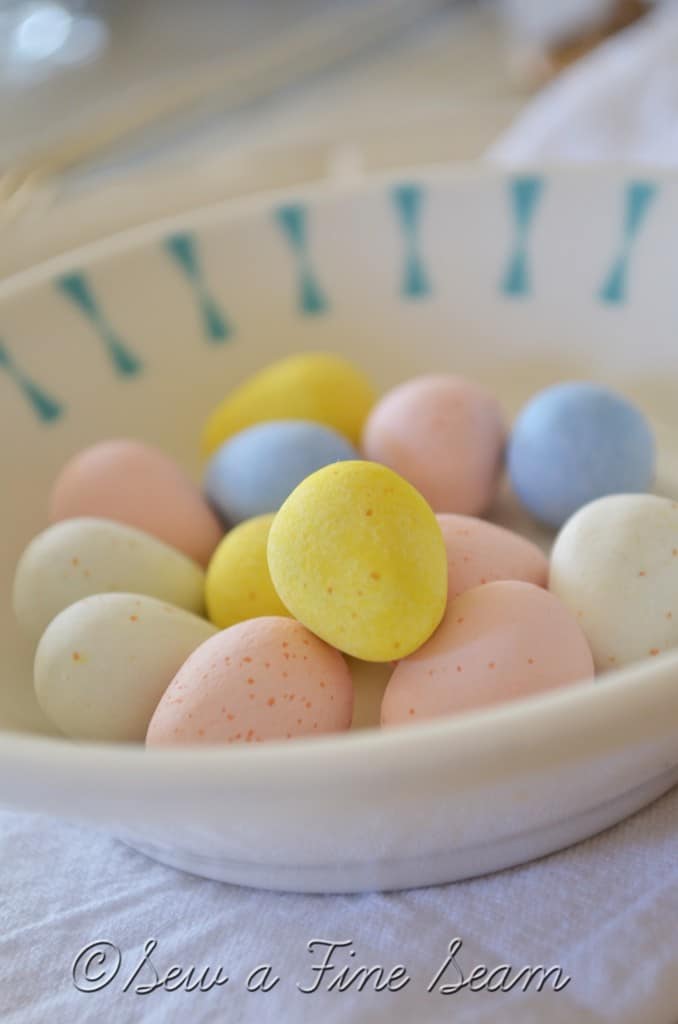 Have you ever set a table just to take pictures of it?  What do you do to celebrate Easter? 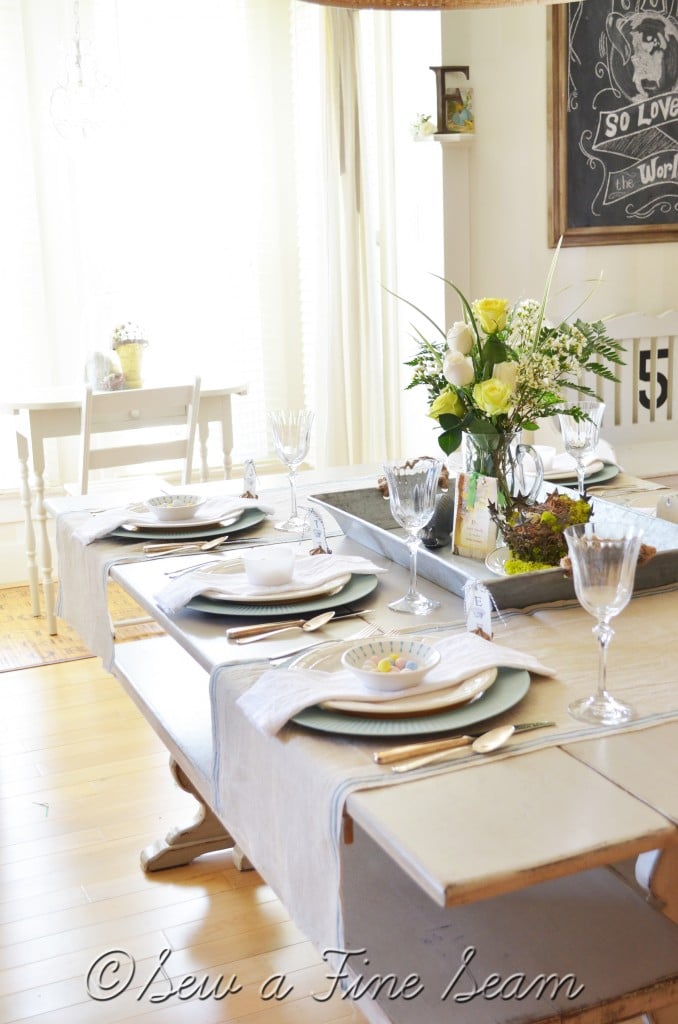 Sign up for all the Strawberries and Cream from Sew a Fine Seam! (discounts, news, product launches, info and more!)
« Snippets…
Tank Top Turned Dress »