A vintage typewriter has been on my list of things to find for a while now.  The Teenager wanted one to use.  Like Kit, the American Girl. I wanted one just because they are a fun decor object 🙂  I mentioned here that I had found one at the Portland Flea.  The Portland Flea takes place at the Tri-State Gas Engine and Tractor show in Portland Indiana.  I’ve been to the flea there before and it is worth the drive!

I found several things to bring home with me, the best thing being a vintage Royal Typewriter. 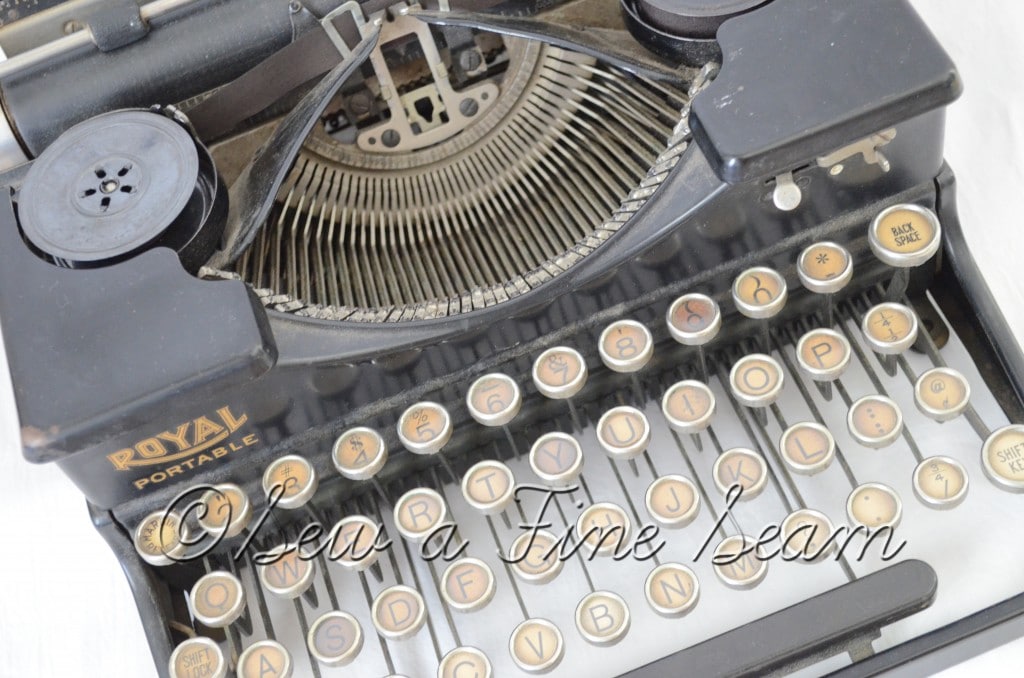 And while I call it vintage it’s really old enough to be called an antique.  But I like the word vintage better.  It’s just more fun to say!

A few weeks before we went to the Portland flea a young friend called me up wondering if I had a vintage typewriter.  She was looking for one to use in her wedding.  I tried to give her some ideas of other places to try since I didn’t have one.  But it put the idea of having one very close to the front of my mind – and very timely that was too!

When my sister and her family were here, my Dad suggested we go to the Gas Engine Show at Portland.  I thought ‘ok sure’.  And then I remembered the great flea that always goes with it and I thought, ‘OK SURE!!!’

I have recently sold several of the vintage items I had on etsy and thought maybe I could find a few little things to restock with at the flea.  And I determined to look for a vintage typewriter.  I even called my friend back to see if she had found one, and told her Mom I was going to be on the lookout for one.

We hadn’t been at the flea very long.  We took all 5 kids (my sister’s and mine) and they were a little less than thrilled about going.  I did NOT want all 3 girls with me, and I told Travis that but somehow they all ended up with me anyway.  Little Sister insisted she would NOT go with Dad, and then about 20 seconds after the men were out of sight and we were headed the opposite direction she wanted Dad.  And continued to whine about wanting Dad for the next 2 hours till we finally ran across Dad and I happily handed her over!

Anyway.  Back to the typewriter.  I was just itching to do some serious shopping but our kiddos were HUNGRY!  It was almost lunch time so we headed for the lunch stands, me with my head whipping from side to side to take in all the vintage goodness we were WALKING RIGHT PAST!

And then I spotted it.  A darling vintage typewriter.  Black with cute round keys.  And the ribbon still intact.  I immediately let the rest of the group disappear as I headed directly over to the table holding my prize.  Of course I tried not to show too much excitement – I looked at a couple other things and asked the price on a couple of picture frames.  (I hate it when nothing is priced)  Then I asked about the typewriter.  “$25.”  Pause.  “Will you take $20?”  “Sure.”  “SOLD.”  I whipped out my $20 bill so fast I doubt she saw where it came from.  That typewriter was MINE.  Well, The Teenager says it is HERS, but it is sitting in MY living room!  Heehee! 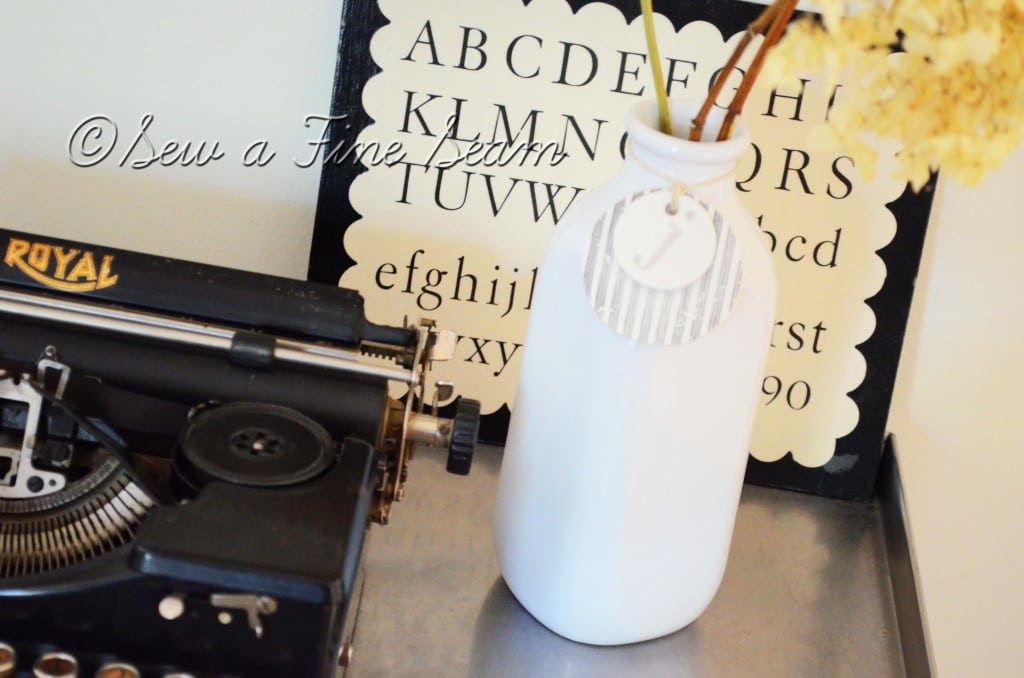 The totally adorable clay tags are made by Jami at Freckled Laundry.  She sent these and a couple of others when she sent me a sewing project I did for her recently.  I have been very negligent in blogging about the tags.  I meant to, but somehow never got around to it. 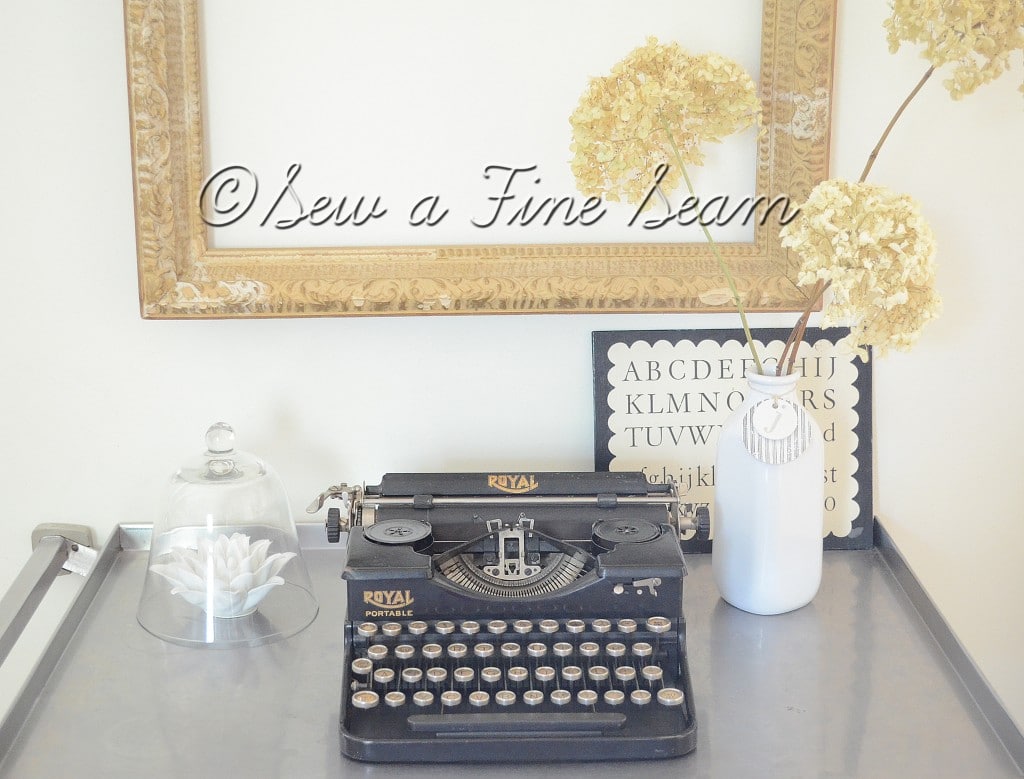 My friend was delighted when I called and told her I had found one.  She had found one available to her but it wasn’t nearly as close and accessible as this one.  It makes me happy that I will be able to help her out this way – and I got a great decor object out of it too!  Now to find a new ribbon for it so it works a little better for The Teenager’s typing 😉

And just an update if you read this post about the fact that I forgot yesterday was my 15th wedding anniversary – My husband picked up groceries at Aldi on his way home so he grabbed a bouquet of their flowers and brought home to me.  We had BLT’s for supper.  The house was not all spic and span but I did clear away some clutter so it looked a little more inviting.  We watched ‘Puss in Boots’ with the kids.  Nothing romantic, but hey it’s just a day – we can have a date night or weekend away later right?!!!

Sign up for all the Strawberries and Cream from Sew a Fine Seam! (discounts, news, product launches, info and more!)
« ASCP and Dark Wax
Ruffled Dress and Ruffled Leggings »