On Labor Day I decided I might as well do some labor 😉  So I dug out a chair and small table I had stashed away to be dealt with later.  Later had come.  I pulled out my Annie Sloan Chalk paint, waxes, and brushes and got to work. 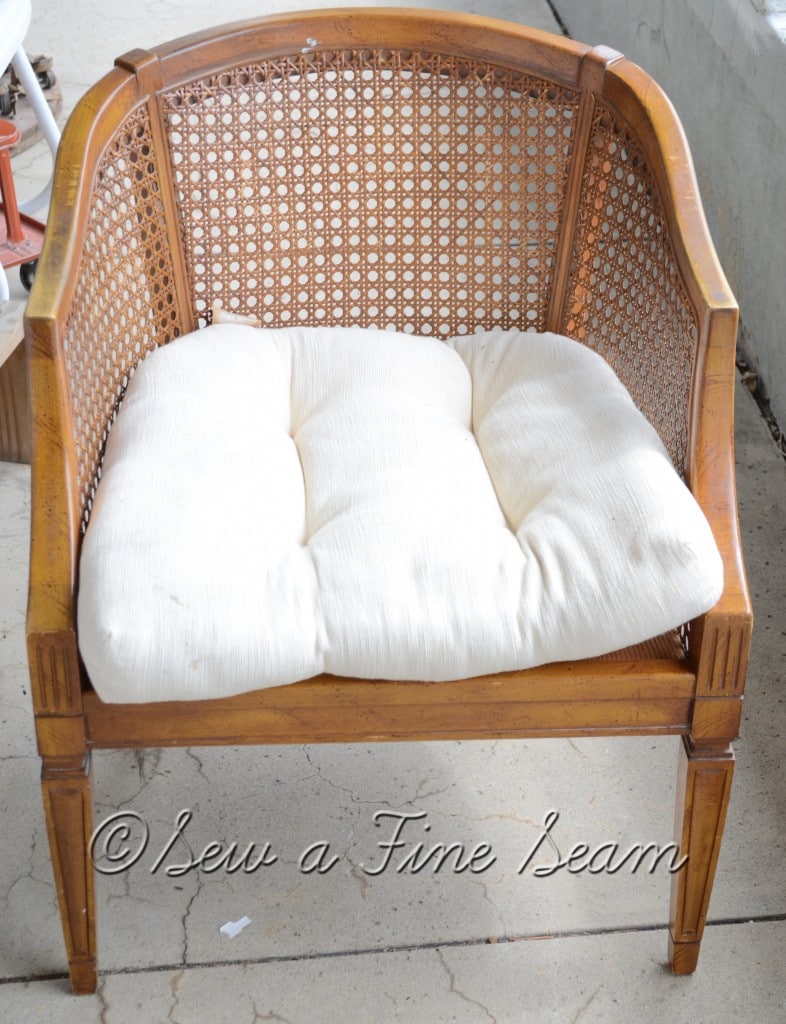 Here is the chair before.  Isn’t she just so lovely??  Not.  I began my projects on the front porch.  The mist that kept coming and going made me think I was in Ireland.  The mist finally started coming down hard enough, and the breeze was just strong enough,  it drove me and my projects inside to the dining room.

Even the bottom, fabric-covered, wood piece of the chair was rather not-so-nice so I pulled all the staples out and recovered the wood and springs.  And I wish it were as simple as saying I pulled out the staples.  I think it took longer to pull them all out than it took to do the entire rest of the project. 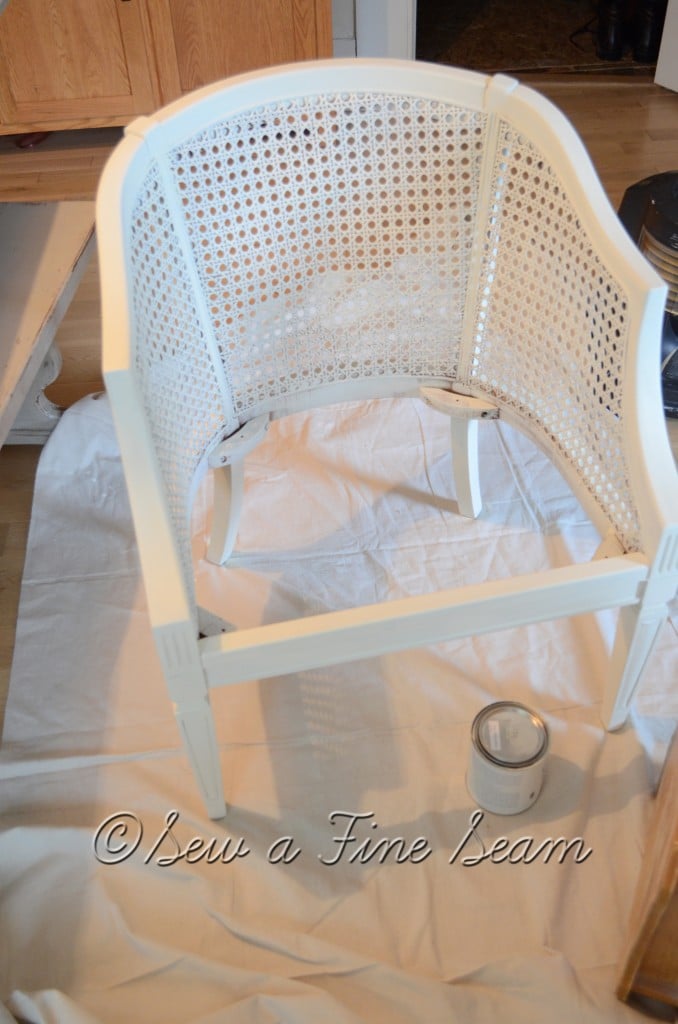 Here is during.  After the mist moved me and the projects inside. 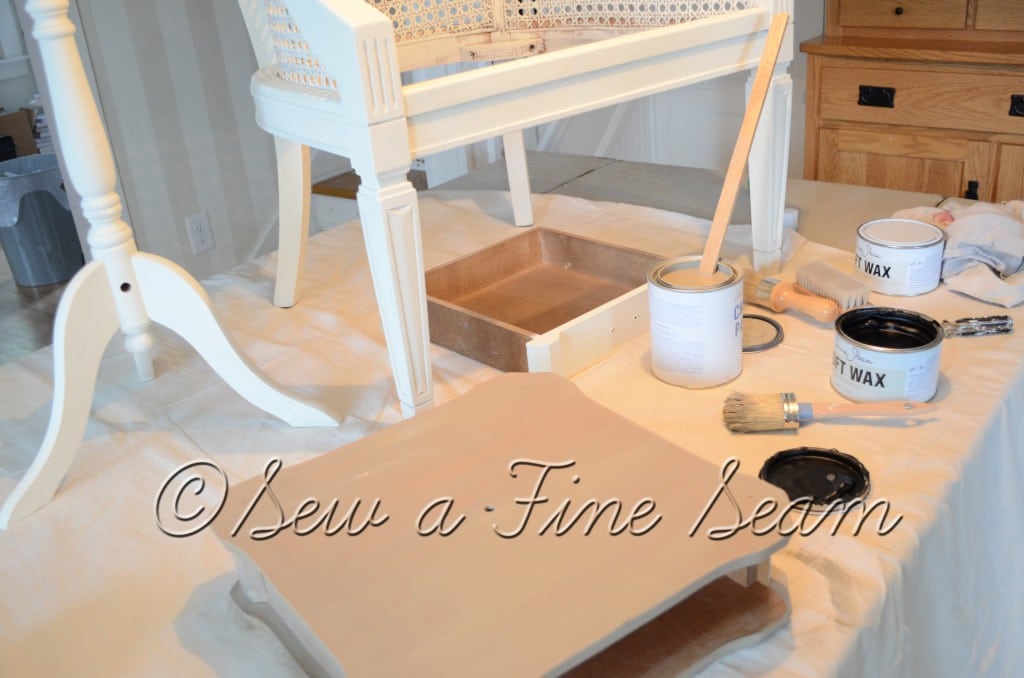 Covering my dining room table with a drop cloth made for a wonderful work space.  Gasp!  I actually used a drop cloth for its intended purpose!  The drop cloth was purchased for my Mom’s brick redo so it has actually been used TWICE as an actual drop cloth 🙂

And here is the finished after!  I used a drop cloth for the new seat cushion.  The original seat cushion had 4 buttons – I like it this way.  What do you think?  Travis says put buttons in it.  But I don’t want to.  I used Annie Sloan Chalk Paint in old white, and gave it 2 coats.  Then I sanded it down to a satiny smooth finish, hitting the edges just hard enough in spots to show the dark wood underneath.  I like it without a wax finish and I was told by a stockist that sanding seals it off and provides a finish.  So we shall see how this wears.  Sew a Fine Seam has some pop-up shop events in the works for 2013 – this chair will likely show up at one of those!! 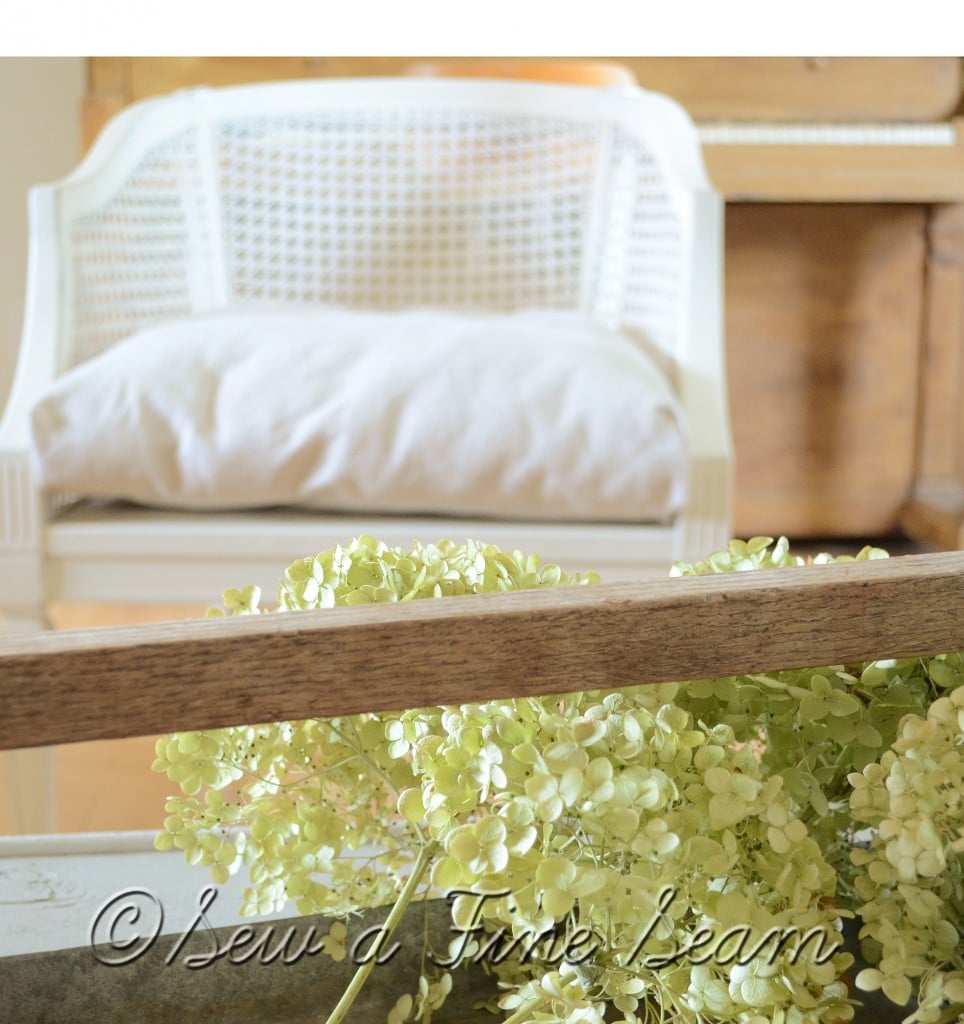 She does look rather nice in my living room with Miss Piano and my vintage strawberry carrier I picked up at the Portland flea. 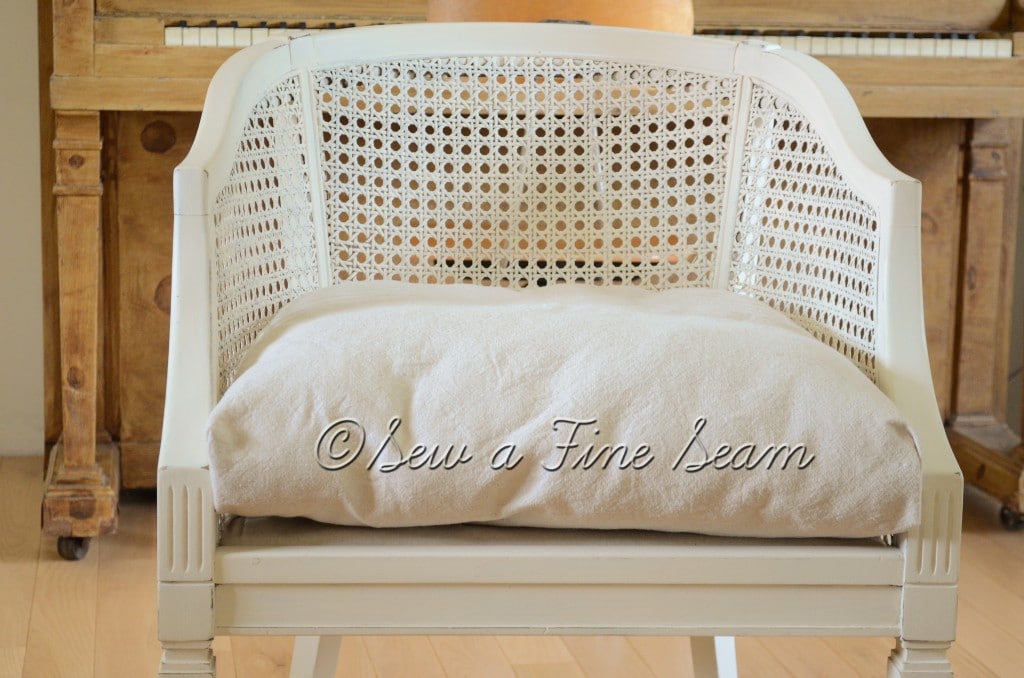 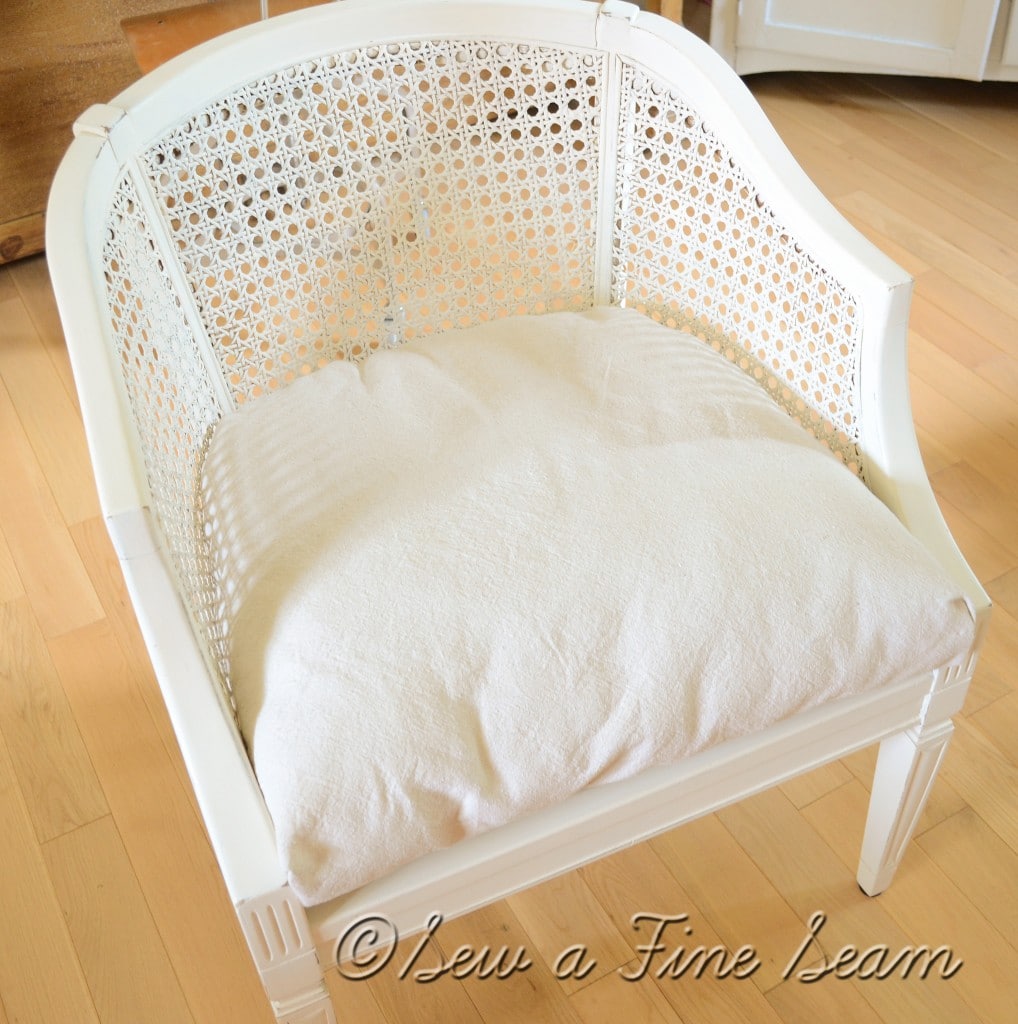 Side note:  I’m sure you’ve noticed by now that I {finally} managed to add a watermark to my photos!  I’m having a love/hate relationship with Photoshop.  One minute I love what it can do and the next minute I hate the time it takes.  But figuring out this watermark is definitely one of my love moments! 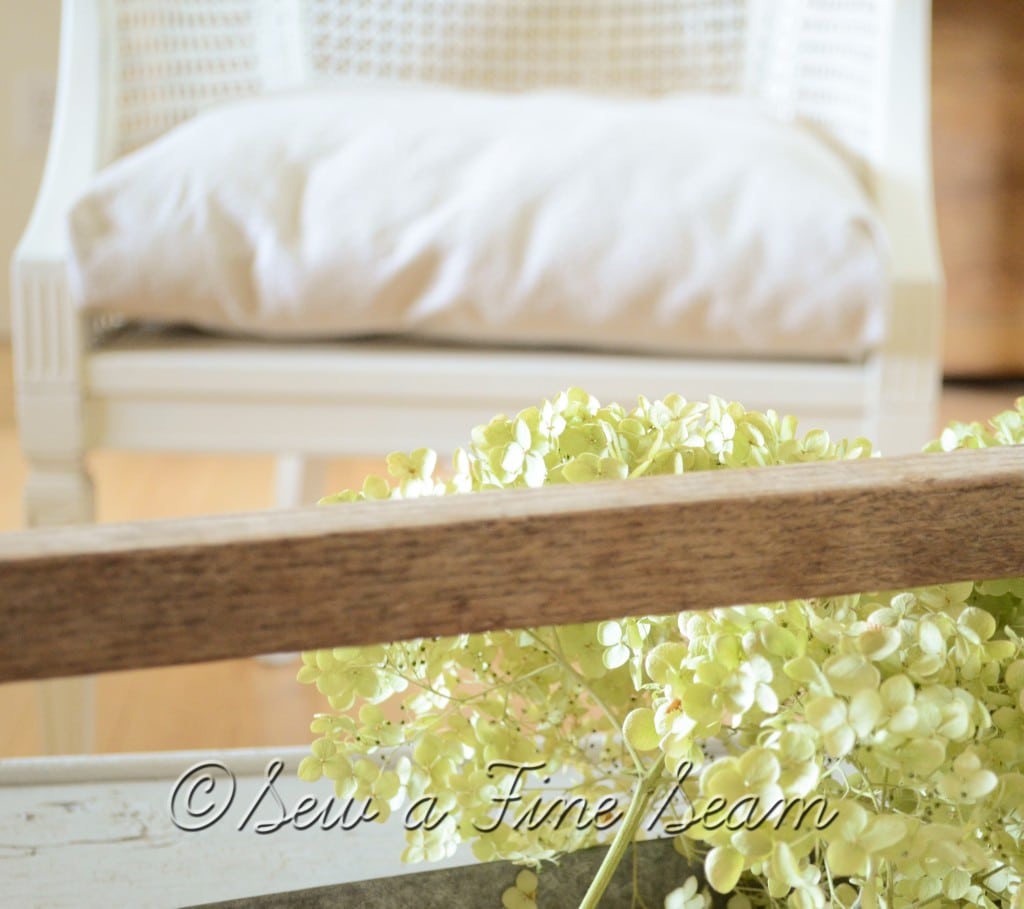 I also worked on a small table that I picked up just recently.  I tried out AS dark wax on this one. 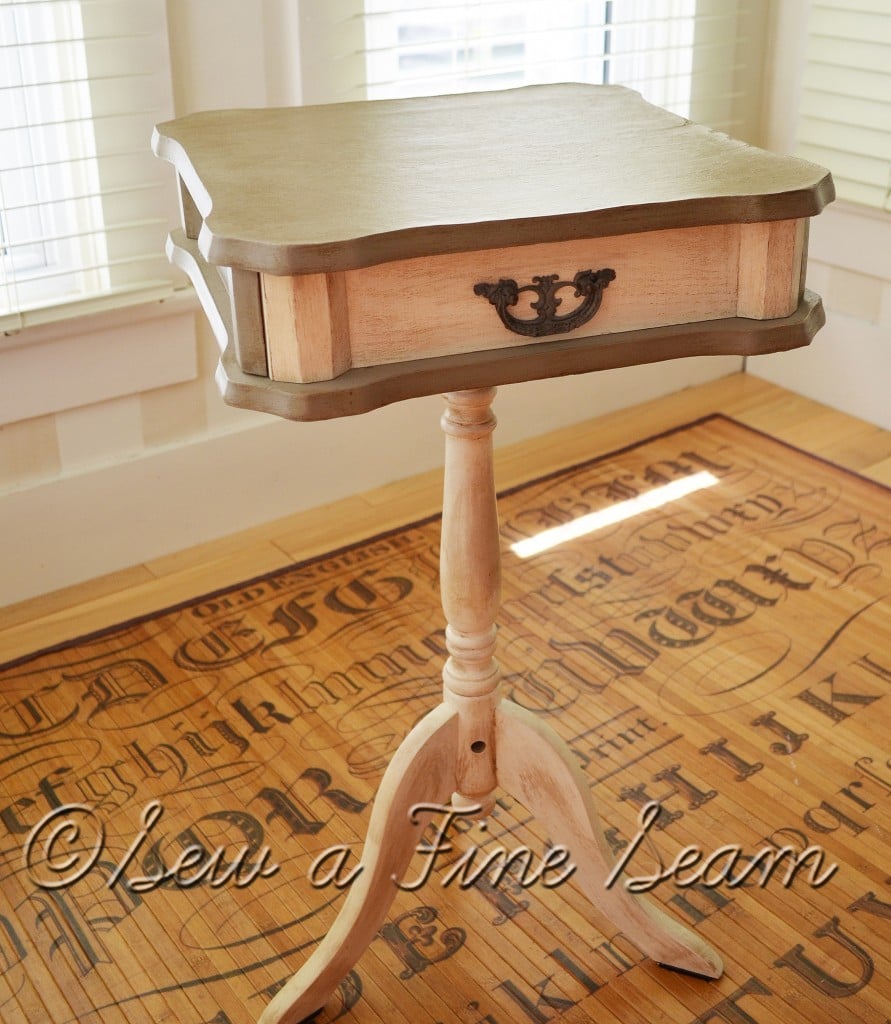 I thought I had a before pic of this but I couldn’t find one after I had it redone.  So just imagine old yellowed varnish peeling and flaking off. 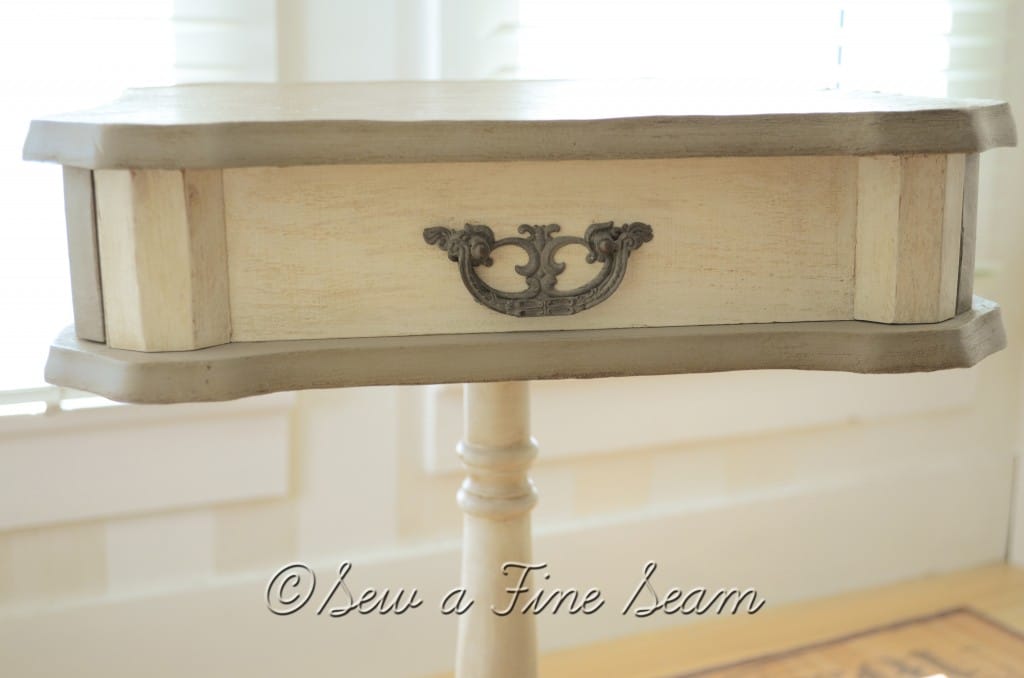 I painted the legs and drawer Old White and the rest I painted Coco.  And then I played with the dark wax! 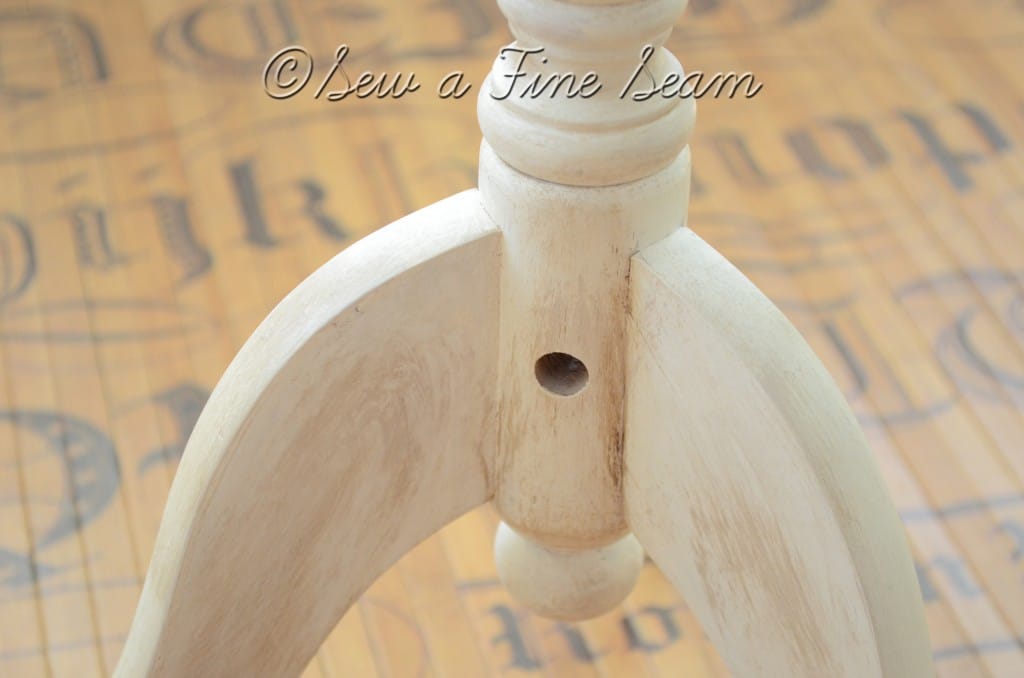 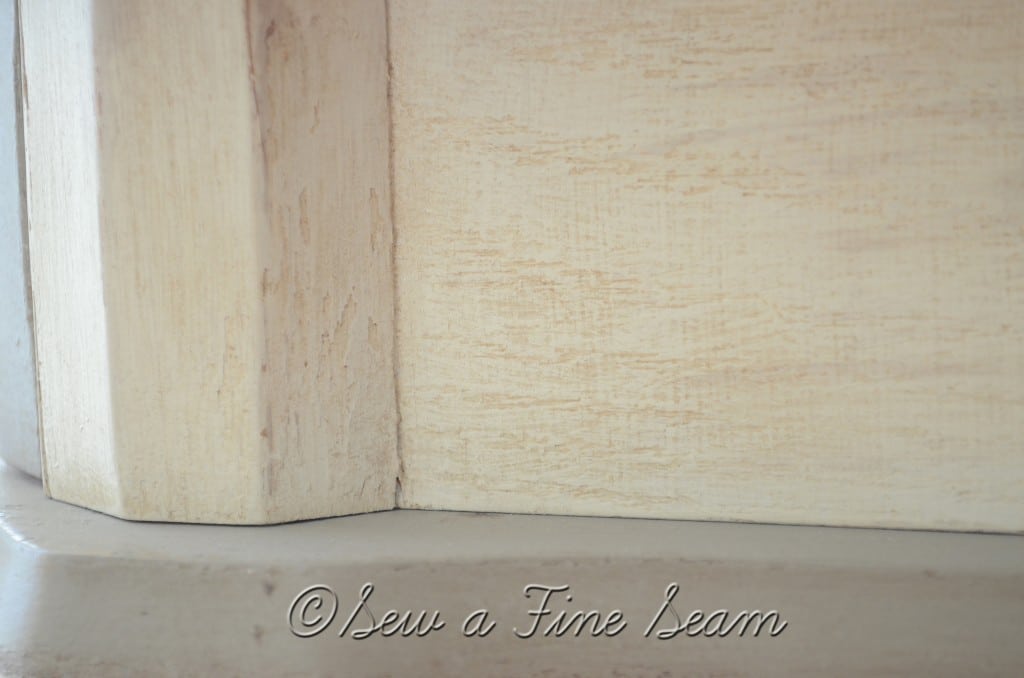 I didn’t want to mess with getting a  new drawer pull so I just quickly brushed some ASCP in Coco.  I like how it turned out. 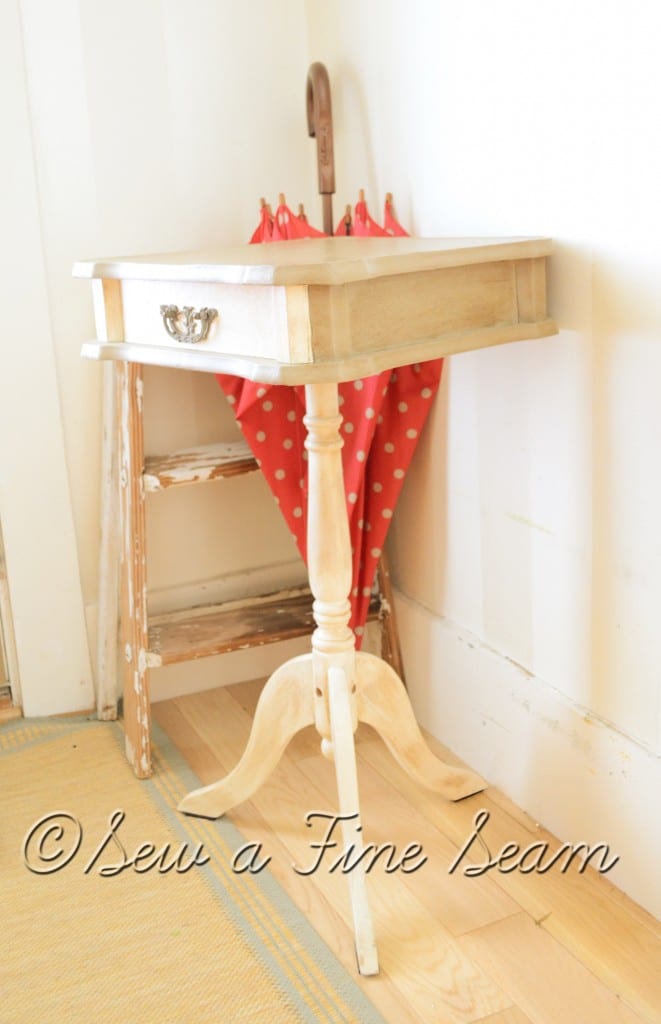 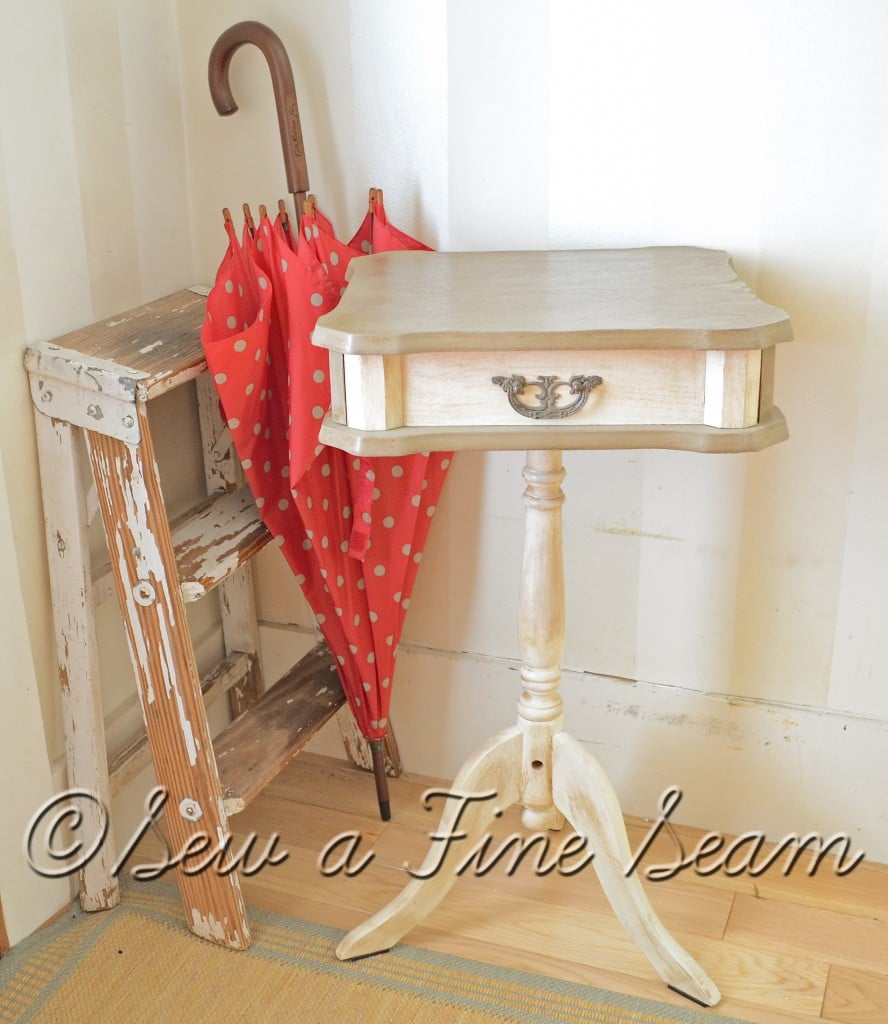 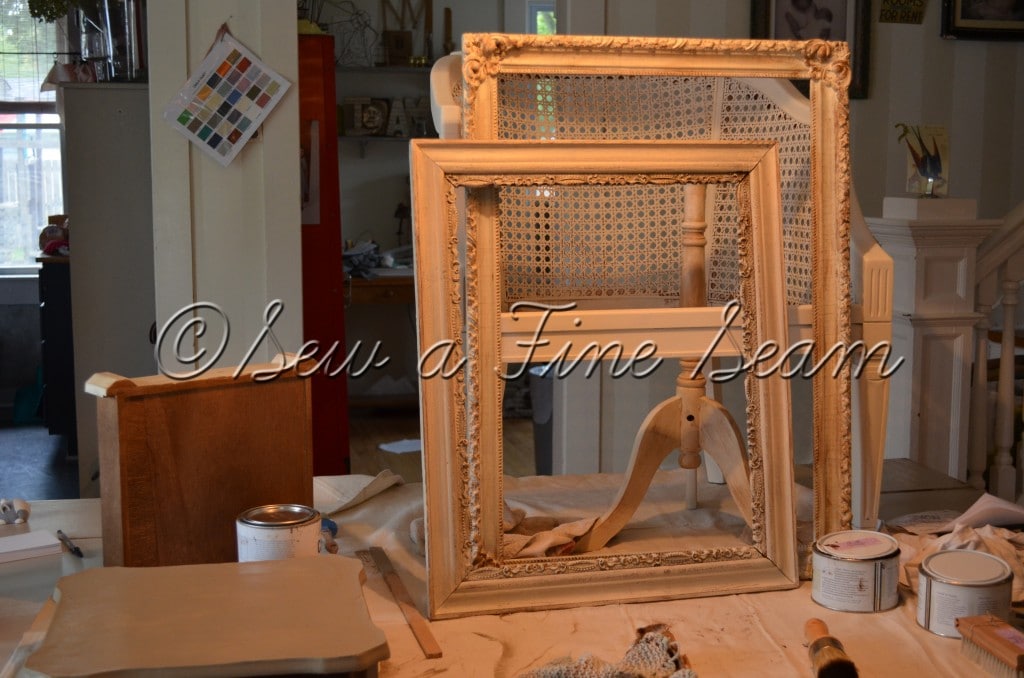 I also used the ASCP in Old White and the dark and clear wax on these frames.  I haven’t taken after shots of them yet – will post before and after of them later.  Another really cool thing about ASCP – it is odorless.  So working in your dining room is not a problem.  The dark wax has a slight smell to it but not bad at all.  I just cannot say enough good stuff about this paint and the wax!  I would like to have every single color they make – wish I’d win a giveaway or something – my budget won’t stretch that far at this time!!  Someday…

Sign up for all the Strawberries and Cream from Sew a Fine Seam! (discounts, news, product launches, info and more!)
« Annie Sloan Paint Gives Brick an Update
Vintage Typewriter Best Find of the Year! »