Nothing tastes better in the hot summertime than homemade ice cream.  Homemade ice cream is cheaper than taking everyone to the Pop-up Ice Cream shop down on the corner, and we think it’s better too.  Well, I guess the kids don’t always think so – they like to spend Dad’s money 🙂  They do, on occasion, pay for the ice cream themselves.  And The Teenager is now old enough and brave enough to take Middle Sister and Little Sister and walk down there sans adult.  I’ve had some requests for my homemade ice cream recipe so one of the recent times we made some I took a ‘few’ photos of the process.  Such is the life of a blogger – camera on hand at all times! 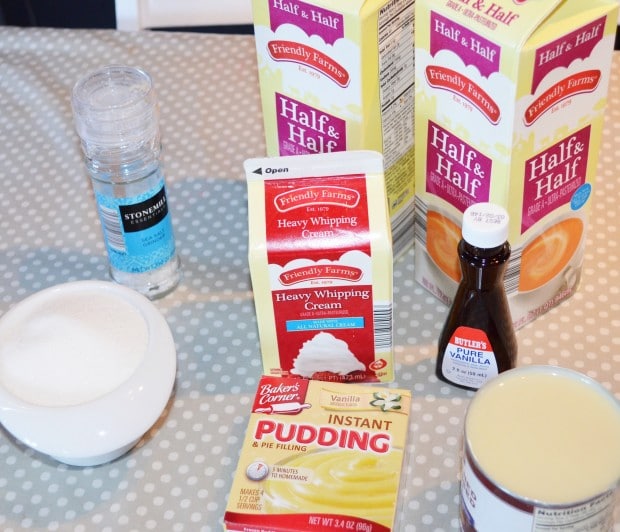 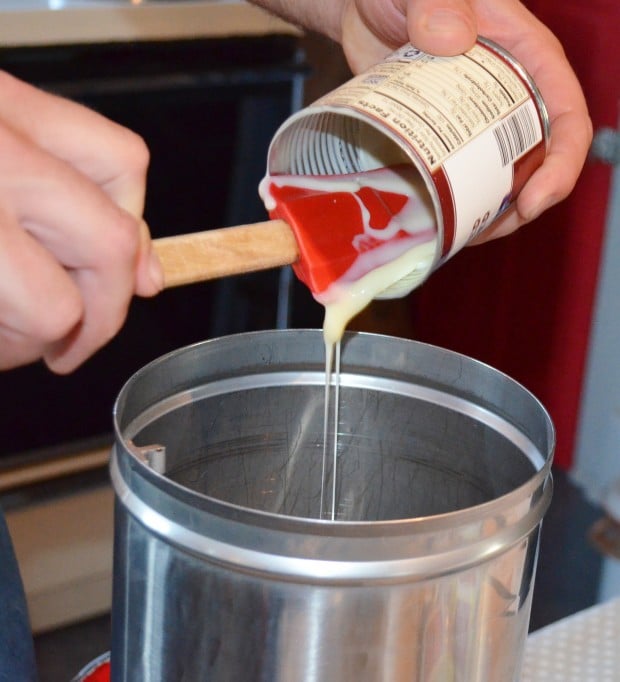 I put the sweetened condensed milk in first so it doesn’t ‘splash’ the cream. 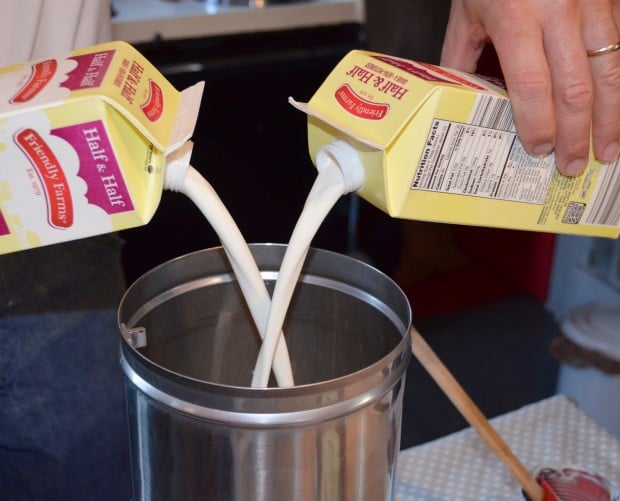 My hubby watches like a hawk to make sure every single bit possible gets poured out of those cream containers.  To the point of driving me batty sometimes 🙂 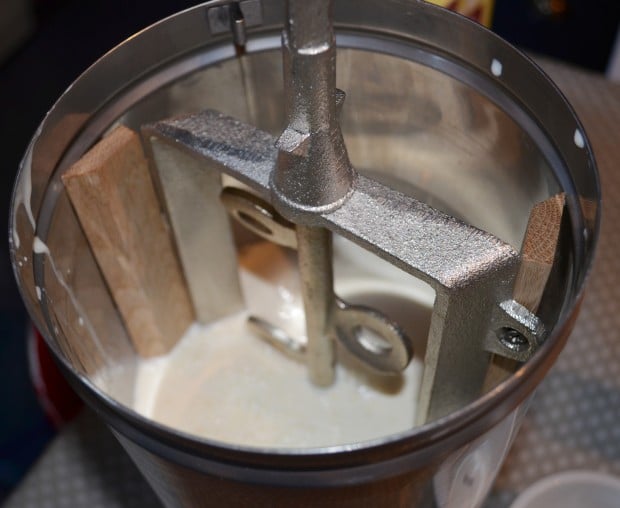 After all ingredients are in the ice cream can, place dasher inside. 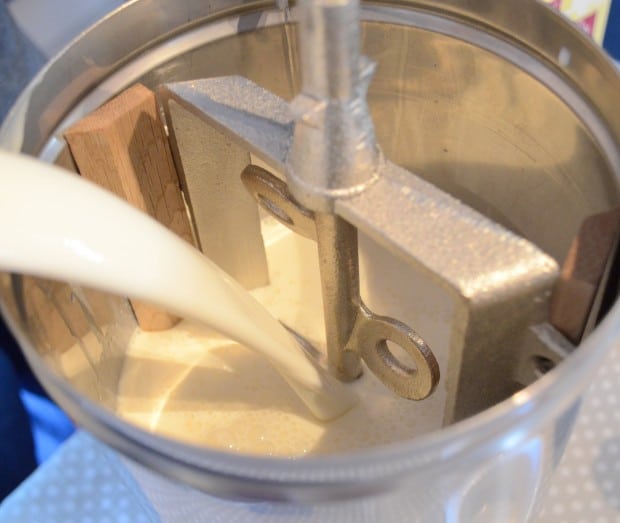 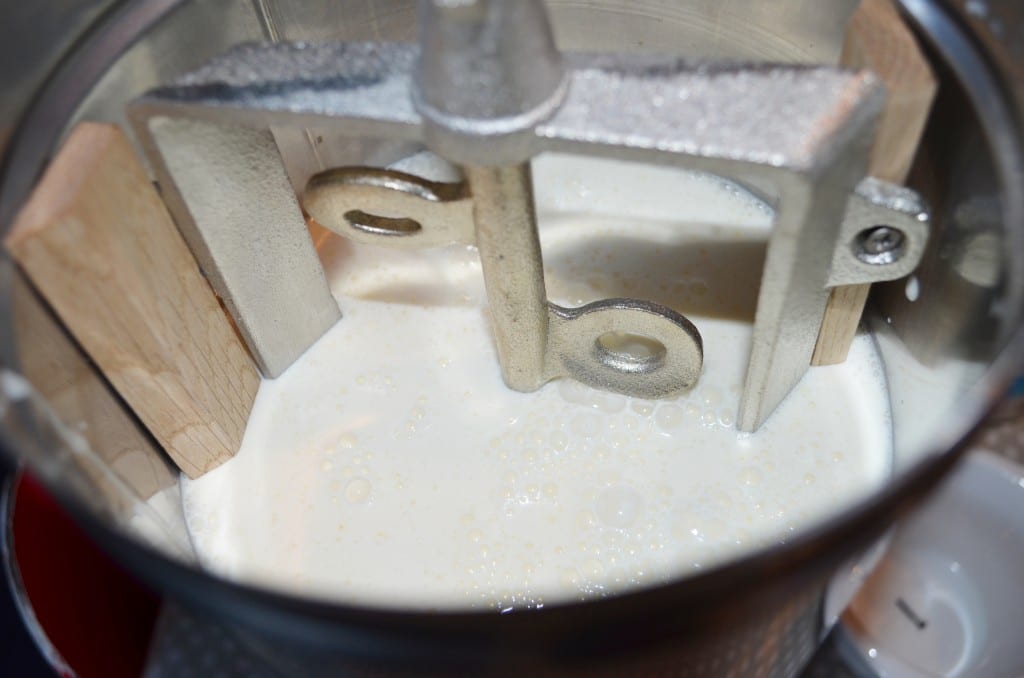 Add whole milk to the next to top paddle on the dasher.  If you use anything with less milk fat than whole milk don’t fill it quite this full. Trav  is rather insistent that we have whole milk around when we make ice cream.  Which really isn’t a problem because we usually have whole milk and 2% milk in our refrigerator.  When you go through an average of 7 gallons of milk a week it’s a safe guess that we will have some on hand!!  No we don’t make that much ice cream – we drink milk! 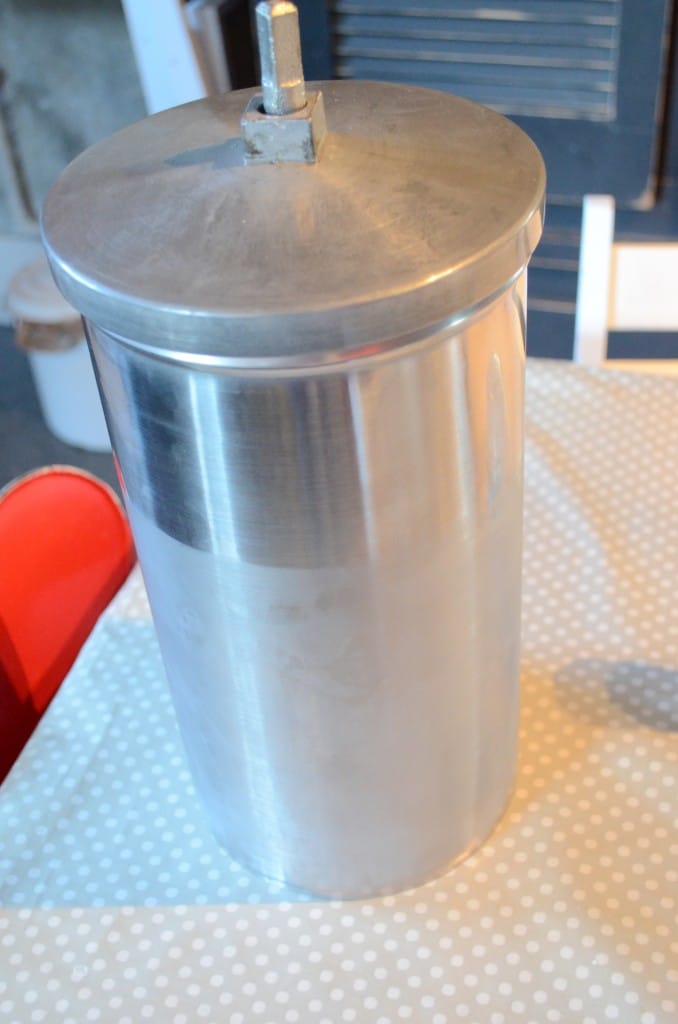 Here is the can, already sweating, ready to go to the bucket for freezing. 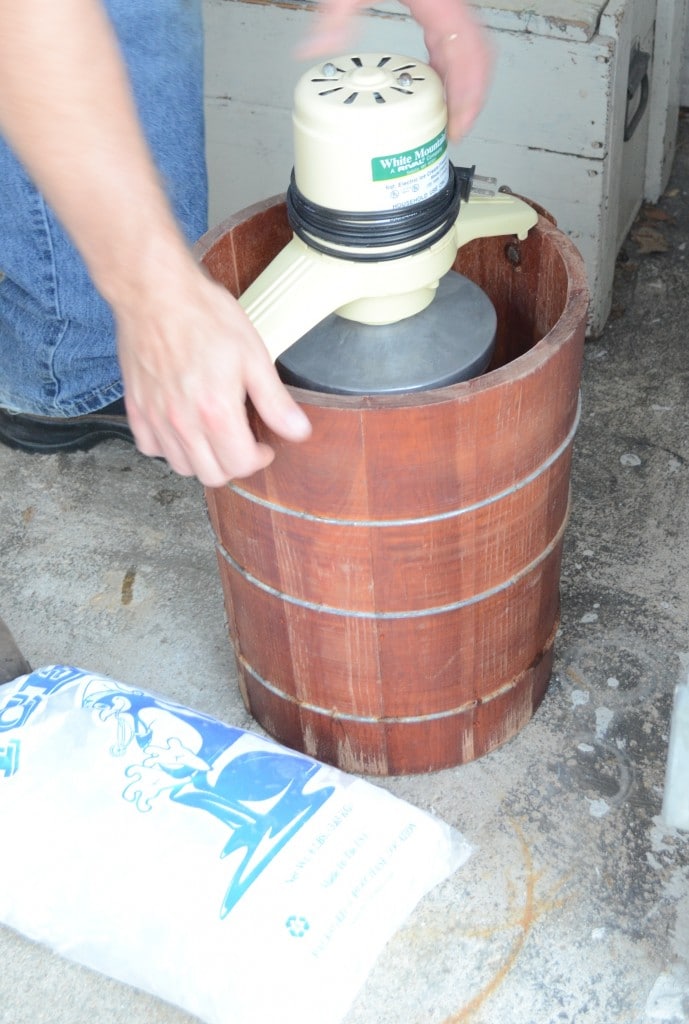 Place ice cream can in bucket, attach motor, plug it in, add ice and salt, and sit back and let it freeze!  Our ice cream freezer is an electric White Mountain freezer. 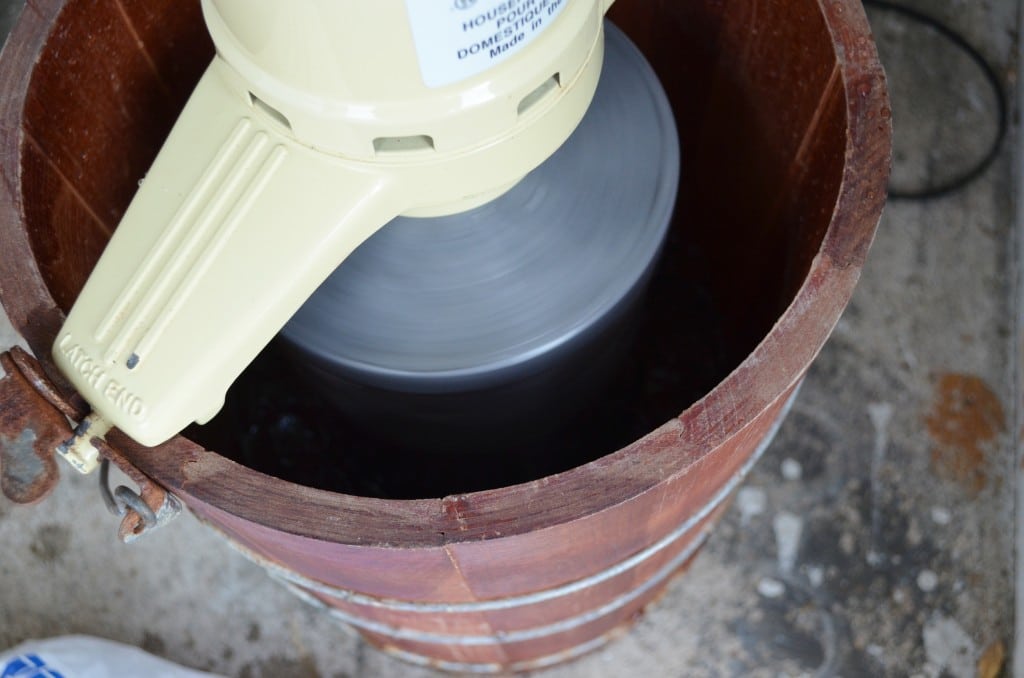 Trav soaks our wooden bucket by letting it stand with water in it for a while.  He doesn’t do this every time but often enough to keep the bucket from getting too dried out.  You don’t want all the water from the melting ice to just run out – slows down your freeze time. 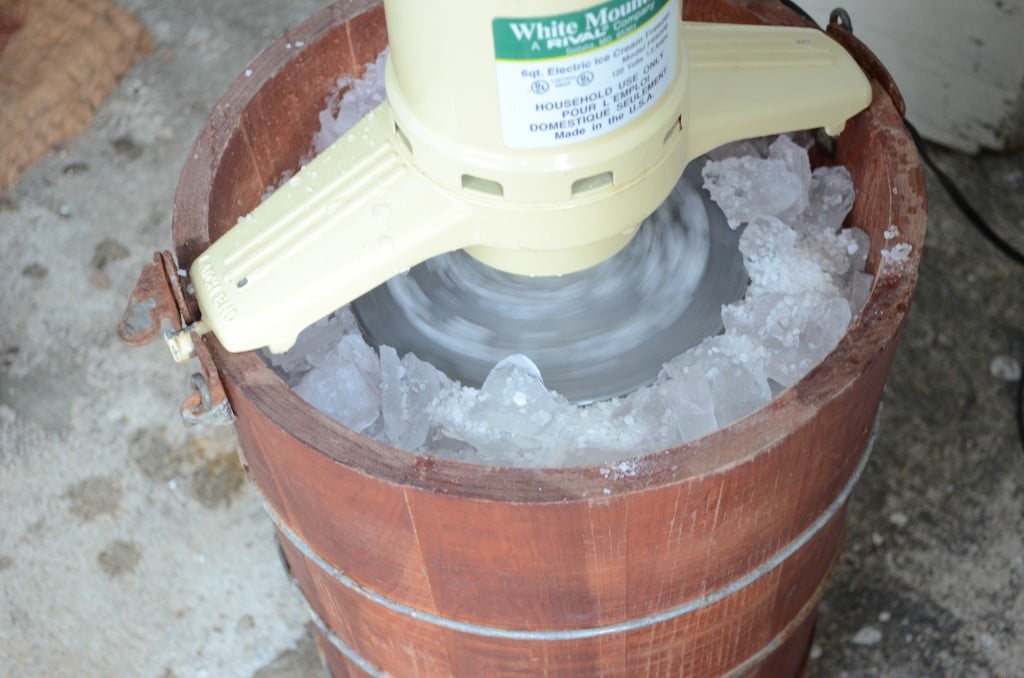 Layer your freezer bucket with ice and rock salt.  Use plenty of salt – a layer of ice, a layer of salt, layer of ice, layer of salt…  you get the picture.  You can also fill the bucket with water from the garden hose after layering it full of ice and salt if you want a really fast freeze.  Trav has frozen ice cream in about 15 minutes before, maybe less.  I’ve never actually timed it.  Ice cream is frozen and ready to eat when the motor is pulling hard. 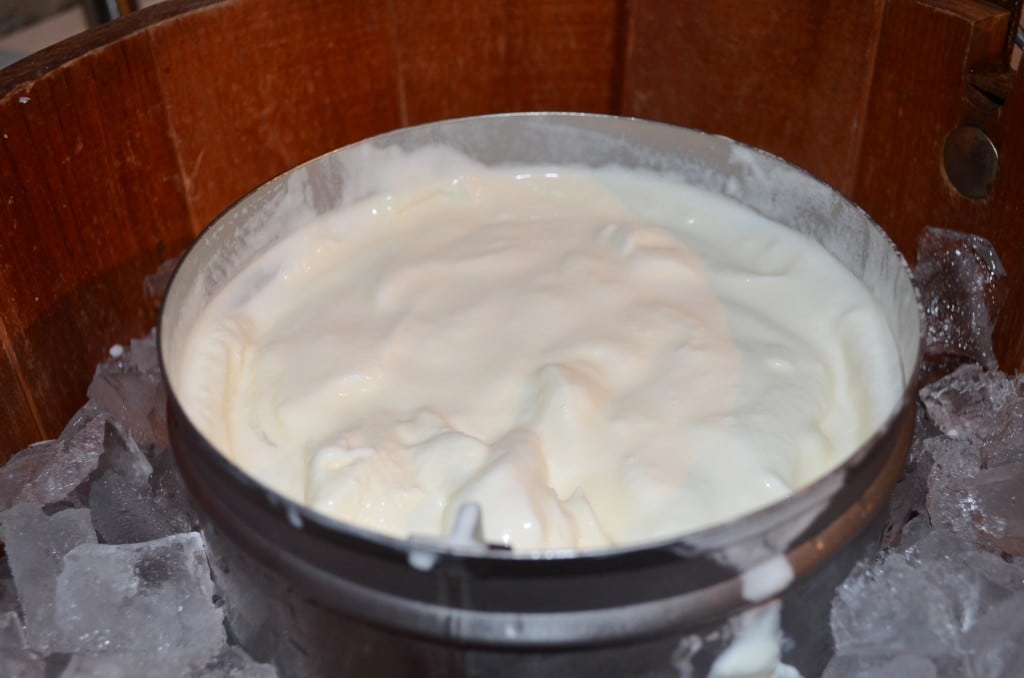 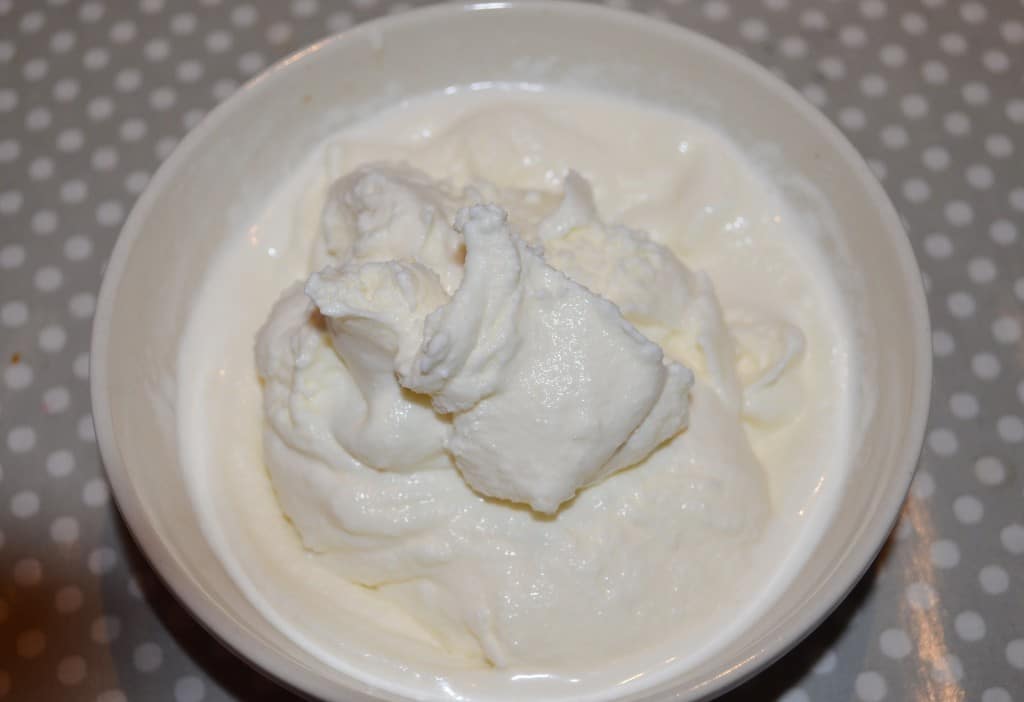 It is a standing joke that if you ask Travis to bring ice cream to an event or gathering you don’t have to ask what kind he will bring.  He always makes vanilla!  But think about it!  Oh the things you can do with plain old vanilla ice cream!!  You can add whatever toppings you wish.  It is wonderful with pie or cake or any dessert you want to put with it.  And best of all the leftovers can be made into any kind of shake you want!  Any other flavor of ice cream is just leftover ice cream.  Vanilla takes on a life of its own when you add the berries that are in season.  Or creamy peanut butter.  Throw some toasted wheat germ on top, add bananas, chocolate syrup, the list is endless!  Never again will you call it ‘JUST VANILLA’!! 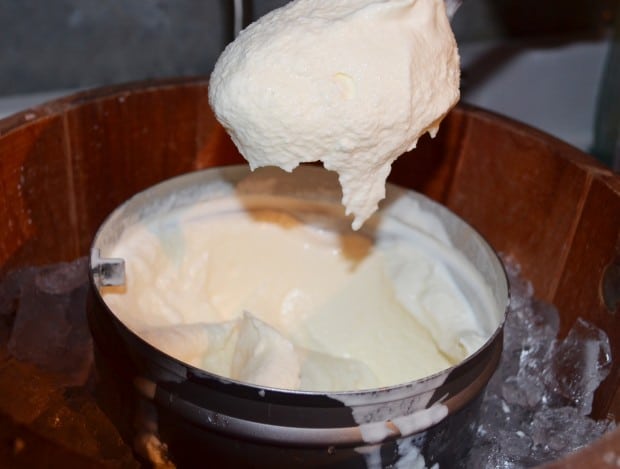 This ice cream recipe is thick too, not runny like some recipes I’ve had.  I was never a huge ice cream lover but this stuff is awesome and I would recommend this recipe to anyone 🙂 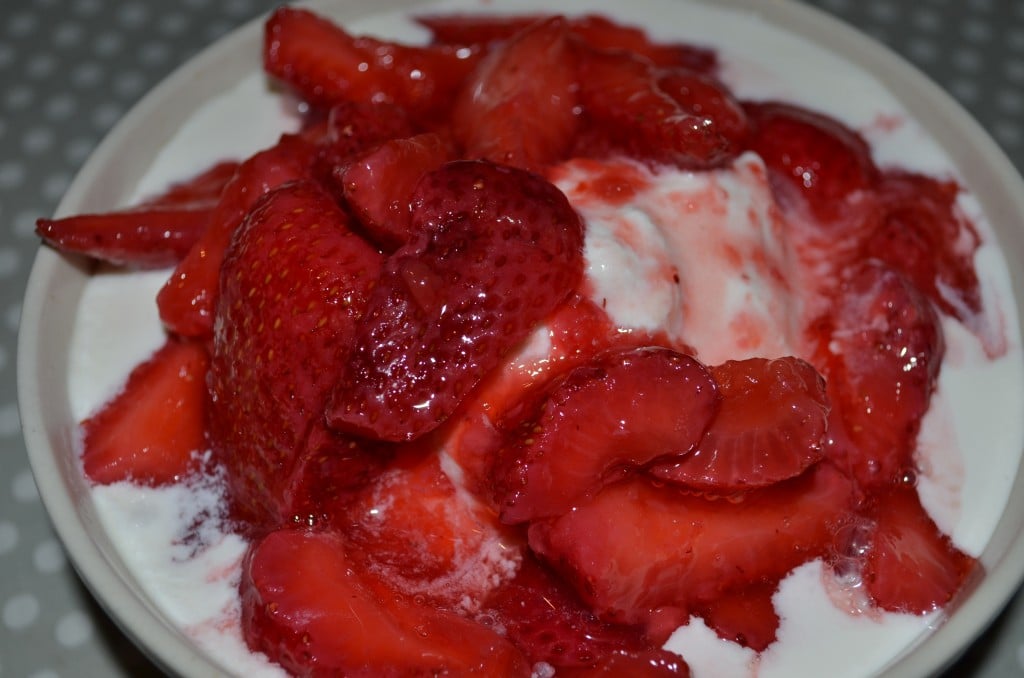 This particular batch coincided with some delicious fresh strawberries.

A chocolate version of this ice cream recipe can be obtained by using chocolate pudding instead of vanilla.  Tastes a lot like Wendy’s frostys.  One variation we do convince Trav to make occasionally is Oreo.  I use a little over half a pack of Oreos.  I break them slightly – you really don’t have to break them much at all – they will break up on their own and mix through just fine.

*links are my affiliate.

Sign up for all the Strawberries and Cream from Sew a Fine Seam! (discounts, news, product launches, info and more!)
« Hostess Gift
Independence »