On Saturday mornings my husband likes to have a big breakfast. He doesn’t always get it (most times not in fact) but he does enjoy a big breakfast.  Everyone likes pancakes around here but most times I am just too lazy to make them.  A quicker, easier route is  French Toast! 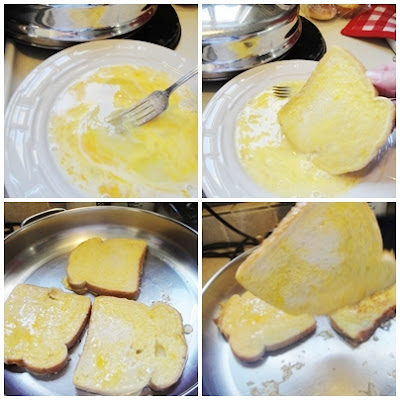 Put eggs and a small amount of milk (cream if you have it!) in a pie plate.
Or if you are really lazy just grab a dinner plate and make that work.
Dip slices of bread in egg/milk(cream) mixture.
Place dipped bread in a HOT (300 to 350 degree) skillet.
You should put about a Tablespoon or 2 of oil in the skillet first.
If you don’t your French Toast will be extra toasty.
Flip over just like pancakes when the first side is done. 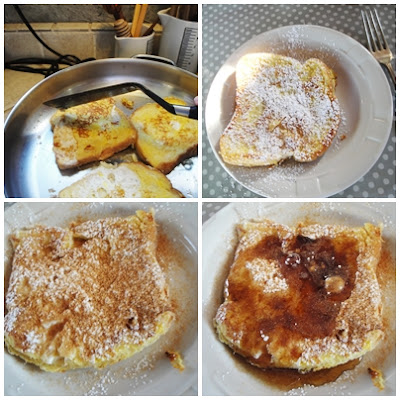 When the French Toast is nicely browned on both sides remove from skillet.
Top with powder sugar.  Or cinnamon and sugar.  Or syrup.
Or powdered sugar AND cinnamon &sugar.
Or ALL THREE:)  That’s what Little Sister did:) 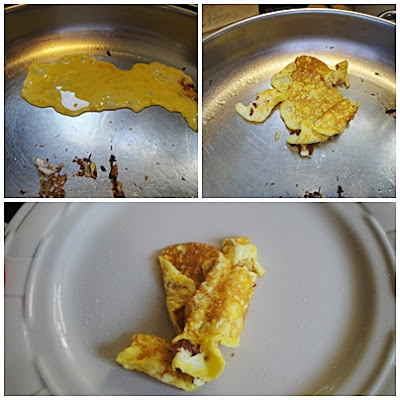 After the French Toast is all made there is usually a little bit of the egg/milk(cream) mixture left.
Put it in the skillet.  Turn.  Remove from skillet to plate.  Salt.  Eat.  Close eyes and sigh at the yumminess.  ( this is NOT the same as scrambled eggs)

Sign up for all the Strawberries and Cream from Sew a Fine Seam! (discounts, news, product launches, info and more!)
« These are the Best Years of Our Lives
~Little Girls and Lollipops~ »