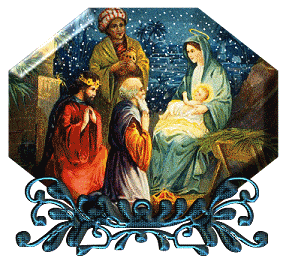 (the following was taken from a friends blog
http://www.appleseeds.org/Christmas-quotes.htm.
Go here to my friends blog.)
“There is no evidence of any kind regarding the date of Jesus’ birth. His nativity began to be celebrated on Dec. 25 in Rome during the early part of the fourth century (AD 336) as a Christian counterpart to the pagan festival, popular among the worshipers of Mithras, called Sol Invictis, the Unconquerable Sun. At the very moment when the days are the shortest and darkness seems to have conquered light, the sun passes its nadir. Days grow longer, and although the cold will only increase for quite a long time, the ultimate conquest of winter is sure. This astronomical process is a parable of the career of the Incarnate One. At the moment when history is blackest, and in the least expected and obvious place, the Son of God is born…”
-Joe E. Pennel Jr.
(the following I found here)

For the church’s first three centuries, Christmas wasn’t in December—or on the calendar at all.
Elesha Coffman
It’s very tough for us North Americans to imagine Mary and Joseph trudging to Bethlehem in anything but, as Christina Rosetti memorably described it, “the bleak mid-winter,” surrounded by “snow on snow on snow.” To us, Christmas and December are inseparable. But for the first three centuries of Christianity, Christmas wasn’t in December—or on the calendar anywhere.
If observed at all, the celebration of Christ’s birth was usually lumped in with Epiphany (January 6), one of the church’s earliest established feasts. Some church leaders even opposed the idea of a birth celebration. Origen (c.185-c.254) preached that it would be wrong to honor Christ in the same way Pharaoh and Herod were honored. Birthdays were for pagan gods.
Not all of Origen’s contemporaries agreed that Christ’s birthday shouldn’t be celebrated, and some began to speculate on the date (actual records were apparently long lost). Clement of Alexandria (c.150-c.215) favored May 20 but noted that others had argued for April 18, April 19, and May 28. Hippolytus (c.170-c.236) championed January 2. November 17, November 20, and March 25 all had backers as well. A Latin treatise written around 243 pegged March 21, because that was believed to be the date on which God created the sun. Polycarp (c.69-c.155) had followed the same line of reasoning to conclude that Christ’s birth and baptism most likely occurred on Wednesday, because the sun was created on the fourth day.
The eventual choice of December 25, made perhaps as early as 273, reflects a convergence of Origen’s concern about pagan gods and the church’s identification of God’s son with the celestial sun. December 25 already hosted two other related festivals: natalis solis invicti (the Roman “birth of the unconquered sun”), and the birthday of Mithras, the Iranian “Sun of Righteousness” whose worship was popular with Roman soldiers. The winter solstice, another celebration of the sun, fell just a few days earlier. Seeing that pagans were already exalting deities with some parallels to the true deity, church leaders decided to commandeer the date and introduce a new festival.
Western Christians first celebrated Christmas on December 25 in 336, after Emperor Constantine had declared Christianity the empire’s favored religion. Eastern churches, however, held on to January 6 as the date for Christ’s birth and his baptism. Most easterners eventually adopted December 25, celebrating Christ’s birth on the earlier date and his baptism on the latter, but the Armenian church celebrates his birth on January 6. Incidentally, the Western church does celebrate Epiphany on January 6, but as the arrival date of the Magi rather than as the date of Christ’s baptism.
Another wrinkle was added in the sixteenth century when Pope Gregory devised a new calendar, which was unevenly adopted. The Eastern Orthodox and some Protestants retained the Julian calendar, which meant they celebrated Christmas 13 days later than their Gregorian counterparts. Most—but not all—of the Christian world now agrees on the Gregorian calendar and the December 25 date.
The pagan origins of the Christmas date, as well as pagan origins for many Christmas customs (gift-giving and merrymaking from Roman Saturnalia; greenery, lights, and charity from the Roman New Year; Yule logs and various foods from Teutonic feasts), have always fueled arguments against the holiday. “It’s just paganism wrapped with a Christian bow,” naysayers argue. But while kowtowing to worldliness must always be a concern for Christians, the church has generally viewed efforts to reshape culture—including holidays—positively.
As a theologian asserted in 320, “We hold this day holy, not like the pagans because of the birth of the sun, but because of Him who made it.”
(color changes and bold print are mine.)

Sign up for all the Strawberries and Cream from Sew a Fine Seam! (discounts, news, product launches, info and more!)
« Choose Joy~~~
{No Room In The Inn} »