We really haven’t had ‘Indian Summer’ this year.
Think we might still get one???
I would be ecstatic if November turned out WARM.  Really warm.  Really Really warm would suit me just fine:) 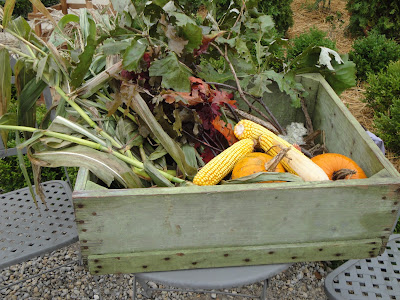 I found the following information interesting.  Thought I would share!

An Indian summer is a meteorological phenomenon that occurs in the autumn. It refers to a period of considerably above normal temperatures, accompanied by dry and hazy conditions, usually after there has been a killing frost. Depending on latitude and elevation, the phenomenon can occur in the Northern Hemisphere between late September and mid November
The modern use of the term is when the weather is sunny and clear, and above 70 °F, after there has been a sharp frost; a period normally associated with late-October to mid-November.

The expression ‘Indian summer’ has been used for more than two centuries. The earliest known use was by French-American writer John Hector St. John de Crevecoeur in rural New York in 1778: “Then a severe frost succeeds which prepares it to receive the voluminous coat of snow which is soon to follow; though it is often preceded by a short interval of smoke and mildness, called the Indian Summer.” There are several theories as to its etymology:
Why Indian? Well, no one knows but, as is commonplace when no one knows, many people have guessed. Here are a few of the more commonly repeated guesses:

Sign up for all the Strawberries and Cream from Sew a Fine Seam! (discounts, news, product launches, info and more!)
« Inspiration
Autumn Decor »