Remember playing ‘musical chairs’ as a child? There are enough chairs for all but one person. When the music stops everyone dashes for a seat. The one left standing is ‘out’.
Well, I’ve been playing ‘musical furniture lately’.
Moving things around, trying it here… nah, it needs to go there…
this will sit here till this other project is done, then it can go over there…
That sort of thing. Anyone know what I’m talking about?? 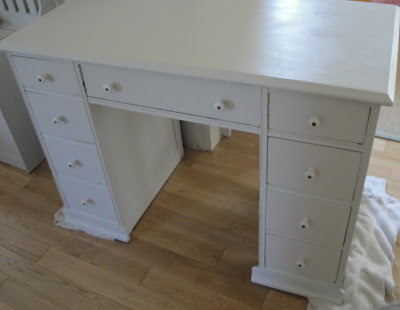 This desk finally moved out of the living room a few months ago and now resides in Big Sister’s closet. She loves having it there. And I still need to take pictures of it where it is now. I’m waiting on the closet to be neat and tidy. So don’t hold your breathe on seeing those pics anytime in this decade. Big Sister is 12. And a half. I knew you would understand!! 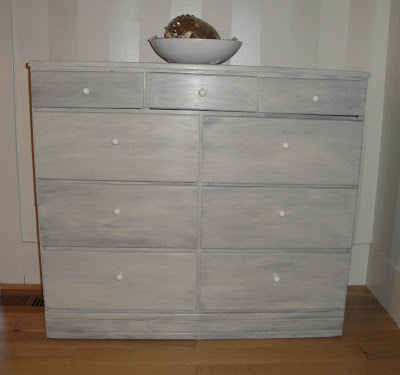 This dresser also went with Big Sister to her new room – from the dining room. 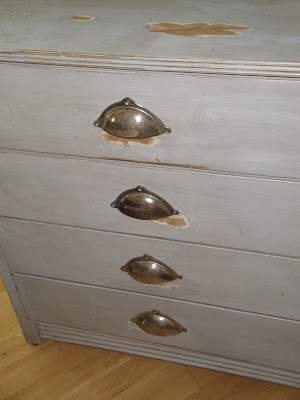 This dresser (which is a favorite of mine) took the place of the one in the dining room.  This one had been in the bathroom. 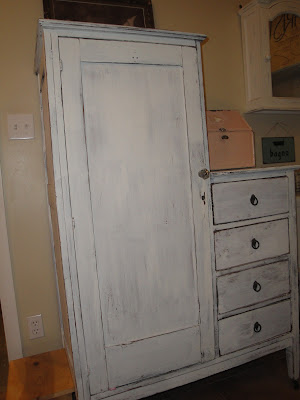 This took the spot in the bathroom.
It had been my dresser.
I have been without a dresser for awhile.
Till now.
More on that in a little. 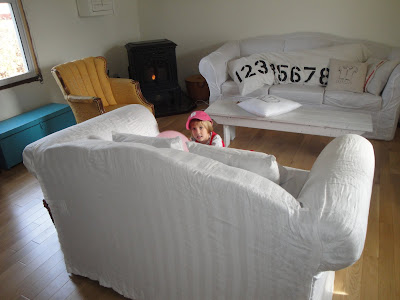 This is the furniture that was the ‘last one standing’ in this game of ‘musical furniture’.
It was ‘out’!
Couch and Love Seat had to leave the game.  They now reside at the home of a friend who needed some more furniture.  And I’m sure they are enjoying themselves there immensely!
You see, we acquired a piece of furniture that is truly musical! 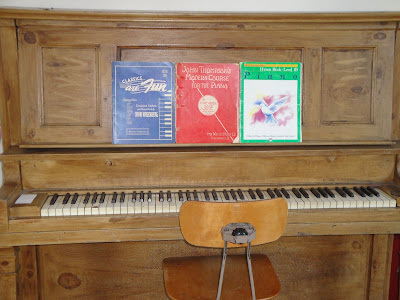 This old upright piano!  We are all so thrilled with it.
And that is a story in itself for another day, another time, another post! 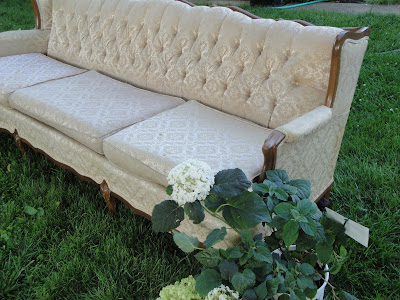 Because we sent the Couch and Love Seat packing we needed something to sit on.
Enter this lovely piece.  Lovely is said tongue-in-cheek.
Really I do love the shape and size of this thing and it is pretty comfy:)
It’s covered with quilts right now that always need repositioned.
The plan is to reupholster it.
And eventually sell it and get what we REALLY want. 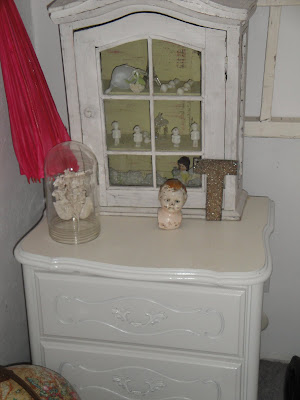 So.  Game ended for awhile but if you were following closely you will remember that I am now w/out a dresser.  And it’s been a few months.  Not ideal but I just closed my eyes to the fact that I had stacks of clothes on the floor beside my bed.
We had a dresser stored in the basement that matched the table above.  Travis uses this little table as a night stand.  Plan was to paint the dresser to match and I would use it.
But… when we pulled it out of the basement it was rather moldy inside.  So it went to the curb to await the trash truck.  Guess it got left standing too!

The other night in the middle of the night I had a brainstorm.
Also in the basement was a bookshelf that had played it’s own game of ‘musical furniture’.
I had been thinking I would get rid of it since I didn’t have anywhere to put it anymore.  That’s before I thought outside the box and considered it more than just a bookshelf.  And I needed a dresser remember?
So this dresser above, is now sitting in my bedroom ready to get my clothes off the floor.
And in the dining room, where this had been is …. 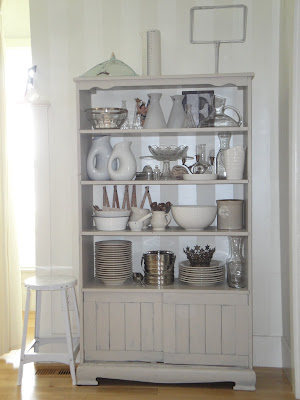 …This!!!!
We pulled that bookshelf out of the basement where it was languishing, cleaned off the spiders and webs and dust, and then – I pulled the back off.  The back was several thin layers of veneer which had not stayed very flat.  And I like it so much better without the back anyway.  Takes away the ‘bookshelf’ look and gives it a more ‘open shelving’ look.  And I’m loving having my stuff easily accessible and on display.  I haven’t been this excited about a redo for a long time.  I just love the game of ‘musical furniture’!  When it turns out this great anyway:) 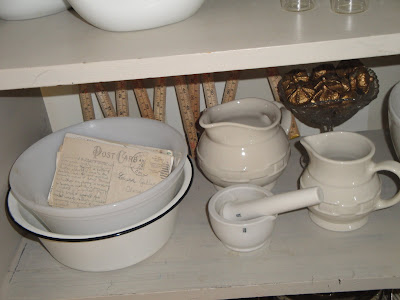 Old post cards are so fun to decorate with.
Love the old mortar and pestle from the science lab of an old school. 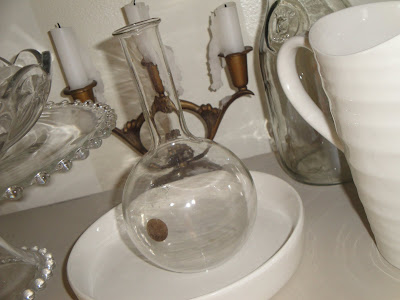 Old flask from the science lab of a school. (Thanks Kara!) 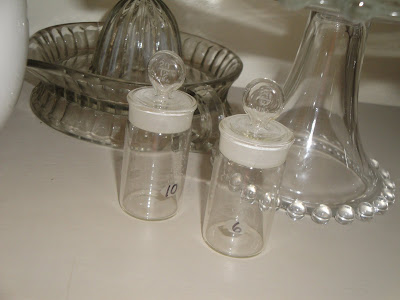 More old jars from the science lab. (again, thanks to Kara:) 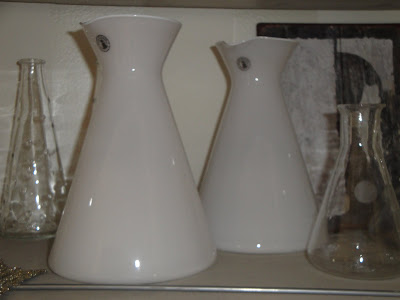 Love these white pitchers.  They are going to help me outfit my booth for the
“Brick Farmhouse Event”!! 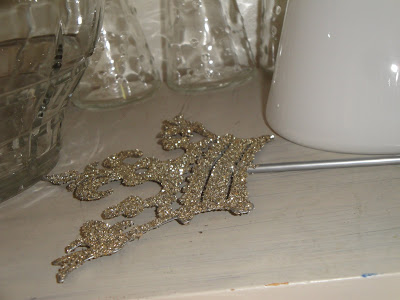 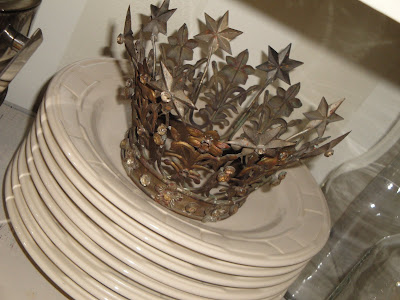 This crown is one of my very favorite things (I’m sure I’ve told you that before)
It’s fun having it in a spot that it really shows up against all the shades of white. 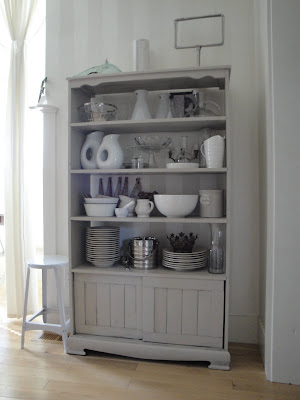 And another pic of the whole thing – just because I think it’s fun and I like it so much:)
I really need a new camera.  Mine just doesn’t do too well at these full shots since it’s little trip to the floor.
Jill

Sign up for all the Strawberries and Cream from Sew a Fine Seam! (discounts, news, product launches, info and more!)
« Little Sister likes to pose for the camera.
I want a MAC »