A seamstress is only as good as her iron.
There was a time when my Mom would not have thought I would ever say that.  I detested ironing.  To put it mildly.  What was the big deal?  What was the point of pressing your seams before moving on in your sewing project?  Just turn the seam the same direction at both ends when sewing it into the next seam and iron everything at once when you got finished.  Yeah.  I once thought that.  And I proceeded to test my theory.  Mom was right.  IT IS VERY IMPORTANT TO PRESS YOUR SEAMS!!!!!!!!!!!!!
I think it was an author in Martha Pullen’s magazine ‘Sew Beautiful’ who said “your iron will be your most important tool”.  She was right.  I cannot end up with a quality finished job if I do not do the proper pressing at the proper times.
I still hate ironing clothes.  I dash through the few things we need for Sunday morning, ON Sunday morning.  I iron an outfit or shirt when necessary.  But I do NOT spend my Tuesday ironing clothes along with all the towels and bedsheets.  Just don’t have it in me.  Besides, I tend to not get all the laundry done on Monday anymore:) 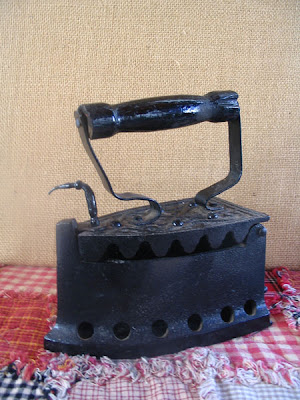 So thankful I’m not placing this on a hot, wood burning stove every time I’m sewing! 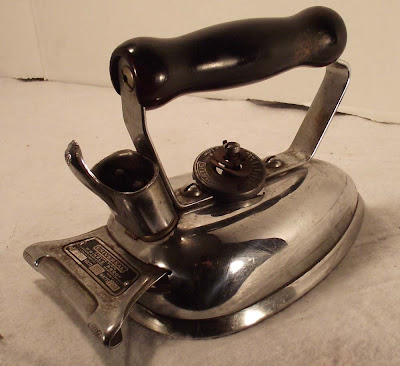 This one looks a little more up and coming, might be able to put water in it to have some steam?
That’s another thing about irons.  THEY MUST HAVE STEAM.  Pressurized steam is by far superior.  I HIGHLY recommend it even if you don’t sew.  Your clothes will look like they came from being pressed at the cleaners.  Or better. 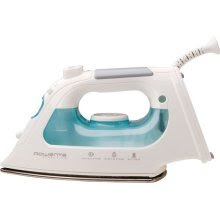 I started out with one of these.  And I wore it out in less than 2 years.  I have been through so many irons I have totally lost count.  I’ve had several Rowenta’s.  They are good irons, I just can’t seem to get them to last.  I’ve tried cheap, I’ve tried expensive, I have decided I am just too hard on them. 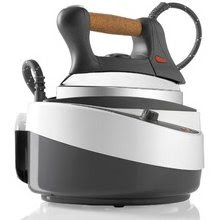 Eventually I spent the $$ on a pressurized steam iron from Reliable.  It looked similar to this one but didn’t have the cork handle.  It lasted 2 years which was over twice as long as the non-pressurized had been lasting.  I think it cost $159.
By now, I was hooked on the pressurized steam.  Wouldn’t consider anything else. 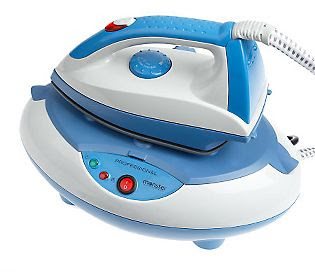 This time around I tried this one for about $50.  It lasted around a year to a year and a half.  I ordered another one that was supposed to be like the Reliable I’d had before and when it arrived guess what was in the box!  Another iron just like this one.  I was not happy.  But I’m using it and for now it’s working.  My husband and I have decided that the way I use an iron is too hard on them, they get too hot for too long.  When I sew, my iron is on.  And most times it is on for hours if not all day long.  I think these irons just are not made for that kind of use.  I would HIGHLY recommend the Reliable if you can spend the $$.  If not go for the Euro Monster.  Especially if you mainly just iron most of your clothes at the same time, once a week or so. 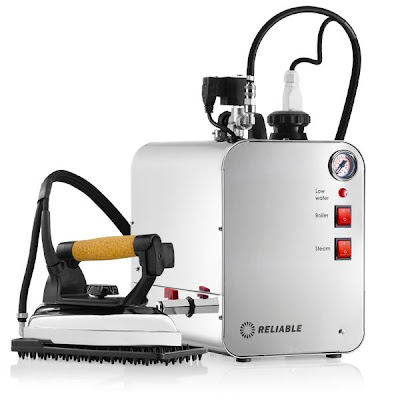 This is the iron I want now.  It is $899.  The boiler tank holds over a gallon of water, it gives over 6 hours of continuous steam and is rated for unlimited use per day.  I’m hoping I can swing that price the next time my iron bites the dust.  This thing is a must.
After all, a seamstress is only as good as her iron:)

Sign up for all the Strawberries and Cream from Sew a Fine Seam! (discounts, news, product launches, info and more!)
Be the first to know about new tapestry wall hangings, boho throw pillows, seasonal home decor and more.
« Dressed for a Wedding
So Excited… »